Basketball legend Kobe Bryant is among nine people who died in a helicopter crash in the wealthy Southern California residential neighborhood of Calabasas, ABC News has confirmed.

There were no survivors in the crash around 10 a.m. local time Sunday, fire officials said in a press conference.

Orange Coast College head baseball coach John Altobelli was also on board the aircraft, the school said in a statement. The family later confirmed Altobelli's wife, Keri, and daughter, Alyssa, were also among those killed. 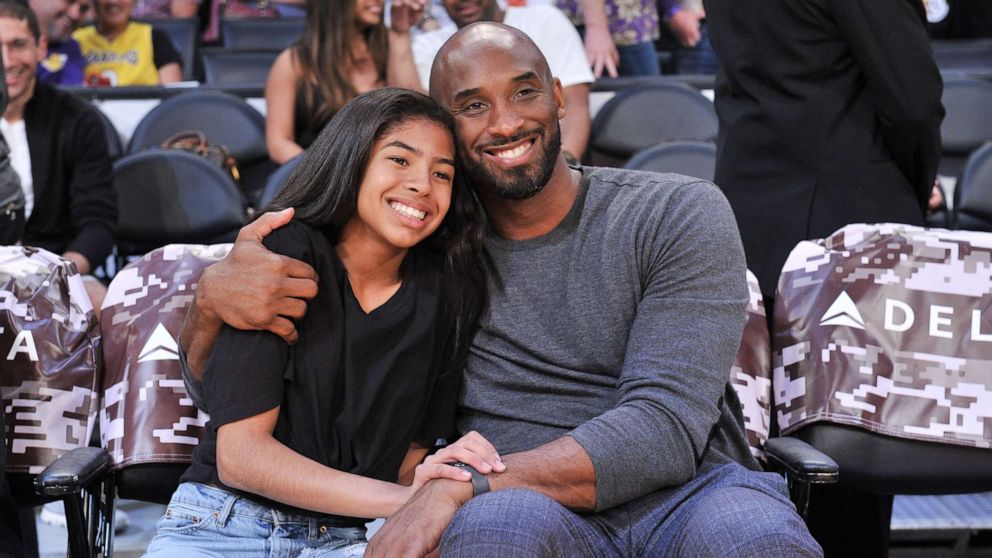 The names of the other victims will not be publicly identified until next-of-kin are notified, Los Angeles County Sheriff Alex Villanueva told reporters.

"God bless their souls," Villanueva said, adding that members from the coroner's office are on their way to assist in the recovery of the remains.

The Sikorsky S-76 helicopter crashed under unknown circumstances, a spokesperson from the National Transportation Safety Board told ABC News. Firefighters worked to contain the quarter-acre brush fire that resulted, which was difficult to extinguish due to the presence of magnesium, which reacts to oxygen and water, Los Angeles County Fire Chief Daryl Osby told reporters. 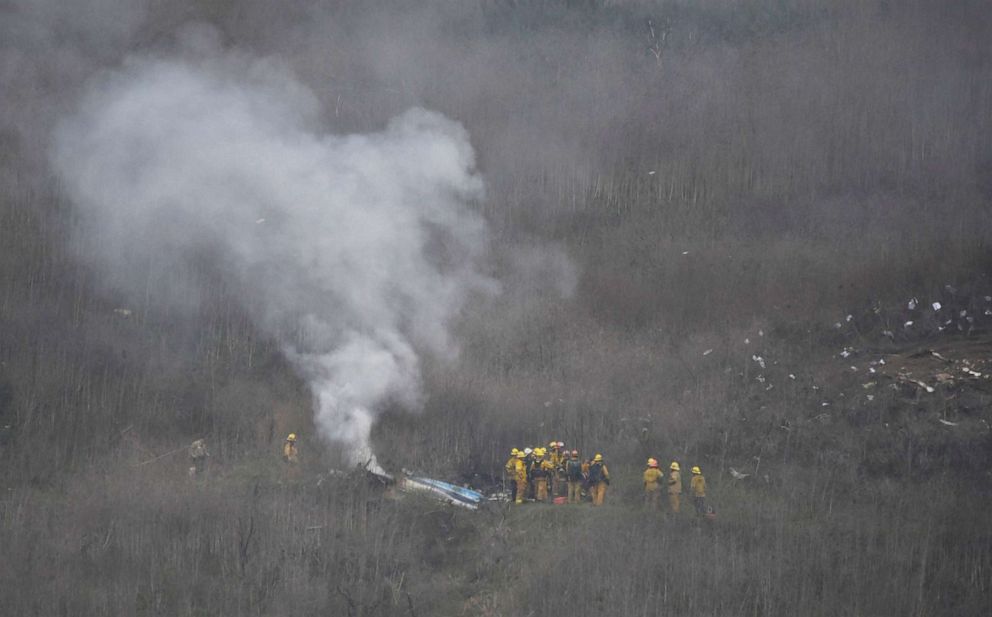 Gene Blevins/Reuters
LA county firefighters on the scene of a helicopter crash that killed Kobe Bryant in Calabasas, Calif., Jan. 26, 2020.

The debris from the aircraft was scattered on steep terrain, Osby said. Paramedics on board an air ambulance were hoisted down to the scene but were not able to locate any survivors, he added.

Witnesses who were mountain biking in the area saw the helicopter in distress, Los Angeles County Fire Capt. Tony Imbrenda told reporters. It is not known whether the pilot alerted over radio that the aircraft was in distress, Imbrenda said. 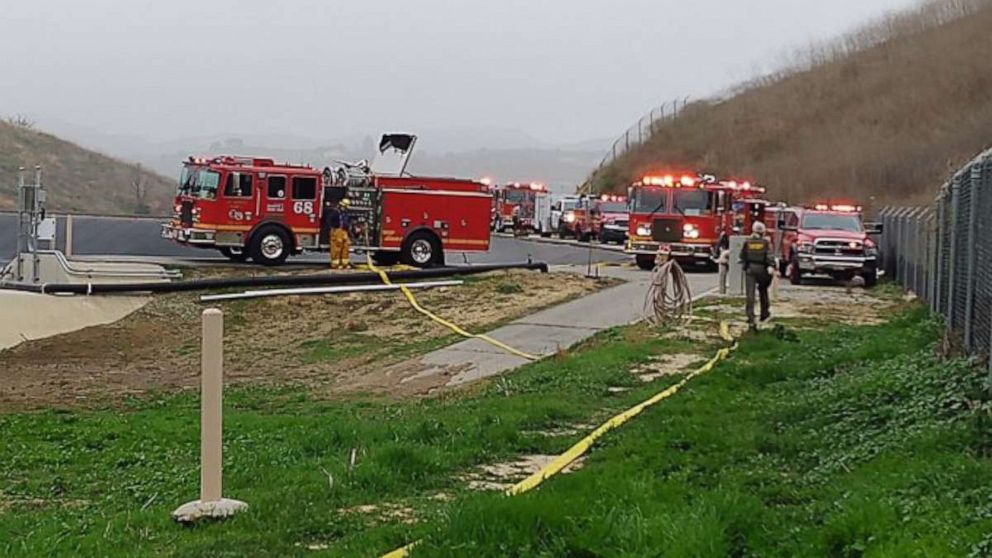 It is unclear who the helicopter belonged to or where it originated from and was going to. The National Transportation Safety Board and Federal Aviation Administration are investigating the crash.

The FBI will also be helping the NTSB in its investigation because it has evidence response teams.

While the cause of the crash is still unclear, the Los Angeles Police Department told ABC News it was not flying choppers on Sunday morning since the weather, specifically visibility, did not meet LAPD’s standards for flying. 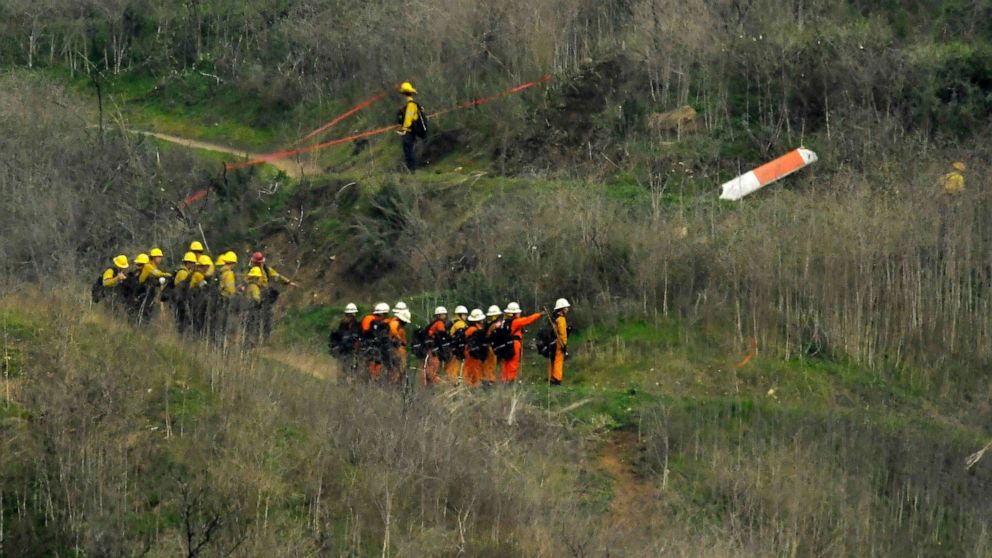 Bryant was drafted to the NBA out of high school in 1996 and spent his entire 20-year career with the Los Angeles Lakers, winning five NBA championships. He was awarded NBA MVP in 2008 and NBA Finals MVP in 2009 and 2010. 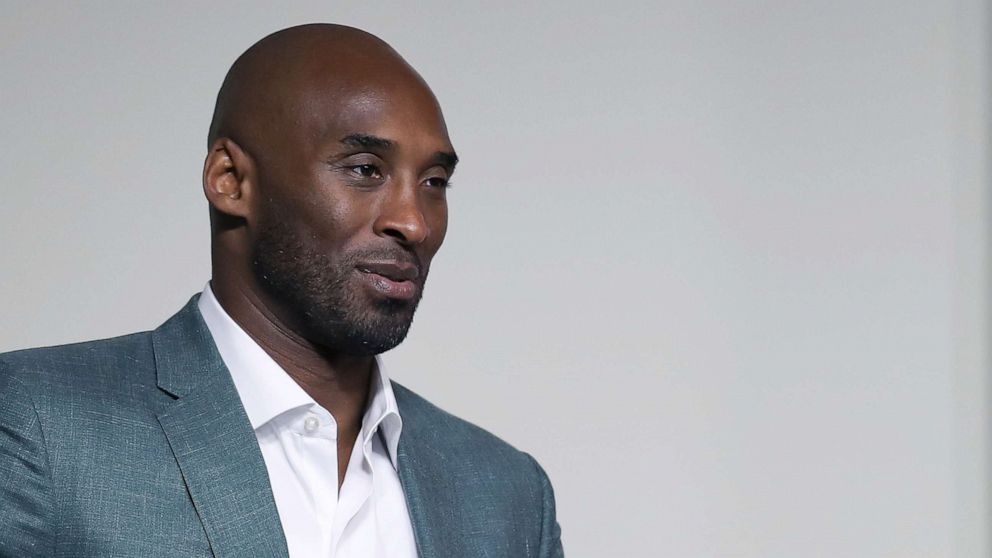 Lintao Zhang/Getty Images
Kobe Bryant talks to the media after the game of Team Spain against Team Australia during the semi-finals of 2019 FIBA World Cup, Sept. 13, 2019, in Beijing, China.

LeBron James surpassed Bryant on the all-time scoring list on Saturday during the Lakers' game against the Philadelphia 76ers.

Bryant tweeted at James congratulating him on beating his record.

Continuing to move the game forward @KingJames. Much respect my brother 💪🏾 #33644

In 2018, Bryant won an Academy Award for his animated short "Dear Basketball," based on a poem he wrote in 2015 when he announced his retirement.

Bryant told "Good Morning America" anchor Robin Roberts in December 2015 that he wrote a letter to his fans upon retirement because he wanted to show how much they meant to him.

"The letter itself still doesn't do it justice and how important they've been -- how vital they've been in my career," he said. "And I mean, we grew up together. And that's such a beautiful thing."

Bryant was embroiled in controversy during a 2005 trial when he was accused of sexual assault by an employee at a Vail, Colorado, hotel. Bryant always denied the encounter was nonconsensual and the case was later dismissed after the victim said she did not want to testify and the two parties settled a civil suit 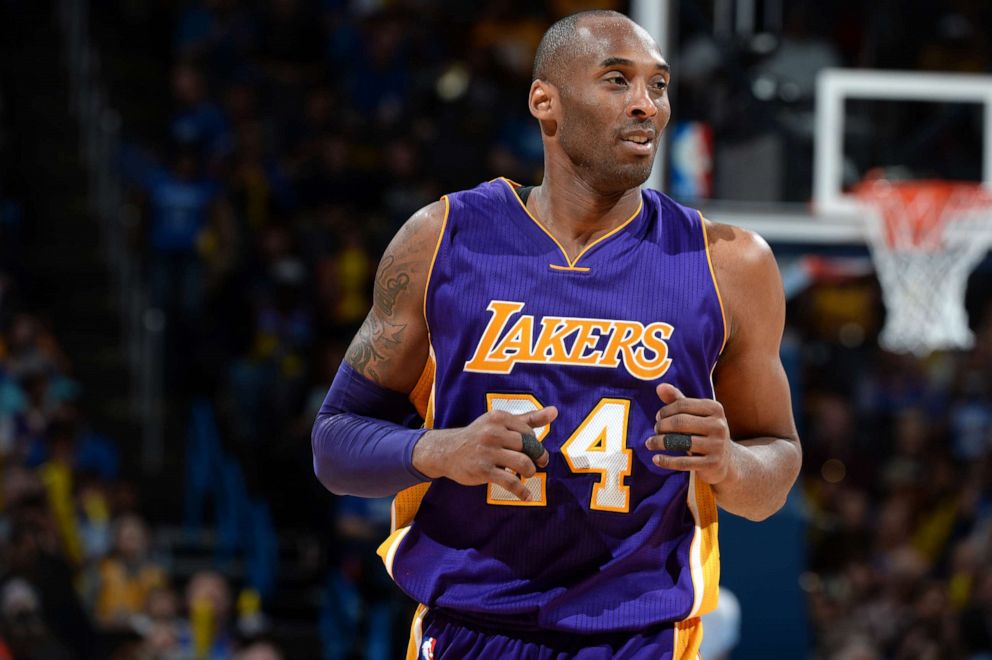 Andrew D. Bernstein/NBAE via Getty Images
Kobe Bryant #24 of the Los Angeles Lakers is seen during the game against the Oklahoma City Thunder, April 11, 2016, in Oklahoma City, Okla.

Silver said in a statement that the "NBA family is devastated by the tragic passing" of Bryant and his daughter and offered condolences to Bryant's wife, Vanessa, and their family.

"For 20 seasons, Kobe showed us what is possible when remarkable talent blends with an absolute devotion to winning," Silver's statement read. "He was one of the most extraordinary players in the history of our game with accomplishments that are legendary: five NBA championships, an NBA MVP award, 18 NBA All-Star selections, and two Olympic gold medals. But he will be remembered most for inspiring people around the world to pick up a basketball and compete to the very best of their ability. He was generous with the wisdom he acquired and saw it as his mission to share it with future generations of players, taking special delight in passing down his love of the game to Gianna."

MORE: Remembering Kobe Bryant: Basketball legend opens up about being a father and his new children's book

Los Angeles Mayor Eric Garcetti described Bryant in a statement as a "giant who inspired, amazed, and thrilled people everywhere with his incomparable skill on the court -- and awed us with his intellect and humility as father, husband, creative genius, and ambassador for the game he loved."

"He will live forever in the heart of Los Angeles, and will be remembered through the ages as one of our greatest heroes," Garcetti said. "This is a moment that leaves us struggling to find words that express the magnitude of shock and sorrow we are all feeling right now, and I am keeping Kobe's entire family in my prayers at this time of unimaginable grief."

The Lakers' next game will be against the Los Angeles Clippers Tuesday at the Staples Center at 7 p.m. PT. 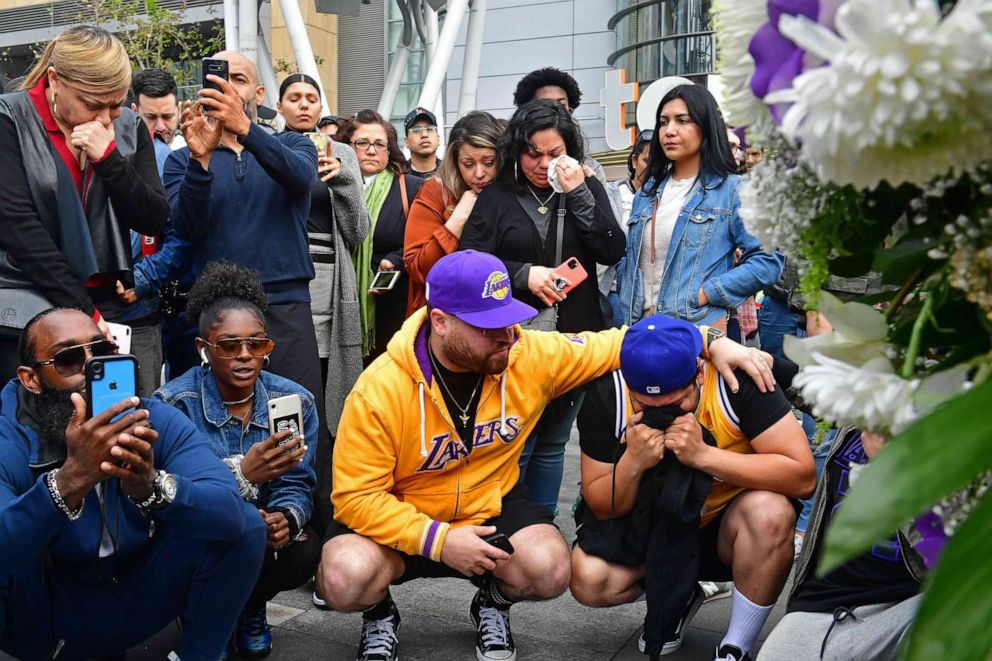 Fans flocked to the scene of the crash, the Staples Center and the Kobe Bryant Gymnasium at the Lower Merion High School in Ardmore, Pennsylvania, where Bryant played basketball prior to being drafted, to mourn the fallen NBA star.

In a statement, the school praised Bryant to raising "the profiled of the high school" and the school district, according to ABC Philadelphia station WPVI. Bryant led the team to the 1996 state championship.

"Our school community will always be grateful for his ongoing generosity to his alma mater, including his dedication of our Kobe Bryant Gymnasium and his support of our boys' and girls' basketball teams. 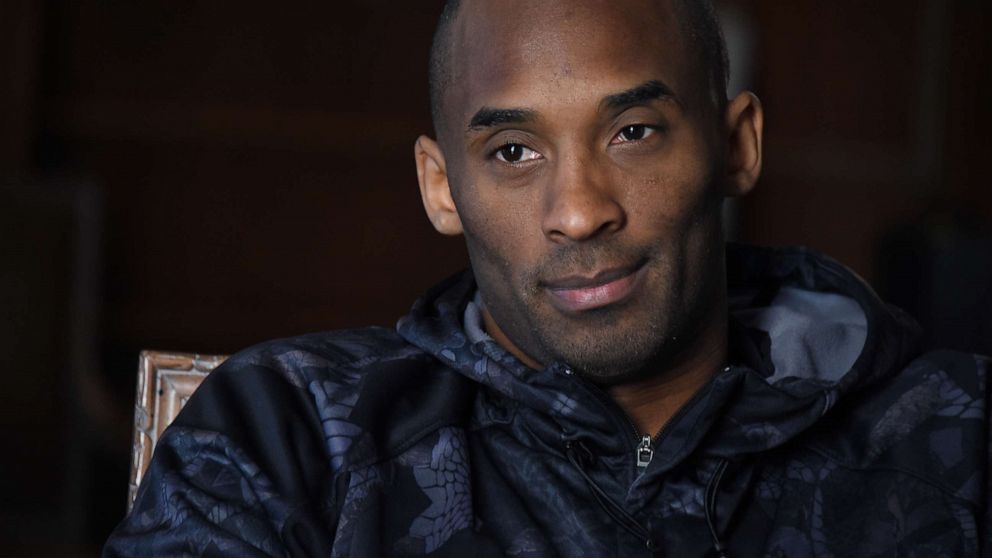 The NBA Player's Association wrote in a statement that it was "stunned and devastated" by the news of Bryant's death.

"Words cannot express his impact on our Players, the NBA and the game of basketball," the statement read. "This is a monumental loss for the entire basketball community and our hearts are quite simply broken. We send love and prayers out to his wife Vanessa and the entire family."