An American family living in Poland is doing what it can to help Ukrainian refugees in need amid the war.

In February, OT and Julie Benson and five of their eight kids moved from the Detroit suburbs to Krakow, Poland, looking for an adventure. But nearly a month after arriving in Poland, their lives changed instantly when Russia invaded Ukraine.

The couple told “Good Morning America” that they couldn’t turn a blind eye.

“When you’re staring [at] refugees who have been traveling for many days, and they have nothing but the clothes on their backs, you don’t really make a plan, you just say yes, and I’ll figure it out,” OT Benson said.

It was at a church during those first few days of the war when OT decided to heed the Bishop’s call to house Ukrainian refugees in his own home. 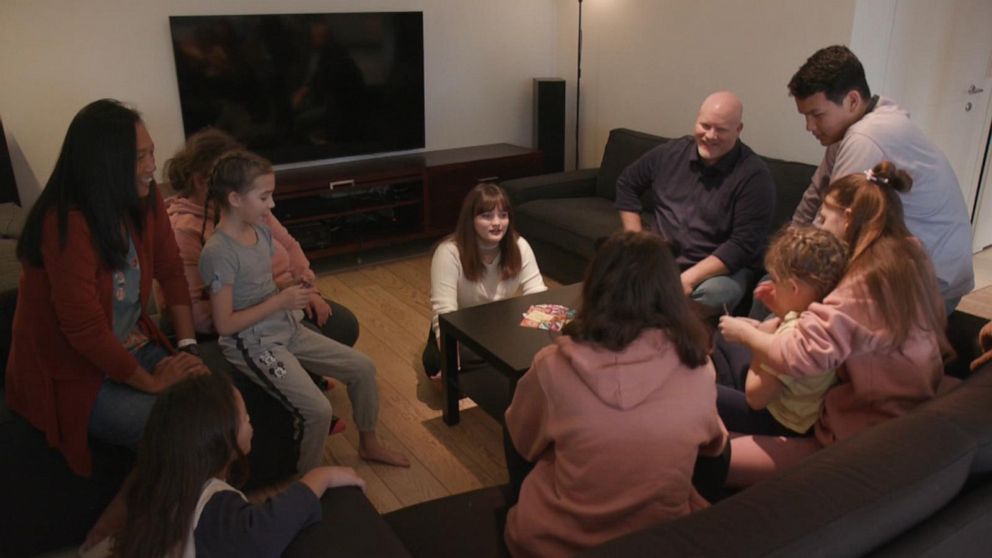 Over the past four weeks, the Benson’s house has been a home for at least nine families -- some staying the night, others for weeks. At one point, OT and Julie packed the house with 21 people.

“Our job is trying to make them feel safe,” Julie Benson said. “Make them feel like they’re with us, that they are like at their home. So that’s what we’re trying to do. And every day see them happy, smiling -- I think that is the best reward.”

The couple’s daughter, Leo, said she was nervous at first living in a full house, but she said welcoming their home to those in need was humbling.

“We had our first group of people stay with us, and they were so amazing and so kind and genuine,” Leo Benson said. “It was really humbling to see them. I don’t even know how I can express it into better words. I just love them so much.”

“This family is great,” Oksana Tymchenko told “GMA” of the Bensons. Oksana is staying with the family with her three daughters, but her husband had to stay and fight in Ukraine. She said her daughters miss their dad, but living with the Bensons has helped keep their spirits up.

“I’d never expected they’d receive us like that,” Tymchenko said. “Like their own children. We don’t even have a language barrier -- they understand us, we understand them.”

The Bensons said hosting refugees has shown how the war has impacted families like Oksana’s.

MORE: 11-year-old boy escapes Ukraine by himself, safely reunites with siblings in Slovakia

“We had boys that would be here like in the backyard playing and they would see a plane fly over and react in very scary ways screaming,” OT Benson said. “The other kids would say, ‘Rocket, rocket’ -- it looks like something they saw a few weeks ago.”

While the Bensons and the families who stay with them are still learning to adapt, the Bensons said they are also learning from their own kids, who they said are also changing from the experience too.

“I would say certainly when living in the U.S., you feel disconnected with this kind of thing. Think they come quickly to the realization that this is a different place, a different time, and it makes you grow up a lot faster,” OT Benson said. “Which for me as a dad I’m glad that they can do that, that they can see that and I want them to understand what it means to serve others and help others.