One mother and son duo is getting into the Halloween spirit in a viral way.

Like most mothers to young kids, Nidra Cummings was excited to start thinking about her son’s Halloween costume this year. And she knew that whatever it was, it had to be epic.

“I knew I wanted to do a really cool costume and something that was mommy and me,” she told “Good Morning America.”

(MORE: Mom makes elaborate $5 <a href="https://abcnews.go.com/alerts/halloween" id="_ap_link_Halloween_Halloween_" target="_blank">Halloween</a> costumes out of cardboard boxes. Get her step-by-step guide for a must-try costume)

Cummings, who is a traveling nurse based in Las Vegas and mother to Nathan Houston Burch, a rambunctious 2-year-old, wanted to make sure that the costume she chose would reflect his big personality.

Eats snacks faster than a speeding bullet! Tantrums more powerful than a locomotive! Able to leap all on my nerves in a single bound! Or whatever Superman said 🙄🙄🙄😩😩🤦🏾‍♀️🤦🏾‍♀️😒😒 . . . . . . . . . #halloween #halloweensnacks #halloweencostume #superman #trunkortreat #vegas #lasvegas

“The whole joke is that he always has a snack and he is a very good eater,” she said. “We’ve never had an issue with him eating anything.”

With thoughts about her son’s playful personality and his love for food, she came up with the idea to transform her son into the Popeyes Chicken Sandwich for Halloween -- a costume (and sandwich) as one-of-a-kind as him.

“I just went with it,” she said about the outfit, inspired by the famed chicken sandwich which sold out just two weeks after its debut. 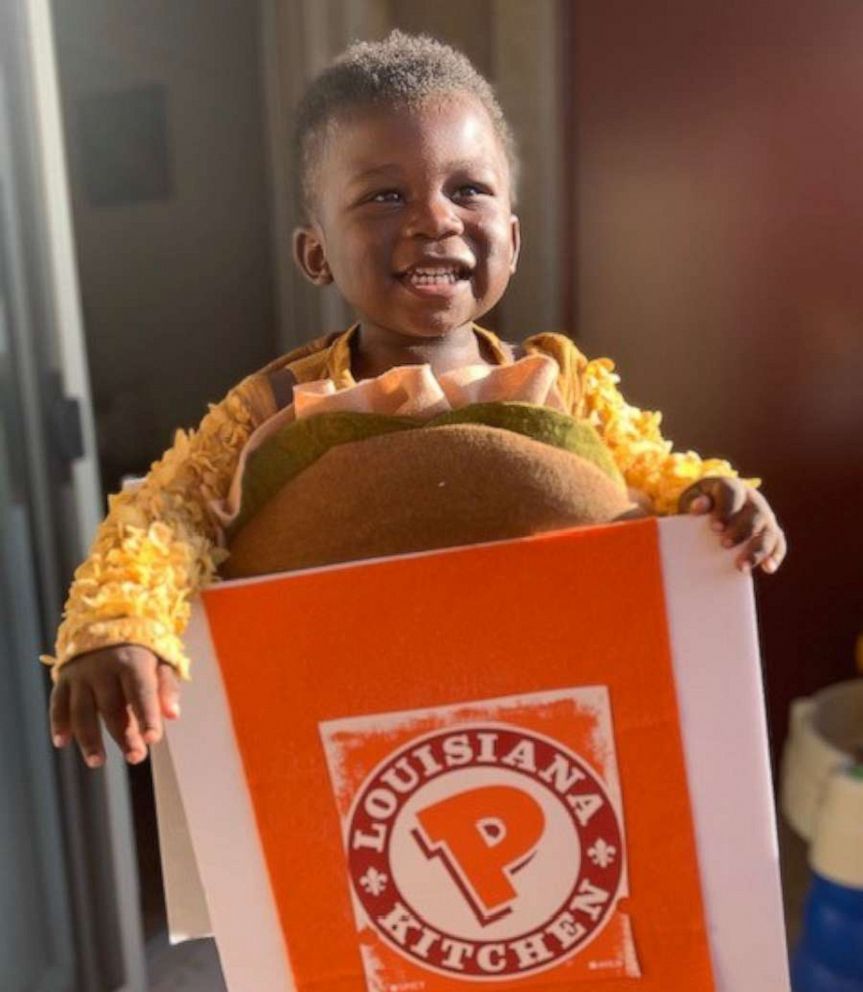 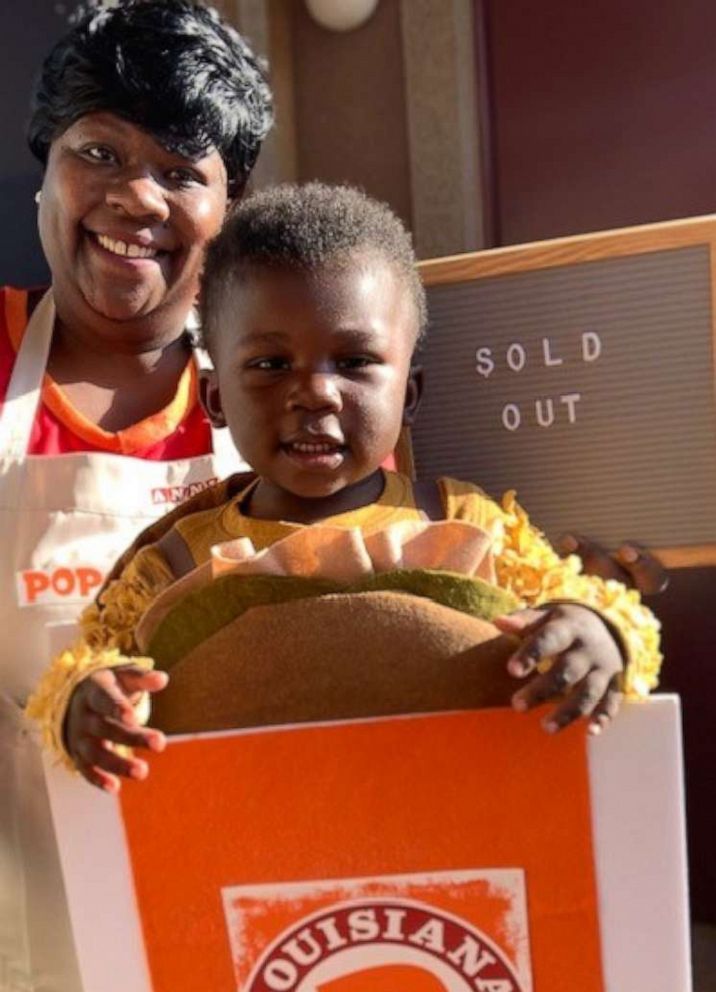 Courtesy Nidra Cummings
Nidra Cummings and her son Nathan, 2, pose for a photo in their Popeyes-inspired inspired Halloween costumes.

Cummings got to work on her son’s costume around the time of his birthday and it took her about a month to create the costume out of two actual Popeyes boxes, with felt fabric from the local craft store for the sandwich elements.

But her secret ingredient to achieve that fried chicken look? Corn flakes, which she glued on the sleeves of a shirt from Target to give it that fried texture. 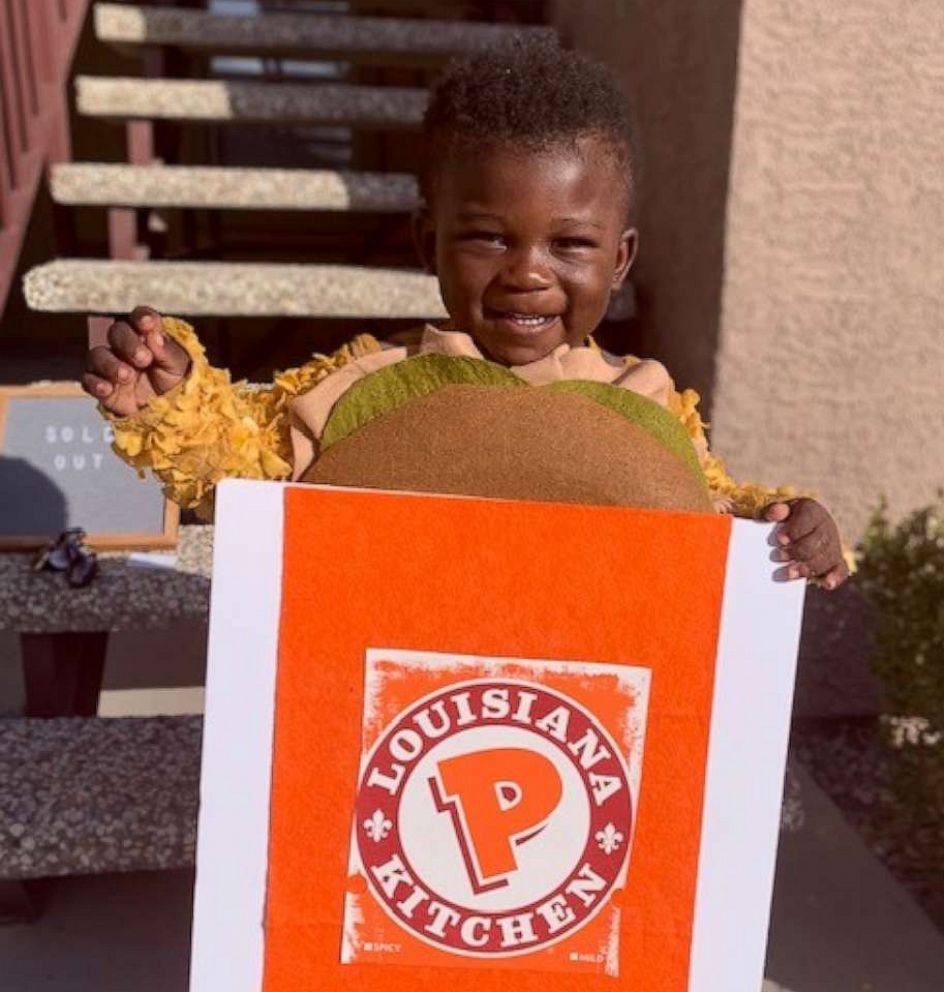 “It was very simple to make but I knew it was going to have a big impact,” she said.

For her costume, Cummings transformed into Popeye’s famous spokeswoman, Annie, and made her outfit by simply taking an apron and pasting the Popeyes logo across the front.

Cummings knew she wanted to share photos of her and her son in the costumes the week of Halloween, but it was fate when Popeyes announced Monday in an epic post that they would be bringing back the chicken sandwich.

So she posted the photos the following day and tagged Popeyes.

Since sharing on social media, her posts have been shared more than 200 times and have received hundreds of likes.

Editor's Note: This story was originally published on October 29, 2019.