All it took for one boy in the hospital to make some new friends was a pack of Post-it notes.

Meyer Mixdorf, 5, from Arkansas, was at Children's Mercy Kansas City hospital for brain cancer-related treatment when his mother decided he needed some cheering up. Confined to his room for a few days after a stem cell transplant in May, Meyer's mother, Liz Mixdorf, decided to entertain him by making Post-it art of a smiley face on the window.

"We were simply trying to entertain Meyer and keep his spirits up," Liz Mixdorf told "Good Morning America."

The next morning, they found that a building across the street had responded with a smiley face of their own. 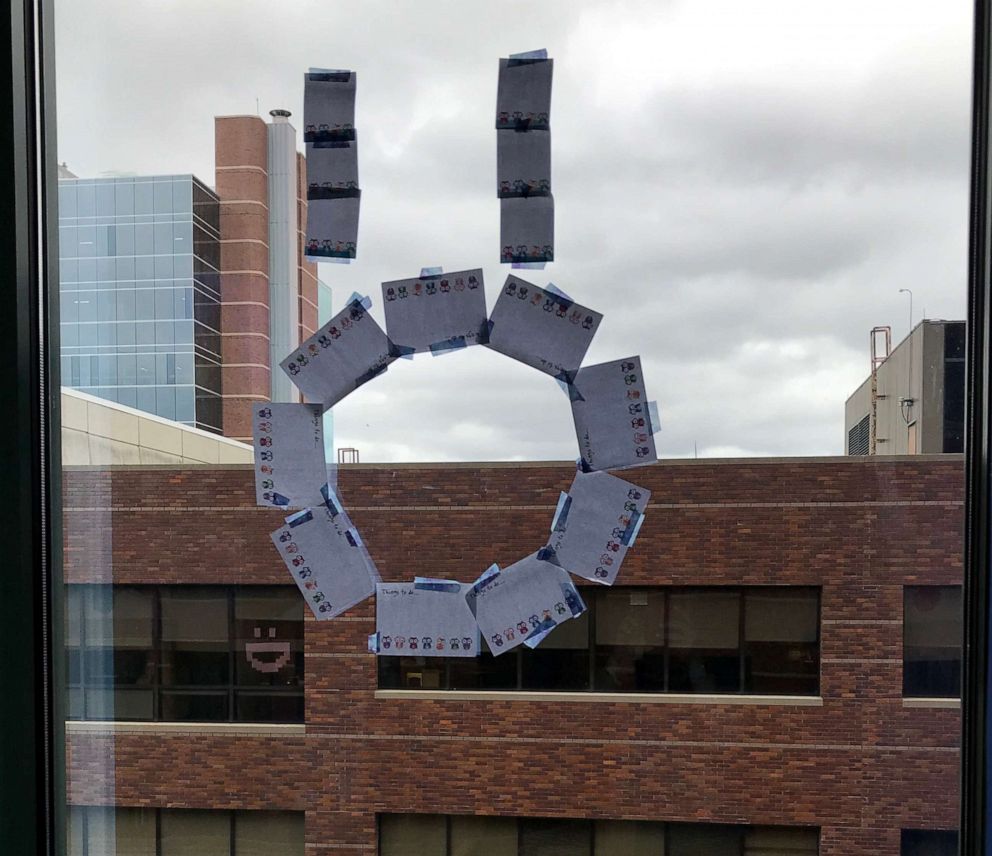 Liz Mixdorf
Meyer Mixdorf's Post-it Note art of a smiley face on the window of his hospital room at Children's Mercy Kansas City.

"We called them our mystery friends," Liz Mixdorf said. "It was so fun."

Although the Mixdorfs didn't know it, across from them was Truman Medical Centers/University Health.

"I was just kind of looking out the window and there was a little Post-it note smiley face up there," Johnna Schindlbeck, a Truman Medical Centers employee, told "GMA." "I thought it was cute and grabbed some notes and put up a little winky face."

The back and forth communication through Post-its continued and evolved into more elaborate designs, including Mario characters, Angry Birds, Ninja Turtles and Minions.

"I thought, 'Oh wow, this escalated fast,'" Schindlbeck laughed, and added that other hospital staff joined in to help create the art. 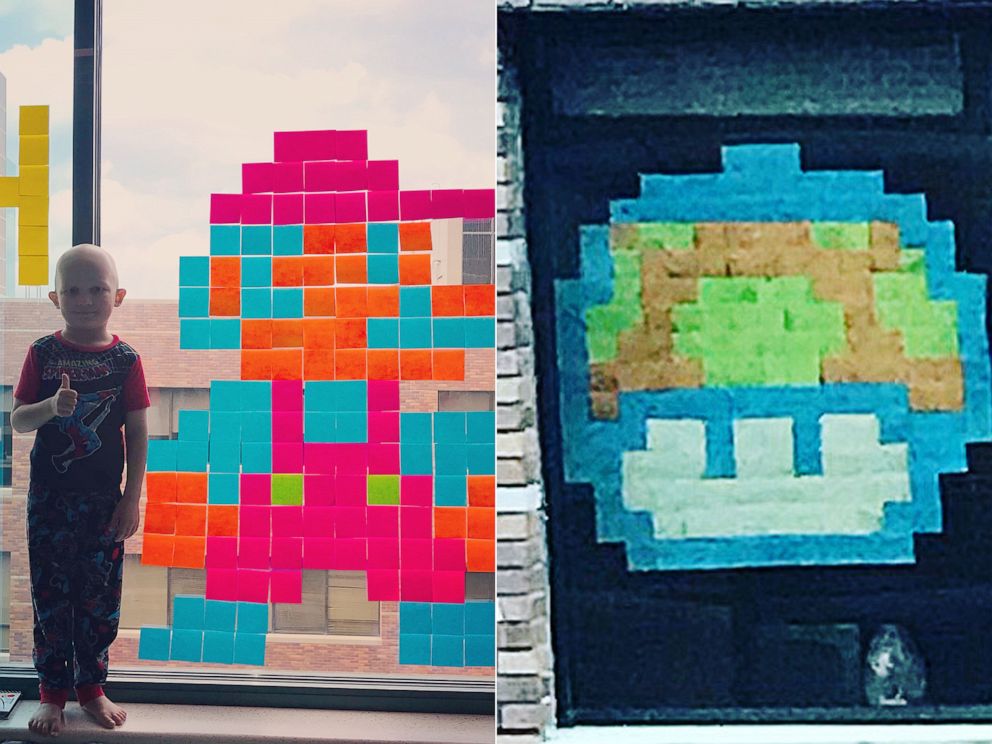 Initially, neither side knew who was on the other end until Mixdorf decided to put up a note that read, "Thank you <3 mom."

The note made Schindlbeck realize that her partner-in-art was in a patient room. Having lost two brothers to cancer herself, she said it reminded her of all the times no one was able to be with her brothers while they were at the hospital for their treatments.

"If this little art makes him happy, gives him something to look forward to, and it makes his mother and his family know that other people care ... it was so rewarding for me to see," she said. "I was just at the right place at the right time to be part of something that was so simply beautiful." 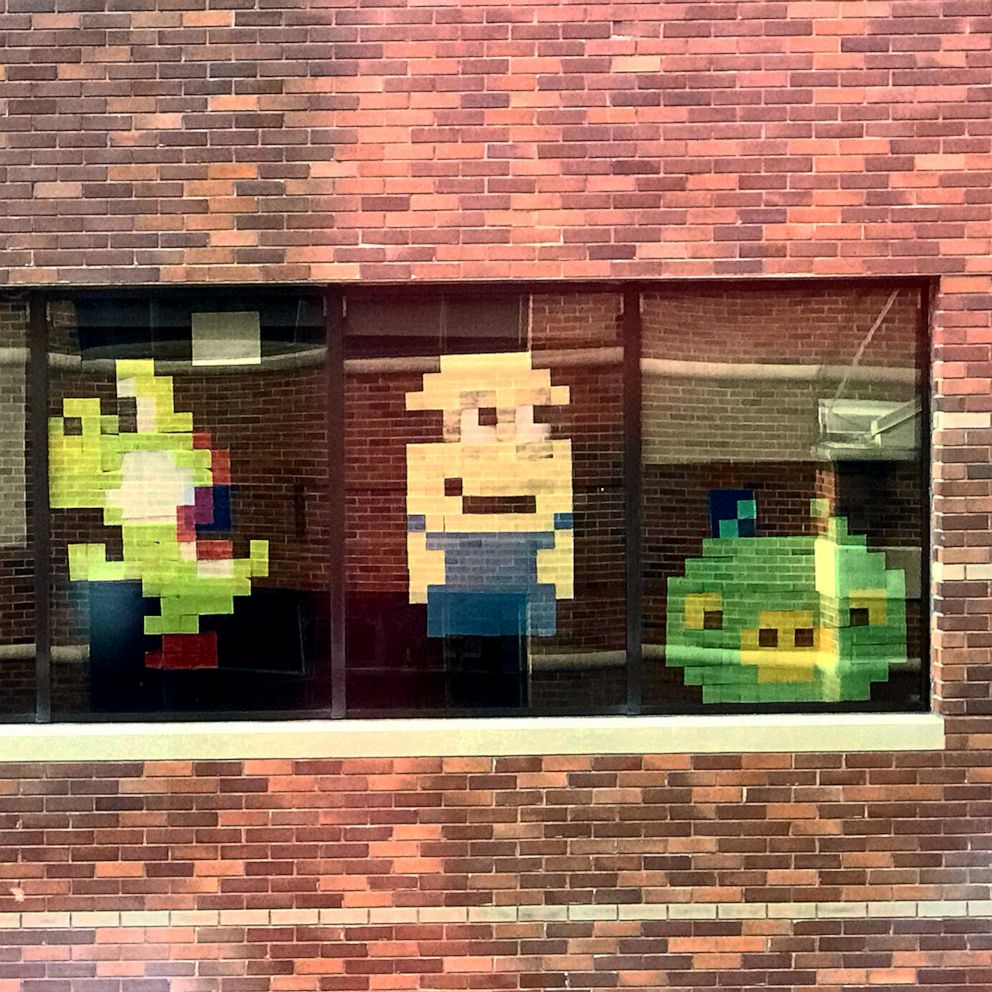 Near Meyer's canvas was a couch that the hospital had set up for parents to sleep on. But instead Meyer moved in to keep an eye on his friends across the street. Each side was eventually able to catch distant glimpses of the other.

"He just lived on that couch," Mixdorf said. "Sometimes the really great days were when he saw them changing it and they'd get to wave at each other."

She added, "Sometimes he'd see them but they wouldn't see him so he'd knock on the window as if they could hear. He loved it."

Once Meyer's absolute neutrophil counts were high enough for him to safely go outside, they were determined to meet their mystery friends and went over to the TMC/UH building.

"I went to the security guard and she said, 'What are you here for?' and I said, 'I have a strange story,'" Liz Mixdorf recalled, adding that once she showed the guard pictures, she and Meyer were taken upstairs. 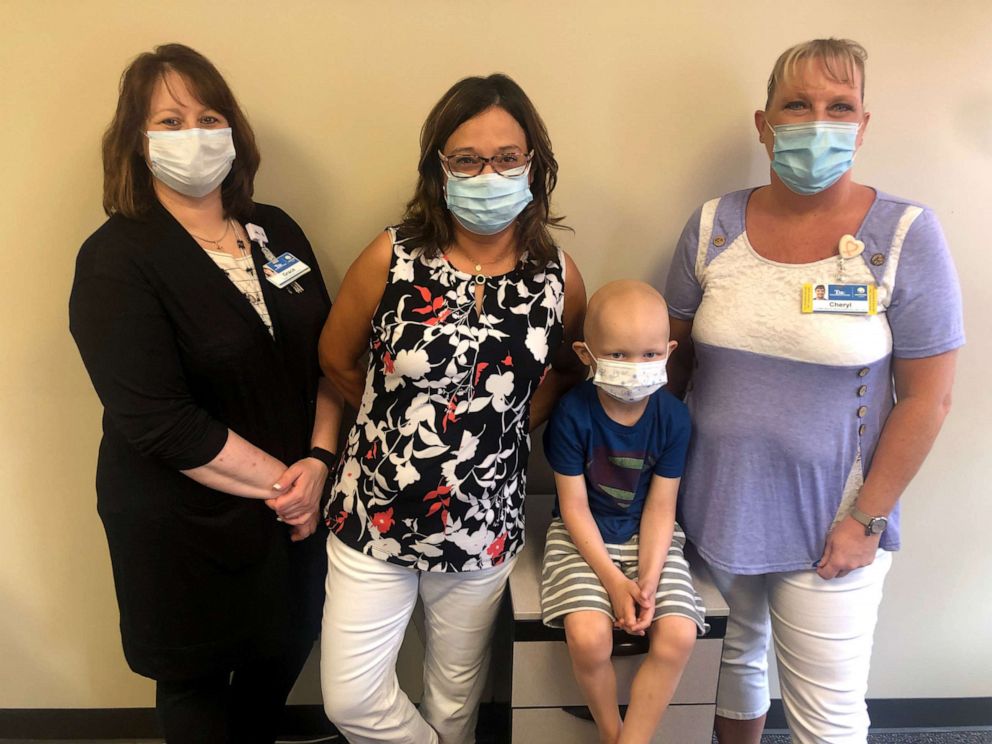 When they arrived on the correct floor, Mixdorf said "everybody started crying," because they saw Meyer and immediately knew who he was.

"It was really neat meeting him and to hug [Liz] and just know what it meant," Schindlbeck said. "It's something I'll never forget for sure."

With Meyer's latest MRI showing no sign of disease, according to Mixdorf, the family will soon be heading back home and taking Meyer to the zoo as a treat.