Teon Kennedy planned to propose to his then-girlfriend, Martine Drouillard, last spring at her baby shower to celebrate their first child.

That plan changed when Drouillard, a Brooklyn-based school teacher, was diagnosed with severe preeclampsia 25 weeks into her pregnancy.

Hoping to save both Drouillard's life and her baby's, doctors quickly hospitalized Drouillard and performed an emergency C-section.

The couple's daughter, Morgan, was born on April 12, 2020, and weighed just 1 pound, 2 ounces at birth, according to Kennedy and Drouillard.

"She was really, really small," Kennedy told "Good Morning America." "She was roughly the [size of the] palm of my hand."

Kennedy and Drouillard, both 31, have spent the past 10 months with Morgan in the neo-natal intensive care units (NICU) at three different NewYork-Presbyterian hospitals in the New York City area. 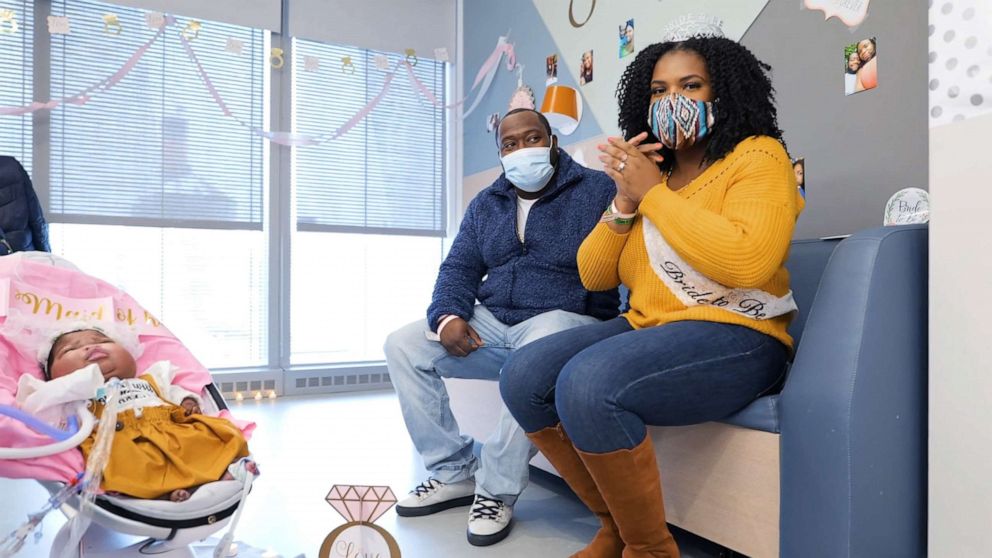 "Morgan’s case is very unique and very complex," said Drouillard, who noted that Morgan has undergone multiple surgeries and more than one dozen blood transfusions. "There are a lot of things that they have tried with other babies that are not successful with Morgan, but then there are things that aren’t traditional for NICU babies that have worked [with Morgan]."

MORE: Baby gets farewell graduation ceremony after 80 days in the NICU

Morgan has spent the past several months at the New York-Presbyterian Alexandra Cohen Hospital for Women and Newborns, where nurses and doctors have become like a second family to Drouillard and Kennedy. 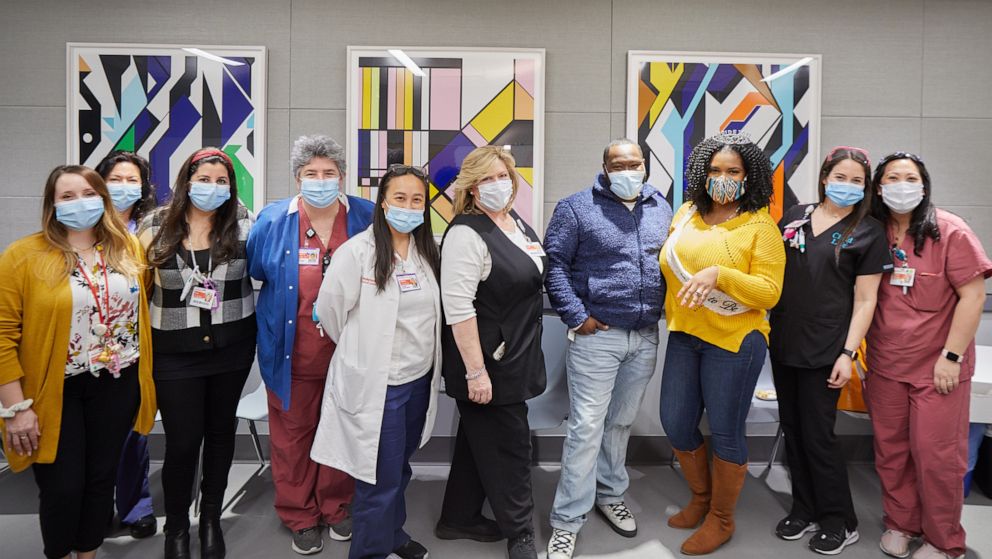 Because of COVID-19 restrictions, only one parent is typically allowed with Morgan in the NICU, except for special circumstances like when she undergoes a surgery. Since Drouillard is currently working from home as a teacher and able to isolate more -- while Kennedy works outside the home -- she is the primary visitor for Morgan.

Every weekday, Drouillard teaches until 3 p.m. and then makes the hour-long commute to the hospital. She typically returns home around 11 p.m., prepares her lesson plan for the next day and then does it all again the next day.

On Feb. 12, two days before Valentine's Day, Drouillard was at the hospital for her daily visit and had dressed up for the day because the hospital staff told her they would have a meeting about Morgan's case.

When Drouillard walked into the NICU, she saw the red carpet typically in place to celebrate babies being discharged from the unit had been rolled out for her instead.

Near the red carpet was Kennedy, who got down on one knee to ask Drouillard to marry him, and Morgan, who was dressed in a shirt that read, "Mommy, will you marry daddy?"

"When Teon said, ‘Morgan has something to ask you,’ she was asleep until he said that," recalled Drouillard. "And then she opened her eyes, like, ‘This is my moment.'" 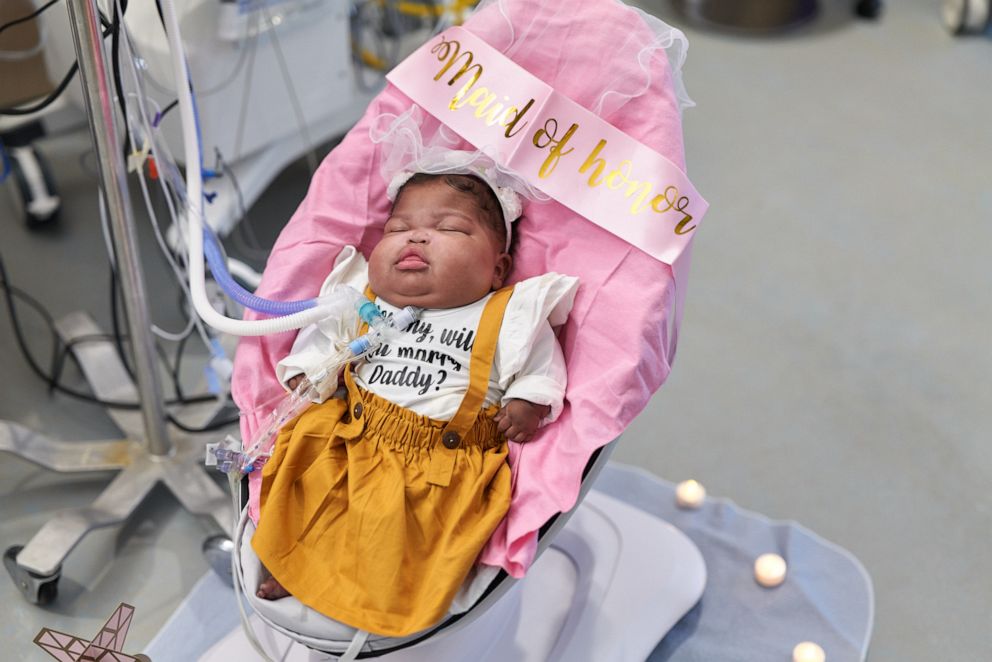 Kennedy said he finally decided to propose to Drouillard in the NICU for two reasons -- the staff had become like family and because Drouillard is always at the NICU.

"She’s been there every single day for the last 300-plus days," he said of his now-fiancée. "I tip my hat off to her every day."

NewYork-Presbyterian
Teon Kennedy proposed to Martine Drouillard in the NICU where their daughter, Morgan, has been treated for 10 months, Feb. 11, 2021, in New York.

Kennedy was assisted with his marriage proposal by the nurses and doctors in the NICU, whom Kennedy said took his idea and ran with it.

"I gave them a little bit of fuel and they took it to the next level," he said of the health care workers, who decorated the NICU, provided food, took photos and arranged the fake case meeting for the couple to attend. "It was actually one of the best places to do it."

Kennedy and Drouillard said they have not yet set a wedding date because they want to make sure that Morgan is out of the NICU and able to take part in the ceremony. So far doctors have not given them a NICU discharge date as they continue to work to strengthen Morgan's lungs before she can go home. 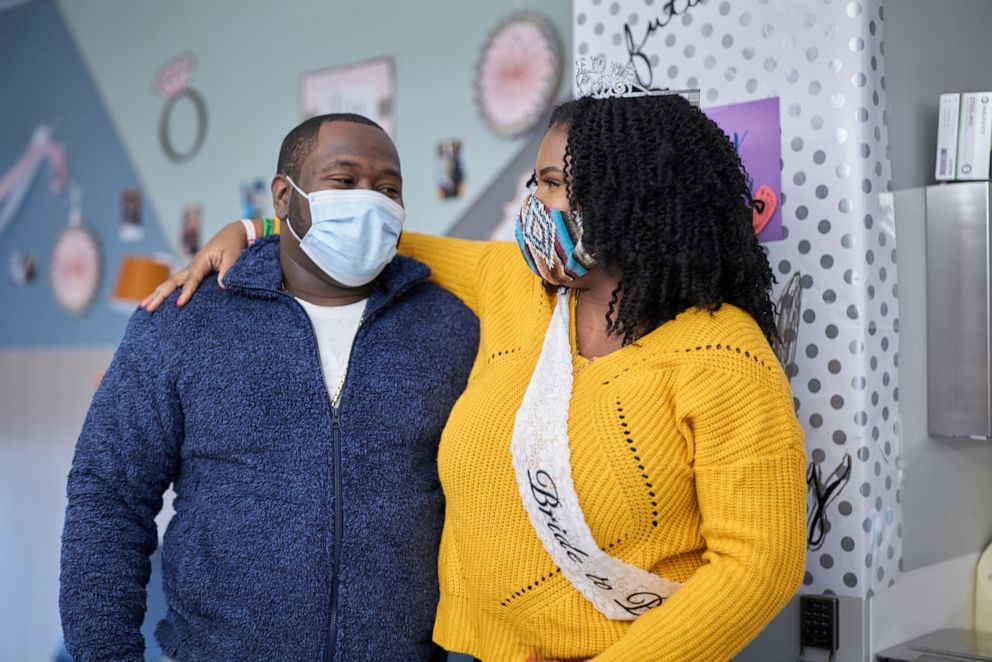 NewYork-Presbyterian
Teon Kennedy proposed to Martine Drouillard in the NICU where their daughter, Morgan, has been treated for 10 months, Feb. 11, 2021, in New York.

"Our main goal is for Morgan to come home because she has to be a part of the wedding," said Kennedy. "All we need is for her to come."

Until that day, the couple continues to spend all their time at the NICU, where Drouillard shows Morgan pictures of herself and Kennedy so she can see her parents without face masks on, and repeats a mantra to her every day.

"I just tell her, 'Remember who you are. You’re here for a reason. Mommy is proud of you. Daddy is proud of you. You’re my big girl. You’re my strong girl. It doesn’t matter how you start, it’s how you finish. You’re just having a rough start. You’re going to finish strong,” said Drouillard. “And I tell her that every single day.”