One love story had a berry-tale ending at a specialty grocery chain last weekend when the food-loving couple walked down the produce aisle, then said "I do" in the flower section. 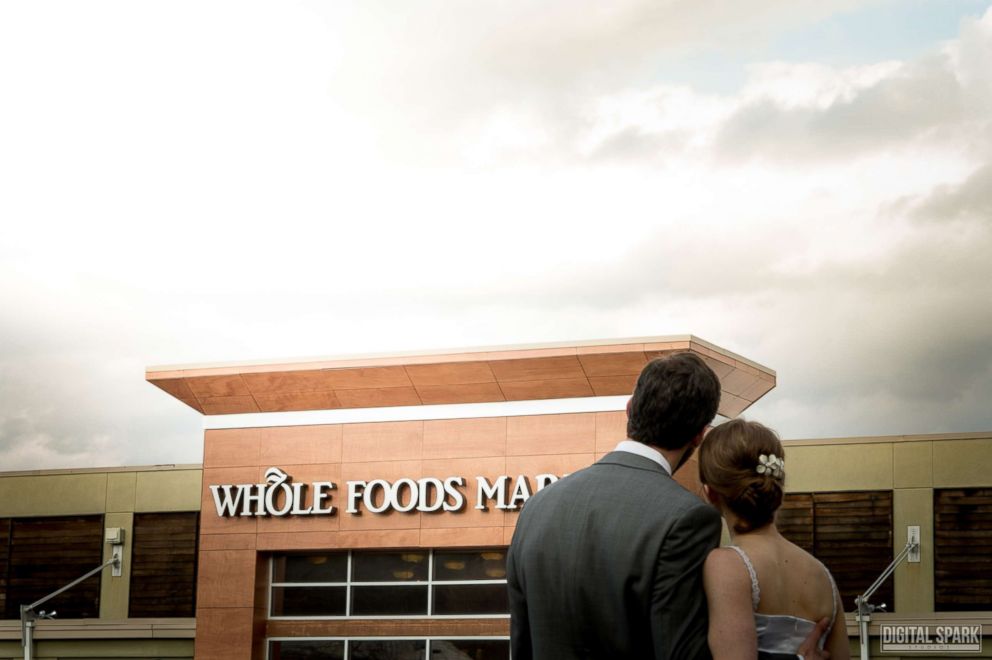 Ross Aronson arranged the engagement like a scavenger hunt around the store. There were a variety of catered food sample stations from pulled pork to cheesecake throughout the store with heart puzzle pieces waiting at each one and at the end of their supermarket stroll he popped the question in the flower section. 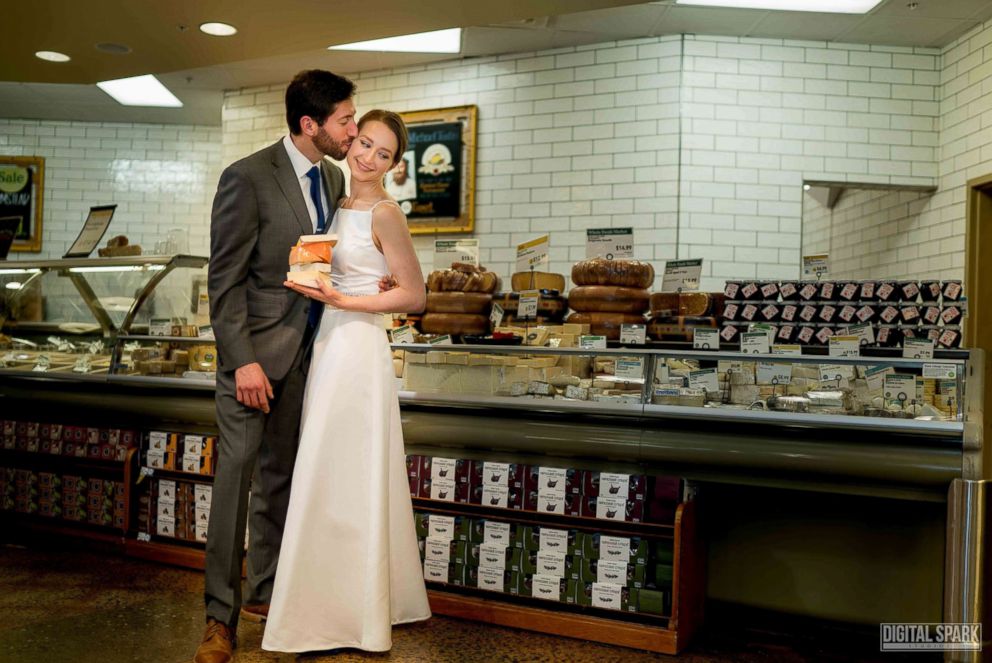 It was the perfect spot for the couple, who had moved from New York where they often meandered through the city's food shops.

"We moved to Chapel Hill from New York City and used to take huge sprawling walks around the city and we'd go into every food shop we saw and taste along the way," Jacqueline Aronson told ABC News.

After shopping around for various wedding venues, the couple decided that having the ceremony at Whole Foods would be the icing on the cake. 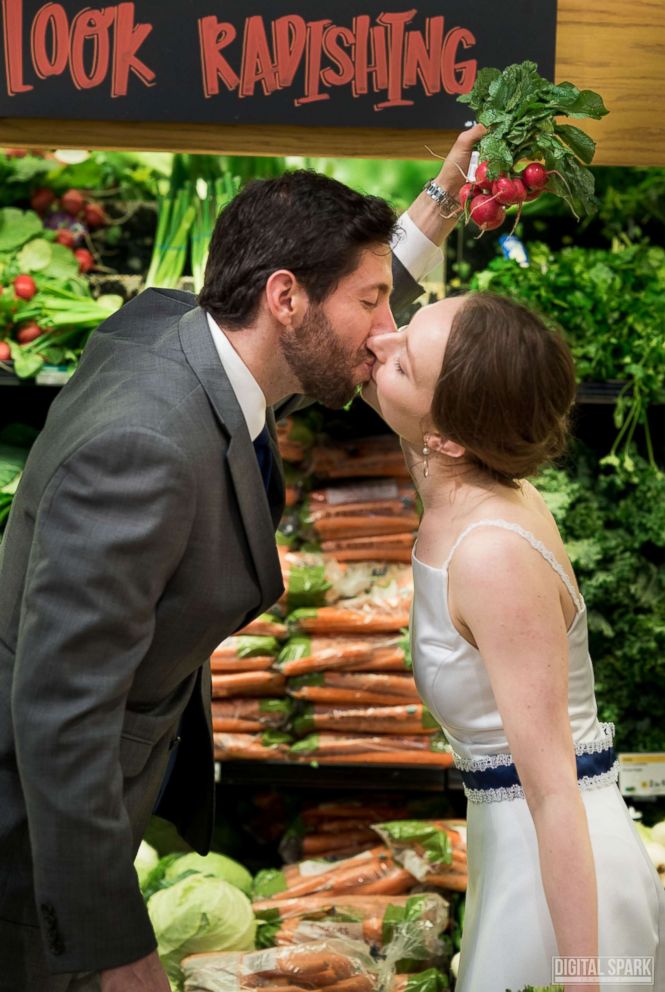 "In the days and weeks that followed, I replayed the engagement in my head and realized how special it was to have such a happy and important milestone happen in a place we constantly go," Ross Aronson said. "It was so perfect."

The store eagerly jumped at the opportunity to help plan their special day.

"There was almost no hesitation, they really shouldered so much responsibility to put together an amazing ceremony," he added. 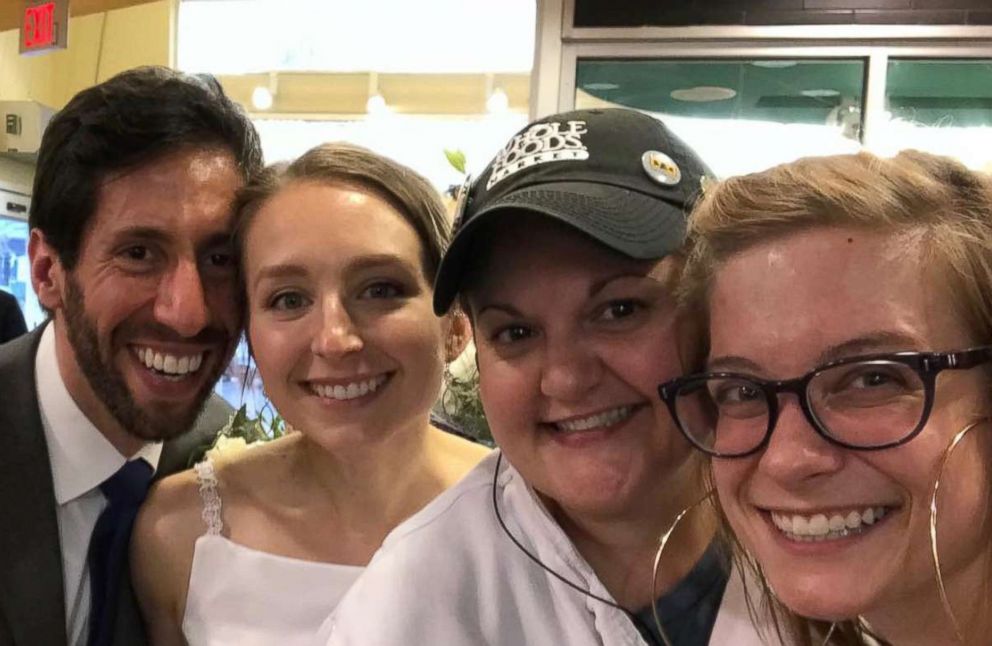 Krista Deitsch, an associate team leader, and Whitney Harlos, the store's graphic artist, planned everything with the couple. "Ross and Jacqueline are a great couple," Deitsch said. "They’re the kind of people you want to go out on a limb for and myself and Whitney shared in their excitement."

The bride said, "that was what was so cool about it."

"They have such demanding jobs and work long hours as is, but they were super on-board and so calm the entire time. They took on wedding planning and they were a dream team," she added.

Harlos even incorporated various signs throughout the store featuring food puns that the couple created just for the wedding, along with their hashtag #MakesMeWhole.

Some of their favorites included, "Joined in holy mackerel-mony, Cannoli be you, Cantaloupe anymore, the total snackage, Pho ever, Rib-eye do." 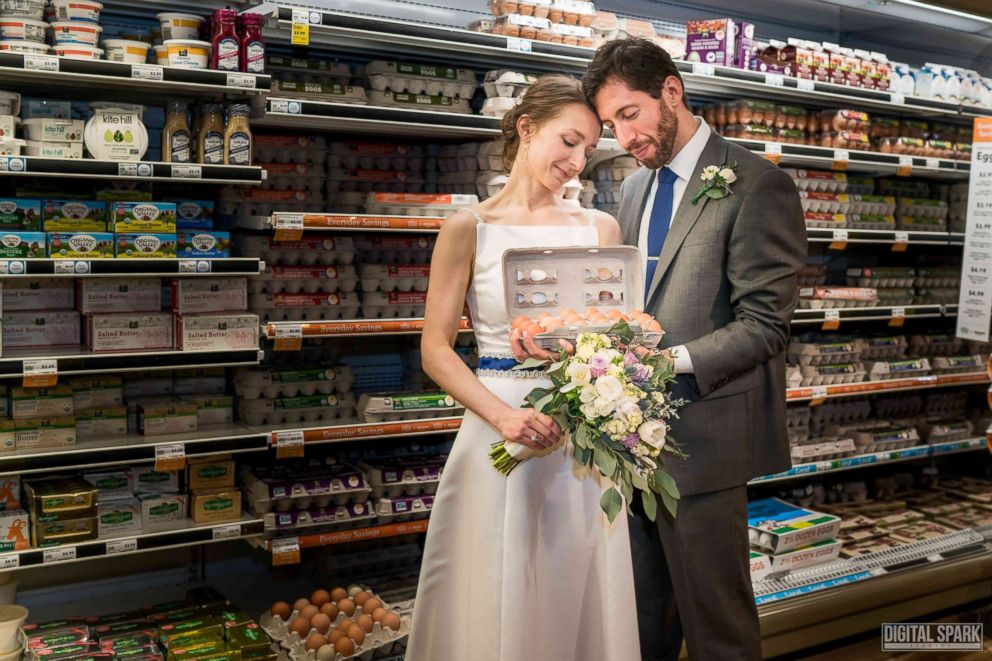 The pair didn't think their families would eat up the idea for the unique venue, so they invited them to come down for a meet the parents weekend instead and surprised them upon arrival.

"I think both sides of the family kind of thought that a wedding could be happening," Jacqueline Aronson said, "but nobody knew where it was going to happen." 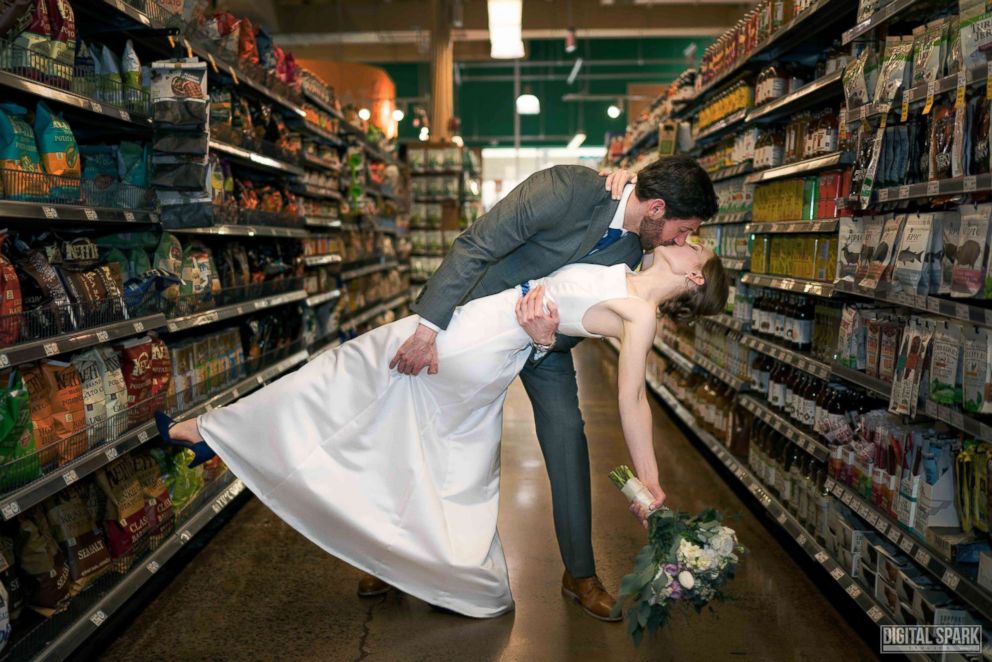 "The whole fun, no pun intended," the groom said laughing, "was surprising our parents with the ceremony because we wanted it to be fun for them too."

The florist even made boutonnieres for their parents who walked down the aisle to keep things somewhat traditional.

"It was its own little venue with floor positions and everything so it was a proper serious ceremony, just in a totally fun location," he added. 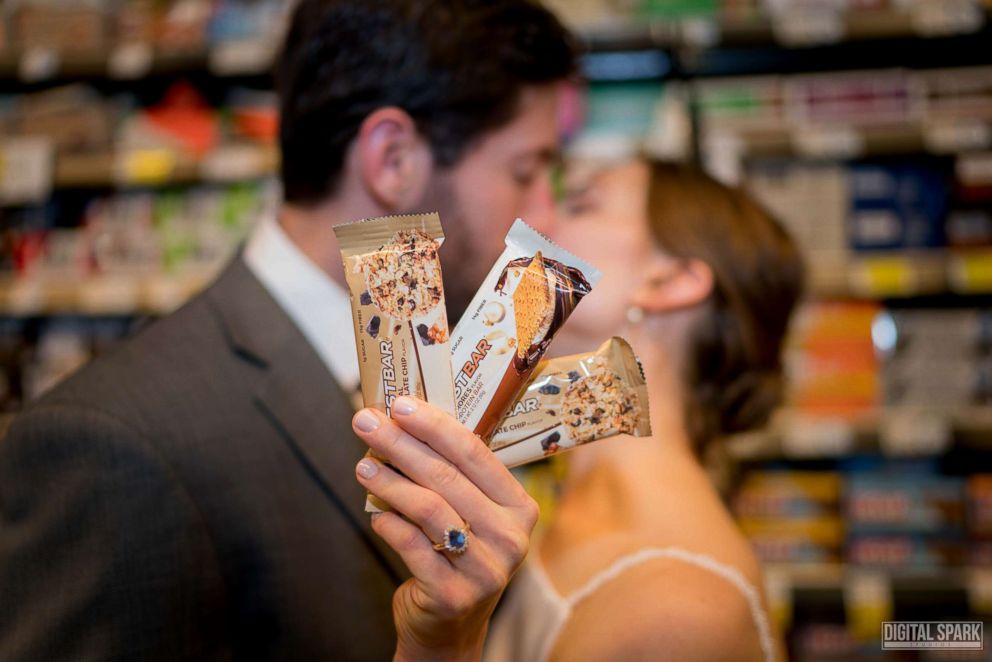 Other than his friend Laura Jacox, who was the violinist for the ceremony, the couple kept the aisles clear for the intimate family-only celebration.

Jacqueline walked down the produce aisle and said "I do" in the flower section, the same spot as the proposal, under a garland of greenery.

The "just-rose-married" couple said their families were "thrilled" and "they thought it was so creative, but still an authentic wedding." 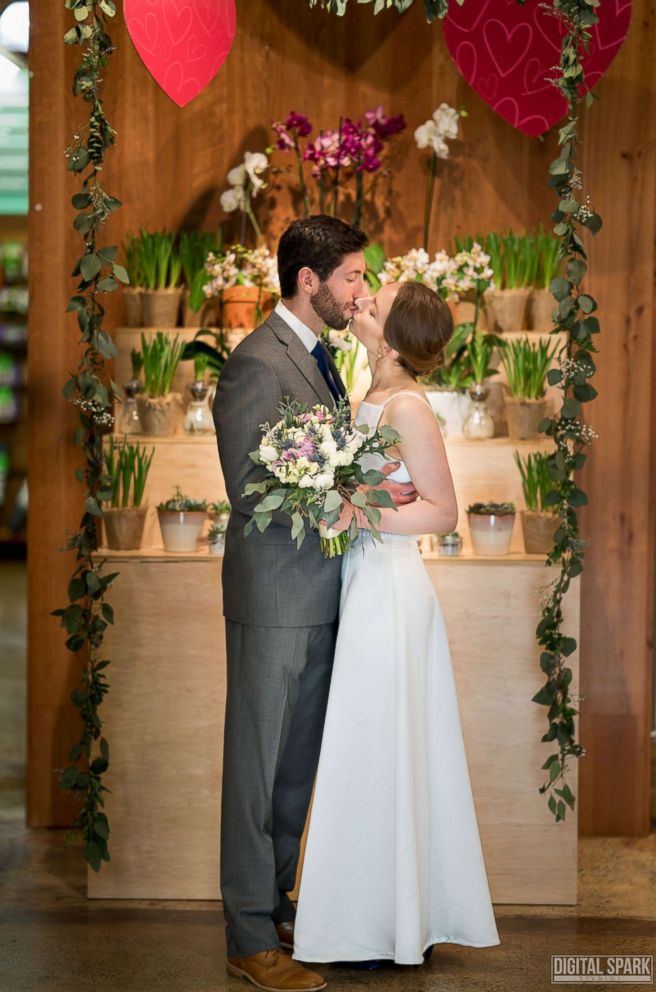 "It was during store hours and we got really kind words from shoppers walking around," Jacqueline said. "I kind of forgot I was in a wedding dress and someone said they hope our refrigerator is always full, that was my favorite."

I had the pleasure of creating the cake for the now famous (in my world at least) Whole Foods Market wedding! Congrats to the happy couple! #justrosemarried #wholefoodsmarket #chapelhill #wfmchapelhill

"We thought about a million ways to do our wedding and nothing else gassed us up as much as this," Ross Aronson said. "So that was it."

Following the something blue-light special day, the families went back to the newlywed's house where friends helped serve up a meal the groom had planned and prepared for a private dinner. 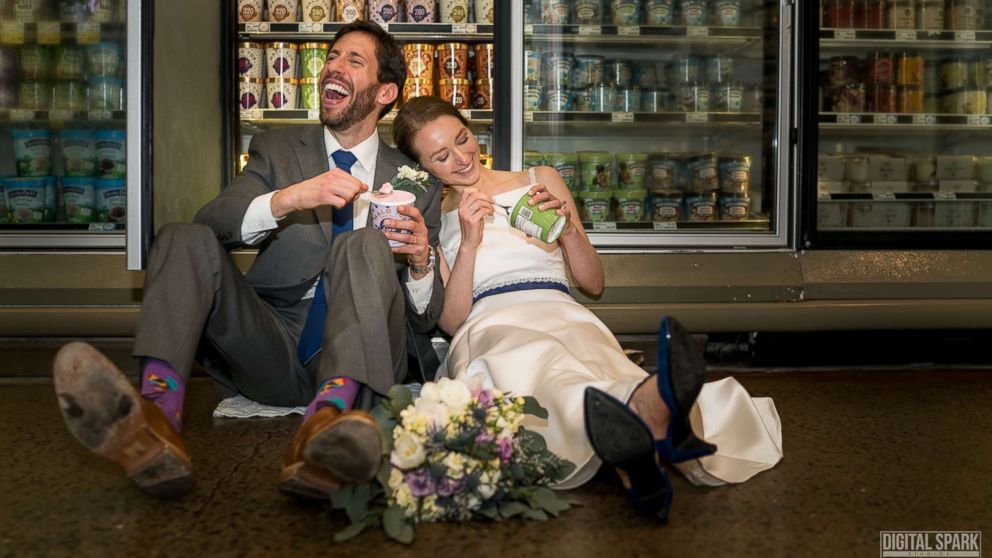 "It was cool to have so many people in your corner and the final execution was spot on and Krista and Whitney made it so effortless. Nothing was stressful about the wedding," the new bride said.

Mr. and Mrs. Aronson registered on Amazon for "lots of kitchen stuff" and they are juiced for their future as husband and wife.