Best friends Hillary Weidner and Amanda Zerbe each have three children who are the same age. Weidner has three girls: Beatrice, Poppy and Louise. Zerbe has three boys: Jack, Briggs and Charlie. 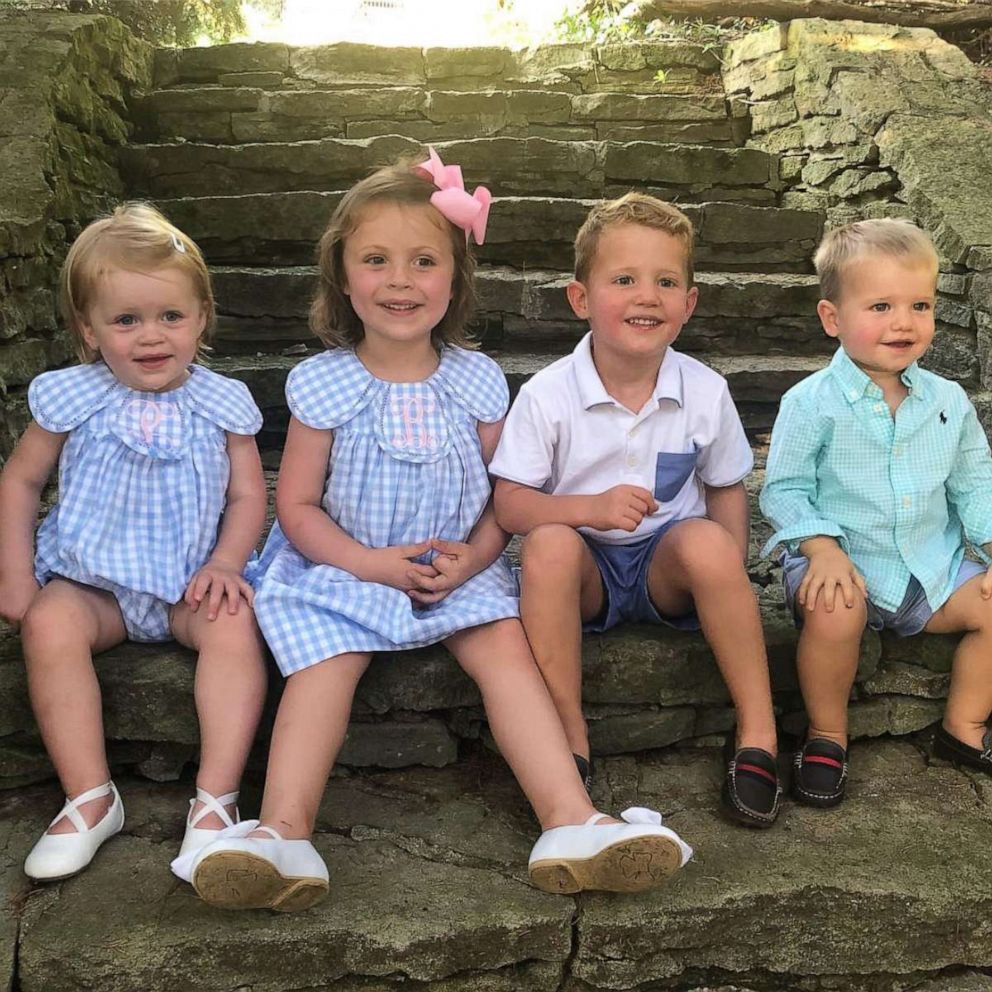 Courtesy Hillary Weidner
The Weidner family has three girls and the Zerbe family has three boys that are the same age.
(MORE: Boy sets up lemonade stand to raise money for a date with mom after dad dies of colon cancer)

Over Labor Day weekend, 5-year-old Jack told his mom he wanted to have a lemonade stand. The Zerbes set up the lemonade and the Weidner girls came to help their friends sell some cups.

Weidner says the lemonade stand was set up for around 45 minutes and raked in $148 thanks to the help of their generous neighbors. The families decided they would give the money to the Cincinnati Children’s Hospital to not only teach their kids the importance of giving back, but also for a stronger personal connection.

Weidner told "Good Morning America" that her oldest, Beatrice, was born with a rare liver disease and was placed on a list to receive a liver transplant. Thankfully, after several tests, the Weidners found out that Hillary was a perfect match. Hillary and Beatrice underwent a 12-hour side-by-side surgery at Cincinnati Children’s Hospital, where they were able to successfully remove a piece of Hillary’s liver and place it inside her daughter Beatrice.

"It was a crazy, traumatic, amazing experience," Weidner said. "We owe so much to the hospital." 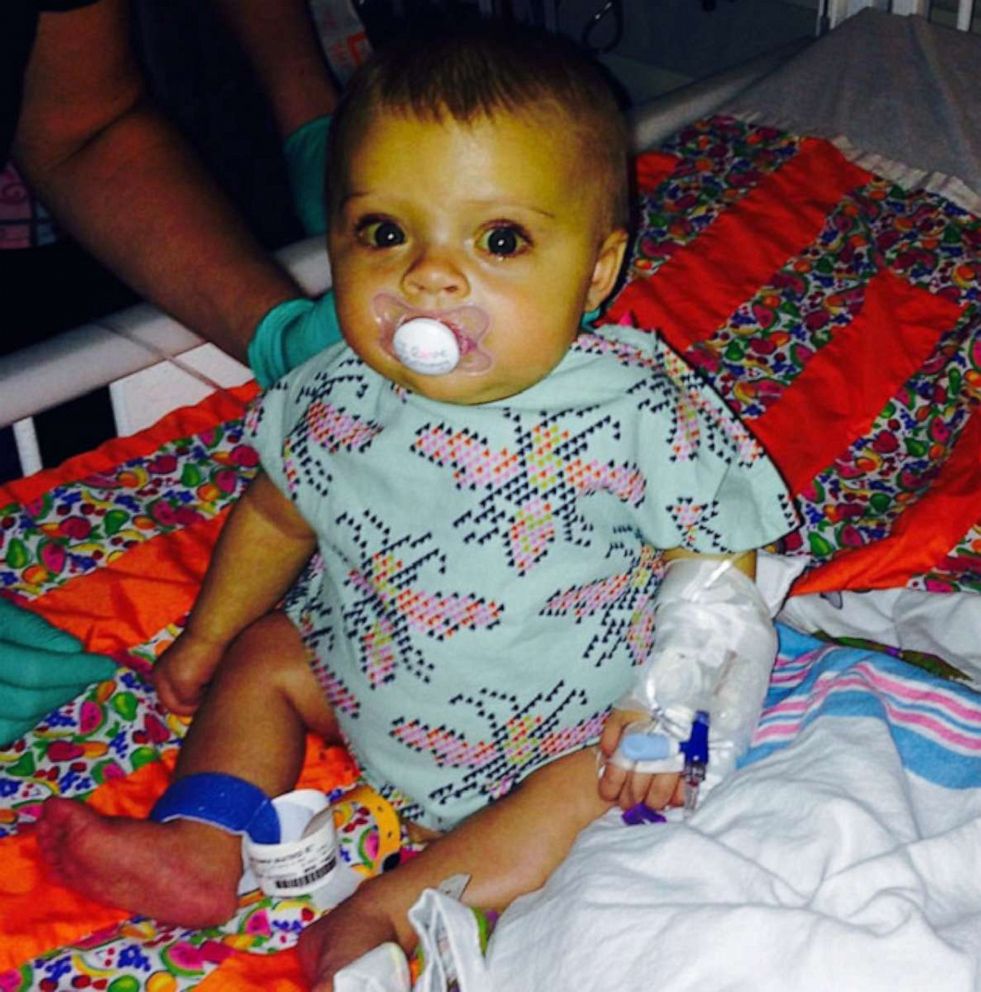 Courtesy Hillary Weidner
Beatrice Weidner was born with a rare liver disease and was given a liver transplant at 6 months old at the Cincinnati children's hospital.

Weidner says Cincinnati Children’s Hospital has a research center where they are working to grow organs in their labs in hopes of being able to help the nearly 100,000 people who are on the organ donor waitlist. The families wanted to give the money toward advancements in science to help people waiting for organs – like Beatrice once was.

"People with Bea’s condition die waiting for organs," Weidner said. "We are so fortunate that we had a match and could do that, but that’s not the case with every family."

Weidner and Zerbe wanted to teach a lesson in giving to their kids, so they made a giant check and brought it with them to give to the hospital. Weidner snapped a photo and posted it to her Instagram and flippantly asked anyone who wanted to match the children’s donation to send her a Venmo and she would make sure the money was donated. 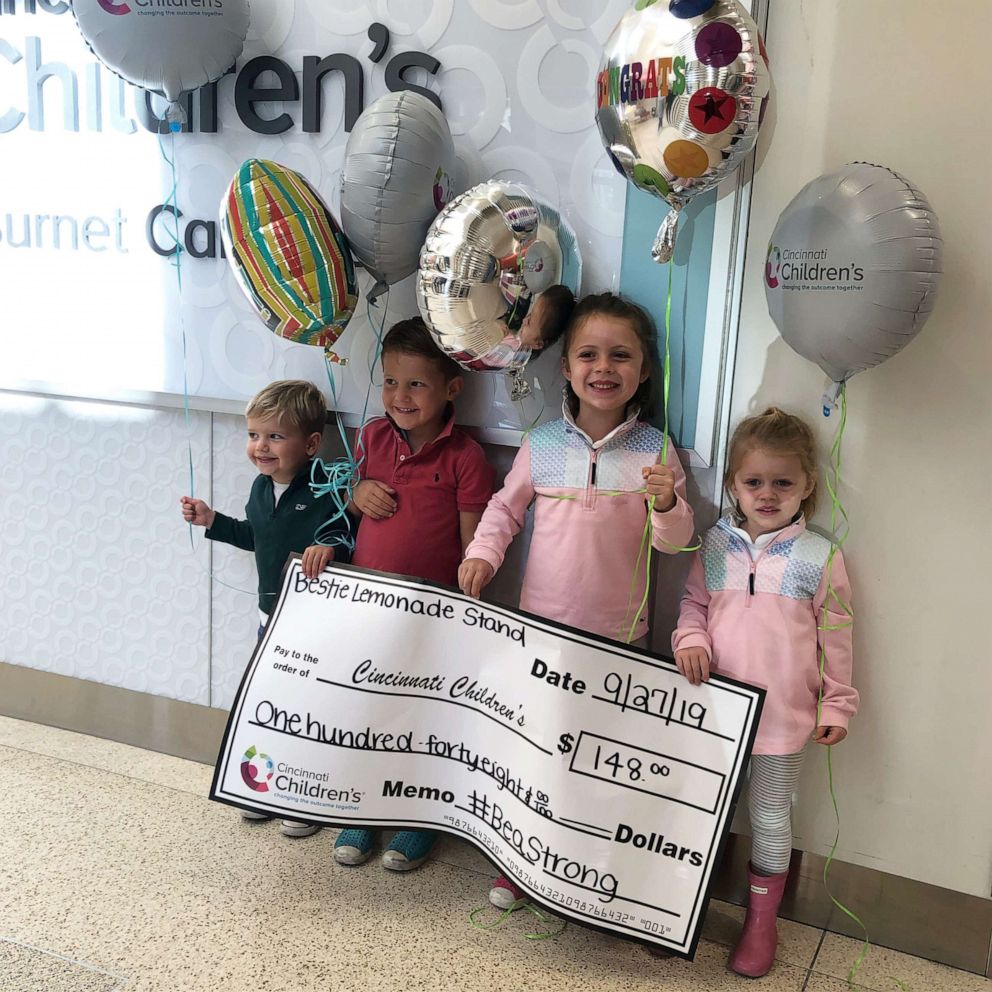 Courtesy Hillary Weidner
The kids delivered the money they raised for the Cincinnati children's hospital in the form of a big check.

She had no idea how many people would take her up on the request.

The picture of their children’s lemonade stand went viral and the donations began pouring in faster than lemonade was being poured into cups. Weidner quickly had hundreds then thousands in her Venmo account. Her post even caught the attention of some famous faces.

"Andy Cohen and Anderson Cooper are coming to Cincinnati and we have tickets, so I pinged them on my Instagram story asking if they wanted some lemonade," Weidner said. "Andy then mentioned it on his Sirius XM show and pledged $5,000 to our cause on behalf of him and Anderson."

(MORE: Bikers line up at girl's lemonade stand after mom helps save them during crash)

Weidner says she thinks the lemonade stand donations have taken off because people want to be a part of something good in the world. 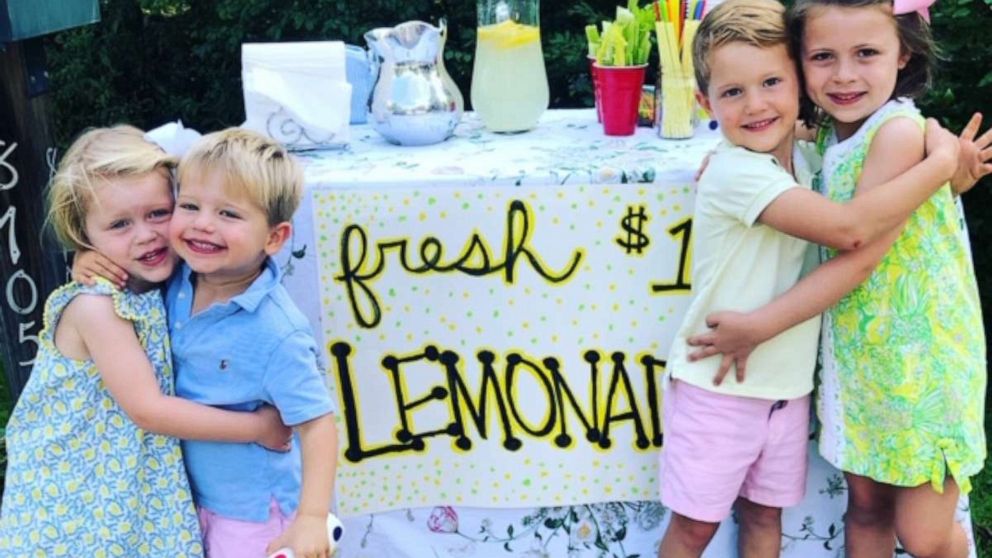 Courtesy Hillary Weidner
Beatrice and Poppy Weidner with their best friends Jack and Briggs Zerbe had a lemonade stand on their street to raise money for the Cincinnati children's hospital.

"The news can be so negative. There are shootings, deaths, car accidents. We wanted to show that there are good people out there," Weidner said.

Not only did Weidner and Zerbe want to highlight the good in the world, they also wanted to teach a valuable lesson to their children.

"Our job as parents of little kids is to raise a generation of givers," Weidner said. "This was our teeny way of showing them that they can raise money for people who need it more than they do. We hope that when they’re older they will look back on this and feel excited and empowered."

Weidner says the families will plan on having more lemonade stands in the future, even if they aren’t as lucrative.

"We would love to do an annual lemonade stand," Weidner said. "Even if it only raises $50 this will be something that we continue and we want it ingrained in them that giving back is good and they can do something powerful."

Weidner encourages people who would like to donate to Cincinnati Children's Hospital to send money through her Venmo account @hillary-weidner.