A military father who returned home after 10 months in Afghanistan surprised his 10-year-old daughter in the sweetest way.

Air Force Lieutenant Colonel Keith Cowell surprised his daughter Kindle Rose by showing up at lunch time at Legacy Elementary School in Louisiana dressed up as a bear, the school mascot. 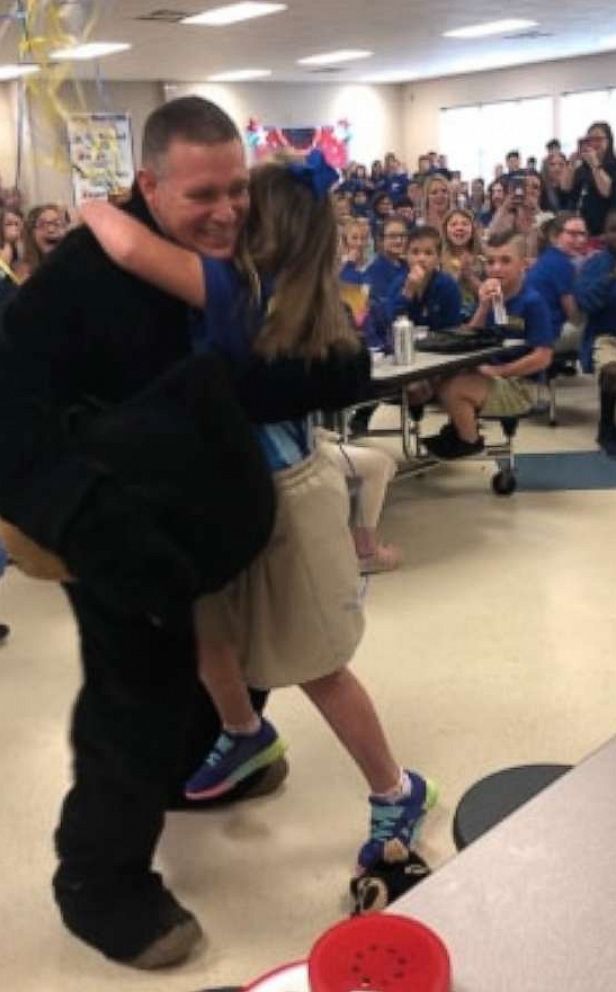 Cowell said the idea to surprise his daughter was his wife, Lisa's, and she started to hatch the plan with Lisa Smith, the school resource officer, and Kimmie Smith, the school's principal, a week before the event.

"The principal wanted the whole cafeteria to be involved," mom of three Lisa Cowell said. "Her school is so supportive."

Principal Smith kept everyone in the cafeteria longer than usual to make sure there was a crowd for the surprise, but didn't tell everyone what was going to happen. 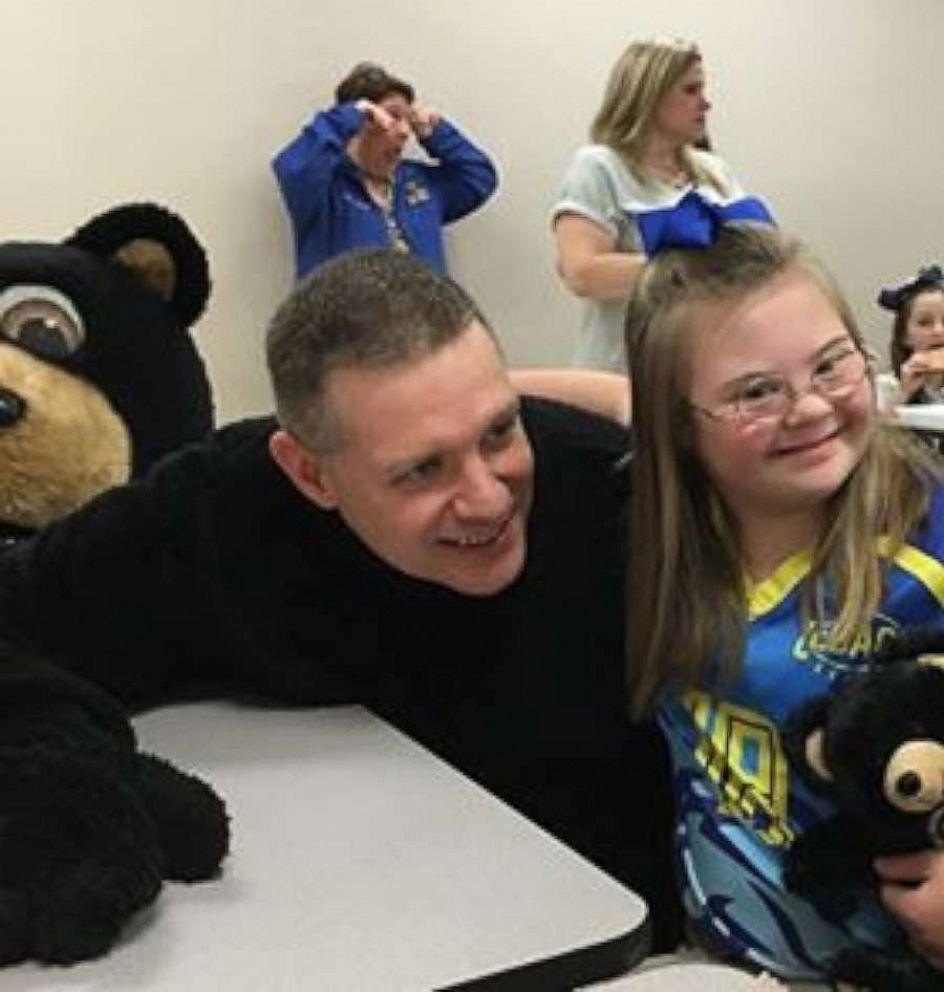 Keith Cowell walked through the cafeteria dressed as the mascot, shaking hands with and high-fiving kids along the way and carrying a bouquet of balloons and a teddy bear.

When he stopped in front of Kindle and presented her with the teddy bear and balloons and revealed who he was, the entire cafeteria started cheering and clapping. 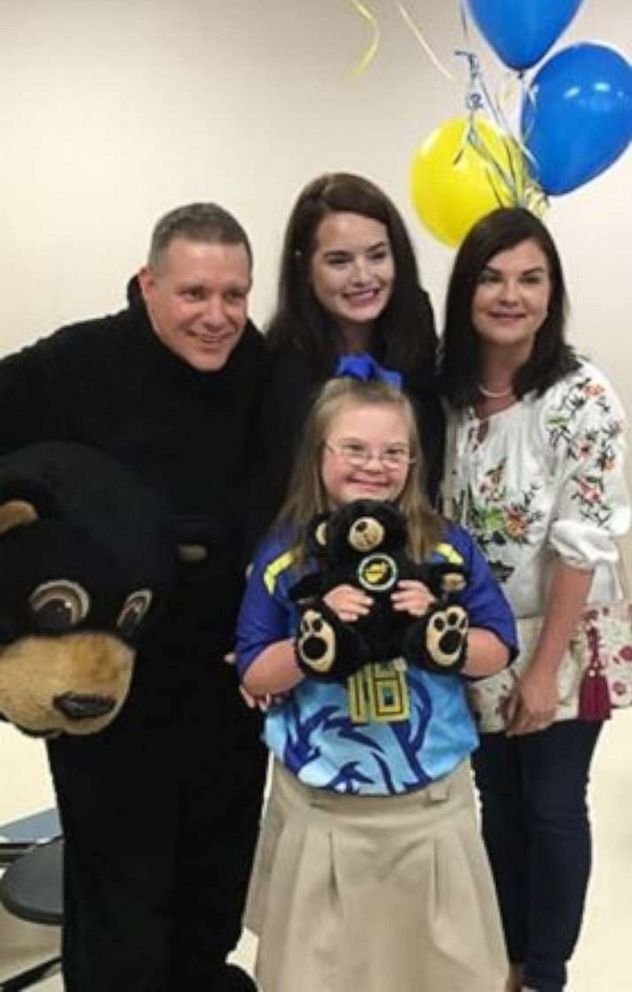 Lisa Cowell
The Cowell family poses together after sweet reunion.

"It was precious. It was a sweet. Everybody was crying," Principal Smith said. "It was a tender moment. I was glad that I got to be a part of it."

"I was excited to see her reaction," dad Keith Cowell said. "We just can't harp enough that the people were all excited and crying to see that Kindle was gonna get this happy moment and that was really cool to see."

(MORE: Military dad feels 'blessed' to be reunited with wife and son days before Christmas)

Devin Gouthiere, Kindle's 27-year-old sister, was also there to witness the heartwarming surprise.

"I honestly did not expect to get emotional," she said. "But when he took off the mask, I lost it. So did everyone else." 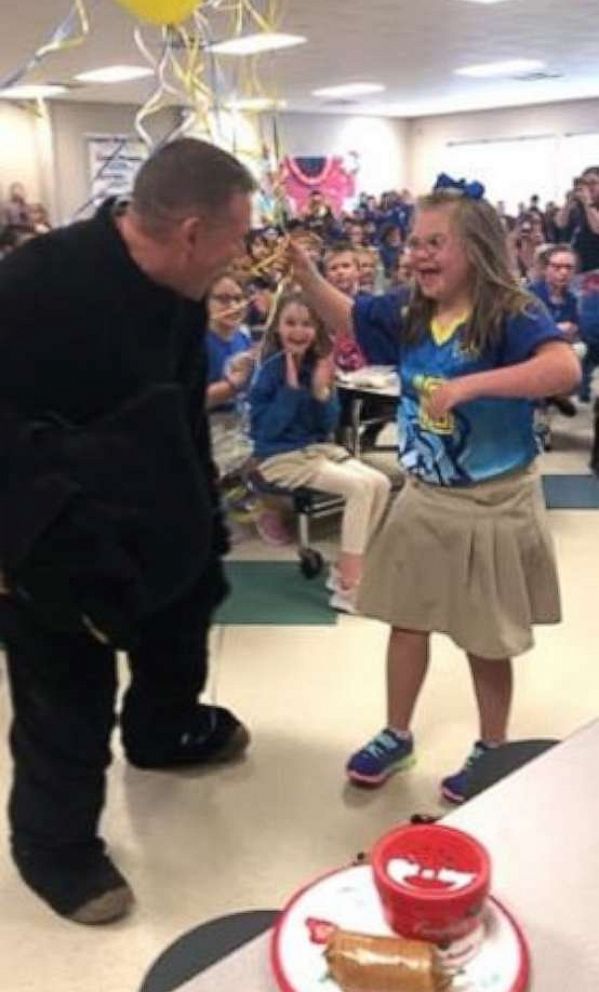 Principal Smith posted the special moment to Legacy Elementary School's Facebook page and it immediately took off, with 38,000 views so far.

Kindle's mom said the next day, when Kindle went back to school, all her classmates kept telling her, "You're a star!"

About 150 of the students that attend Legacy Elementary School are from military families, Principal Smith told "GMA."

"This was a neat way to honor them and thank their parents for their service," the principal said.

April also happens to be the Month of the Military Child.

Reflecting on this, Keith Cowell said the only downsides of the moment was that "there were other kids there with parents deployed as well in Afghanistan. But this is a nice way to remind everyone that we're still there."