An Alabama woman says her experience in the neonatal intensive care unit over 20 years ago inspired her own journey to become a NICU nurse and a nursing professor.

Now, one of her twin daughters, who was born prematurely, is following in her mother’s footsteps and pursuing her own career as a NICU nurse.

Tara Wood, 46, of Odenville, Alabama, told “Good Morning America” she never expected to end up in the NICU before her twin girls were born at 26 weeks. 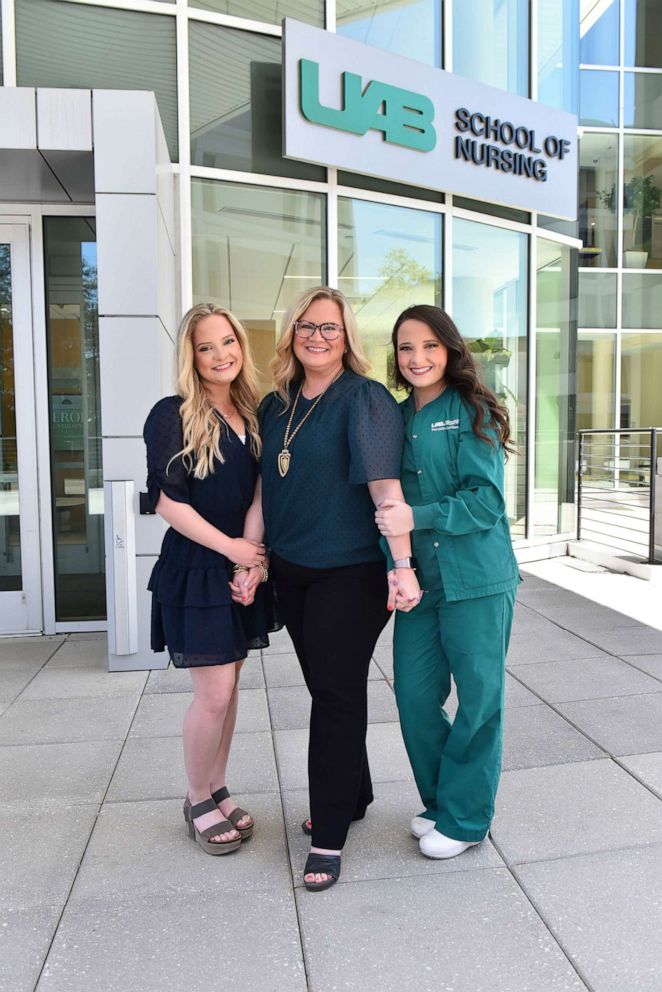 Frank Couch/UAB School of Nursing
Taylor England, Tara Wood, and Jade England have a close connection to the University of Alabama at Birmingham.

“I was 23 so I didn't have a lot of risk factors, other than the multiple gestation, as far as to be expecting a premature birth,” Wood recalled. “I went in and they told me that they were coming and they tried to put off the labor but my water broke.”

Taylor and Jade England were born within 24 hours after Wood arrived at the hospital, she said. They would then go on to spend 87 days in the NICU where Wood said things would change “minute by minute.”

“Every day I was there and visited and the nurses and the nurse practitioners were, I truly call them my lifeline to my babies,” Wood said. “Because they were really sick for a long time and I couldn't hold them. It was almost, I think six weeks, before I got to hold them, close to two months. And so during those visits, I sat in a rocking chair beside their beds and I spent hours getting to know the nurses personally.” 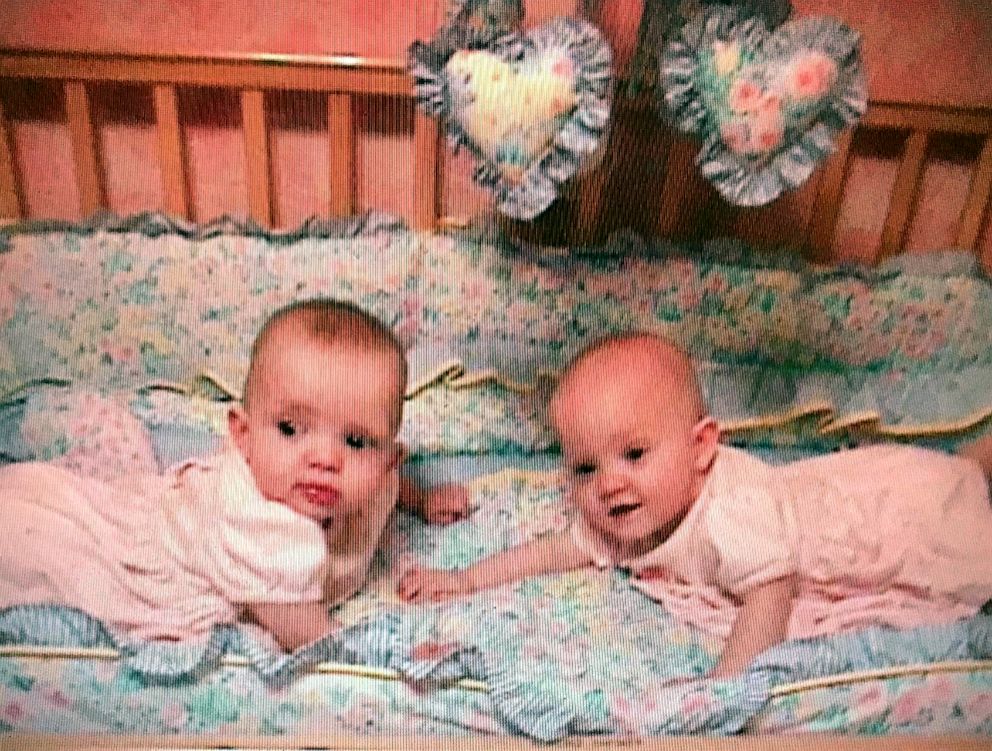 The 87 days in the NICU left a profound impression on Wood, who initially went back to school to pursue a teaching degree.

“I call it a calling. I can't explain it other than to say something didn't sit well with me or feel right to be pursuing that degree,” Wood told “GMA.” “I told my family, I was like, ‘I really feel like I need to be a nurse.’”

After Wood switched programs and got her nursing degree, she knew exactly where she wanted to be.

“As soon as I graduated, I went straight to the NICU,” she said. “And I immediately knew that that was where I belonged.”

Wood said being in the NICU was not just professionally fulfilling but also benefited her personally too.

“We didn't really talk a lot about the impact of having a premature baby or having post-traumatic stress from events that really occur in our life. And so I think that I found healing and processed all of that through helping others and sharing my story and explaining to mothers and fathers and families that were crying in all of the uncertainty, that I know how you feel,” she said.

Wood would go on to earn her master’s degree in neonatal nursing and her doctorate in nursing practice at The University of Alabama at Birmingham. She now teaches in addition to being a nurse as an assistant professor at UAB’s School of Nursing and serve as the coordinator for the school’s neonatal nurse practitioner specialty track.

It’s the same school her daughter Jade England, 22, just graduated from with her nursing degree. She said she and her twin sister, Taylor England, grew up following their mom to the NICU and loved to learn all about their mother’s line of work. 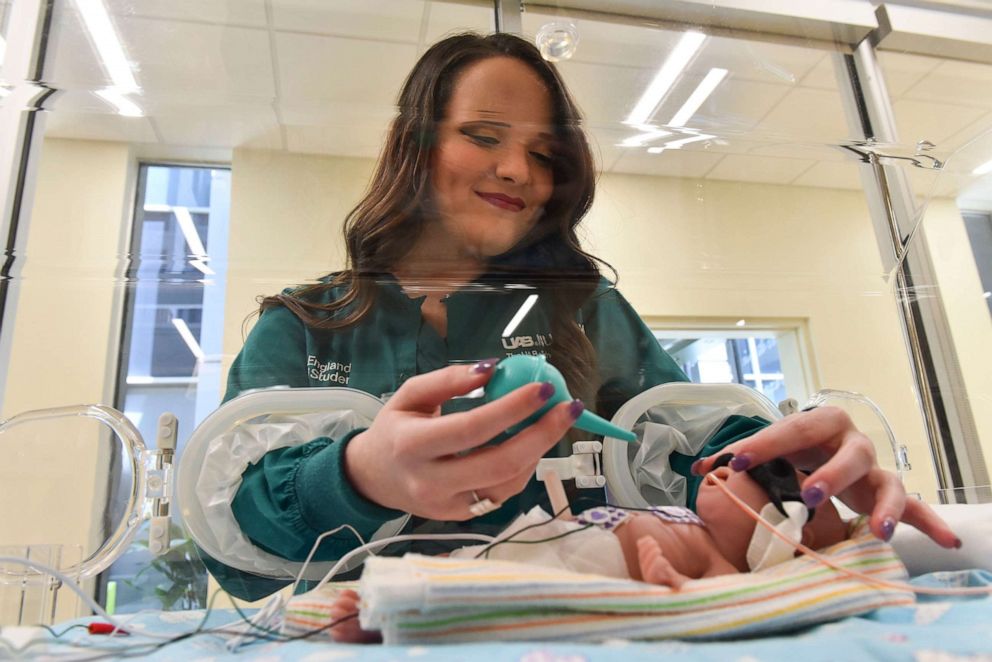 Frank Couch/UAB School of Nursing
Jade England is following in her mother's footsteps as a NICU nurse. England just began her new job as a nurse at the UAB Women and Infants Center's Regional Neonatal Intensive Care Unit.

“I was always interested in anatomy and things like that and I learned how to suture when I was little. I was just always so infatuated with medical stuff,” Jade England said. “I was telling my mom like, halfway through college, I was like, ‘Mom, I can't see myself doing anything else. And she said, ‘That's how you know that you're doing what you're supposed to be doing.’”

And although Taylor England thought she might also become a nurse too, she realized while at UAB that she really enjoyed studying the brain instead and hopes to become a child psychologist.

“I still want to help people. That's definitely a trait within all three of us that we share,” Taylor England said. “I kind of wanted to find a different way to do that.”

As the twin sisters celebrate their undergraduate graduations this month, they’re looking forward to their bright futures. 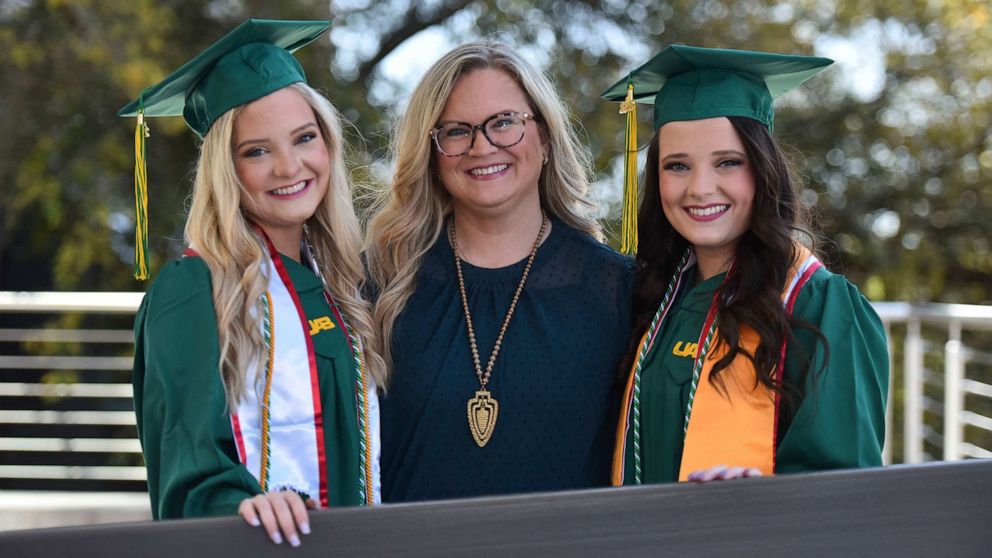 Frank Couch/UAB School of Nursing
Tara Wood (center) with her twin daughters, Taylor England and Jade England, who both graduated from the University of Alabama at Birmingham this spring.

Jade England will soon start her new job as a nurse at the UAB Women and Infants Center’s Regional Neonatal Intensive Care Unit.

“Going into the NICU, I know that I can share my own story and give these parents hope and show that miracles are possible and also tell them that I also know how they feel as a parent because of my mom's story that she's told me of how she felt in the NICU,” she said. “So I feel like I can see it both ways and help the families both ways.”