Her plea first went viral in 2017, but each year since, right around Christmas time, Megan Dunn has people from all over the world reaching out to her about her message.

"I can not stress this enough. STOP TELLING YOUR SANTA AGE KIDS THAT THEIR IPADS, AND IPHONES, AND 200 DOLLAR TOYS ARE FROM SANTA," Dunn wrote on Facebook in December 2017.

"CAUSE SOME FAMILIES CANT AFFORD THAT. LITTLE KIDS WONDER WHY THEY GOT SOCKS OR A COAT OR HAND ME DOWN TOYS FROM SANTA AND OTHER KIDS GOT AN IPAD. This is the second year I’ve had a parent cry to me telling me that their kid asked if they weren’t good enough or if Santa didn’t like them as much. Breaks my heart for the parents and the kids. SO TAKE THE CREDIT FOR THE GIFT. SANTA DIDNT BUY THAT IPAD MOMMA DID OR DADDY DID. Leave the less expensive gifts from Santa. Be blessed you can afford what others cannot," she wrote.

A social worker in Owensboro, Kentucky, Dunn told "Good Morning America" she was inspired to write the post when a child said to her, "I hope I’m good enough this year to get a Buzz [Toy Story] action figure. I don’t remember what I did wrong last year, but I only got socks and some candy.”

It wasn't until that moment, she said, "it dawned on me that in his little mind, Santa was this magical being who had no socioeconomic limit, and that he truly believed that if he was 'good enough' Santa would be able to get him the toy he always dreamed of because with Santa money isn’t an issue."

(More: Momtroversy: How many Christmas presents should you give your kids?)

Dunn said that the parent she referred to her in her viral post was a single mother working two jobs, had two children and made roughly $16,000 per year.

"Poverty has become a child welfare issue in my area, due to people’s electricity being cut off, or water turned off, children are often removed despite no abuse, due to inability to meet the child’s needs," she said.

The families Dunn works with are living well below the poverty level.

(More: Family who went viral trying to get kids to smile for Christmas photo 'only getting weirder')

In the two years since her post, many people have been inspired to do good for others. A man saved a family in Dunn's hometown from having their home foreclosed on, she told "GMA." Many people were inspired to adopt other families for Christmas.

"In 2017 and 2018 I used the popularity of the post to connect families from different states in order to purchase Christmas gifts by using site to store," she said. "For example if someone from New York messaged me and wanted to sponsor a family in need for Christmas -- I would connect them to a family who was in need of assistance from Florida. The sponsor family would purchase gifts for pickup at the Walmart or Target in the area of the family in need to be picked up in time." She was able to help a family in every state in just eight days, she said.

But it hasn't been all positive. Dunn has received backlash for her plea, some going as far to wish her and her children death for being a "Santa socialist." 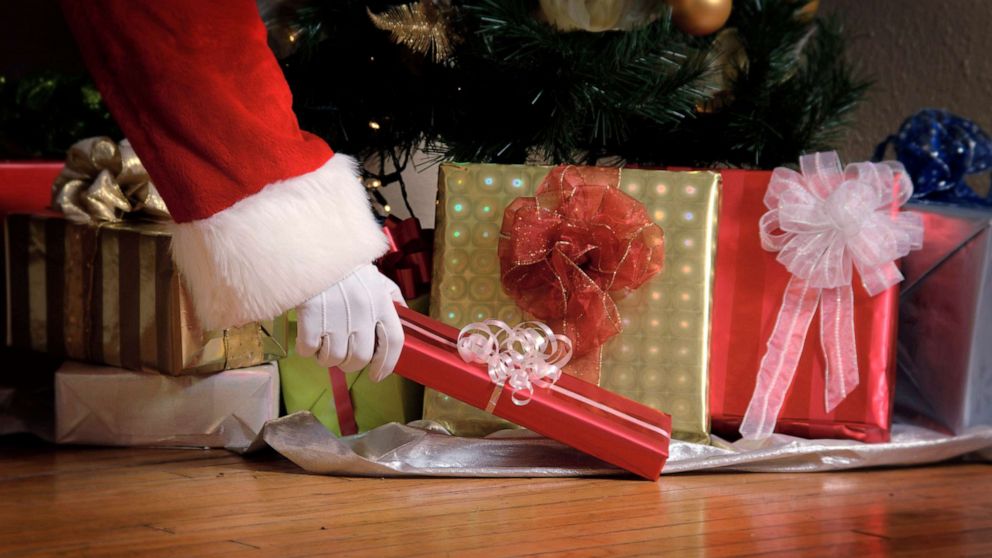 "I would never tell a parent not to spoil their child or suggest that they should buy them whatever is on their child’s list. I just wish parents would take credit for the expensive gifts, and leave the more simple, less expensive gifts from Santa," she said. "Not that they shouldn’t get the iPad or hoverboard -- just asked that the parents take credit for that high price tag gift -- still spoil their kids for Christmas, but maybe spare another child’s feelings in the process."

Dunn said her favorite reactions to her post, though, are people who see it and have an "ah-ha moment."

"One man said that his mom used to sew his clothes and his clothes never fit as they were hand-me-downs, so after reading my post he asked his children if any of the kids in their class wore too big or small clothes or had to walk to school," she told "GMA." "The kids said yes and the dad knew those indicators of poverty because he had grown up poor, but now was wealthy. So the dad told his kids how they grew up and they immediately sprung into action and bought Christmas gifts for the other children in his child’s class. It was like this beautiful pay it forward kind of moment."