Parents bringing treats on board a plane to preemptively butter up their fellow passengers in the case of their kids being disruptive is, depending on whom you ask, a sweet gesture or completely unnecessary.

The hot-button debate was sparked after one parent's long flight from Seoul to San Francisco.

"A mother handed out more than 200 goodie bags filled with candy and earplugs, in case her 4-month-old child cried during the flight," Dave Corona wrote on his Facebook page. "A very touching gesture by the mother, but as you know, when you have kids, expect the unexpected. Not a peep out of the kid."

Corona, a father of twins, told "Good Morning America" it was a "wonderful gesture."

But many mothers disagree. The question of whether it was a good idea was met with a flood of negative responses on a New York City moms' Facebook group.

(MORE: This mom KonMari-ed her life and here's what happened next)

"Babies and families are 100% allowed to travel just like anyone else and no parent should ever be made to feel bad or guilty or mandated to placate grown adults with candy or treats," wrote one.

"I find this absolutely infuriating," wrote another. "Our culture (here in America) has gotten out of hand. Babies, children are humans. Adults need to have more compassion and concern for fellow little humans."

(MORE: The 'fiver' and other kids' birthday party trends)

Many people responded that the stress of flying with their kids was already sky-high and having to buy treats for fellow passengers was just one more thing they don't need on their to-do list.

Still, Ronita Kalra is one mom who provided chocolate to the people seated around her daughter.

"It was simple enough to do and everyone appreciated it. It breaks the ice easily," she told "GMA." "Kids will be kids but someone else’s experience can be ruined because of your kid and some chocolate can make it a little sweeter." 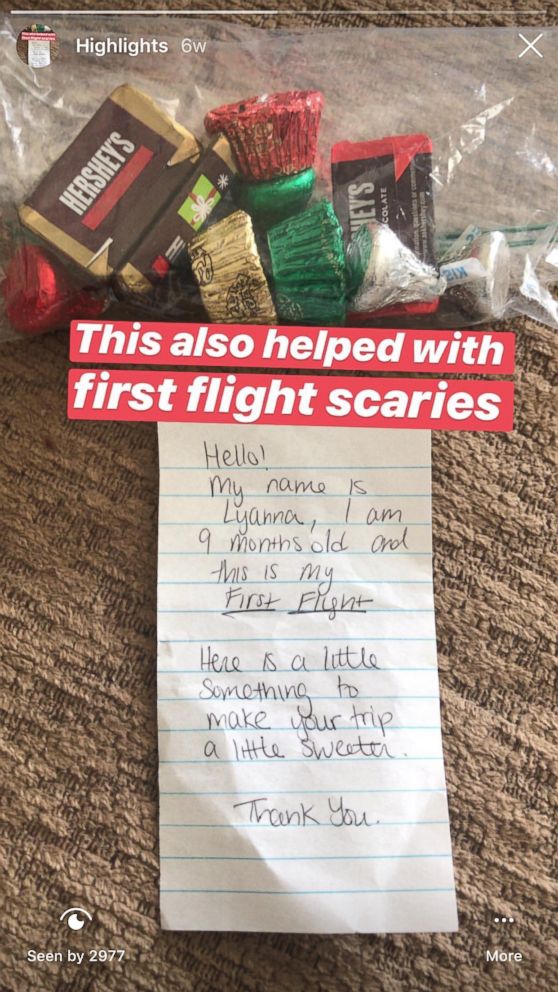 Ronita Kalra
Ronita Kalra passed out candy to the passengers sitting near her family on her daughter's first flight.

At first, the fellow passengers were a little confused, Kalra said.

But, "as soon as they read the note they were delighted and super friendly," she said.

"They immediately asked questions about the baby and said hello to her," she added.

Emilie Adams is the founder of The Connected Birth, a birth doula, childbirth educator and a lactation counselor. She's also a mother of two children who has traveled extensively.

"So many people have and have had young children," she said. "They have been in our boat and are way more understanding than new moms know. There is so much anxiety around being a parent to young children and this idea that we are inconveniencing others, this is simply not true.

"We cannot control how other people will react to us," she added. "We can only control ourselves. Do your parenting thing, fly and move on with your life."

On the other hand, if it's something that's going to make the parent feel better, go for it, Adams said.

"Just don't think that this is something you have to do or that is expected of you," she said.