An image of a Maryland woman working from her bathtub has led to a reflection on the child care crisis caregivers have faced since the onset of COVID-19, and what leaders are doing to change it.

At the height of the pandemic, Heidi Metcalfe Lewis, a mother of two from Silver Spring, was photographed by her husband after she had set up a work space in her bathroom. Seen nearby was her 1-year-old daughter playing with a water table toy.

Lewis' attempt to occupy her toddler while tackling workday tasks was dubbed a familiar scene for the millions of parents who were left without options when a majority of day care centers closed and schools turned to remote learning.

Pictured, me -- keeping my head above water, but only just. Not pictured, the 2.4 mill mothers that have left the workforce since the pandemic started.

This is why we need a #MarshallPlanForMoms
Bc "motherhood isn't a favor and it's not a luxury; it's a job" @reshmasaujani https://t.co/ZVAb53TGt2

The picture stirred up conversation on Twitter after it was shared by Reshma Saujani, the founder and CEO of Girls Who Code and a mom of two, who is leading the "Marshall Plan for Moms," an initiative to return mothers to the workplace and pay them for the work they do at home.

"It took on a life of its own from there," Lewis told "Good Morning America." "We're all showing each other how burned out and exhausted we are, but what's being done? I don't want a Hallmark card, I want a policy change."

On April 28, President Joe Biden laid out his $1.8 trillion American Families Plan, which aims to invest in child care, education and the country's overall economic future.

Biden's plan is to create free, universal pre-K for 3- and 4-year-olds and fund two years of free universal community college. The plan would cap how much low- and middle-income Americans must spend on child care, extend Affordable Care Act tax credits and expand paid leave.

To create universal free pre-K, the American Families Plan envisions a federal-state partnership where states would initially be responsible for 10% of the funding, which would eventually scale up to 50%. If states choose not to opt into the program, a senior administration official said they would "work directly with a locality on preschool," ABC News reported last month. 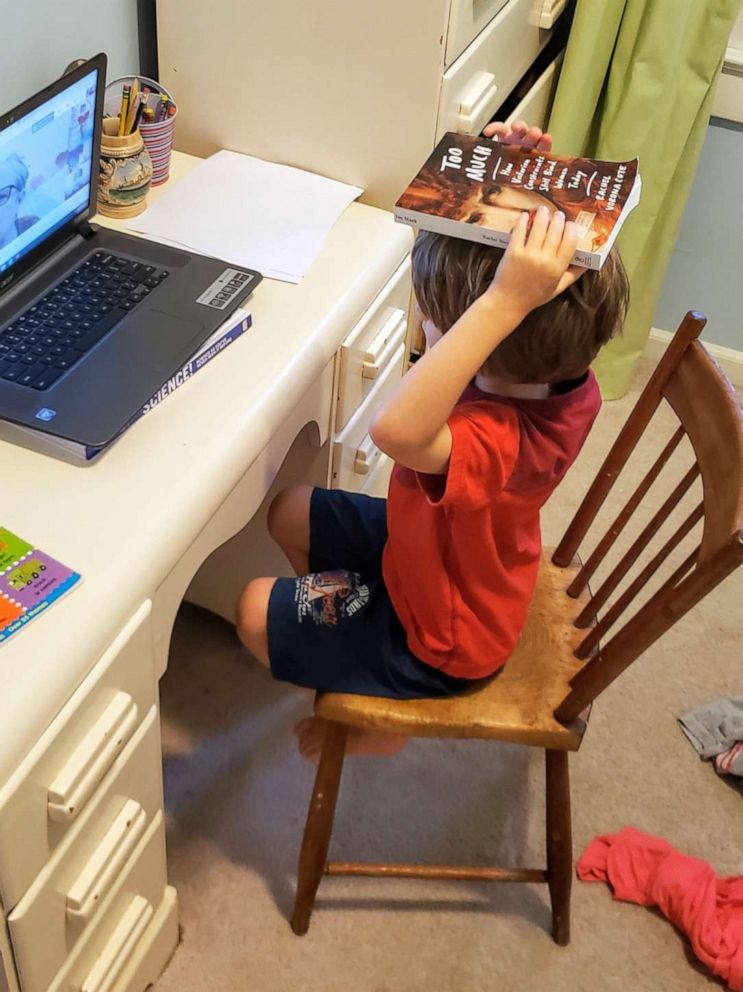 Lower-income families' child care costs will be completely covered, while families making up to 150% of a state's median income will be capped at paying 7% of their income for child care. Families could choose between child care centers, family child care providers and Early Head Start.

Before the pandemic, Lewis and her husband were spending 40% of their monthly income on child care, though their children's education and time with peers is a priority, she said.

In November 2020, the National Association for the Education of Young Children surveyed thousands of programs across the country. Of the survey's respondents, many reported "resorting to desperate measures to stay open," such as engaging in layoffs, pay cuts and taking on debt to keep their programs afloat.

Nationwide, nearly half of child care providers completely closed their facilities during the COVID-19 shutdowns last year, according to a survey by the National Association for the Education of Young Children.

Of those that stayed open, 85% had been operating with less than half of their usual child enrollment.

These closures, as well as schools adopting remote learning models, were arguably a main cause for more than 2 million women leaving the workforce in 2020 alone, according to the National Women's Law Center. 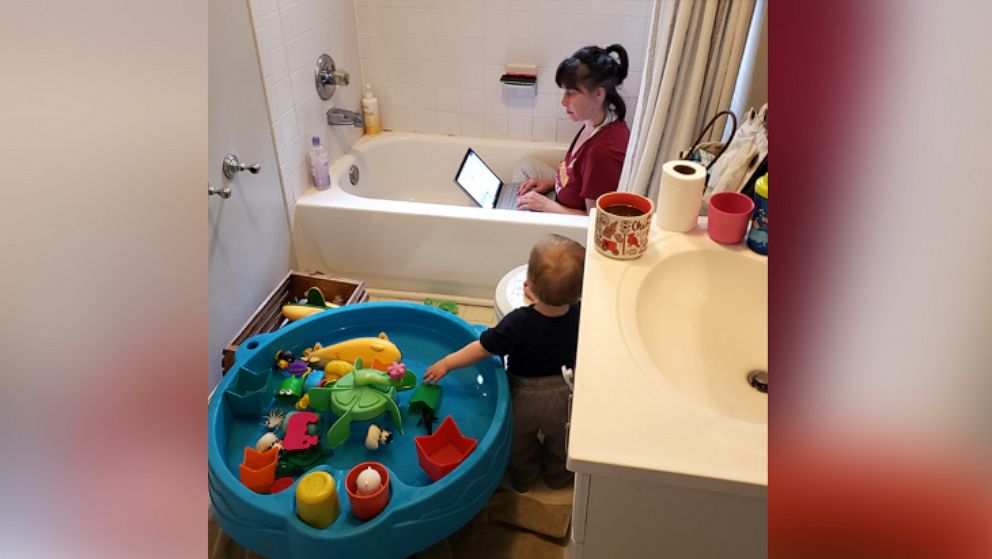 Courtesy Heidi Metcalf Lewis
Heidi Lewis, a mother of two, is seen working from home in Silver Spring, Maryland, amidst in-person child care and school closures, April 2020. Her 1-year-old daughter Harriet is seen playing beside her in the bathroom.

Lewis said her employer, an independent bookstore, didn't lay off a single employee and instead she was able to work from home. While Lewis was grateful for the flexibility, she was faced with balancing her career with caretaking duties.

"I think a typical day was chaos, crying and tons of snacks," Lewis said. "The hardest part about having both of them home was they both had wildly different needs."

In March 2021, Ana Rodriguez of San Lorenzo, California, told "GMA" that her employer was allowing her three children to attend virtual school inside the office building where she works.

"The pandemic, it forced women to choose between [our families] and our careers. ... It put us 50 steps back in how we're viewed in society," Rodriguez said.

MORE: Ricki Lake opens up about 'dark times' and healing after her husband’s suicide: 'I now truly love myself the way he loved me'

Rodriguez said her kids have returned to in-person learning four days a week. She said she's glad that Biden's initiative is putting a spotlight on women.

"We weren't acknowledged and it was the most inconsiderate situation we've ever been in," Rodriguez added. "I'm honored that he's at least acknowledging how much women do."

Rodriguez admitted that most of the child care had fallen on her, though her job lends itself more to being a parent amid COVID-19 than her husband's does, she said. 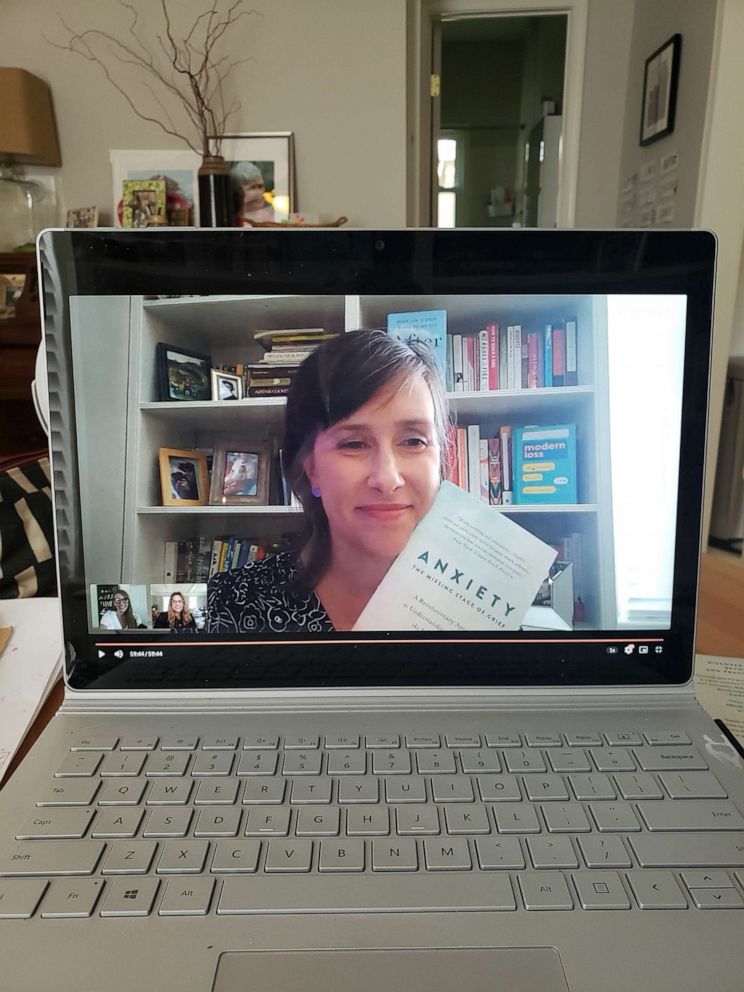 Lewis said that when her kids' schools closed last year, her husband had started a new job.

"I wanted to give him the space to prove himself," Lewis explained. "Did I willingly take on this unpaid labor? Yes. But we were in a crisis, and needed his income. We have a pretty good balance of labor but [as for] the emotional labor, I carry it."

Lewis said she feels the pandemic put a spotlight on structural sexism, which is why her bathtub picture garnered so much attention.

"It's the way the system is. We're have to prioritize his work ... and men make more than women. We all know that, and here we are living in the imbalance and it feels more urgent and broken," she said. 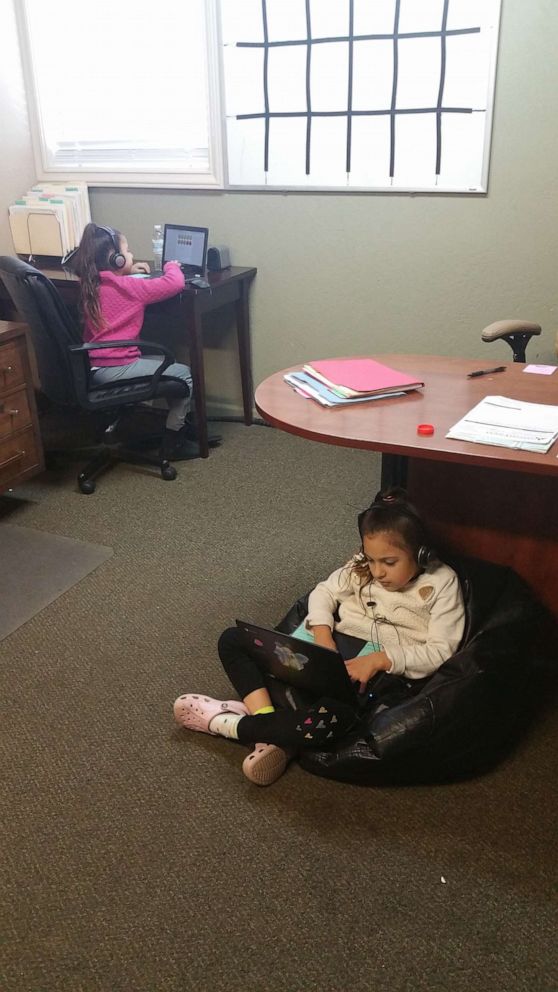 In January, Saujani and her nonprofit took out a full-page New York Times ad urging political leaders to institute a Marshall Plan effort that would provide a means-tested $2,400 monthly payment to moms and would be led by a "caregiving czar" tasked with implementing workplace benefits like parental leave, affordable child care and pay equity.

The 1940s-era Marshall Plan was a multibillion-dollar U.S. program that helped to rebuild the economies of Western Europe after World War II.

Advocates like Saujani say just as drastic and intentional an effort is needed today to help working moms, many of whom have seen their careers decimated by the pandemic.

We're calling on the Biden Administration to create a task force dedicated to passing a #MarshallPlanForMoms—a 360 plan that gets women back to work that includes basic income, paid leave, retraining programs, school reopening plans, & more.

We don’t value what we get for free. pic.twitter.com/WsJtGfrlpf

After the the Biden-Harris administration announced its plan for addressing the child care crisis, Saujani took to Instagram writing, "It’s a huge deal."

She went on, "And remember: the pandemic hasn't just forced women out of work -- it's also forced women and girls out of school. Investing in education is ALSO a win for women and moms."

Since her viral work-from-home moment, Lewis has used her voice in hopes to spark change. She said that prior to Biden's new initiative being announced, an activist group called Moms Rising encouraged its members to contact their state representatives about the child care issue.

Lewis wrote a letter to U.S. Rep. Jamie Raskin, D-Md., to alert him that child care was not listed on his website as an issue that required attention.

Raskin told "GMA" he's been making it a point to call parents who reached out with concerns, including Lewis. 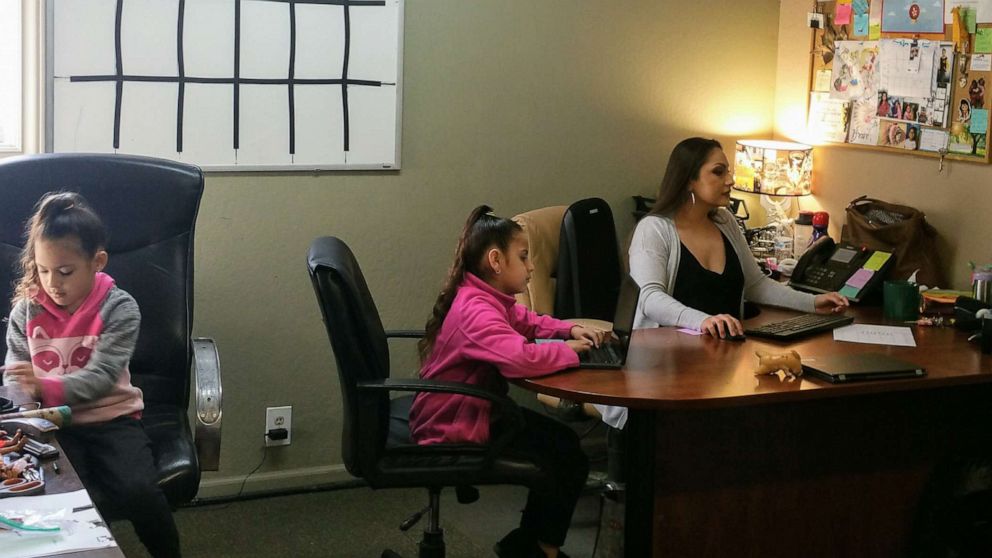 "Hers was a very eloquent voice early on in the crisis saying we need to focus on this as a real problem," Raskin said. "It's not just a problem for families. It's a problem for the economy [as] several million women left the workforce during COVID-19."

Raskin said he feels the U.S. is now headed in the right direction with the American Rescue Plan being signed into law, which is projected to lift more than 5 million children out of poverty this year, and the American Families Plan.

In addition, Raskin said the extended Affordable Care Act tax credits are going to help more than 100,000 kids in his Maryland district alone, with an extra $300 per month per child.

@POTUS’ leadership is great news for our families, our children, our economy, our democracy, our country, our world. https://t.co/jzP46L3USq

"It's a huge investment, but other than unemployment benefits, child care were the two things I heard most about from my constituents during COVID," Raskin noted.

"Child care can be such an amazing opportunity for a society to use the best research on child development, socializing skills and healthy practices," he added. 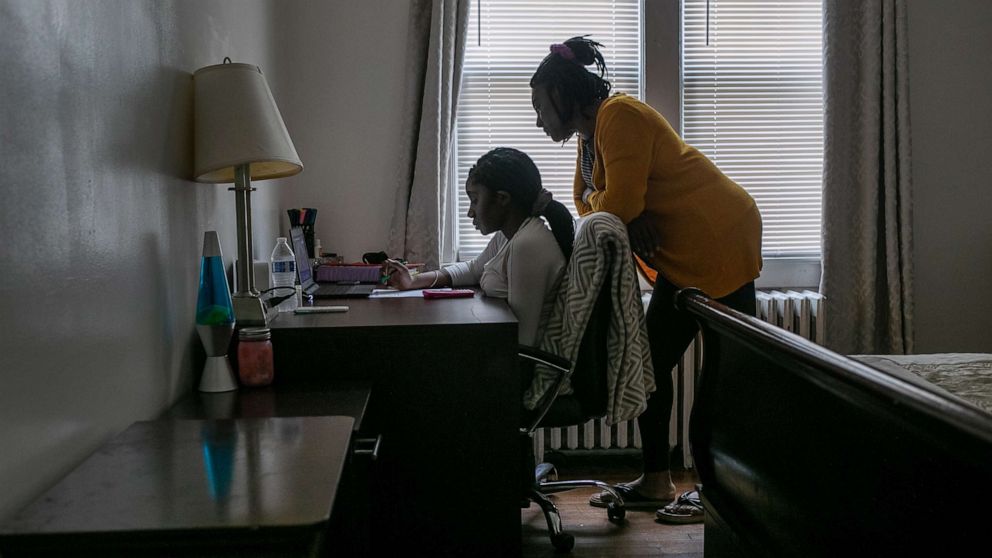 John Moore/Getty Images, FILE
Abigail Previlon, 13, takes part in remote distance learning on a Chromebook with the help of her mother Carlene at home on Oct. 28, 2020, in Stamford, Conn.

Lewis said her 6-year-old son Charlie began remote learning in the fall. Harriet has returned to her school as well.

"Working moms need everything in the American Families Plan -- and we needed it before the pandemic -- but we also need fully operating K-12 schools," she added. "I want to hear the representatives I voted for explore why school closures happened [and in some cases are still happening] and start to hold people accountable."