After a grueling two-year cancer battle, an inspiring young patient had her lifelong wish come true to become an honorary chief officer of the New York Police Department.

"The look on her face was something I won't forget"

Aniya Ardon, 9, left New York-Presbyterian Morgan Stanley Children's Hospital in September after fighting medulloblastoma, a type of brain tumor. Aniya left to live at home with her mother and is still battling cancer.

What Aniya thought would be her last day at the hospital turned into a surprise ceremony, where she was dubbed honorary chief officer of the police force. 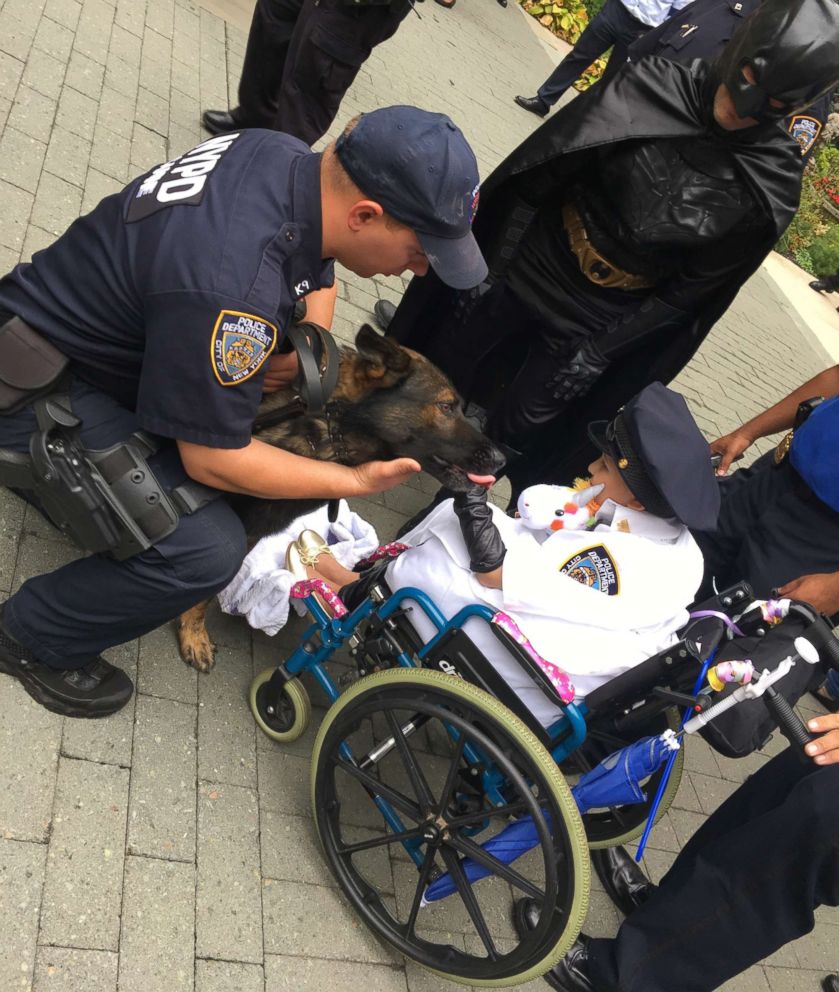 "The whole surprise was something that we pulled together in 12 hours," Stacy Britsch, a nurse and Patient Care Director in New York-Presbyterian Morgan Stanley Children’s Hospital Pediatric Oncology unit, told "GMA." "Aniya knew something was up when we first gave her some presents, like a Cat Woman costume and makeup, and then we took her outside to the officers who were waiting to take her to the garden for her ceremony. It was very emotional."

The police officers gave her a plaque, and had her take the oath of becoming a chief officer.

"After she received her plaque, she snuggled up to her mom and put her head on her shoulder," Britsch shared. "It was such a special moment for them that really stands out when you think about that day."

Britsch said that Aniya was "overwhelmed" and she cried when she was surprised by her loved ones, the hospital staff, NYPD officers and even the K-9 unit. 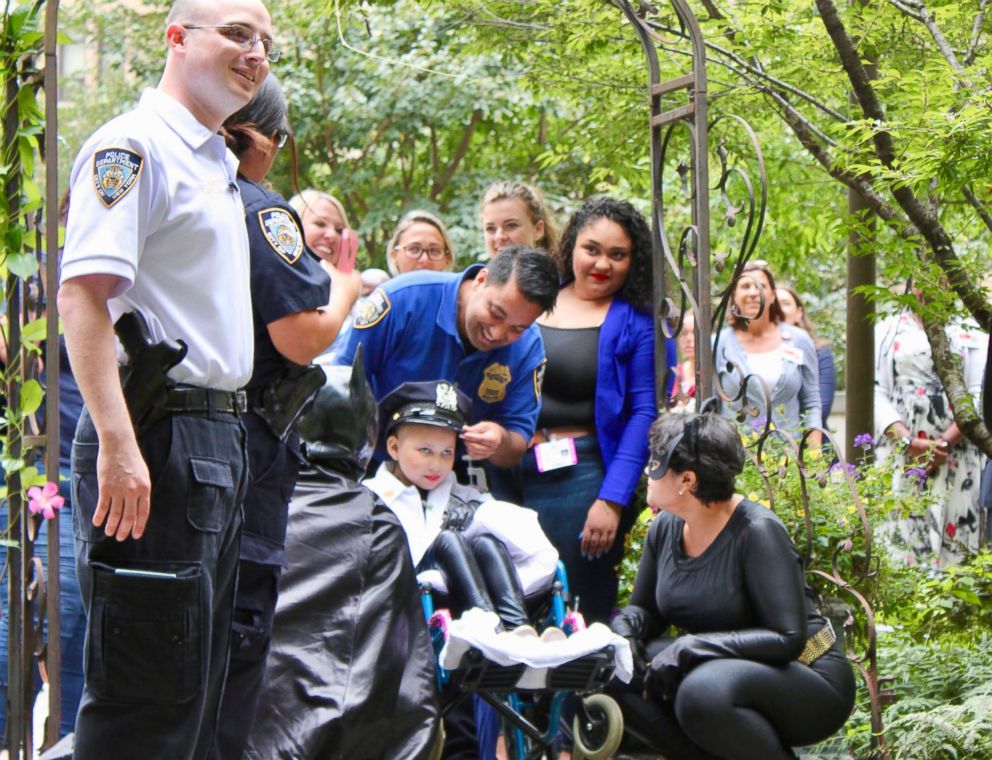 "Even though it was a sad day, it was powerful to make these kinds of things happen for our kids," Britsch said. "The look on her face was something I won't forget."

The NYPD recently created an organization called the Building Future Community Leaders, where they take patients who are interested in law enforcement on fun day-trips and make them honorary NYPD officers.

The police force's Sgt. Zagham Abbas and Officer Anthony Passaro heard about Aniya's wish through family connections, and felt inspired by her strength to do this for her.

"Aniya is a fighter. She's a brave girl who has been through a lot, which has given us motivation," Abbas told "GMA." "She is giving a lot of people hope."

The police officers immediately knew this was something they wanted to do, not just for the young patient, but also for her mother, who's been at her side throughout her cancer battle.

"I felt good, because I can imagine what the families go through there day in and day out," Abbas told "GMA." "Just to give them happiness for the day means a lot to me. The moms and dads are the heroes themselves because they do this for their kids."

"She's a brave girl who has been through a lot, which has given us motivation." 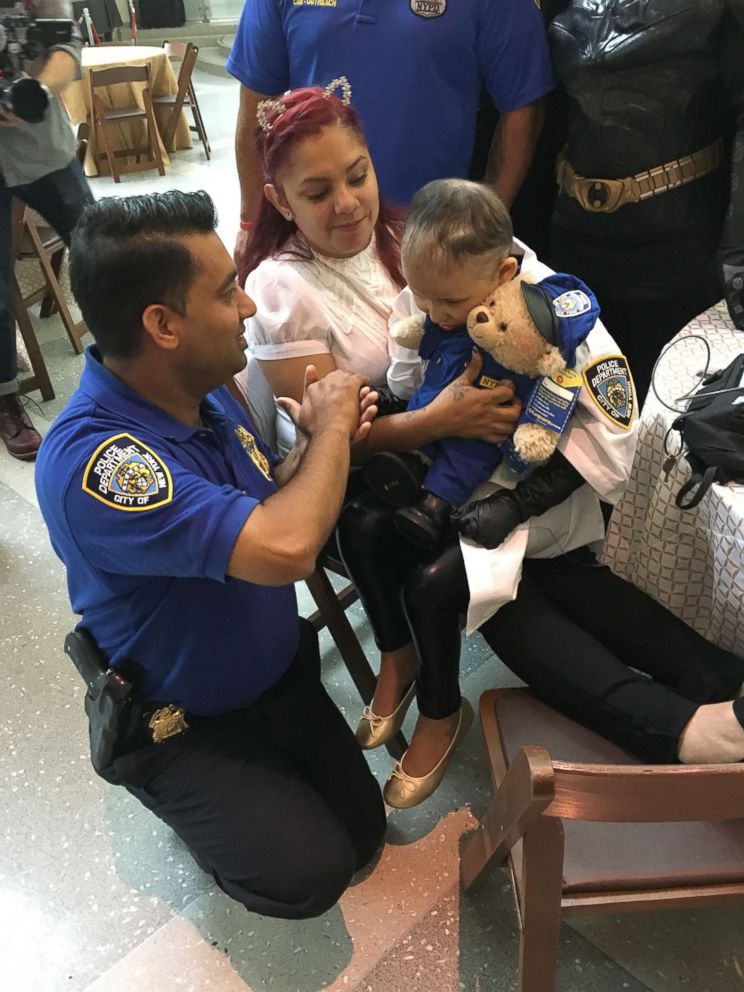 Passaro said that it felt "incredibly amazing" to be part of the team that made Ardon's dream come true, and that the event sparked a friendship between him and Aniya's family.

"We talk all the time on the phone," he said.

This was the first time that the New York-Presbyterian Morgan Stanley Children's Hospital and NYPD have joined forces for this type of event.

"This," Britsch said, "was a day that no one will forget."