An Oklahoma school is recognizing a hero student who came to the rescue of a classmate who began choking during a recent lunchtime meal.

Jordan Nguyen, a music teacher at Lakeview Elementary School in Norman, Oklahoma, a city about 20 miles south of Oklahoma City, was in the school's cafeteria when the Sept. 15 incident occurred and told "Good Morning America" it all happened in a matter of seconds.

"It was chicken nugget day and the kids absolutely love it. But during that lunch, a teacher's and parent's worst nightmare happened," Nguyen said.

Cashton York, a third grader at Lakeview, was digging into his lunch with his classmates and friends when he "took a bite and started choking," according to Nguyen.

"He couldn't breathe," she added. 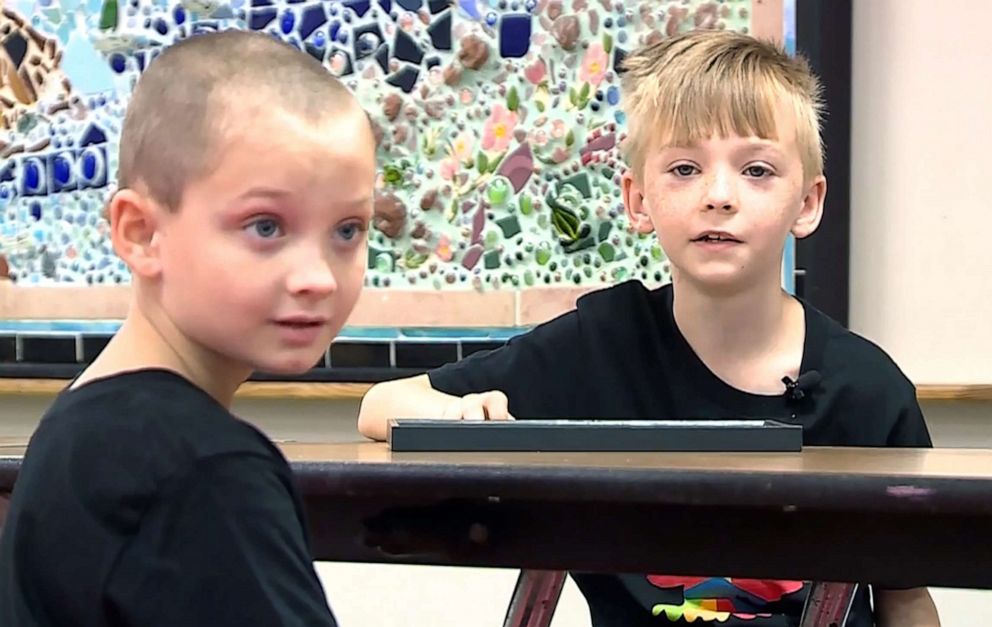 KOCO-TV
Cashton York and Garrett Brown in the cafeteria at their school in Norman, Okla. Brown was honored after he came to the rescue of this classmate, performing the Heimlich maneuver as he choked on some food in the cafeteria.
Editor's Picks

"Immediately, the boys around him stood up and started screaming for help from me, who was the adult in the room at the time," Nguyen said, noting that Cashton had been facing away from her. "I was on the other side of the cafeteria and when I heard them scream, I ran to the students. However, there was one student, Garrett, who went way above and beyond just shouting for help."

MORE: This teacher saved a student from choking. Now, she has a message

According to Nguyen, Garrett Brown, also a third grader, started performing the Heimlich maneuver on his classmate.

"Instead of shouting, he jumped to the other side of the table, went behind Cashton and did a couple thrusts of the Heimlich maneuver, and it only took about two thrusts and he was able to dislodge the food," Nguyen recounted. "By the time I reached Cashton, the food had already dislodged and he was breathing again." 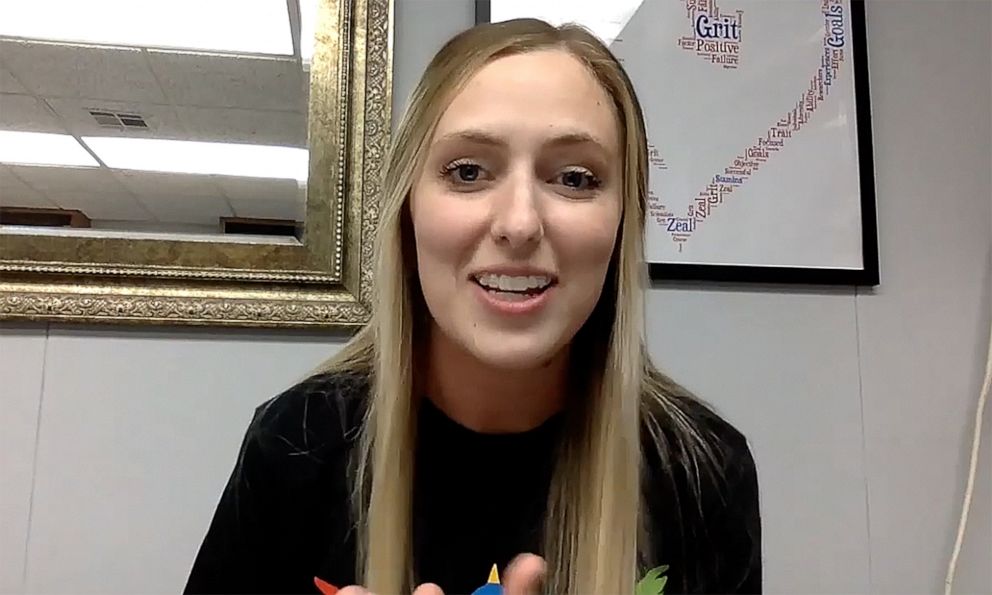 "When it was done, we all took a breath and thought, 'Did that just happen? Was that for real? Did this really just happen?' And we had to go back and watch the security footage just to be sure that 'Oh, that is what happened. Oh, my goodness,'" Nguyen recalled. "It was pretty mind-blowing."

After the harrowing incident, Nguyen said she took a frightened Cashton to see their school nurse, who examined him and notified his parents. The boy, who Nguyen said was initially upset and crying, was checked out and it was determined he was "perfectly fine."

After about 15 minutes, Nguyen said Cashton had returned to the cafeteria to eat a new plate of chicken nuggets.

Cashton's mother, Tiffany Smith, told KOCO that she was thankful Garrett was able to spring into action when her son started choking. 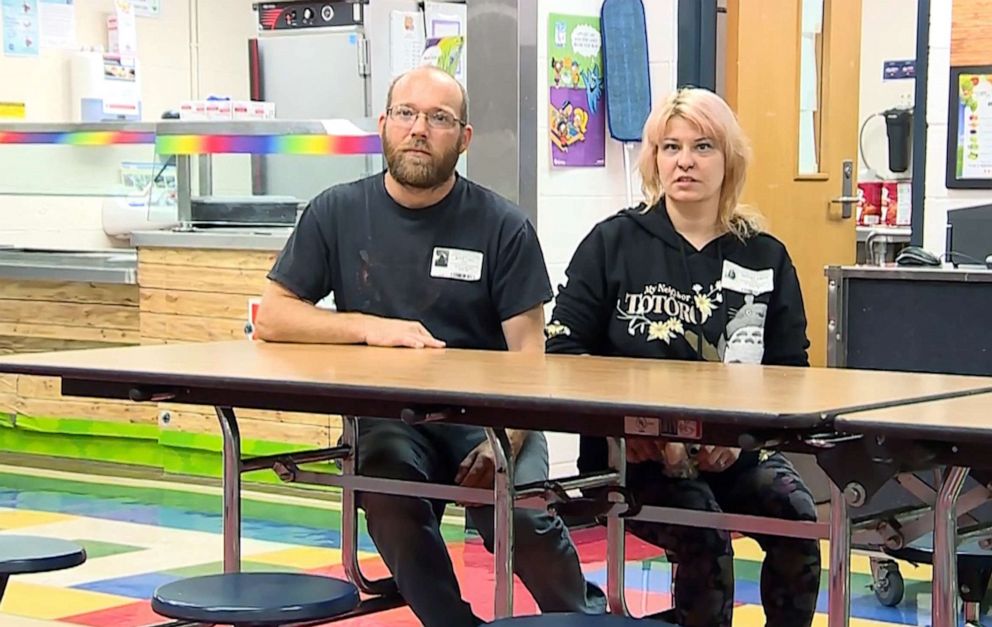 KOCO-TV
Cashton York's parents, Jesse York and Tiffany Smith, say they're grateful for Garrett Brown for jumping into action when their son started choking at school, in Norman, Okla.

"That was extremely scary to know that in a matter of seconds, my child could have choked to death on food at school when you're not around," Smith said. "There's not enough words to be grateful for saving him."

At a school assembly last Friday, Lakeview Elementary honored Garrett for his quick actions to save his friend. Nguyen presented Garrett with a special "Hero Award" certificate on behalf of the school. 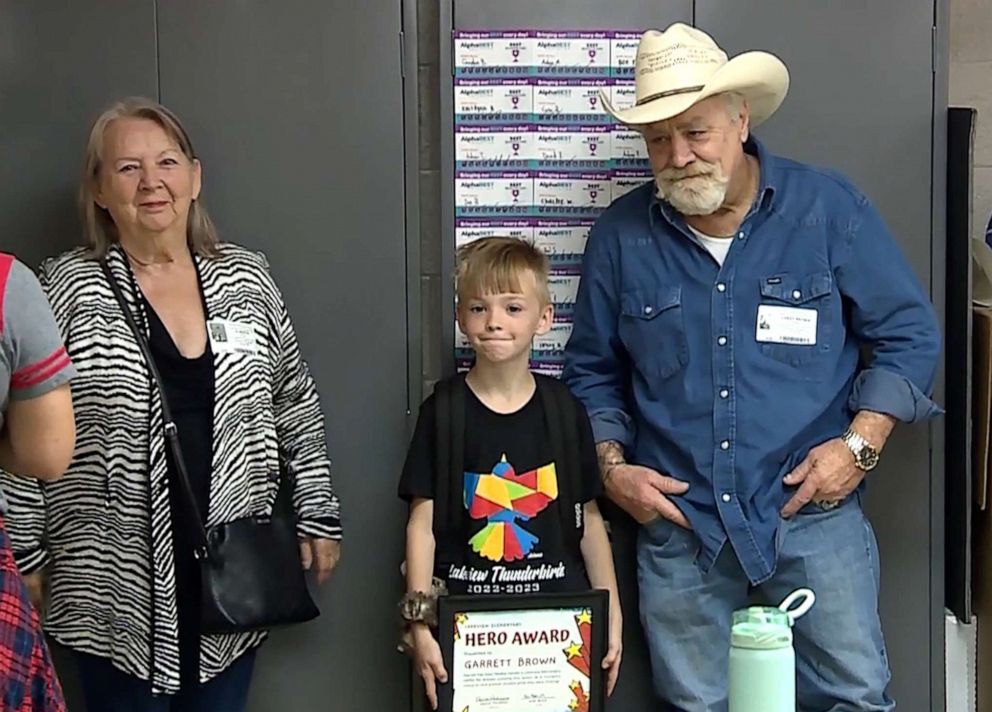 KOCO-TV
Garrett with his parents at an assembly at Lakeview Elementary School where he was presented with a "hero award" for helping to save a choking classmate, in Norman, Okla. 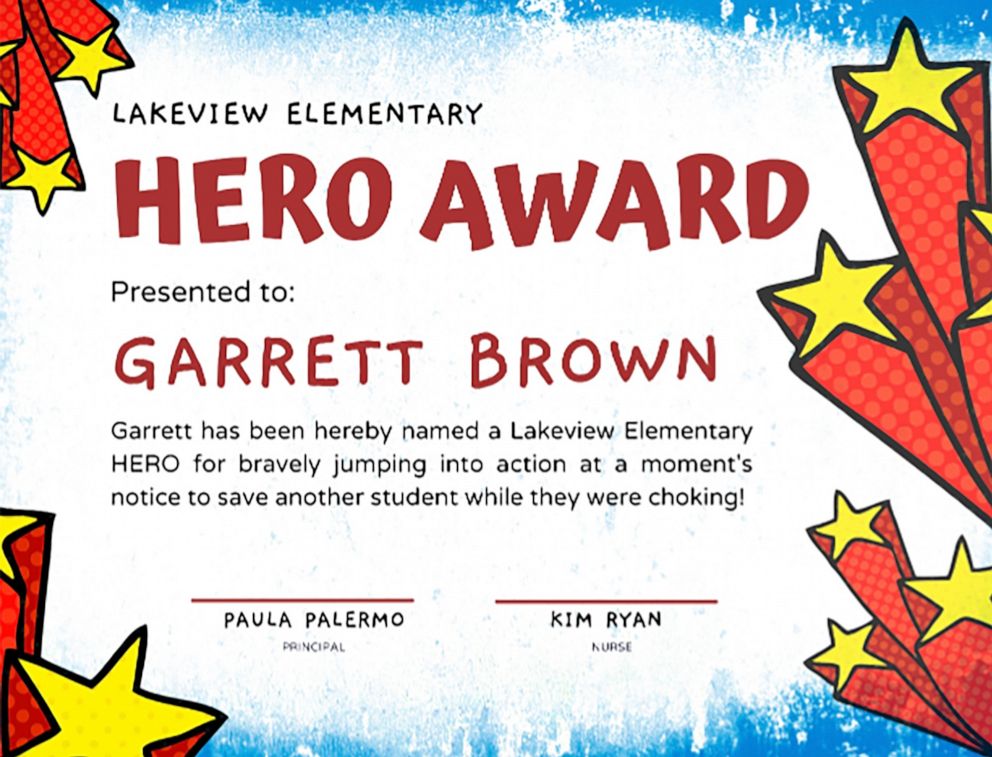 Courtesy of Jordan Nguyen
A certificate presented by teacher Jordan Nguyen to Garrett Brown, a boy who saved his classmate from choking. 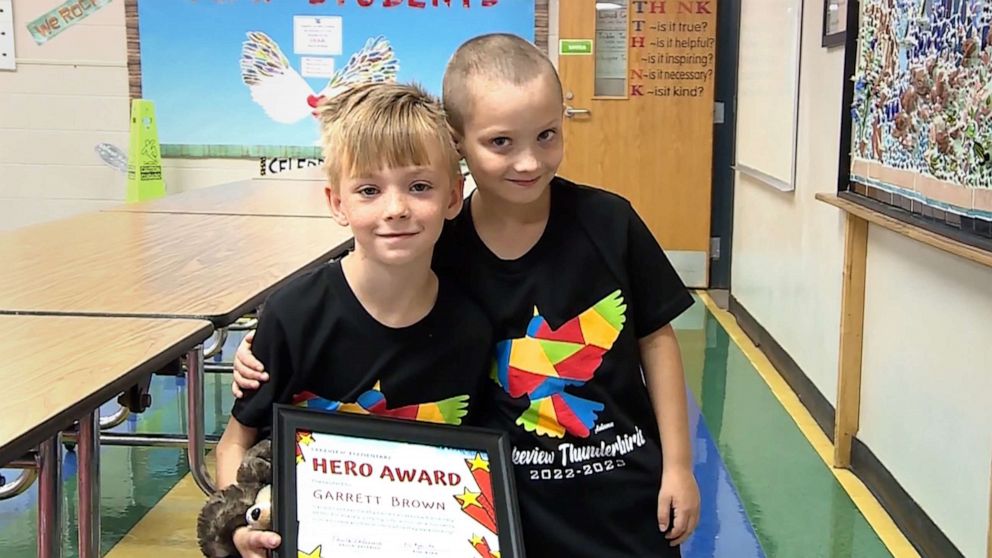 KOCO-TV
Garrett Brown holds his "hero award" certificate as Cashton York poses alongside him, at their school in Norman, Okla. Brown was honored after he came to the rescue of this classmate, performing the Heimlich maneuver as he choked on some food in the cafeteria.

"We surprised Garrett. He did not realize that he was getting that award that day," Nguyen said. "The Norman fire department and police department came out to also congratulate him and it was funny, both departments told Garrett that they have a job lined up for him whenever he gets older … he was so proud and so excited."

"I think he definitely has a future in some sort of life-saving career," Nguyen added.

Following the incident, Nguyen said the staff at Lakeview are planning to hold first aid courses for students at the school.

"We're starting to do extra classes, life skills sort of things, and one of the classes that we plan to offer is a basic, kid-friendly first aid class," Nguyen said. "That way, if they are out somewhere or if they're home alone, or if they're home with their siblings and something does happen, they'll know what to do."