Soccer star Alex Morgan is no stranger to enthusiastic fans but one pint-sized supporter ended up getting a very special shout-out after cheering her on from the stands.

Two-year-old Luca had the opportunity to watch the forward play recently in Monterrey, Mexico.

Morgan, a member of the U.S. women's national team who plays for the San Diego Wave, has been in Mexico for the CONCACAF W Championship, and Luca and his family went to see the Americans take on Haiti on July 4.

Luca might as well be Morgan's biggest fan, and he has his siblings to thank for it. He has three older sisters, 7-year-old Eliana, 4-year-old Rosana and 6-year-old Anabella, the last of whom is a huge fan of the soccer star herself.

"Anabella loves Alex Morgan because of how hard she plays and how good she is scoring goals. She also loves her pink headbands. She has a jersey of Alex Morgan at home. So Luca has heard a lot about Alex Morgan his whole life, and naturally began to like her as well," Luca's mom Ana Camelo Jackson told "Good Morning America" in an email. 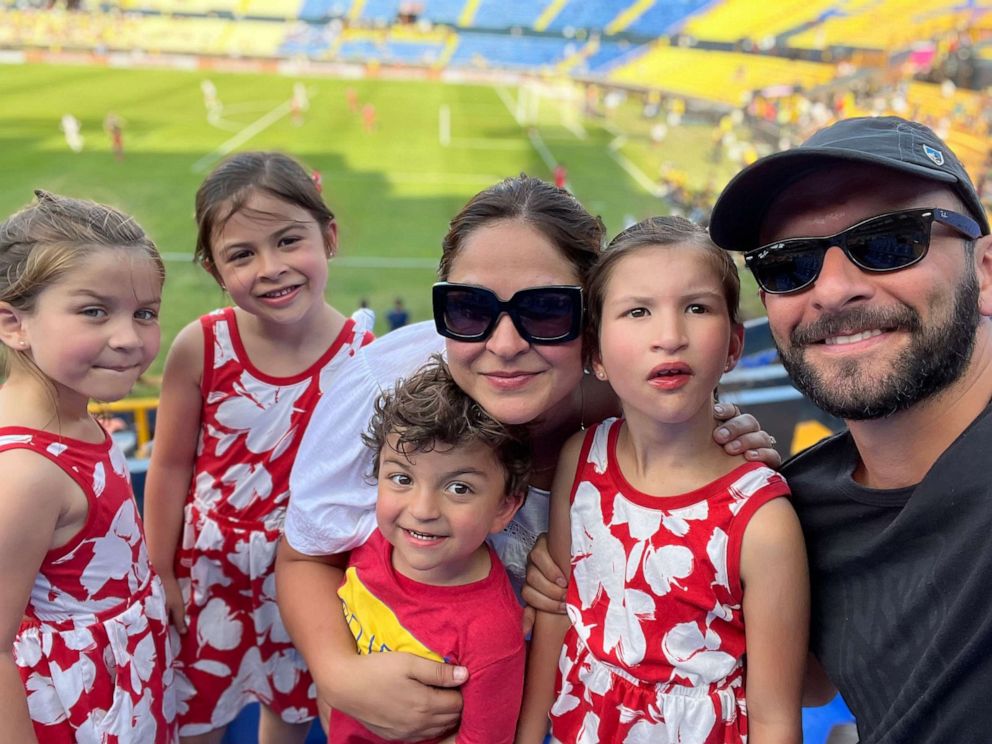 Courtesy Ana Jackson
Luca, his older sisters, and his parents love to catch soccer games in Austin and support the U.S. women's national team whenever they can.

Jackson shared a video clip on social media the day after the game, which featured Luca, wearing a shirt with a sign on it that said "Believe" -- a reference to the AppleTV+ series "Ted Lasso" -- cheering and clapping for Morgan at the top of his lungs from the stadium stands.

"I think when he was screaming her name at [that] game, he increased his intensity because she wasn't turning around," Jackson said. "He really thought she could hear him and that she should respond. So naive and cute."

We celebrated 4th of July in Monterrey by going to a @USWNT game. @alexmorgan13 Luca is one of your biggest fans and loved seeing your two goals ⚽️ pic.twitter.com/vOH6r3yZy2

Morgan scored two goals during the first half of the USA-Haiti match, helping to lead the U.S. to a 3-0 victory.

In all the excitement, the star player still found time to give a shout-out to Luca for pumping the team up.

"Is this not the most adorable thing you’ve ever seen? The shirt! The cheer! Cuteness overload," she said in a TikTok response, sharing Jackson's video.

"His name's Luca. Luca, you'd be besties with Charlie, and tomorrow you have something coming your way so be on the lookout," she added, referencing her own 2-year-old daughter, Charlie Elena. 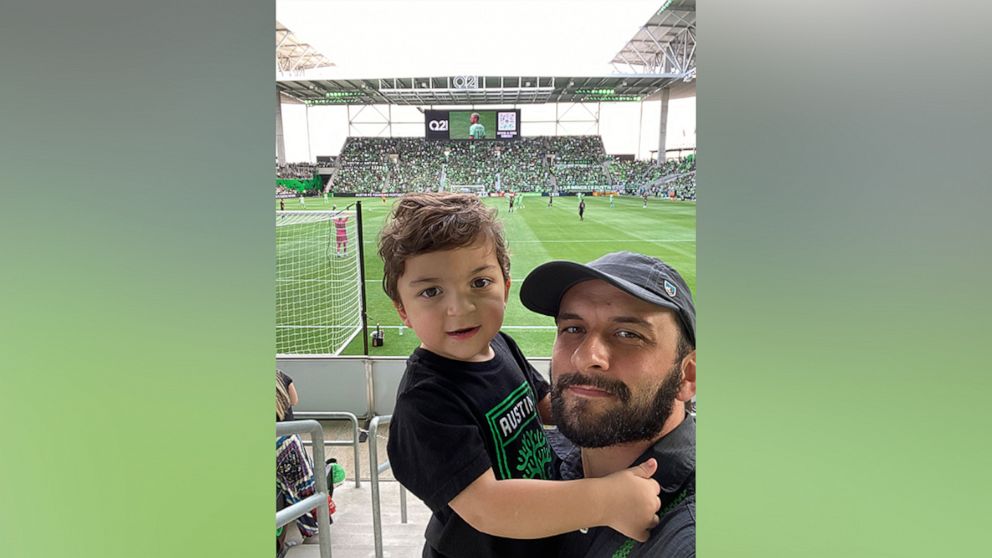 Jackson later shared the TikTok to her Twitter account, writing, "From mom to mom thank you @alexmorgan13!!"

Morgan quoted Jackson's tweet, writing above it, "You're so welcome! I think I can speak for everyone when I say Luca made my day🙌."

Sure enough, as Morgan promised, Luca received a very special present not long after. The USWNT Twitter account shared a video clip Thursday of the boy getting surprised with a new no. 13 jersey -- Morgan's number -- signed by the star herself. 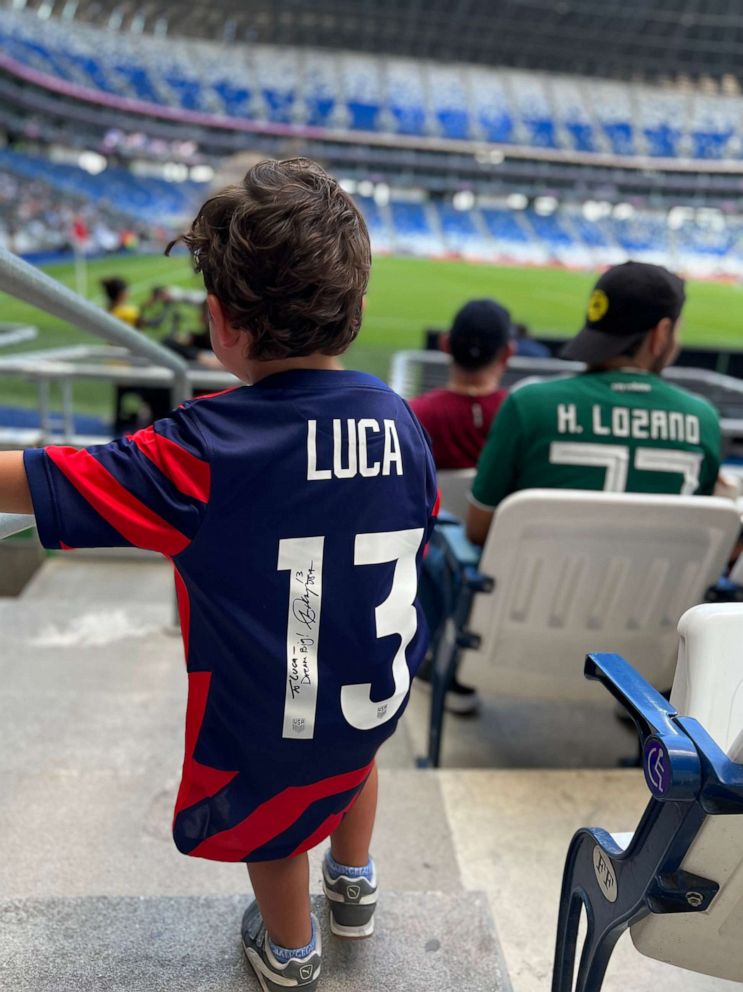 In the video, Luca thanked Morgan for his gift and blew a couple of kisses, too.

MORE: This young Bills fan being surprised with tickets will make you smile

In a follow-up Instagram post Thursday, Jackson opened up about her little boy and said it was "surreal" to see her toddler, who had been born with three congenital heart defects and at one point could "barely catch a breath," cheer for his favorite player.

"He is so full of joy and life and I can't believe the amount of people who messaged me saying Luca made their day. It made me tear up to know how many hearts he touched and that in the middle of so many devastating news he was able to bring some light," Jackson wrote in part.

Speaking with "GMA," she added that Luca "was born with multiple congenital heart defects, and had to undergo open-heart surgery at two weeks of life."

"We think part of him knows that he almost didn’t make it, which is why he has such a passion for life and an amazing spirit," she said. "He makes everyone smile, as this viral experience has shown!"

Luca was eventually able to meet the star player following the team's game against Jamaica on July 7.

"After the game, Alex came over to our section and Luca held his arms out to her," Jackson told "GMA." "She took him in her arms on the field and posed for pictures."

Morgan even walked away with her own special gift: a big hug from Luca himself.

The USWNT has already won the first two of their match-ups at the CONCACAF W Championship against Haiti and Jamaica, and is in prime position to win the title entirely.

On Thursday, the team qualified for a spot in the upcoming 2023 FIFA Women’s World Cup, which will be held in Australia and New Zealand.