Food has a unique way of bringing people together, especially during difficult times, and one woman's mission to feed her community with an Italian classic in the midst of the COVID-19 pandemic has served up a family-sized portion of inspiration.

Michelle Brenner was furloughed in March due to the coronavirus outbreak in the U.S. and decided to pick up a temporary job as a personal shopper through Instacart, to help those in need in the Gig Harbor, Washington area.

Brenner told "Good Morning America" that in her two days of working with the delivery shopping service "I delivered a lot of family-size frozen lasagnas," and while the hearty meal is a great option for folks -- especially as store supplies began to dwindle -- she said it sparked an idea for a fresh alternative.

Courtesy Michelle Brenner
Michelle Brenner, pictured here in an undated handout photo, has been dubbed the "Lasagna Lady" in Gig Harbor, Wash., for her work making and donating the Italian classic for the community.

"I have an issue with frozen foods in general. Plus, I'm Italian," she said with a laugh, adding that her Sicilian family used to get together for weekly meals.

After a customer in his 90s told Brenner he hadn't had a fresh meal in weeks, she went home, made a lasagna and wrote about the experience on Facebook to see if neighbors in need would be interested in her homemade version.

MORE: Restaurant, food service industry has lost nearly $120B due to pandemic

"Something triggered with me that I needed to do more -- I said 'I'm here and if anybody ever wants a lasagna I'll make it," she said of her initial offer to donate the dish to others. "And sure enough, people responded." 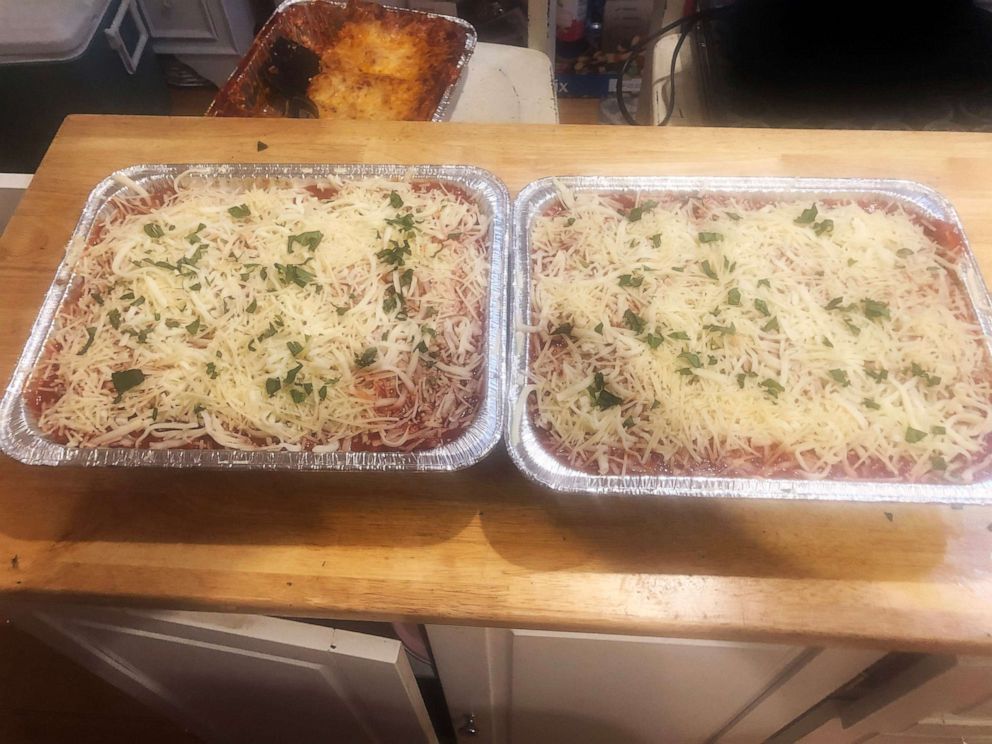 Brenner said she used her stimulus check to buy all the ingredients to bake the riff on her grandmother's recipe and got cooking.

"The little journey began with me delivering lasagnas at first, because people were very afraid to get out at that time. And as it grew I put a little pantry in my front yard and if I knew you were coming I'd put a lasagna out and you'd get it and never cross paths," she explained of the first four weeks. "In the very beginning I was cooking about 14 hours a day."

Her day in a snapshot includes getting all the ingredients together -- tomatoes, ricotta cheese, sheets of pasta, parmesan and basil -- prepping them, assembling them and cooking them. Then, she contacts her customers to arrange the pickups. 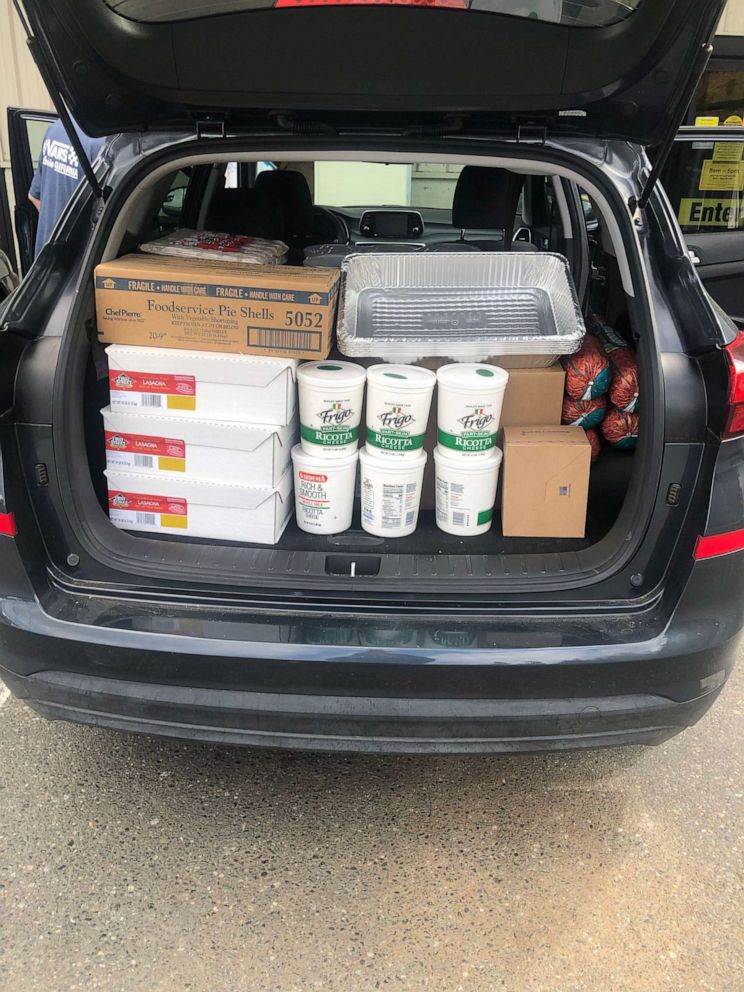 Courtesy Michelle Brenner
Supplies for the trays of lasagna prepped and made by Michelle Brenner that she donates to people in her community of Gig Harbor, Wash., are pictured in an undated handout photo.

"My grandmother loved to be in the kitchen and her love for food -- just like myself -- I've been in the kitchens for 90 days straight almost and I never felt out of place or tired, like at work, so there's a love and passion there. And she had that," Brenner said.

The president of the Gig Harbor Sportsmans Club offered to let Brenner use their commercial kitchen, to continue her journey and fulfill orders faster, in a safe environment, where people could pick them up while still staying socially distant.

"It's a lot easier having the bigger space where I can actually bake more -- I've done an average of 15 to 25 lasagnas a day," Brenner said of the dish that takes about "four hours to get everything up and going."

"Some days I might be a little slower than others," she said of her one-woman culinary operation, "but I'm like a machine now." 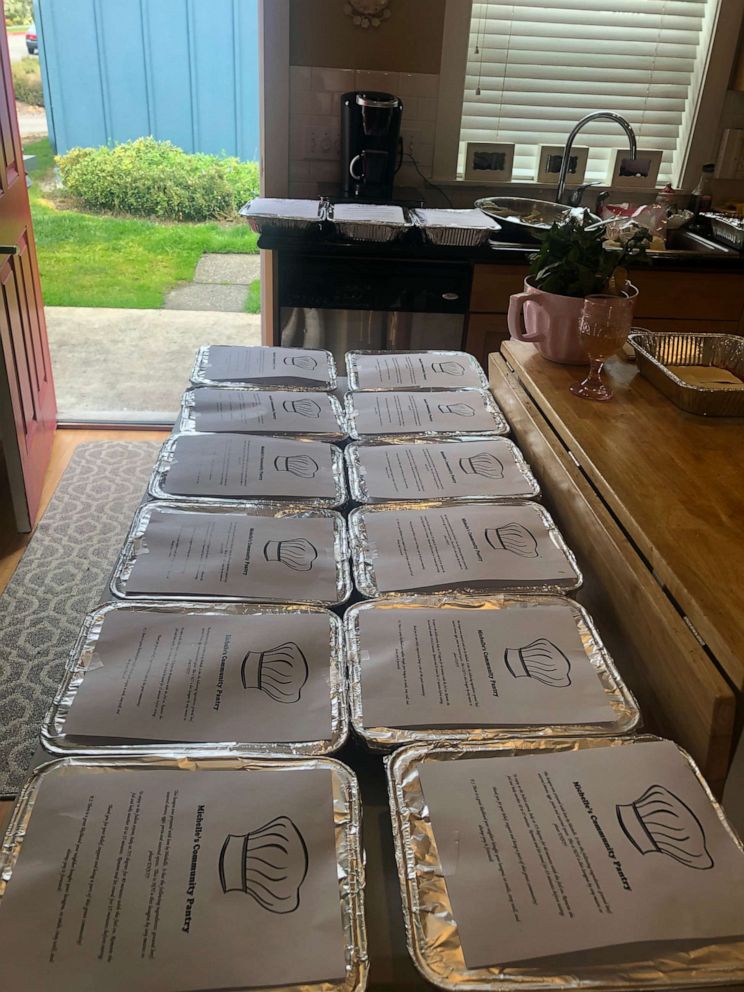 "Then I get ready for the next day, check my phone for orders and plan those out," she said. "When I sit back and say I just made almost 1,300 lasagnas in nearly nine weeks, that's just crazy -- but it's awesome too."

Her first fundraiser netted $5,000 in donations that went towards making trays of the layered pasta. "Then I set a goal of 1,000 lasagnas so we did another fundraiser, then we hit the thousand [mark] and that fundraiser ended. And low and behold the request for more lasagna is still there," she said, adding that she's currently on her third round of fundraising to keep fulfilling orders to feed everyone from front-line workers to local families in need.

"The connection here is community and people connecting with each other. There's such a bigger message than lasagna," she explained. "I was just the one that was lucky enough to make the lasagna and honored enough to be a part of that. People say, 'Oh she's a hero.' No, I'm not. It's all the people that continue to believe in this movement -- that together we're all gonna support each other one way or another."

Brenner even said that frozen lasagna maker Stouffer's "contacted me directly and thanked me for what I was doing and are supporting me 100% behind this journey -- because they believe that what I've done is such a great thing."

She has provided large orders in a single day with "as many as 50 lasagnas to go to hospitals or schools," which Brenner said has given her a chance to "see all walks of life" from tired front-line workers, people who have lost loved ones to COVID-19 and food-poor families on holidays.

MORE: The best BBQ guide for 4th of July with tools, tips and recipes

"That's why this is donation-based, we want everybody to have lasagna if they want lasagna," she said. "Unfortunately in my case, I've seen more of the sad stories -- but I see people wanting to support people in those times of need."

Brenner said that this process has shown her the power of community and given her a renewed sense of purpose.

"I'm very shocked and I'm still absorbing all of this," she said of the international attention for her philanthropic efforts. "I'm 100% honored to be a part of this and now it has taken on a life of its own -- I am just so humbled and I've inspired myself more through this."

She's also seen an incredible show of support across state lines. When she posted that her local store was sold out of basic ingredients like ricotta cheese, due to the pandemic, a friend reached out and offered to pick up what was missing from Oregon and drive it down.

"You know by giving somebody this lasagna that they're gonna sit down with their family and they're gonna have a meal. And you are providing that time, that gift of memories -- it's kind of priceless," Brenner said. "The lasagna is a bonus. The gift is the community choosing to support one another."

Brenner said the biggest takeaway is growth in movement.

"It doesn't take 10 people to make a difference, it doesn't take 100 people, it really starts within you -- just one person is capable of doing something that is so meaningful," she said. "I will take the thank yous, the hugs and tears that I've seen and I will cherish that because I was able to see the gift that I was given and I was able to utilize that to the best way that I could."

This morning, Brenner joined “Good Morning America” to spread the word of her lasagna, but she was in for a surprise herself. When one company heard of Brenner’s selflessness, they decided they wanted to help out.

“So many people have been inspired by what you did, giving up your stimulus check to begin all of this, and the Zespri kiwi company learned about the amazing work you’re doing and want to help you as well. So they’re giving you a check of $10,000,” announced George Stephanopoulos on “Good Morning America.”

Meet Michelle Brenner aka the "Lasagna Lady" who lost her job and began making lasagna amid the pandemic, baking nearly 1,300 lasagnas to help feed health care workers and those in need. https://t.co/S5c6AjbVUh pic.twitter.com/F3UH4BMfWf

Along with $10,000, Zespri said it will donate 23,000 kiwi fruits to the Emergency Food Network on behalf of Brenner “to help spread [her] sweetness in the community as well.”

“Oh my God! You’re going to make me cry. Thank you,” said Brenner, in shock. “You know, I am a lady of a thousand words and I think right now you’ve taken that from me.”

“I am truly touched. I am truly honored to be a part of this, what I’m going to call now ‘The Lasagna Legacy’ and food movement. Thank you very much,” she added.