Halloween is creeping up fast!

Be the ghostess with the mostest this year with some of the top trending Pinterest Halloween recipes.

These eight creative and delicious recipes below are perfect for your own Halloween dinner party! 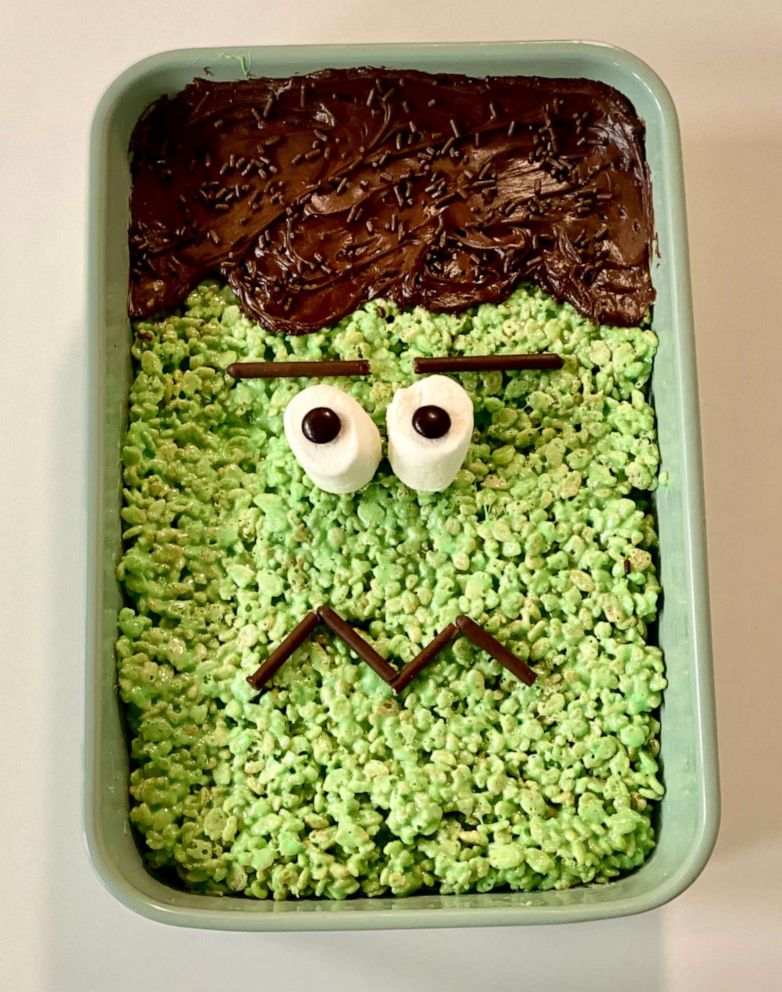 This is a great no-bake recipe that takes less than 10 minutes to make! As for decorating the Frankenstein, I used Pocky Sticks for the eyebrows and also the mouth instead of using melted chocolate or black frosting. I also used chocolate frosting for the hair instead of melting chocolate which I always make a mess of and/or burn! It was much faster and cleaner. You'll want to "bolt" down this yummy recipe. I highly recommend this one!

Recipe reprinted courtesy of Your Cup of Cake. 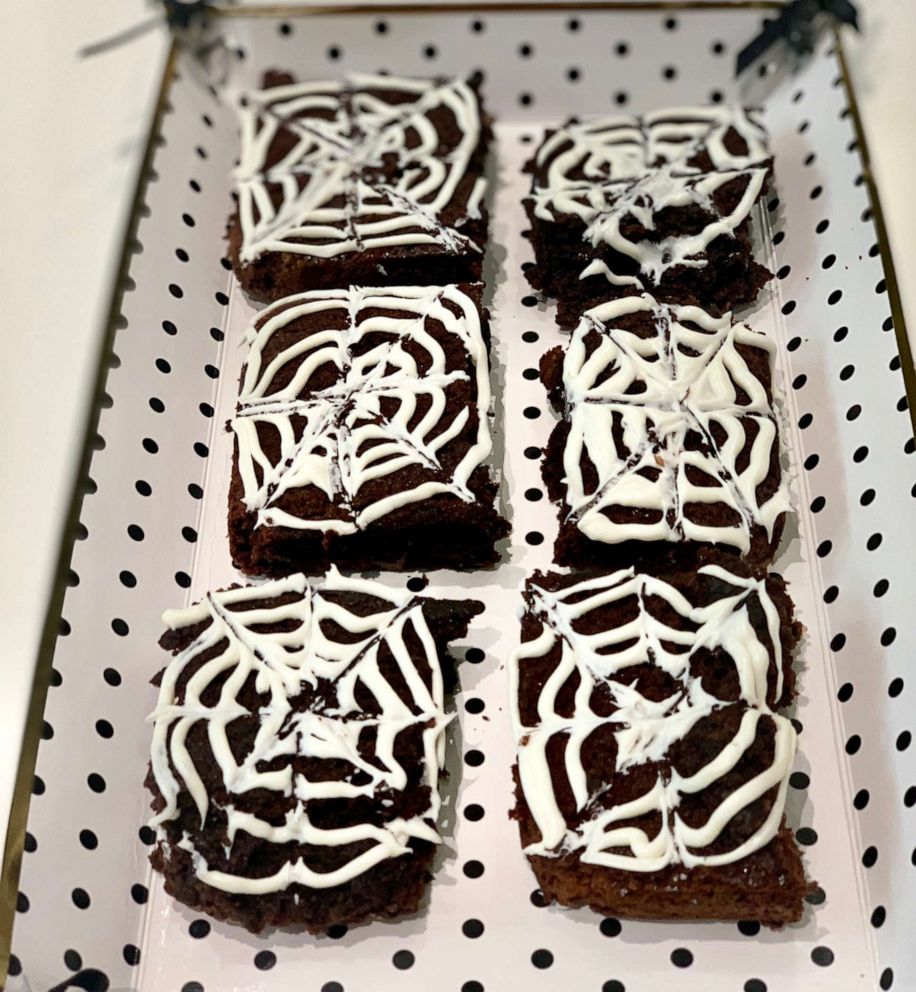 I loved the simplicity and decadence of this recipe. I used Betty Crocker Dark Chocolate Brownie Mix to make the brownies and it was as easy as ever. The brownies were a bit flaky on the top so in order to decorate them with icing I turned them over and used the bottom side to decorate instead. Because I was using the cakey bottom side, the frosting didn't glide as smoothly as it might have otherwise when making the lines for the spiderwebs so that's the only downside.

The brownies were so rich and delicious and the added frosting gave it a nice touch. I used Pillsbury Vanilla Creamy Supreme Frosting for my version. This is a very kid-friendly recipe and is also incredibly easy. I'd highly suggest making this for any Halloween occasion as you can whip it up in less than an hour! No tricks in this recipe - just the treat! 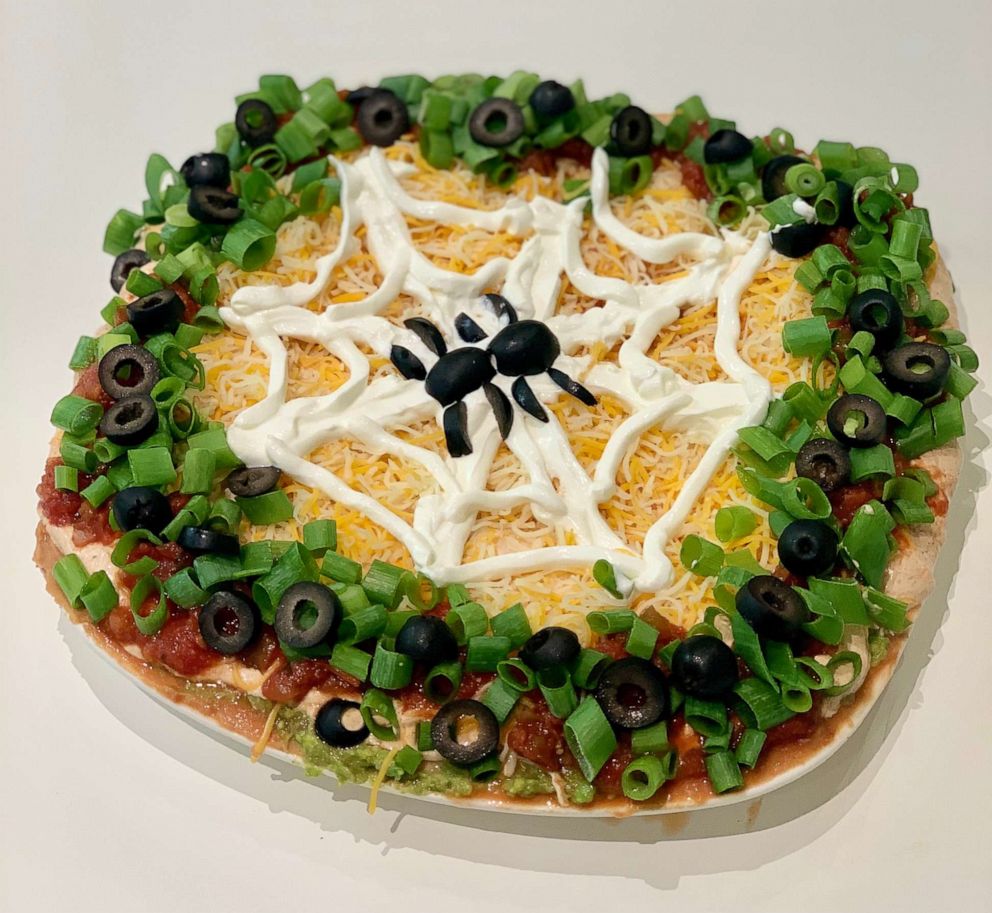 Now taco-bout a Pinterest winner! I love me some taco dip at any get together and having another no-bake recipe in the mix just feels like an extra win. This pin didn't come with a recipe so I actually just made this one up myself based on the photo and standard taco dip recipes. I used a layer of refried beans, guacamole, sour cream, cheese and topped with salsa, green onions and olives.

I feel like you can't go wrong with taco dip and it was definitely tasty. I didn't have a plastic spider on hand so I improvised by making a spider out of olives which I actually preferred since it was edible! Making this dish was a breeze and is the type of food that you could prepare the day or night before without worrying. Pro-tip: I arranged this on a curved plate but if I had to do it again I would opt for a bowl because it ended up getting messy and spilling over the edges. 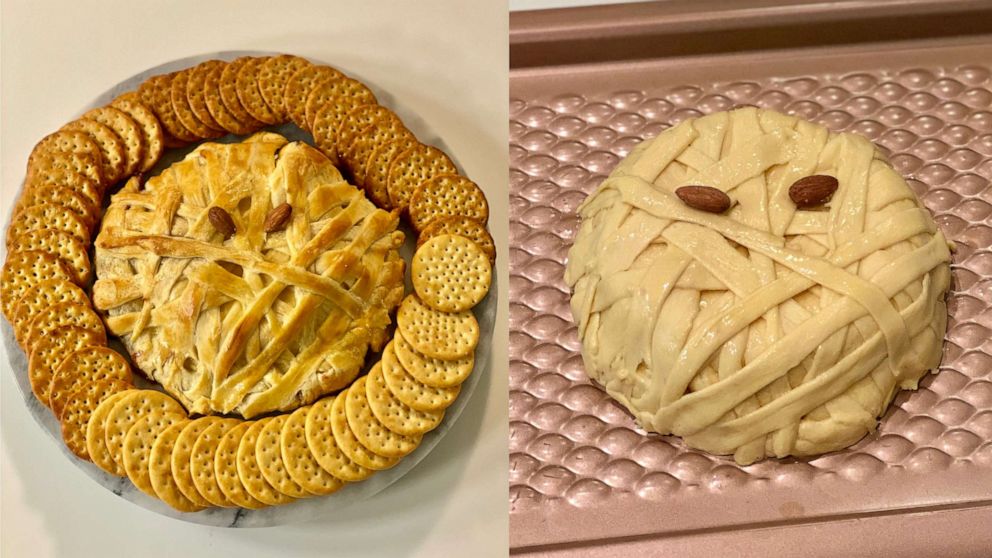 This recipe was incredibly easy and tasty. I highly suggest trying this as an appetizer or snack. This is more of an adult-friendly food than kid-friendly.

I couldn't find phyllo dough sheets at the grocery store, so instead I bought two canisters of Pillsbury's Crescent Roll Dough. This seemed to work very similarly, you just have to work around the perforated edges when shaping the mummy. The recipe was pretty easy to make overall. You just wrap your brie and jam in dough and then wrap it in strips to look like a mummy. Truthfully it was one of the easiest recipes I made this year!

If I were to remake this recipe, I would likely use less dough to wrap the mummy initially before covering it in strips. I feel my brie was too doughy and it took a bit of maneuvering to get to the actual cheese. The dough, brie and raspberry jam combo is rather delicious.

Recipe reprinted courtesy of Stacey Garska Rodriguez at In The Kids Kitchen. 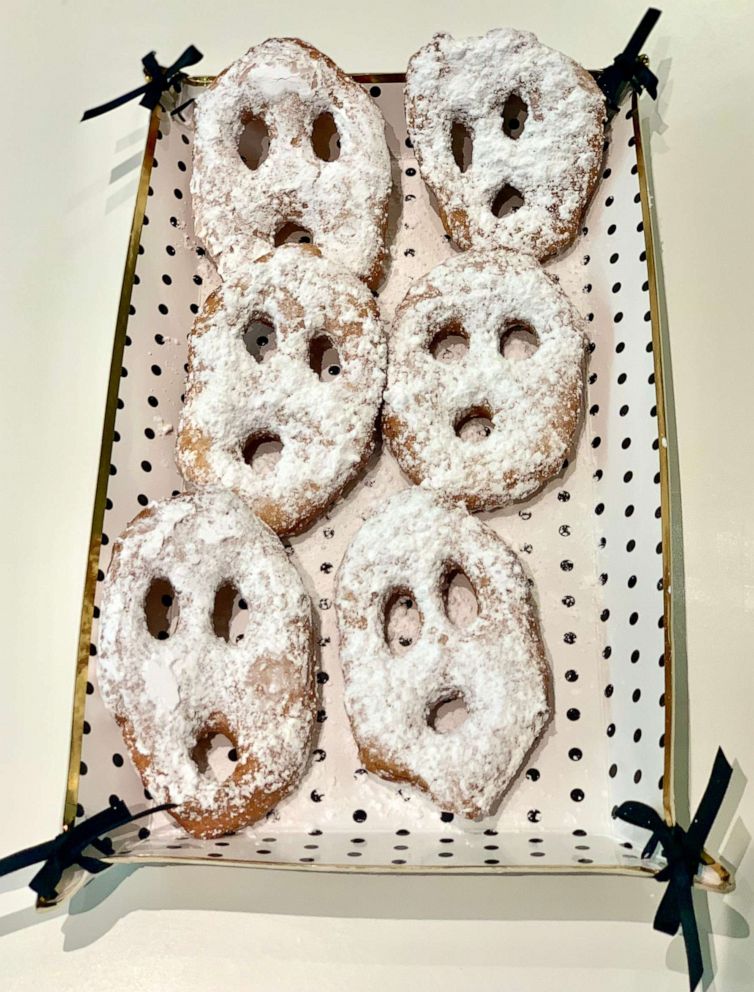 The making of this recipe was one of the most kid-friendly of the bunch. I used Pillsbury Grands! Homestyle Buttermilk Biscuits dough to make these and they turned out delicious. All you have to do is separate the biscuits, roll it out with a rolling pin, punch holes for the eyes and mouth and then roll them out a little more. I used a really tiny cooker cutter to make the cutouts, but the creator of the recipe used the back of the cap of food dye to punch the holes.

The only non-kid-friendly part is actually frying them in a vat of hot oil. I set my oil a little too high so while the donuts looked done, some were a little too doughy on the inside. This the kind of Halloween treat that's best if you eat it immediately so I suggest frying them up right before you plan to eat them. 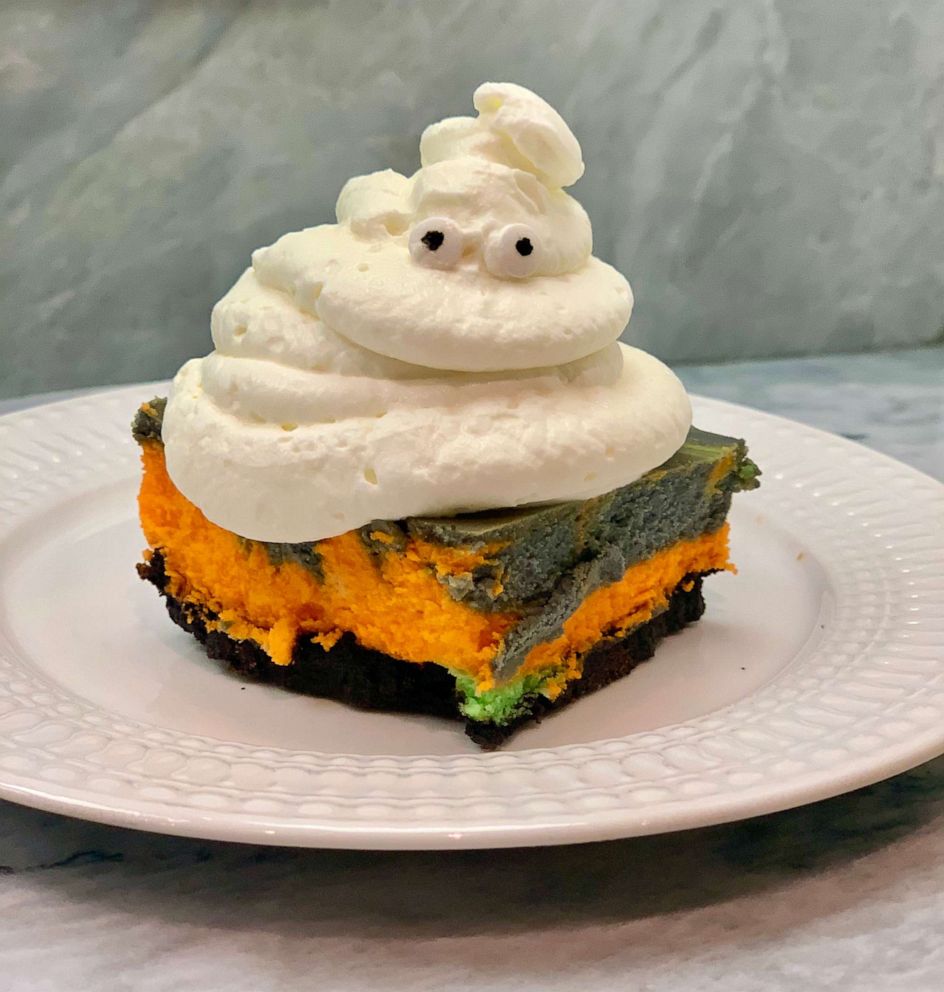 This recipe was so creamy and delicious. Often when I make cheesecake it breaks during the cooling process, but this one didn't. I don't have a food processor so I used my Ninja blender to crush the Oreos instead for the crust and while it was a little more time consuming than a food processor would have been it worked just fine!

For the cheesecake batter, I used gel food dye as the recipe calls for to tint the batter. I didn't have any more red food dye to mix with blue to make purple since I used it all in the Zombie Guts Cinnamon Rolls recipe below, so instead I dyed that part of the batter gray. I wished I'd just stuck with a brighter color like yellow because it ended up overpowering the other colors and looking rather ugly. I'd suggest using whatever primary food dye colors you do have. My swirl technique when it came to mixing the batter on top of the crust could have used some work too.

Cooking the cheesecake was rather easy, it was waiting for it to chill in the refrigerator for four hours that was hard! I was also too impatient to chill the mixing bowl before making the homemade whipped cream, so it ended up taking longer than I'd like to thicken. The end result was unBOOlievably delicious. Truly one of the best cheesecake recipes I've ever made. If you plan on remaking this recipe, I'd suggest using frosting instead of homemade whipped cream on top. I imagine the whipped cream would melt if left out for too long. I'd also suggest freezing the plate that you are going to use for plating, so the cheesecake stays fresh as long as possible.

Recipe reprinted courtesy of Jocelyn Brubaker at Inside BruCrew Life. 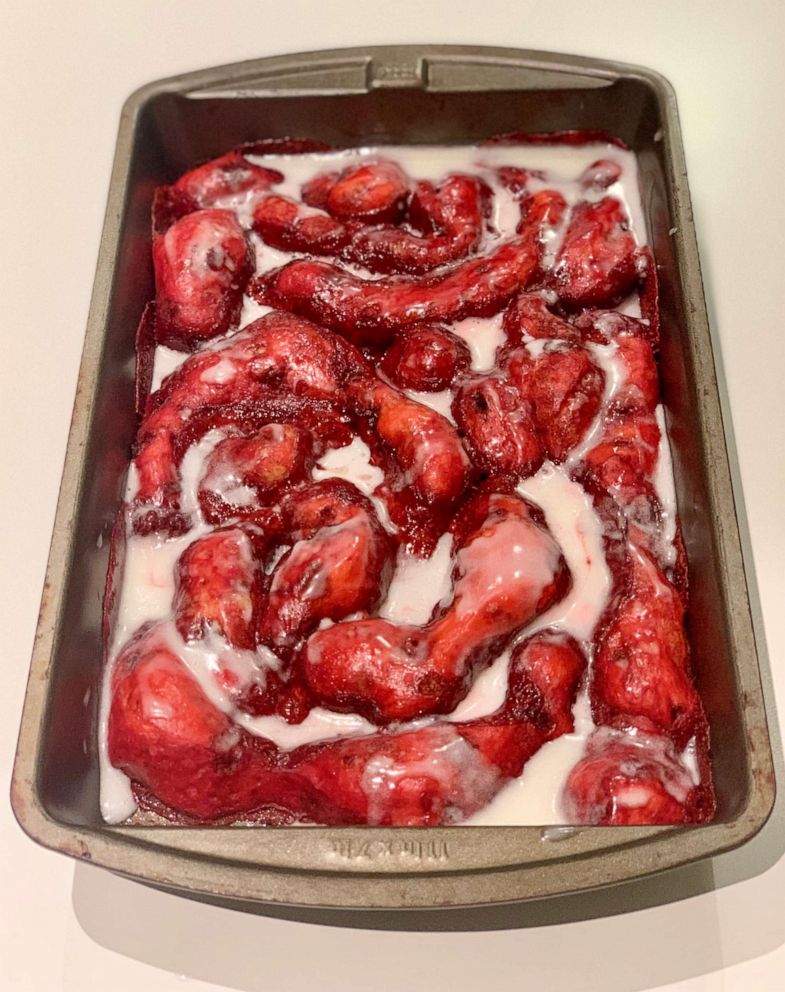 Now this is one fleshtastic recipe that is sure to be a talker! Instead of following this recipe line for line, which I usually do, I took inspiration from it in order to make a modified Zombie Guts Cinnamon Rolls recipe. I wanted to see if this recipe could be recreated with refrigerated Pillsbury Cinnamon Rolls dough, half and half, and red food dye.

I personally make cinnamon rolls from scratch much too regularly to admit, but I know that using yeast and waiting for time for rolls to rise is enough to make any novice baker -- or busy parent -- shy away from making a recipe. What I did instead was pop the uncooked and peeled apart cinnamon buns in a cup of half and half that I dyed very liberally with red food gel. Whenever I make homemade cinnamon buns I always pour some heavy cream or half and half right on top of the buns before I put them in the oven because it helps to keep them moist so that's where I got the idea from. I let the buns sit in the cream overnight but I don't think you need to wait that long for the dye to take. Then I arranged them in a baking pan to look like guts, tossed the extra red cream, and baked them. You be the judge if the end result looks enough like guts but to me it's definitely passable! Overall this was a much easier alternative with a similar result!

Recipe reprinted courtesy of Leigh Anne Wilkes at Your Home Based Mom. 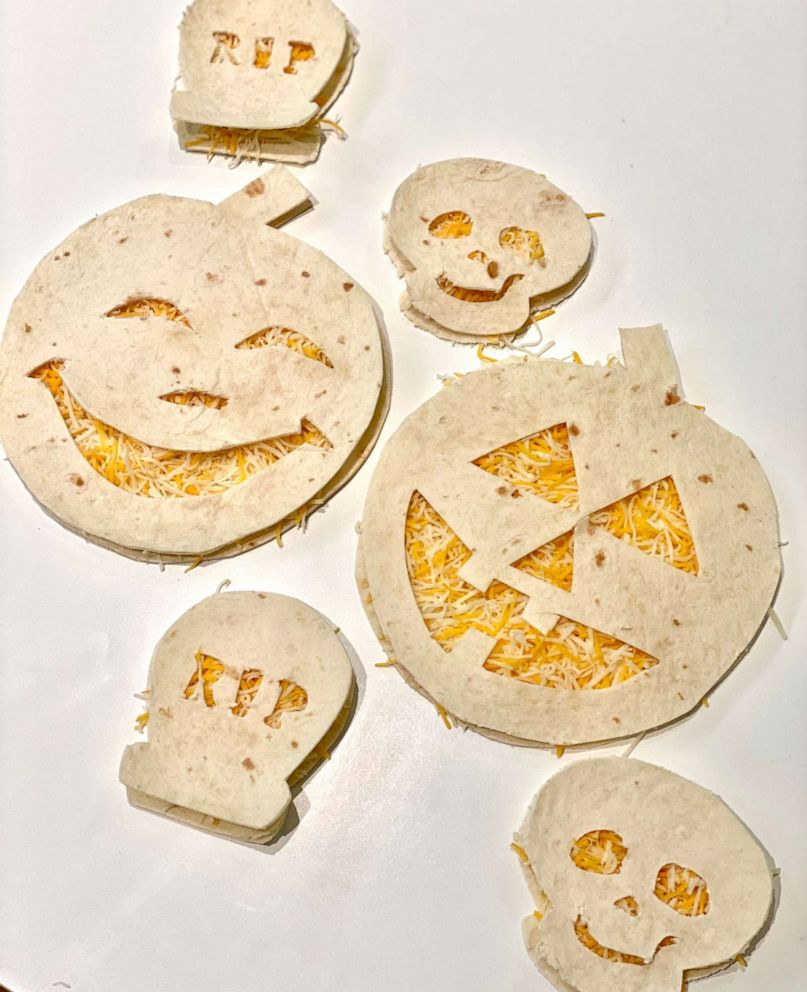 This two-ingredient recipe was the easiest of the bunch. All you have to do is cut tortillas in the shape of pumpkins and top with cheese! I took some liberties from this recipe and used cookie cutters to make gravestone and skull-shaped quesadillas in addition to the jack-o-lantern ones. I started out using a food marker to draw the lines and then a sharp knife to make the cuts but I find free handing it is easier and faster and leaves room for creativity. This Jack-o-lantern Cheese Quesadilla recipe would go rather well with the Spiderweb Taco Dip. I usually pan fry my quesadillas so making them in the oven was a change for me. It was so much easier than pan frying that I think I'm going to always make my quesadillas this way going forward. This is definitely a fun one.