By Kelly McCarthy
Video by Faith Bernstein, Asher May-Corsini
Share —
Sign up for our newsletters to get GMA delivered to your inbox every morning!

Amid a growing sea of creative, well-qualified applicants, 27-year-old Karly Pavlinac Blackburn stood out from the competition with a resume sheet cake that she had hand-delivered last fall to Nike headquarters via Instacart delivery, which was a catalyst for a number of career conversations.

"I will be the director of growth marketing at a software startup called CureMint -- we make software that helps dental companies automate their business," Pavlinac told "Good Morning America" of her new role, which she starts on Monday. "To be on the other side of the job hunt feels good. It has definitely been a roller coaster with the virality of the LinkedIn post."

Pavlinac said that after posting about her "resume cake" on LinkedIn, her story went viral, opening up "lot of doors to have conversations with people at companies all over the country."

"I got to hear what a day in the life looked like in various roles, meet a lot of amazing people, and really take some time to figure out me," she said. 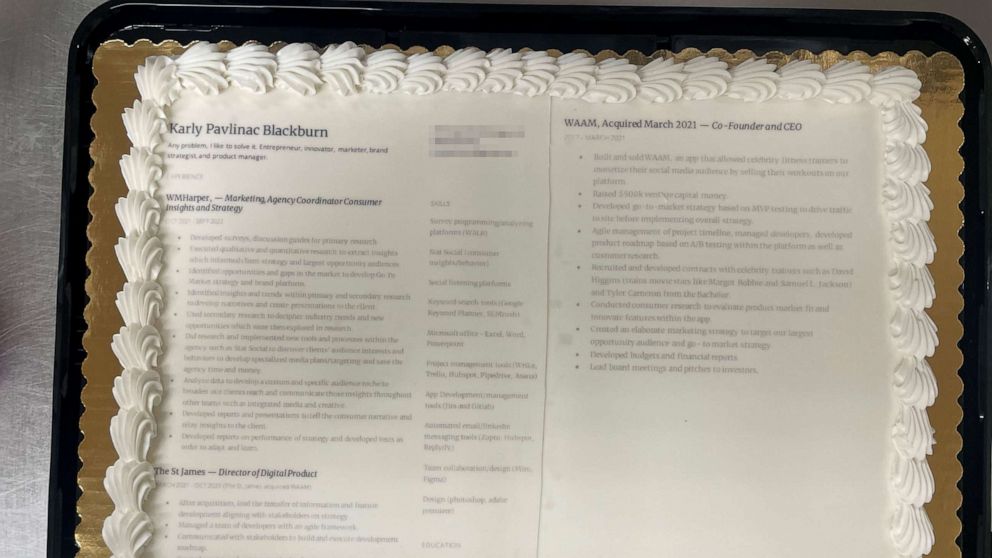 Pavlinac, who previously founded and sold a celebrity fitness monetization app, explained that with so much time spent at work, she prioritized "picking something I have a passion for."

"The main thing I wanted to do in a new role is continue to learn and be challenged while working with kind, smart, talented people. I didn't want to give up on that dream," she said. "I knew when I met the founder of CureMint, Brandon McCarty, and the head of sales, Travis Hodges, it was the right fit for me."

Pavlinac also shared with "GMA" her top two tips with for other job-seekers. "Don't be afraid to do something out of the box and never give up on what you really want. Because it will happen, you just have to keep going," she said.

Jump-start your career: 7 resume tips to help you land that dream job

Pavlinac also gained an unexpected friendship-turned mentorship with the Instacart delivery woman who was integral to her initial plan.

Speaking with "GMA" last fall, just after her LinkedIn post went viral, Pavlinac recalled, "I was actually talking to my former colleague about getting in front of employers -- and he was like, 'Well, Karly you need to do better ... show up in a creative way ... what about a resume on a cake?'"

Although Pavlinac knew there were no open positions with Nike's new business incubator Valiant Labs -- which was then on her shortlist of dream jobs -- she took up her colleague's suggestion in the hopes that it might help her find some favor within their team.

"I was like, I'm actually going to do that," she said, noting that she hoped the cake would ensure she was "on their mind if roles did come up in the future."

As for the execution, Pavlinac admitted "it was kind of difficult" because she lives in Wilmington, North Carolina, and Nike World Headquarters are based in Beaverton, Oregon -- meaning she couldn't just swing by a bakery, pick up a specialty order and deliver it to them herself.

"I'm on the other side of the country trying to get a cake delivered to Nike, [which is] in Oregon," she said last fall.

Instead, Pavlinac searched online and found an Albertson's store 4.4 miles from Nike World Headquarters that offered screenprint-frosted photos on sheet cakes with delivery options through Instacart.

"The only difficult thing is when an Instacart delivery is made, you don't know who's gonna deliver it," she said. "The cake has to be made ahead of time, so I had to call Albertsons and I was like, 'Hey, there's gonna be a delivery on this day, I know, you don't know about it yet, but I'm gonna have to have this cake ready. You're gonna need the image, and it's gonna have to be ready before they get there [to pick it up].'" 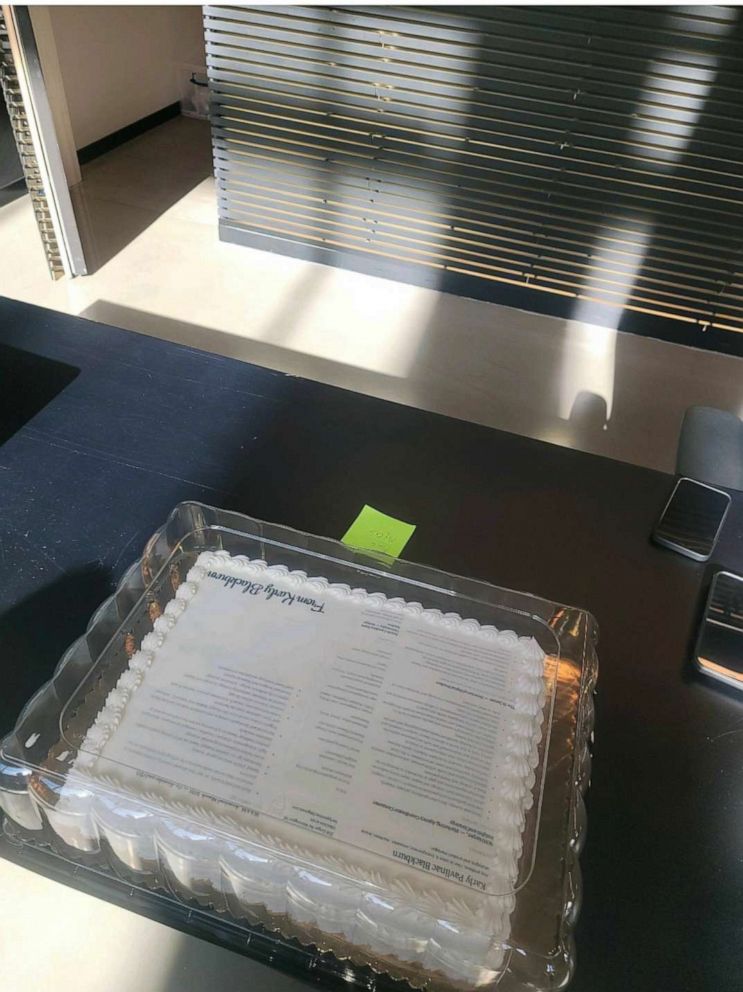 On Sept. 8, an hour ahead of the delivery window at 8 a.m. local time, Pavlinac said she called the Albertsons store to confirm the order -- a half-sheet vanilla cake with her resume printed on top -- would be completed.

Everything was on schedule. All Pavlinac needed was to ensure the cake would make it to its location.

"Lucky for me Denise was the person from Instacart that day to pick up the cake, because she's just so amazing," Pavlinac told "GMA" previously, referring to highly ranked platinum Instacart courier Denise Baldwin.

Baldwin had her own to-do list once she arrived at the store to pick up the cake delivery.

"[Pavlinac] wanted me to take a look at it and make sure it looked OK," Baldwin told "GMA" of the initial instructions that came with the Instacart order. "Me and the baker were both talking about it, because we couldn't believe that somebody had gone out of the box and did a resume on a cake ... I messaged Karly and said, 'It looks great. I'm on my way to the campus, and I'll let you know how things go.' "

The two stayed in constant communication after Baldwin left the store and navigated the massive Nike campus in search of Mac Myers from Business Operations at Nike Valiant Labs.

"She gets there and someone from security was like, 'OK leave the cake here.' And [Denise] said, 'No, I have to give it to Mac, I have to see it go in his hands,' " Pavlinac recalled. "At the time I didn't know this, but she had her 8-month-old son on one hip the whole time -- she didn't even tell me, she was just like, 'I'm gonna get it done.' " 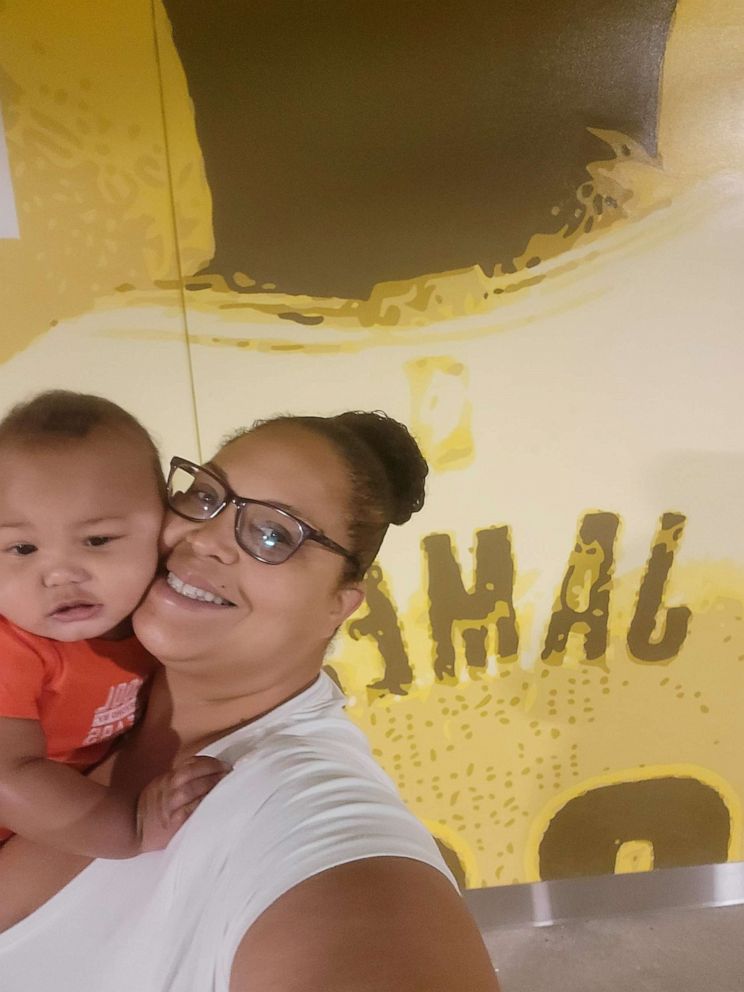 The working mom -- who at the time was expecting another child -- told Pavlinac, "'Don't worry, I'm here on the campus. I'll do whatever it takes.'"

Myers eventually came down after a call from security letting him know about the delivery. According to Baldwin, Myers was "kind of blown away" and even asked to take a picture of himself with the cake for confirmation. 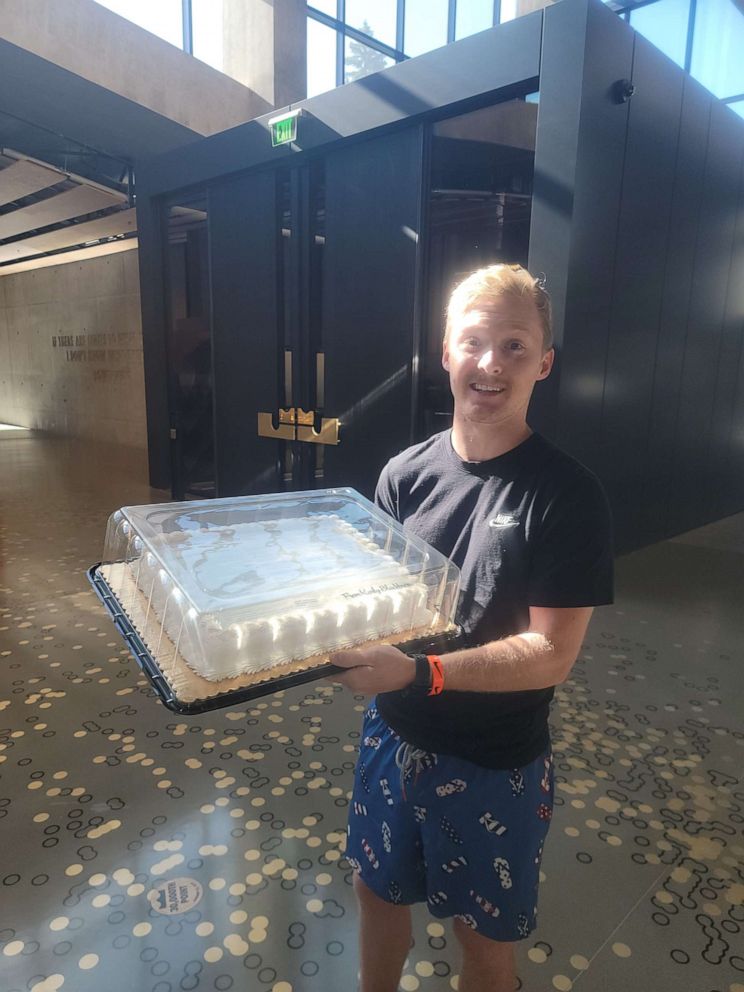 The pair later shared their story in a now-viral LinkedIn post, which has been liked more than 132,000 times and garnered thousands of comments.

Pavlinac was quickly inundated with back-to-back calls from recruiters, potential employers who saw her post. She said she also took time to check in with her new mentee, Baldwin, who is looking for her dream job as well.

"The cool thing afterwards was, [Denise] texted me, 'You've inspired me to go chase after something better,' " Pavlinac said. "I told her whatever I can do to help find a job ... be it sharing documents on 'how to do a job should search' or talk[ing] about what jobs might fit."

Baldwin, a self-described "go-getter," told "GMA" last October that she was looking for a position in an assistant or human resources role that capitalizes on her communications and multitasking skills.

"I'm just trying to get my foot in the door where I can have good benefits for my kids and have some security and stability," she said at the time.

Perhaps more important is the newfound friendship the two women have developed as a result of their cake delivery scheme -- and what that friendship has taught them both.

"Denise inspires me to be a better person," Pavlinac said.

An earlier version of this story was first published Oct. 4, 2022.