Whether you're a novice in the kitchen or just looking to spend less time laboring than years past, it's a perfect opportunity to take a semi-homemade approach to your dishes.

With these tips and tricks from Bon Appétit test kitchen director and super taster extraordinaire, Chris Morocco, take the fuss out of the feast by dressing up prepared ingredients and packaged mixes to enjoy Thanksgiving to the fullest.

"I think you can get totally crafty when it comes to all kinds of store-bought stuff," he told "Good Morning America." "I have extremely limited amounts of time in the kitchen, so I have to use meaningful shortcuts all the time in order kind of make my own celebrations and feasts happen. I hope people don't labor under the assumption that chefs aren't necessarily doing everything from scratch."

So yes, it's entirely possible to save time without sacrificing flavor and to echo the famous phrase of Ina Garten, sometimes store-bought really is fine.

Balance out boxed stuffing mix with other flavors

"I grew up eating my aunt and uncle's stuffing and loving it and not knowing that they were using Pepperidge Farm stuffing mix," Morocco told "Good Morning America." "Of all the things that can end up just taking you a weird amount of time and tons of room in your oven -- laboring to build on enough flavor from them that you pretty much get right out of the gate with a packaged stuffing mix is wild."

Morocco said that "for the first time possibly ever" in Bon Appétit, "we published a recipe in our November issue that incorporates some stuffing mix." 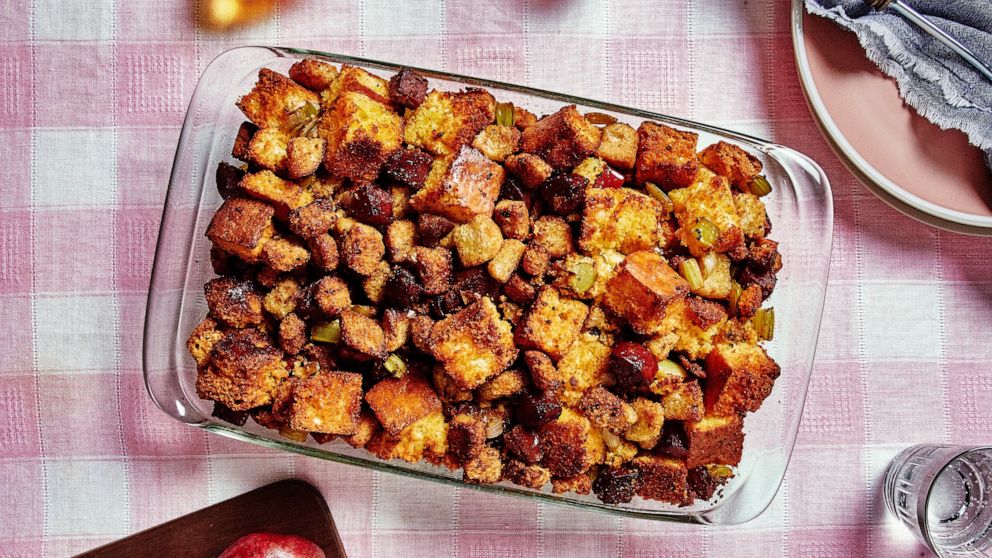 Check out Illyanna Maisonet's recipe for a cornbread and salami dressing, using boxed mixes, that Morocco said delivers "both a nutty, full-on flavor of the cornbread -- and an intense pop of flavor from the stuffing mix."

Because store-bought cornbread can be on the sweet side, Morocco explained that the salty, savory punch from the cured and "gently fried-out salami builds out some balance to the sweeter flavors -- it's pretty fantastic." 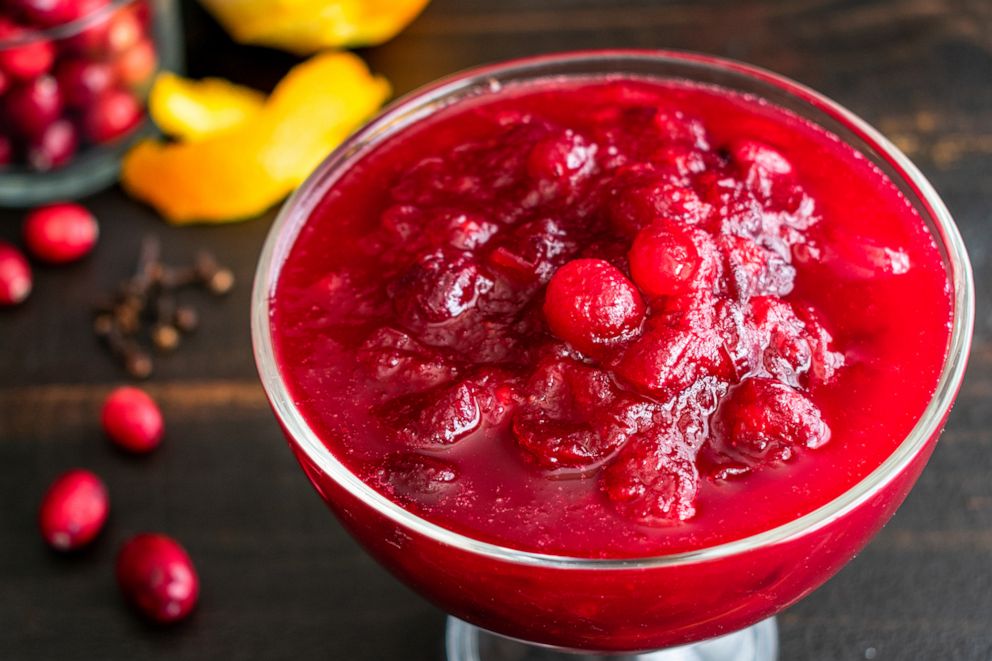 STOCK IMAGE/Candice Bell/Shutterstock
Fresh cranberry sauce made with orange peels and cloves sits in a dishg in an undated stock image.

While some families have a soft spot or a deep nostalgia for jellied cranberries, Morocco said there's no shame in using a store-bought whole berry cranberry sauce.

"I'm sorry, that's like exactly what you yourself would basically be making if you made a basic cranberry sauce," he explained with a laugh.

MORE: How to pick the perfect Thanksgiving wine under $25 according to the experts

Save major time on chopping vegetables

Prepped cubes of butternut squash or even pre-diced carrots, onion and celery for a mirepoix base "represents a pretty massive time savings," Morocco said. 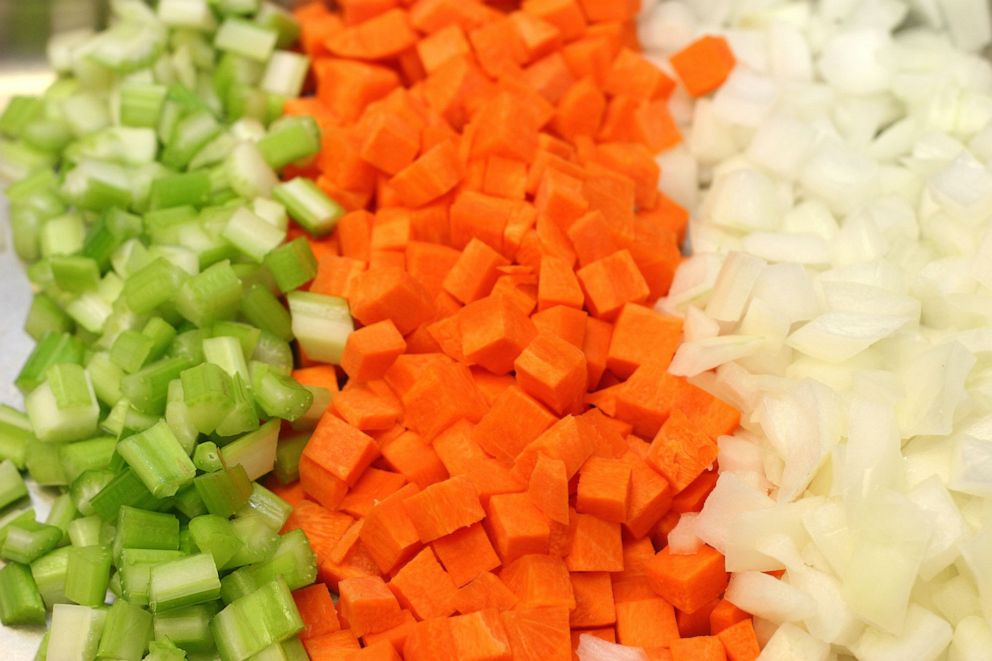 "If you're going to be layering in tons of flavor on top of or around it, I don't think there's any harm in reaching for a pre-chopped vegetable," he added. "If that's the difference between you putting it or not -- just buy the pre-chopped stuff 'cause it's still going to add so much flavor."

Packaged fried onions can provide a framework for making your own interpretation of a classic Thanksgiving side.

"I'm such a huge fan of store-bought crispy onions, like the French's or slightly fancier Lars brand," he said. "That will add tons of texture, as well as kind of really deep flavor." 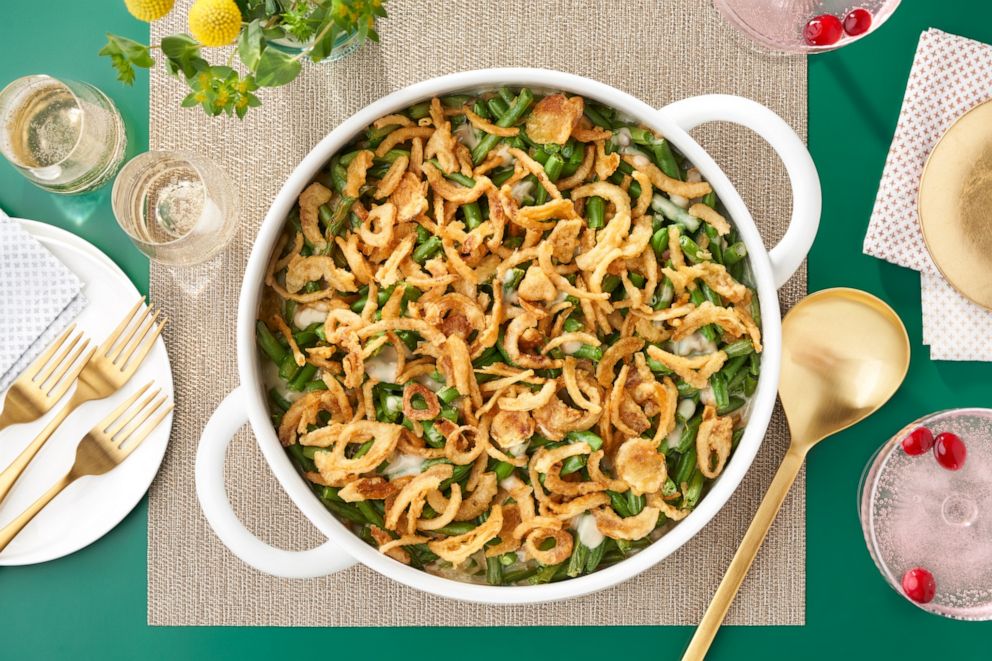 Campbell's
Crispy fried onions on top of a green bean casserole for Thanksgiving.

Rather than making "the standard green bean casserole which everybody's seen a thousand times," Morocco suggested, "wilt a whole bunch of kale or slabs of cauliflower -- with the same exact preparation -- and top it with that crispy onion topping, people are gonna be like, 'what's that?' And it's gonna be delicious, it'll have all the flavor of a gratin, but with very little work involved."

Brighten up any packaged ingredient with fresh ingredients 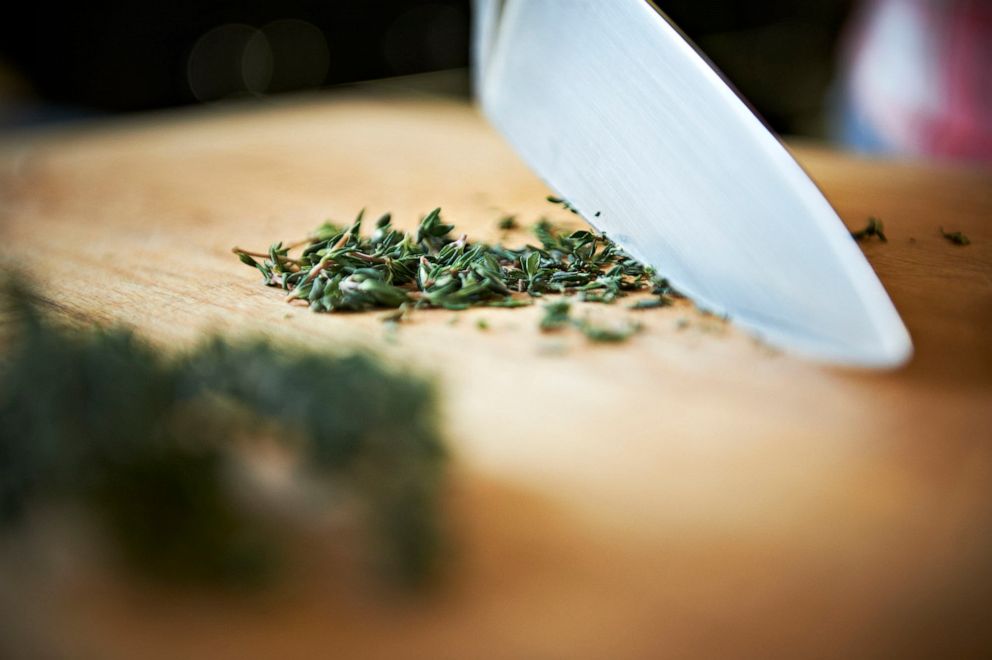 Matthew Leete/Getty Images
The herb tyhme is cut on a board in an undated stock image.

"Putting a shower of fresh herbs -- whether it's cilantro, parsley or a few sprigs of thyme in something -- goes so far into waking up the flavor of something," Morocco said, "whether it's store-bought or something you've made yourself."

MORE: Southern Thanksgiving gravy recipe made easy, plus tips to keep it smooth

Drawing the line at gravy, but make it ahead with store-bought stock to keep prep simple

While many gravy mixes are on the shelves at supermarkets, Morocco said it's the only part of the holiday meal that deserves your full, homemade attention. Especially since it can be made ahead of time, reheated and only gets better with the addition of turkey drippings.

"The one thing I would say, you can literally serve anything for Thanksgiving -- but the thing that defines Thanksgiving for me, is gravy. Other than using store-bought broth -- by all means go ahead and use it -- there's kind of no way around just making your own gravy if you really want something that's going to be special." 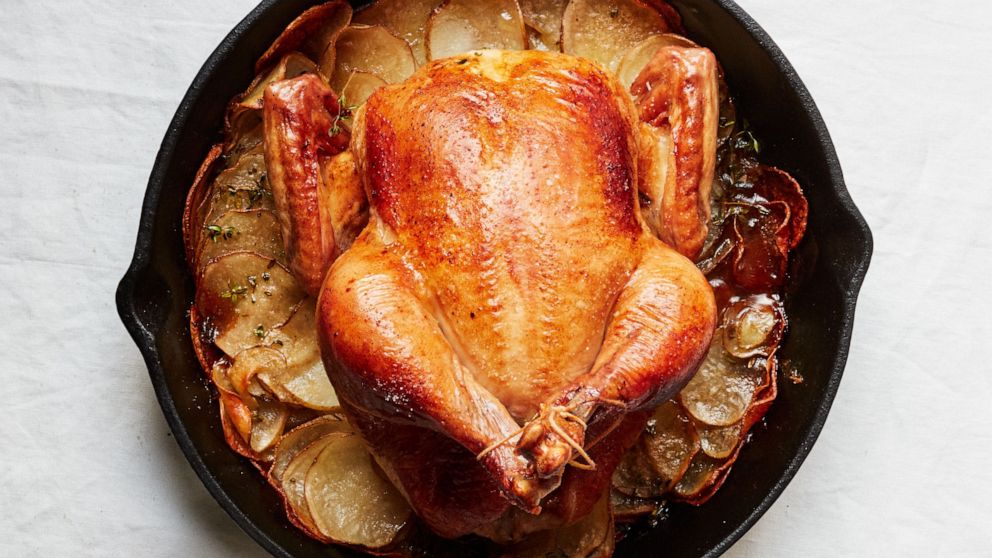 Marcus Nilsson
The drippings from a roasted chicken can be used to jazz up gravy this Thanksgiving.

Plus, Morocco explained that when you "invest the time in making that, it allows you to cut corners in other areas."

"I will cut corners like you can't believe. I will whisk miso into my gravy, soy sauce, Worcestershire sauce into my gravy to build up flavor that might not be there because I wasn't able to make my own chicken or turkey stock this year. I'm finding ways to kind of boost flavors all over the place." 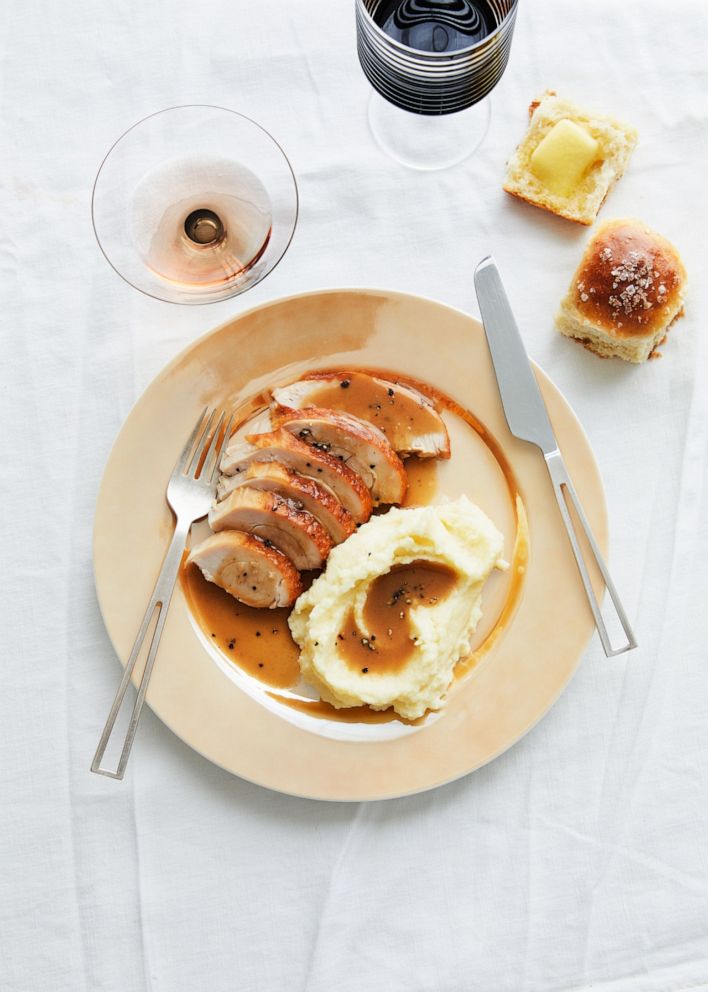 For a gluten-free flourless option, Morocco uses all the pan drippings from his roasted poultry cooked in cast iron, then cooks out some red onion that adds "a jammy sweetness" and he said "it just comes together really quickly and it's very satisfying."

Check out the full recipe for a simple make-ahead gravy here.

"If you want to add the drippings from your turkey later to an already essentially finished gravy, by all means do it. But having the gravy done ahead just will change your life," he said, adding that it's always inevitably the forgotten last-minute thing to get cooked.

Pass on the mashed potatoes and roast some russets instead

"I'm gonna say it, they're kind of a lot of work," Morocco said, adding that he doesn't have a ricer or food mill on hand to create the silky version he would typically hope to have on Thanksgiving. "If I'm gonna make potatoes this year it's not gonna be mashed, it's gonna be some kind of -- English-style roast potato." 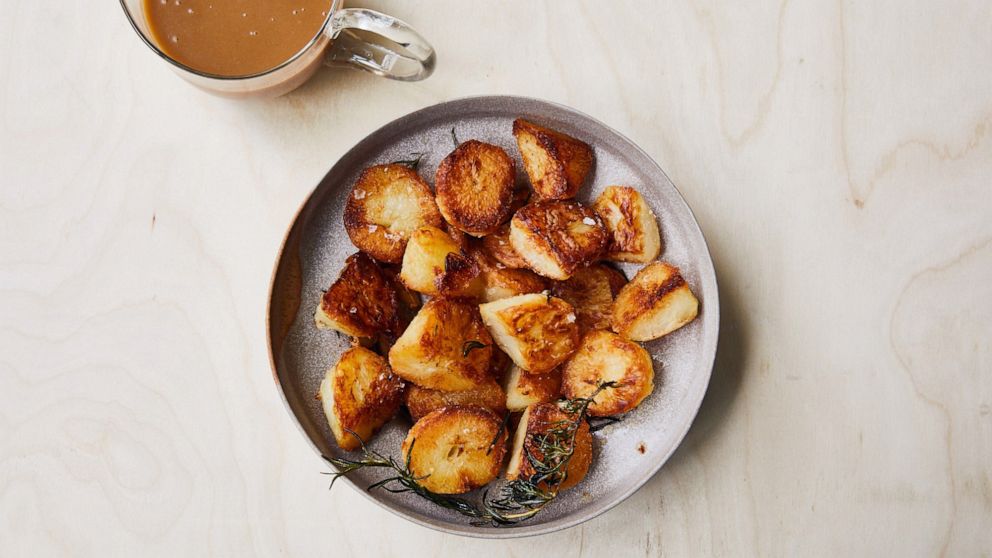 "To me, creamy, rich and unctuous gravy belongs on something crispy and soft," he explained. "If you're not into investing the time in mashed potatoes -- I would just do some simple roasted potatoes or burnished potato nuggets."

Get his full recipe for the parboiled russet potatoes that go into a pre-heated hot pan in the oven and get "impossibly crispy and crunchy on the outside that compliments gravy really nicely."

Los Angeles Times food editor Ben Mims first shared his hot take that throws the traditional turkey day desserts with buttery, flakey handmade pie crusts out the window. Many food writers, bloggers, home cooks and chefs alike, including Morocco, agree that it's just not the year for a fussy dessert.

Instead, opt for an easier apple crisp or a simple cake infused with the warm baking spices of fall could be a winning approach to the sweet finale of your holiday meal. 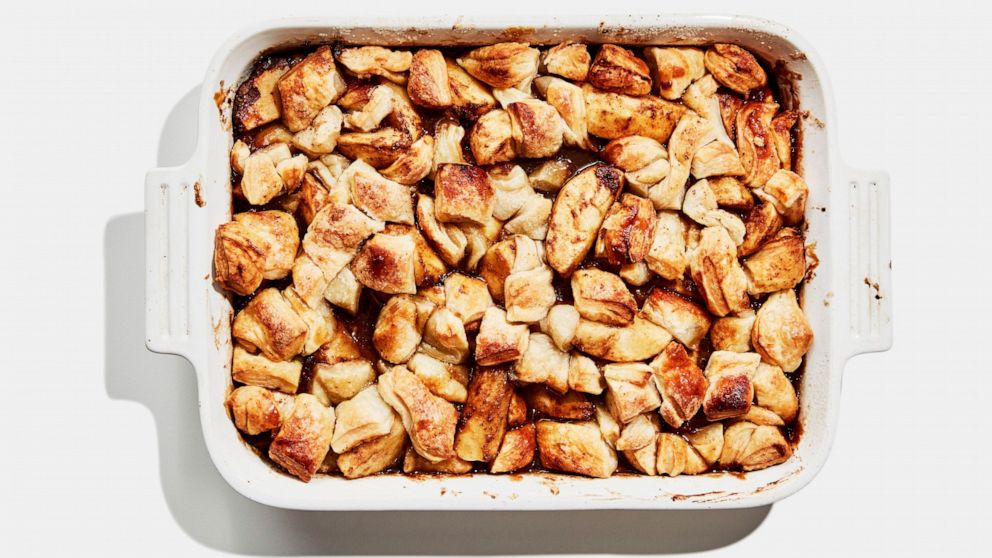 Check out this recipe for an apple pandowdy that utilizes store-bought puff pastry and comes together easier than apple pie.

But if pie is a must on your turkey day table and if you're able to splurge on one completely outsourced item, check out local restaurants or bakeries that have been hard hit during the pandemic and enlist in their professional efforts to enjoy a Thanksgiving pastry. 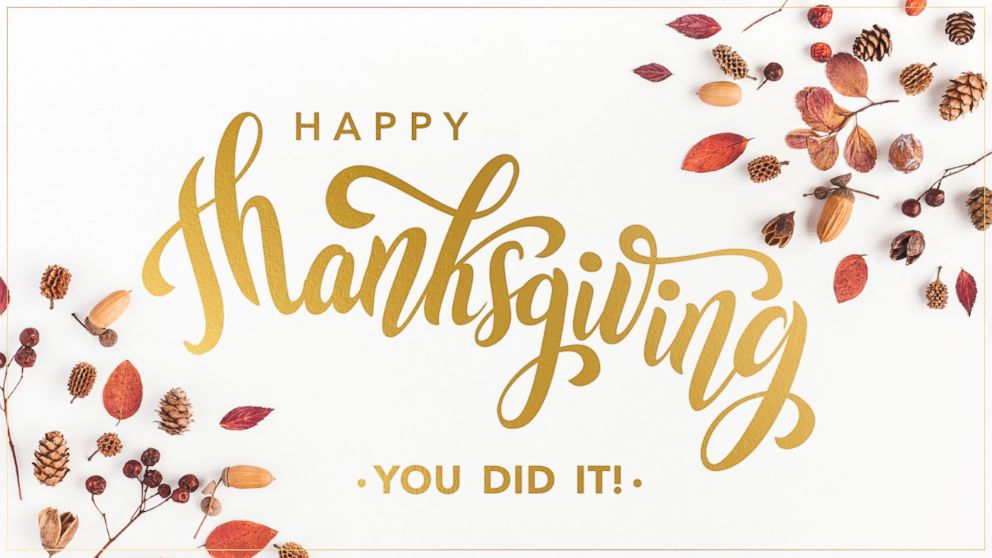 An earlier version of this story was originally published Nov. 2020.