With limited indoor dining capacity and colder weather fast approaching in many parts of the country, restaurants have worked quickly to create comfortable outdoor dining solutions such as plexiglass pods and handcrafted wooden platforms with mini-greenhouses.

But the once seemingly temporary tents and structures have increasingly become permanent fixtures along sidewalks, streets and parking lots, prompting concerns from public health experts that the benefits of eating outdoors -- ventilation, access to outside air, increased airflow -- are becoming diminished. 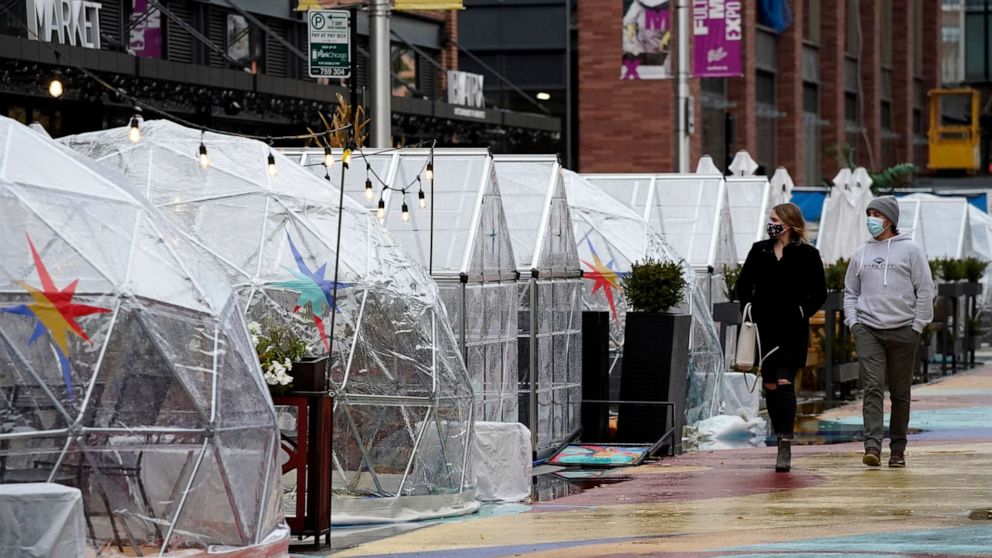 Nam Y. Huh/AP
FILE - In this Oct. 18, 2020 file photo, people walk by outdoor plastic dining bubbles on Fulton Market in Chicago. Illinois set another single-day record for coronavirus infections Tuesday, Nov. 10, 2020, pushing the total number of people who have tested positive for the virus in the state since the pandemic began past 500,000.

"Outdoors means no walls, no ceiling," Anne Rimoin, an epidemiologist and professor at University of California, Los Angeles' Fielding School of Public Health, told ABC News. "When I see these tents consists of walls, [they] don’t have the ventilation the way an indoor restaurant would."

When a person breathes or talks, they release microscopic droplets from their mouth and nose that can travel with the airflow, which is why proper ventilation is key.

According to experts, outdoor air dilutes any potential virus that may be floating in the air. 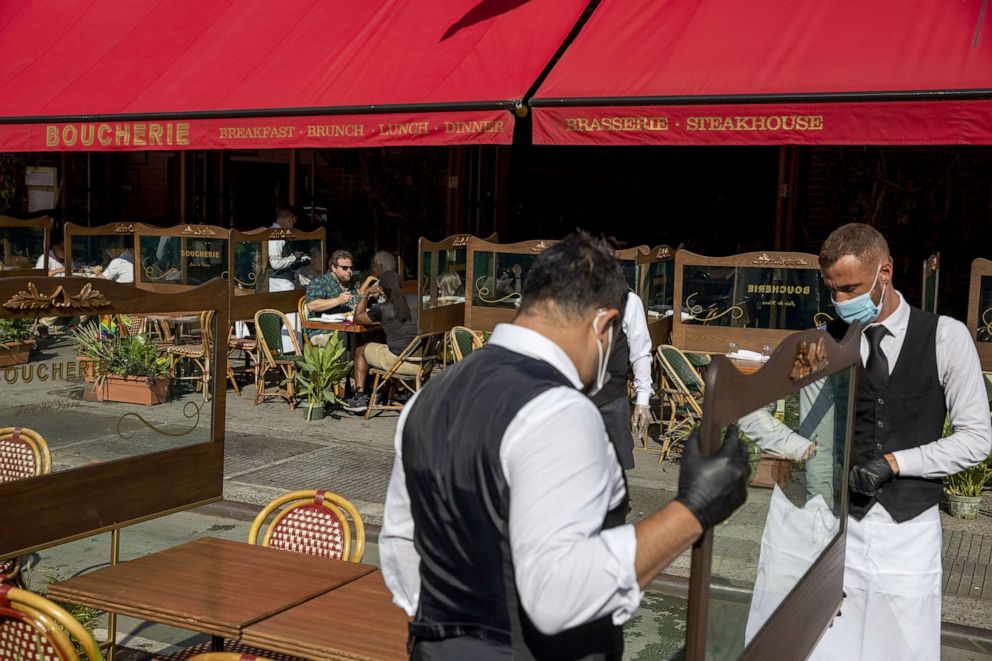 Lucas Jackson/Reuters
Waiters at a restaurant adjust social distancing screens outside for outdoor seating seating that follows current health guidelines to slow the spread of Coronavirus (COVID-19) at a restaurant in New York, June 25, 2020.
MORE: 'Aerosol' vs. 'airborne' vs. 'droplets' amid COVID-19: What you need to know

"Imagine that somebody is infected and sitting at a table. When they’re breathing and talking, they’re releasing viruses into the air that behave like cigarette smoke," Linsey Marr, a civil and environmental engineering professor at Virginia Tech, told ABC News. "If there’s poor ventilation, that smoke or those viruses can build up in the air, leaving other people breathing them, too."

"GMA" Investigates collaborated with Linsey Marr, professor civil and environmental engineering at Virginia Tech, to create new 3-D animations to show how the virus can spread from table to table under a tented structure.

A tented structure with no walls still allows for air to easily flow in any direction through and under the tent, according to Marr. “Once you start adding walls, you potentially block that wind. Once you add four walls, you’re getting close to being indoors and you lose that benefit of being outdoors.”

The dining igloos and domes have some benefit, said Marr, because they isolate you from other diners. 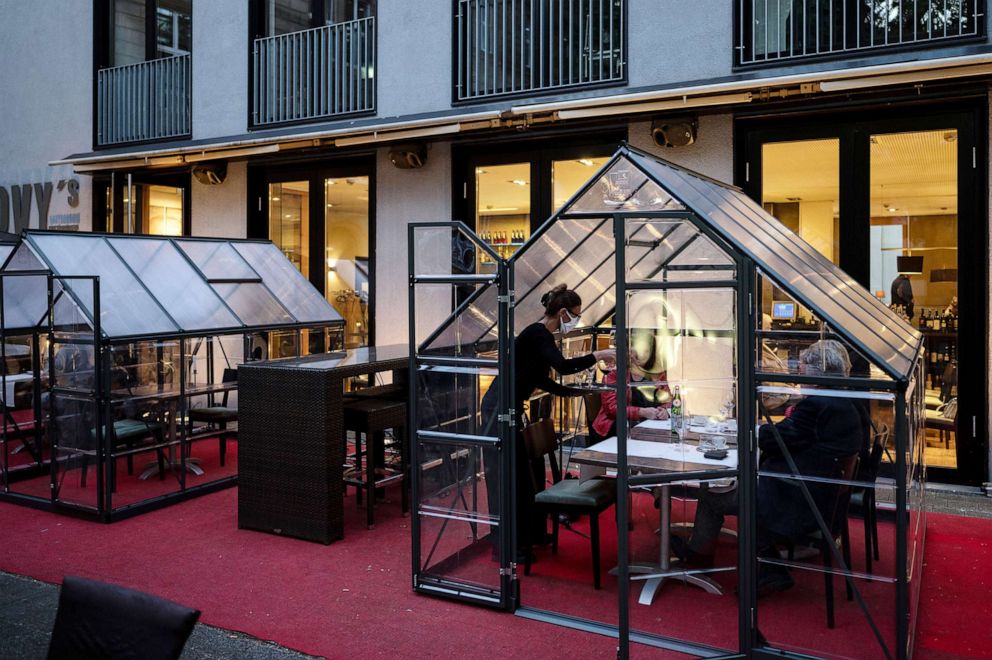 Bernd Thissen/picture alliance via Getty Images
In "Novy's Brasserie" guests are served at tables in small greenhouses, in Hagen, Germany, May 14, 2020.

A 3-D animation shows how one infected person could transmit virus to other diners within the dining igloo.

But if someone in your own dining party is infected, there is high potential to contract the virus because there’s very little airflow by design in these structures.

"I feel it’s only prudent to [be in an igloo] with people in your own household," Marr said. She also advised there should be sufficient time between seatings -- at least 20 minutes -- so the igloo can air out.

The "best case scenario," according to Marr, is "sitting outside under the great blue sky, no tent, no roof."

"If someone happens to be infected and is releasing viruses into the air, there’s more of an opportunity for the wind to carry it away," she said. "What happens is the virus becomes so dilute that the chances of any one person breathing in enough of those to get sick is very, very low." 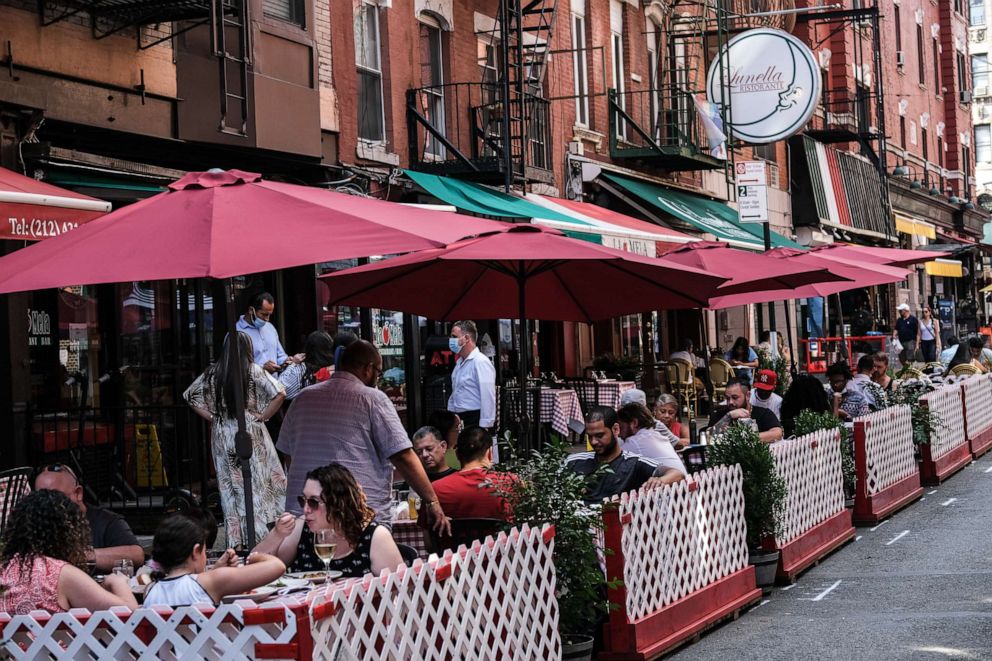 Marr explained that even outdoor diners should still behave as though they’re indoors. That includes keeping tables socially distanced, wearing a mask when not eating and minimizing contact with those outside your own party, such as the server.

A 3-D animation shows how virus particles dissipate in open air, with no ceiling or walls to restrict air flow.

"There’s no zero-risk scenario," Rimoin said, "because there’s no control who you’re seated next to and not wearing a mask." But she agreed with Marr that an open-sky scenario is the best option because "the more air circulating, the better it is." 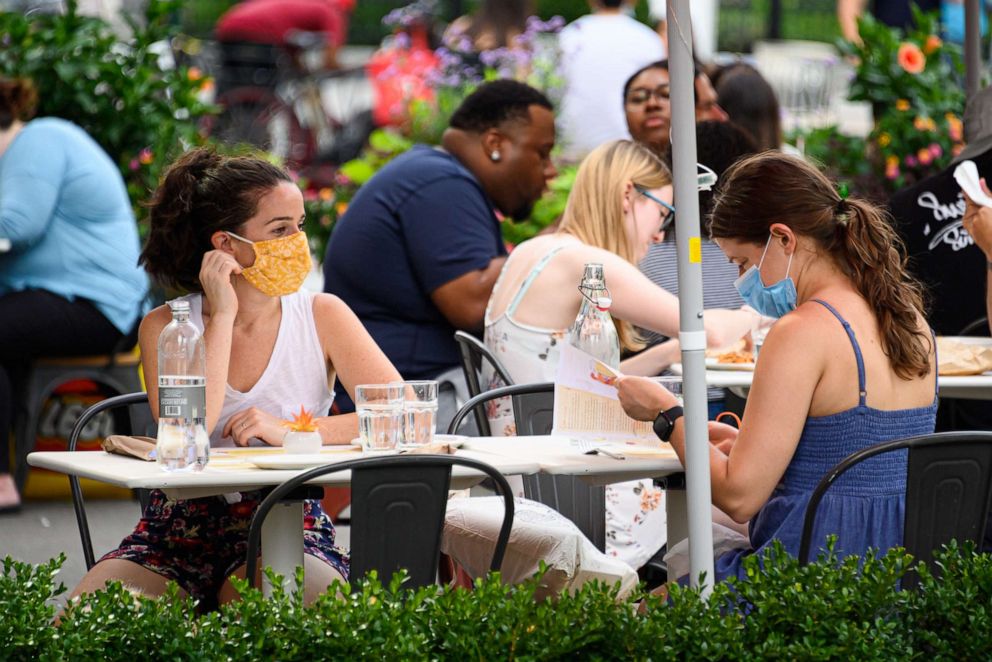 Noam Galai/Getty Images
People wear protective face masks at an outdoor restaurant in the Flatiron District as the city continues Phase 4 of re-opening following restrictions imposed to slow the spread of coronavirus on July 26, 2020 in New York City.

Experts also advise that restaurants reduce the level of background music and noise so that diners can speak more quietly.

According to Marr, a person releases particles just by breathing and talking, so the louder a person talks, the more particles -- or aerosols -- they release.

"If someone’s infected, they’re going to release viruses in aerosols as they talk. And so if we can, we should try and keep our voices down," Marr said.

And while heat lamps may make for a more comfortable evening outdoors, they have little effect on increasing air movement and won’t dilute the virus in the air, she added.