Aarón Sánchez is a prime example of a chef who puts his heritage on a plate and serves a portion of his story through cuisine -- all while preserving his own family's legacy through food and encouraging diversity in kitchens everywhere.

Beyond the pages of his book, "Where I Come From: Life Lessons from a Latino Chef," Sánchez is an advocate for the advancement of Latino youth through his eponymous scholarship fund that provides culinary education, mentorship and industry experience to diversify kitchen leadership for future generations.

To kick off Hispanic Latinx Heritage Month, Sánchez led a kitchen of students at the Institute of Culinary Education in New York City, which recently announced a new partnership with his organization, for a demonstration and conversation about cooking techniques and distinct flavors that make Mexican food so special.

"I'm super excited to be partnering with ICE and sending our students from the Aarón Sánchez Scholarship Fund here to this amazing institution," he told "Good Morning America." "It's a time to honor all of the contributions Latinos have made throughout our beautiful country."

"These dishes are a celebration of my culture and lineage as we are now celebrating Hispanic Heritage Month," he said. 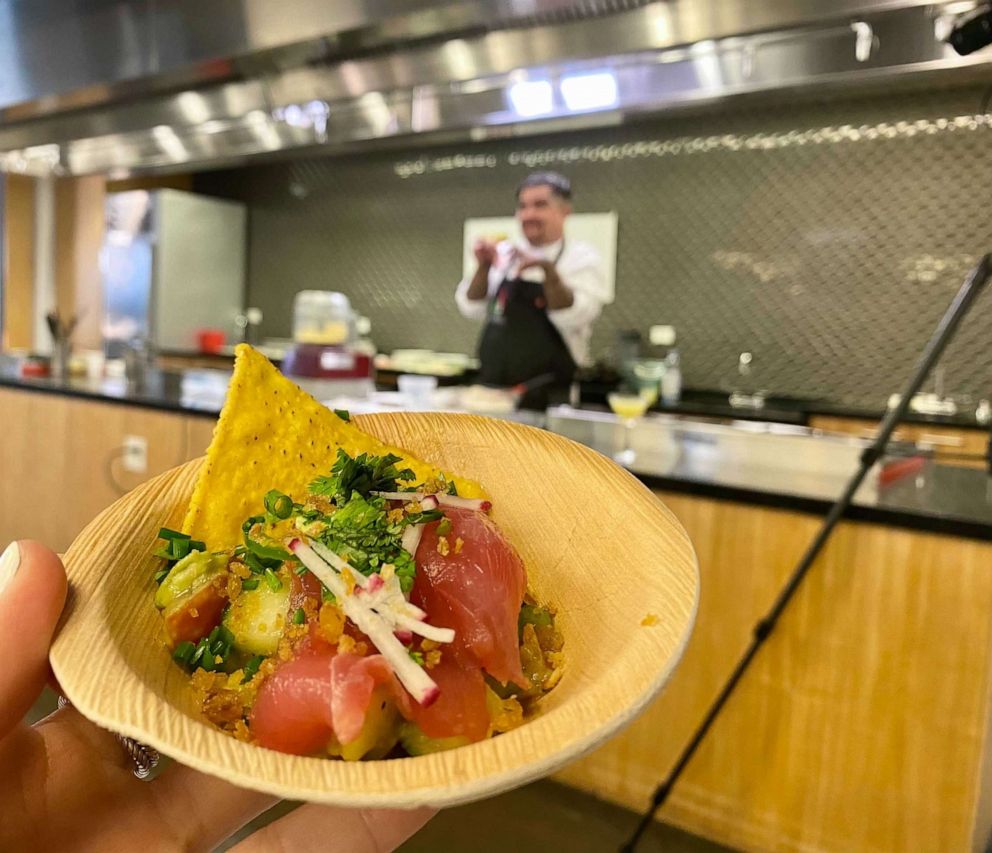 Kelly McCarthy
Bluefin tiradito made by chef Aarón Sánchez at the Institute of Culinary Education.

First, Sánchez prepared bluefin tuna tiradito, a traditional Peruvian raw fish dish much like crudo, which he said reflects the influence Japanese immigrants had in the South American region with ingredients and flavors of sashimi.

For the second dish, Sánchez made an elevated version of a traditional Mexican favorite -- sopes. His version of the fried masa recipe starts with handmade fresh corn dough that is griddled and topped with braised beef, epazote crust and melted bone marrow.

"Epazote is this beautiful herb that runs rampant on the countryside of Mexico and is traditionally used in bean dishes," he said of the herb used in the crust.

Check out the full recipe below, plus an additional burrito dish close to his family's heart that he shared with "GMA." 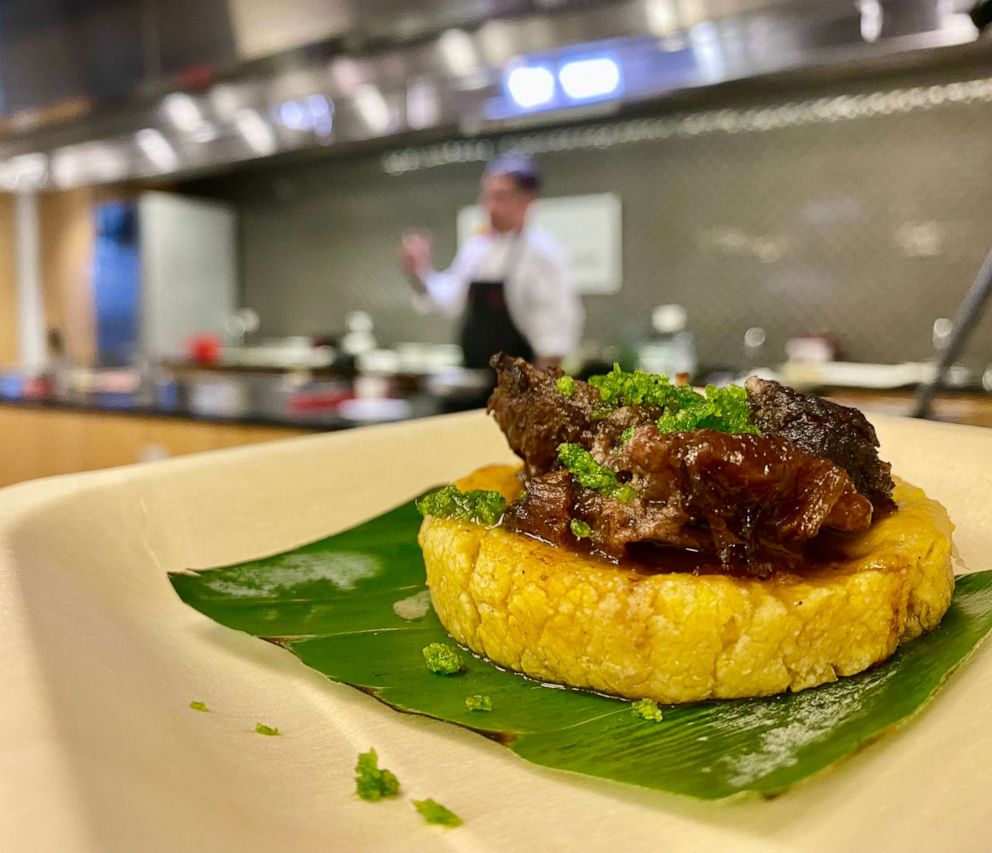 In a medium sized pot, bring about 1 gallon of water to a rolling boil. Season the water with salt until it tastes like the sea. Make an ice water bath and set aside. Blanch the cilantro and the epazote for about 45 seconds until bright green and tender. Shock in the ice water and then squeeze all water out. In a blender, puree until very smooth with the oil and then transfer to a food processor with the panko and blend until mixed thoroughly. Taste for seasoning.

For the sopes: Mix corn in the food processor, add the masa, baking powder, salt and the lard and puree until evenly mixed. Add the water to the masa and corn mix until combined and wet but not sticky to the touch.

To plate: Place banana leaf on corner of plate, put sopes on top of banana leaf. 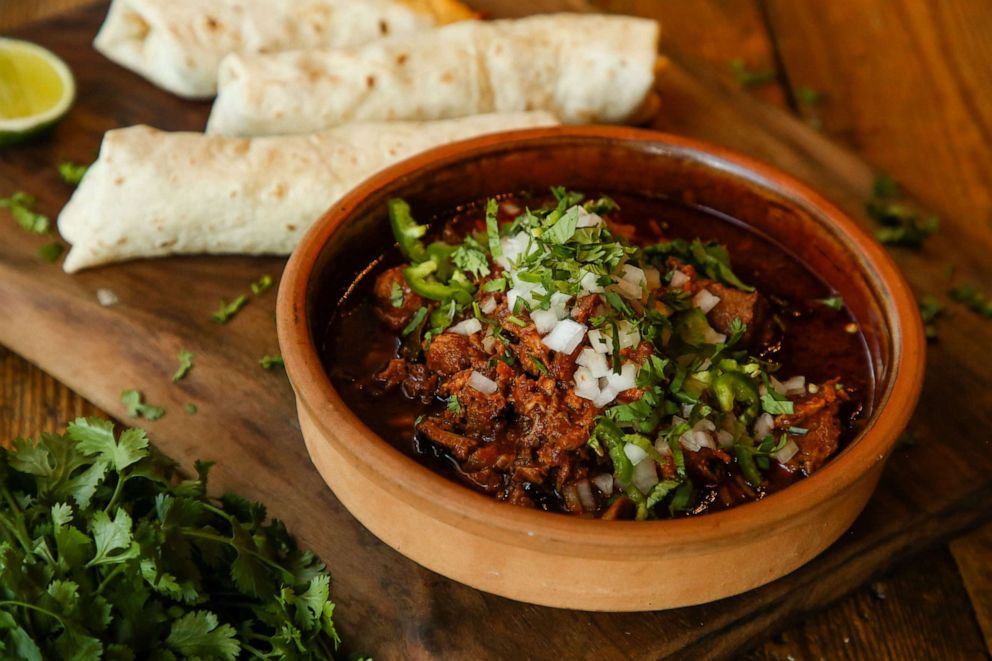 In a small saucepan, bring two cups of the stock to a simmer. Meanwhile, set a skillet over medium-high heat and toast the peppers (in batches, if need be) until they’re fragrant, slightly charred, and a little more pliable. Transfer them to a heatproof bowl, pour the simmering stock over them (weight them down with a small bowl if they won’t stay submerged), and set aside to steep for 30 minutes. When they’re soft, cut them open and scrape out some or all of the seeds (leave them in for spicier chili), then, in a blender, puree them with the steeping liquid until smooth.

Trim the fat from the beef and cut it into approximately 1-inch cubes; season with salt and black pepper.

In a large heavy-bottomed pot, warm two tablespoons of the oil over medium-high heat until it starts to shimmer. Line a baking sheet with paper towels or a metal rack.

Working in batches, sear pieces of beef on one side, leaving space between them so you don’t crowd the pan; cook undisturbed for two to three minutes, until nicely browned. Transfer immediately to the lined sheet, leaving the other sides raw (this helps it stay tender when it braises).

Adjust the heat to medium. Reserve two tablespoons of the onion for the rice; add the rest to the pot along with the bell pepper, carrot, and one and a half teaspoons salt. Sauté until the onion is soft, with a little color, five to 10 minutes. Stir in two-thirds of the garlic and the cumin, oregano and cinnamon, and toast for a minute or two, until fragrant.

Return the beef to the pot along with the bay leaves, chili sauce, and three cup of the stock. Adjust the heat to high just until the sauce comes to a simmer, then adjust the heat to medium-low, partially cover, and cook, stirring occasionally, until the meat is falling-apart tender, two and a half to three hours.

Meanwhile, make the rice: In a bowl, combine the tomato and the reserved two tablespoons of onion and the remaining garlic with one teaspoon salt. Set aside.

Rinse the rice until the water runs clear, shaking the sieve to get rid of excess water. In a large saucepan over medium-high heat, warm two tablespoons of the oil until it shimmers. Stir in the rice to coat it evenly in the oil, then adjust the heat to medium and keep cooking, stirring regularly, for five to eight minutes, or until the rice is fragrant and lightly golden.

Stir in the chopped tomato mixture and cook for a couple of minutes, until the tomatoes have melted into the rice. Pour in the remaining one and three quarter cups (420 ml) stock and adjust the heat to medium-high until the liquid is simmering. Cover, adjust the heat to medium-low, and cook until the liquid has been absorbed and the rice is tender, 15 to 20 minutes. If the rice finishes cooking but there is still more liquid, uncover the pot and keep cooking until the steam evaporates.

Remove the saucepan from the heat and sandwich a clean dishtowel between the lid and the pot; this helps absorb extra steam. After 15 minutes or so, fluff with a fork.

To make the burritos, preheat the oven to 400 degrees. Over the bottom of a 9 by 13-inch baking dish, spread a ladleful of the sauce from the cooked chili. Using a slotted spoon, scoop some beef into the center of each tortilla; add some rice.

Wrap burrito-style and arrange the burritos snugly, seam side down, in the dish. Ladle more sauce over all the burritos to cover, then sprinkle with the shredded Cheddar and bake for 10 to 15 minutes, until the sauce is bubbling and the cheese lightly browned. Garnish with Cotija and radishes; serve with a knife and fork (and napkin).