Nothing says Super Bowl Sunday like a heaping plate of nachos!

Food Network host and chef Sunny Anderson knows a thing or two about how to cook for a crowd. Her "touchdown" nachos that combine chorizo, a Mexican sausage, and ground beef -- topped with all the fixings and two types of drizzles -- is the perfect staple for game day. 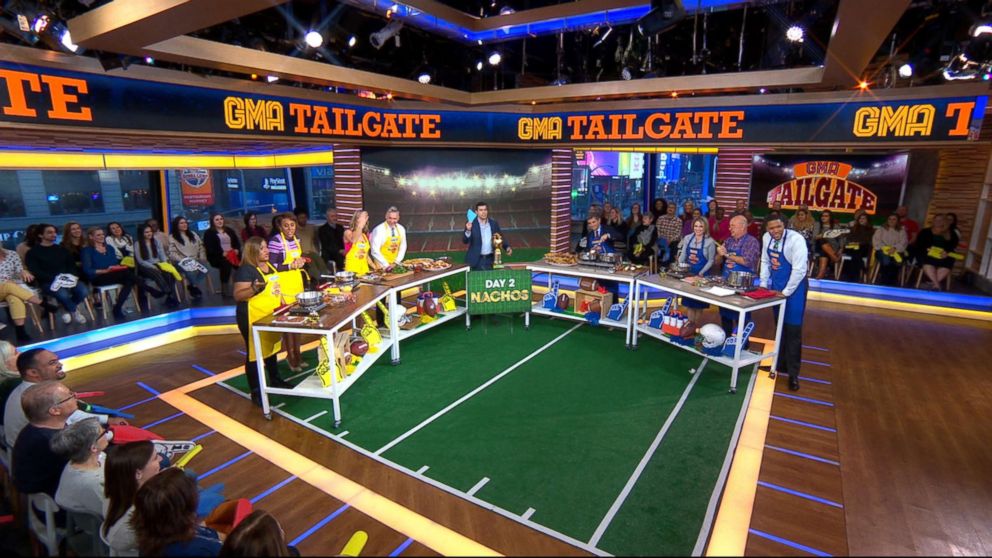 ABC News
Chefs faced off on "GMA" tailgate and made two of their top nacho recipes.

Chef and TV host Andrew Zimmern made the fan favorite dish with an added global cuisine flare. His Asian inspired wonton nachos are topped with a ginger and ground pork filling.

The chefs demonstrated how to put it all together on "Good Morning America" today and you can get her full recipe below. 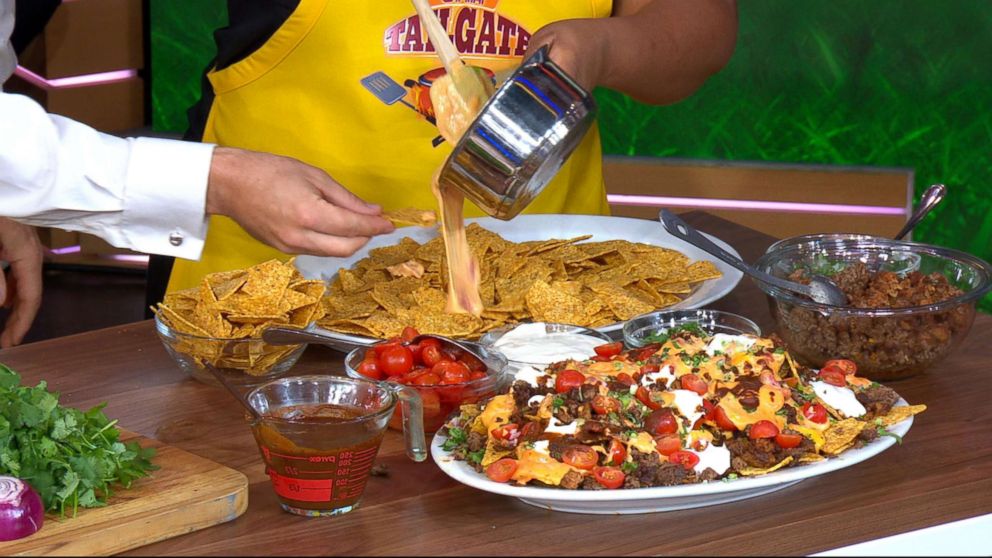 ABC News
Sunny Anderson made her "touchdown" nachos on "GMA."

In a large non-stick pan on medium high heat add the oil, chorizo, beef and salt. Vigorously break down the chorizo with a wooden spoon while browning to resemble ground meat crumble, not boulders or even rocks, pebbles. Brown until cooked through, about eight to ten minutes. Keep warm until ready to build.

In a large sauce pot on medium high heat add the cheese, tomatoes, chilies and cumin. Allow to melt and stir to coax the melting process. Keep warm until ready to build.

In a medium bowl toss the tomatoes and hot sauce.

Place half of the warmed chips on a serving platter. Sprinkle over half the meat, making sure to get the meat in the nooks and crannies. Pour over half the cheese sauce taking the same care. Top with the second half of the chips then repeat with the meat and cheese layers using the remaining portions. Sprinkle the tomatoes all around as well as the onion topping. Drizzle over mole sauce and Mexican crema. Serve immediately. 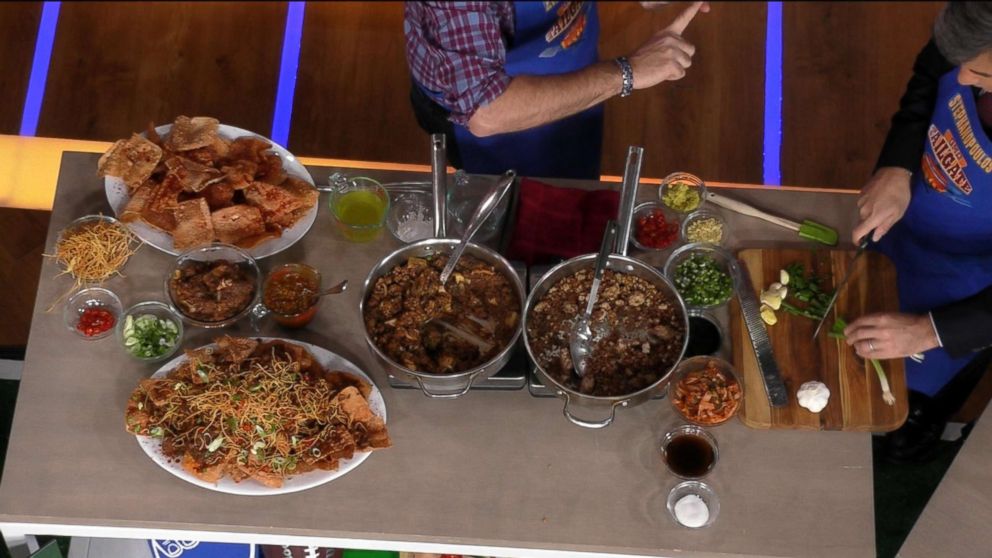 To prepare the won tons and noodles
Heat the oil in a large pot over medium heat until the temperature reaches 375 degrees.
Fry the wontons in batches until brown and crispy. Reserve to a large bowl lined with paper towels and when all won tons are fried, season with the salt and Chile pepper.
Fry the noodles, separating them with your fingers as they slip into the oil. Stir until light brown and reserve to a tray lined with paper toweling.

To prepare the sauce:
Whisk sesame paste and light soy sauce until fully incorporated.
Add Chinkiang vinegar. Keep stirring until mixed. Then mix in garlic, green onion, honey, chili oil and Sichuan peppercorn and mix well and then set aside.

To prepare the pork topping:
Heat the oil in a skillet or a wok over medium heat until hot. Add pork and light brown it.
Add ginger, garlic, green onion, fermented black beans, Sui Mi Ya Cai, cooking wine and sugar. Cook and stir until all the liquid has evaporated and the pork turns a dark brown color. Add the chicken broth and bring to a strong simmer.
Drizzle in the corn starch slurry; you wont need it all. Just use enough to thicken the liquid around the pork.

To assemble the wontons:
Spread the crisp wontons on a large platter or individual plates.
Divide the pork mixture in layers as you pile on the fried wontons.
Drizzle the sauce in layers with the pork mixture.
Garnish with thinly sliced scallions cut on the bias and the crispy fried noodles.