TikTok food creator Ahmad Alzahabi, known as The Golden Balance, has kept his viewers wanting more as he provides easy-to-follow recipes. The Muslim TikToker has lately been taking followers into his Ramadan cooking series, called "The Ramadan Chronicles."

Ramadan, the ninth month of the Islamic calendar, is considered one of the holiest Islamic months. Of the Five Pillars of Islam, the Ramadan fast is considered a compulsory act ordered by God.

Ramadan commemorates the revelation of the Quran, and Muslims fast, refraining from eating and drinking from dawn to dusk. Days are spent centered around faith, charity and gratitude. During this holy month, Muslims shift their focus to strengthening self-discipline and spirituality.

♬ Chillest in the Room - L.Dre

Born and raised in Flint, Michigan, Alzahabi's culinary career began when he was a young boy.

"My mom was never bothered if I was in the kitchen. She always welcomed me to help," the 25-year-old said.

Alzahabi began cooking for himself when his parents moved overseas.

Now, his TikTok account has taken followers along his journey during Ramadan, sharing his recipes for iftar -- the meal where Muslims break their fasts at dusk. His recipes range from global cuisines and TikTok trends to popular dishes with his own renditions, like mac and cheese with a Jamaican jerk twist.

♬ Chillest in the Room - L.Dre

It can be difficult to keep on track with a nutritious diet during the nighttime, so Alzahabi shares his process behind food choices and gives healthier alternatives to his recipes.

Healthy eating became a priority for him when he gained weight after he graduated high school and stopped playing sports.

"I started educating myself on how to have a healthy relationship with food while safely losing weight with a tasty meal," he said. "It doesn't have to taste bland to be good for you, you just have to know what you're doing. I learned how to make delicious substitutions that would help me keep off the weight."

"For example, if I wanted to make a chicken dish, I wouldn't fry it with oil."

During Ramadan, and because his goal is to maintain muscle mass, he prefers to eat a high-protein diet to remain satiated.

"When breaking their fasts, Muslims drink water and [eat] dates to replenish themselves, something the Prophet Muhammad would do as [they provide] many benefits [to] an empty stomach," Alzahabi explained. It's said that the Prophet Muhammad would break his fasts with dates, as they energize the body and are easily digested, are good source of fiber and carbs, and are high in vitamins such as potassium and magnesium.

"Muslims are to abstain from anything impure, the goal is to become a better version of yourself," he said. "I look forward to experiencing Ramadan, it feels like I'm cleansing my mind, body and soul." 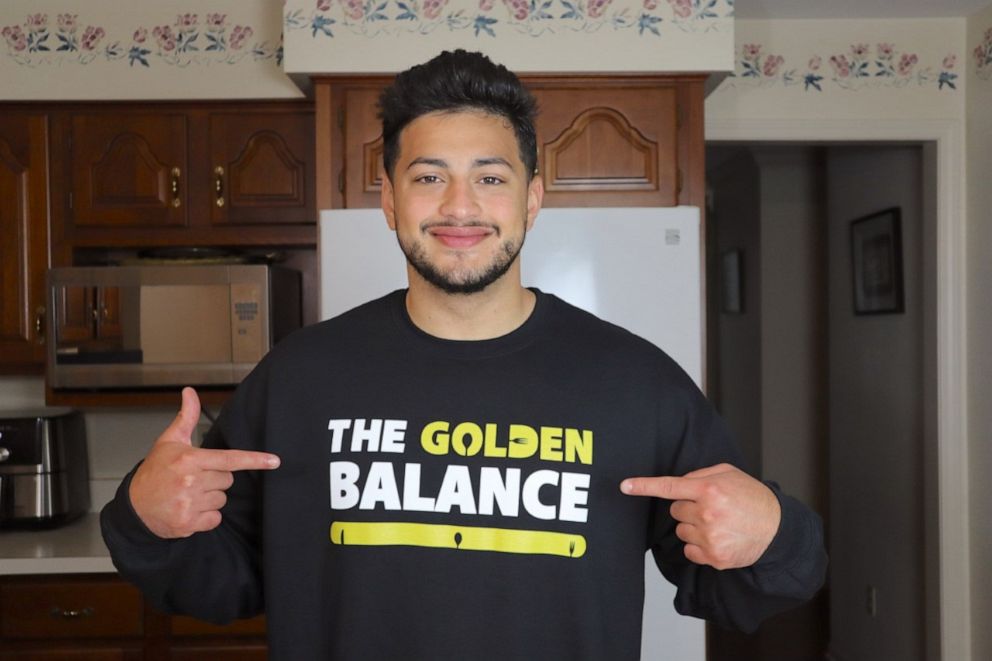 "Now Bismillah," Alzahabi continued, a popular saying viewers often hear right before he enjoys his meal. "'Bismillah' simply means, 'In the name of God.' It's what we say as a blessing before acting upon something, and in this case, it's eating."

As a Muslim food creator, Alzahabi told "Good Morning America" he's "found the best way to educate people on culture is through food" and that he is here "to teach what Ramadan is, as it's a part of who I am and embracing it."

"It's nice to normalize these conversations in a world of Islamophobia, to show that I'm just as American as the next," he said.

10 cloves (half for curry half for rice)

Start off with a generous amount of ghee, four-star anise, one bay leaf, six cardamom pods, one cinnamon stick, and five cloves and toast the spices for 1-2 minutes.

Then add one large red onion, one shallot and green chilis or jalapeños and cook down until translucent. Next, add two large tomatoes and cook for 5-10 minutes on medium heat.

When simmered down, add yogurt or labneh (kefir cheese) to make it creamy and thick. Add your salt, red chili powder, garam masala (optional fenugreek leaves), butchered chicken and submerge. Bring to a light bubble, cover and cook for 30 minutes.

Drain 75% cooked rice and transfer to the chicken mixture and cook for another 10-15 minutes until rice is tender. Be sure not to overcook the rice or it will turn mushy.

Mix well and finish with fried onions mint and cilantro.

Editor's note: This was originally published on May 7, 2021.