We are living in an age where women are supporting women more than ever. So it's about time we reserve a seat at their restaurant's tables!

An influx of leading ladies have popped up on the culinary scene over the years and their prominence in the mix is more than ever.

Now, just in time for International Women's Day, apps like Yelp and Caviar are making it easy to find and taste the food from all those female-led hot-spots across the country.

Nearly 70 percent of women business owners said it's important to support other businesses owned and operated by women, according to recent data from Square and Thumbtack.

(MORE: Meet 7 fierce female chefs setting a place at the table for women in the culinary industry)

Customers will see the "women-owned business" tag under the more business info section on the page. 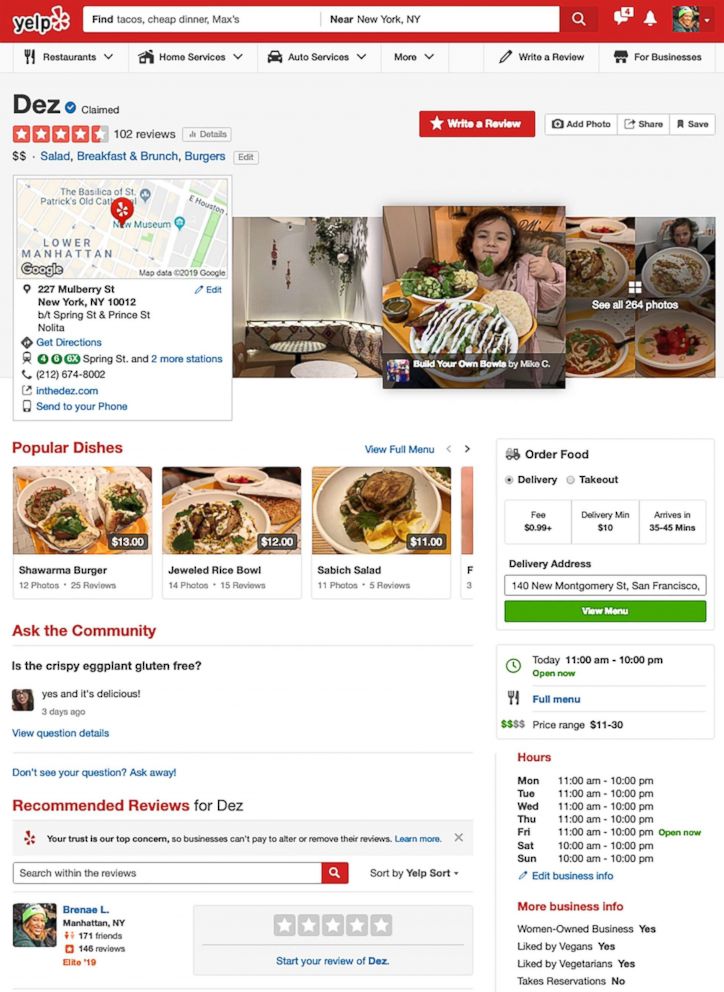 "We’re excited to elevate the profiles of the millions of women-owned businesses who drive the local economics of our cities and towns," Miriam Warren, Yelp's Vice President of Engagement, Diversity and Belonging told ABC News. "We’re hopeful that this new attribute not only makes it easier to discover great women-owned business on Yelp but also drives more dollars directly to the bottom line for these female-owned businesses."

(MORE: Chef Leah Cohen: 'Staying true to who I am really set me apart')

The popular review app and website announced the move in a blog post on Friday for Women's History Month in partnership with designer and CEO of Female Founder Collective, Rebecca Minkoff.

"If we can all find each other and help come together and support each other and the customer at the end of the day can support us, then we don't have to talk about female founders, we can just say founders," Minkoff said in the video.

Why we partnered with @RebeccaMinkoff and #femalefoundercollective to launch a women-owned attribute. #WomensHistoryMonth https://t.co/0xwpJ6sYdV

Eden Grinshpan, chef and owner of Dez in New York City, appeared in the video and said that support from other female leaders can make you feel "invincible."

"It makes you more human, and we should all be supporting and uplifting one another because then you really do feel invincible."

While the feature is not yet "searchable" on the site, the company told ABC News it plans to "assess the number of businesses that list themselves as women-owned and will reevaluate a search filter."

The popular food delivery app Caviar partnered with Pineapple, a collaborative platform for women to come together and explore their style, identity and values through good food.

Caviar kicked off its celebration of women in food with "Women-Powered with Pineapple," a new, permanent hub on the app that collects and highlights women-helmed restaurants, including chefs in the kitchen, business owners, and other leaders of diverse female forward teams.

Their goal is to make it seamless to identify and support the female chefs and restaurateurs in their cities.

Throughout the year this collection will steer diners towards options that support these women restaurateurs.

"When looking for a partner who shared our appreciation for the craft of cooking and understood the importance of creating communities through food, Caviar stood out as a natural fit," said Ariel Pasternak and Atara Bernstein, co-founders of pineapple collaborative said in an announcement.

"Ordering from the Women-Powered with pineapple collection on Caviar is an everyday action you can take to help support women around us, and we can’t wait to see where the year steers us and the women we’re all co-supporting."

Support women-led restaurants with @Grubhub's annual #RestaurantHER initiative—during #womenshistorymonth when you round up your change proceeds are donated directly to our Women’s Leadership Programs https://t.co/h1jYcH6wWd

GrubHub will help users find and support woman-led restaurants in an effort to "help make the restaurant industry a more equal place for women." For the month of March, the food delivery app and site will round up any change on a users order and donate it directly to the women's leadership programs withing the James Beard Foundation.