There's no denying that delivery drivers are doing the hard work this holiday season, working overtime to make sure gifts and packages are delivered in time for the holidays.

Kathy Ouma, of Middleton, Delaware, figured out a way to thank the people delivering her packages, by leaving snacks and drinks for the drivers on her front porch along with a thank-you message.

"I live in a multi-generational house and we have a lot of packages that come and go," Ouma told "Good Morning America." "We’re really grateful for our men and women who deliver in all types of weather and especially in the holiday season when they're so busy."

Ouma was home last week when she happened to hear a voice and what she described as "positive energy" outside her front door. When she reviewed her doorbell camera later that day, she saw a delighted Amazon delivery driver do a little dance in celebration of the snacks.

"Oh this is nice," the driver can be heard saying as he drops off the package. “They’ve got some goodies. Aw. This is sweet.”

Ouma's video went viral on Facebook with hundreds of thousands of shares, likes and comments.

Some people commented on Ouma's post with examples of how they're thanking delivery drivers, proving she is just one of the people across the country taking part in this generous holiday trend.

Laura Stoltz, of Newburgh, Indiana, has featured a "delivery driver Christmas cheer box" on her front porch for several years, making it as routine as hanging up the garland. 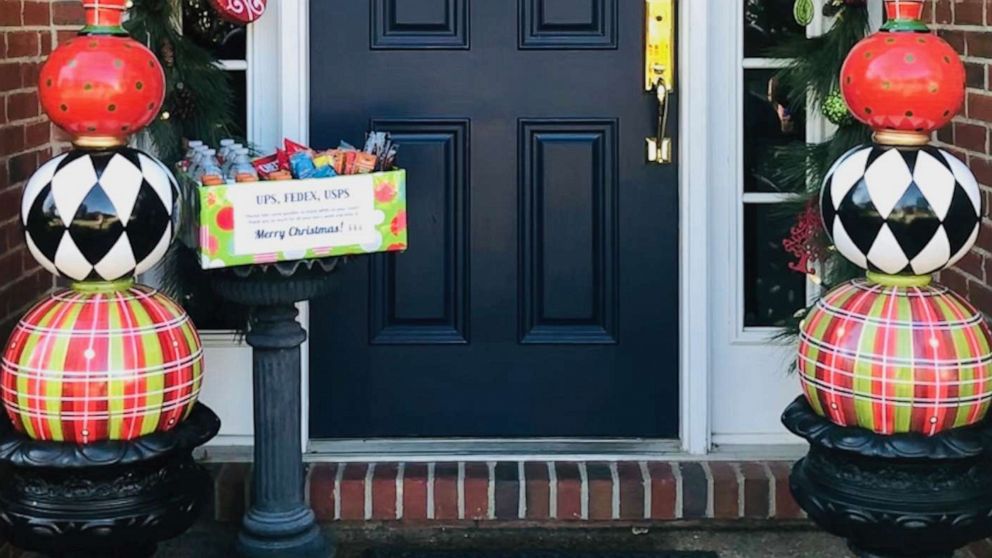 Courtesy Laura Stoltz
Laura Stoltz leaves snacks for delivery drivers outside her Indiana home to thank them during the holiday season.

She got the idea from Pinterest and passed it on to her sister-in-law Ashley Sollars, digital managing editor for WKDQ-FM in Evansville, Indiana. Sollars created a free printable for homeowners to use to let the delivery drivers know they can help themselves to the treats.

"The generosity of our communities is really incredible," said Sollars, who recommends putting the note in a plastic sleeve to keep it protected outside. "After posting this, lots of people followed suit and are posting pics of their own version of the 'delivery driver Christmas cheer box.'"

(MORE: 11-year-old El Paso boy creates #ElPasoChallenge calling for 22 acts of kindness in honor of those who lost their lives)

Several states away, in Texas, another mom, Courtney DeFeo, has over the past eight years turned thanking people during the holidays into a movement called Light 'Em Up.

"Around 2011, I had two little kids at home and was a stay-at-home mom coming out of a [corporate] career," DeFeo told "GMA." "We were so focused at Christmastime on what we were getting personally and as a family that I thought, 'That’s not what I want our focus to be and how can I flip the switch?"

DeFeo started by asking her daughters, 2 and 4 at the time, who they wanted to thank. The girls first thought of people like garbage men and women and postal workers and it soon grew to everyone from security guards to delivery drivers. 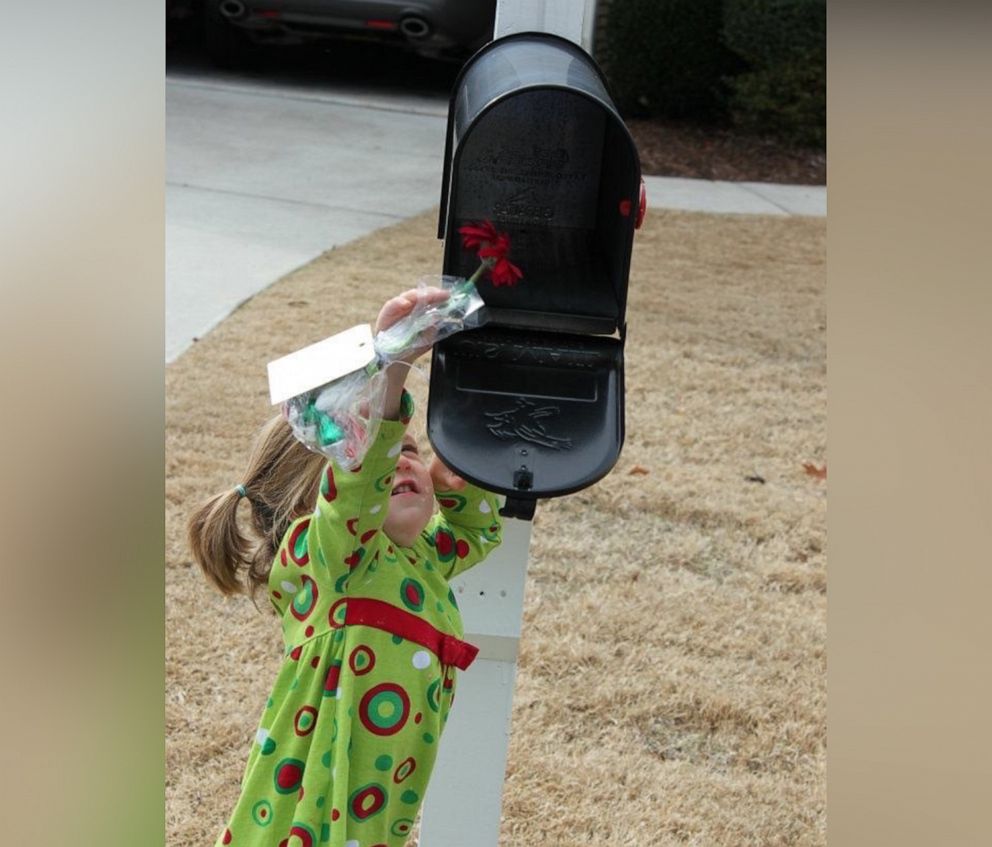 Courtesy Courtney DeFeo
Courtney DeFeo's daughter Larson, then 2, puts a thank you note in the mailbox for the family's mail carrier in an undated handout photo.

"We put up a poster that said, 'Thank you for picking up our trash. We’re so grateful,'" recalled DeFeo. "I also took candy canes and put little gift tags on them so the kids could walk up to a security guard or someone and say thank you and hand it to them."

DeFeo began to share ideas on her blog about how families could say thanks and soon had a list of 100 ideas she shared.

"It just was so addicting," DeFeo said of thanking people. "My whole thought was how I can make this really easy for people so I made a list."

People now share their own ideas and examples on social media using the hashtag #LightEmUpActs.

DeFeo's daughters, now 13 and 10, still do #LightEmUpActs throughout the year and especially during the holidays. 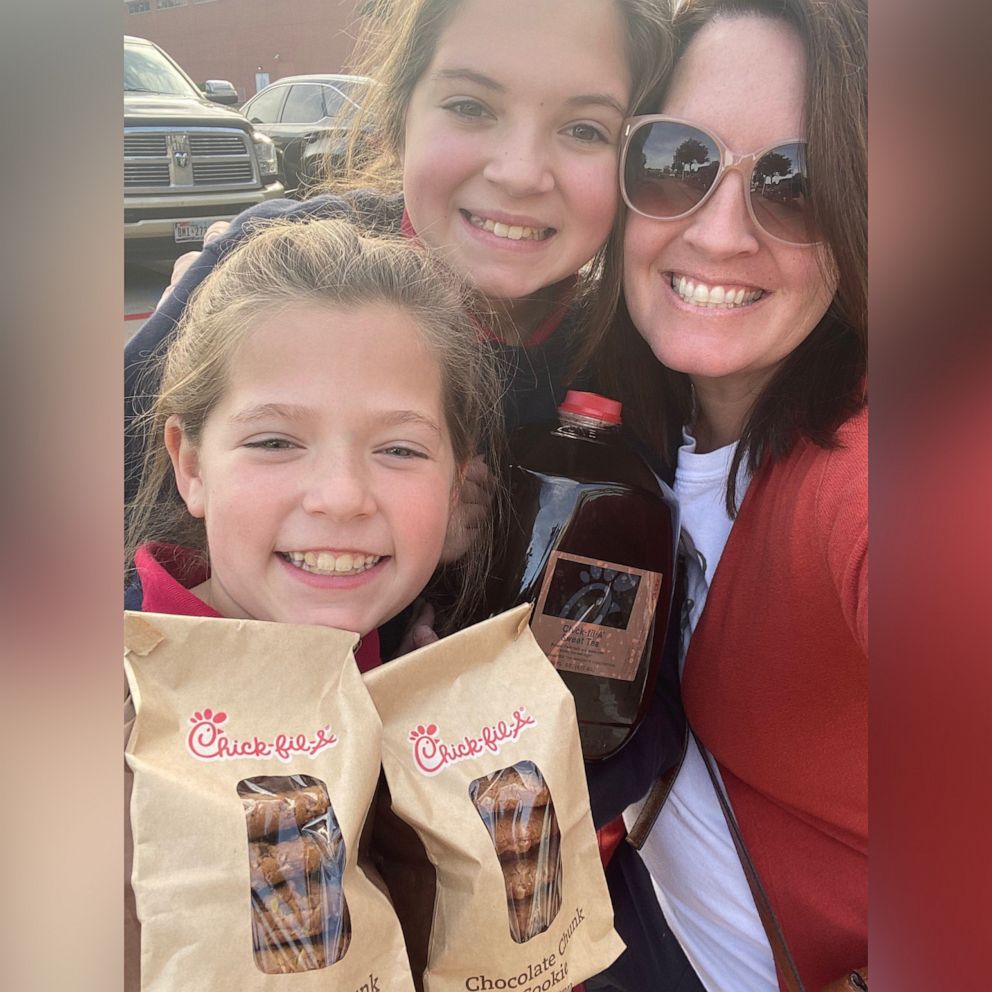 Courtesy Courtney DeFeo
Courtney Defeo, of Texas, poses with her daughters Ella and Larson as they hold thank you treats to deliver.

"We’ve seen tears, hugs and we’ve seen people squeal," DeFeo said of the reactions. "They start watching what little acts of kindness and just being seen and appreciated can do to someone’s day. Just a smile or a thank you or a candy cane or a note makes a difference."