Ruben Martinez, 11, was on his way home from a fundraiser with his mom Saturday in their native El Paso, Texas, when they drove by first responders at the local Walmart they had shopped at just the day before.

When Ruben and his mom, Rose Gandarilla, got to their home and learned about the mass shooting at the Walmart that killed at least 22 people, Ruben became “very anxious,” according to Gandarilla.

“He asked if we could get a delivery service to deliver all of our groceries and everything we needed so we wouldn’t have to leave home,” she said. “We stayed inside most of the weekend.”

(MORE: Families of victims in El Paso Walmart massacre will not have to pay for funerals)
Editor's Picks

They day after the shooting, when Ruben began to ask his mom even more questions about why the shooting happened and what he could do to help, Gandarilla challenged her son to think of an idea that would “show the kindness of El Paso.”

Nearly 30 minutes later, Ruben, an incoming sixth grader, emerged with a notebook full of ideas. At the top of the notebook he had written out a hashtag, #ElPasoChallenge. 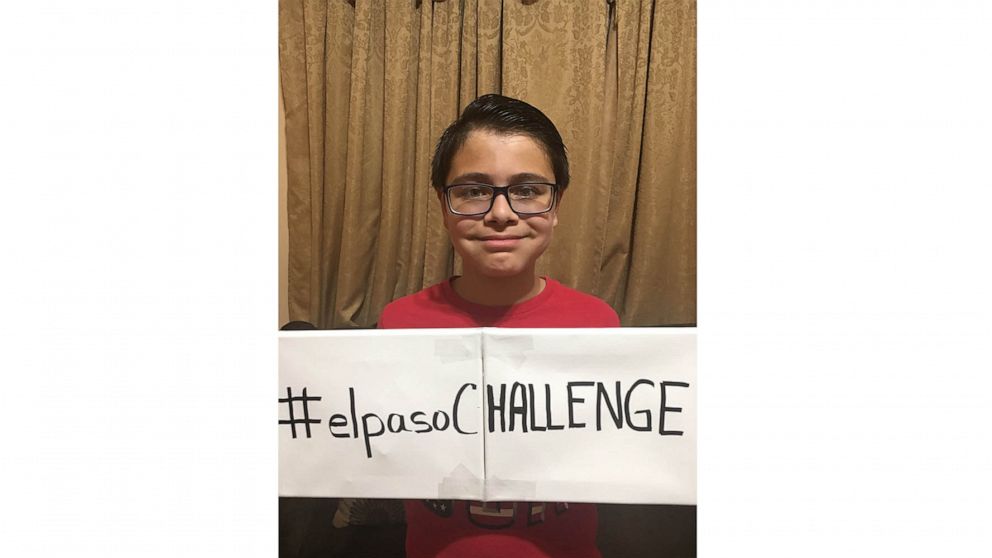 Rose Gandarilla
Ruben Martinez, 11, created a kindness challenge in the wake of the mass shooting in El Paso, Texas.

Ruben’s challenge is for people to do 22 good deeds or acts of kindness in memory of the 22 people killed in the shooting.

One of the victim’s in Saturday’s shooting was just four years older than Ruben. Those wounded in the mass shooting ranged in age from 2 years old to 82, according to authorities.

Ruben originally wrote his challenge as 20 good deeds but then increased it to 22 good deeds as the death toll from the mass shooting continued to rise.

“I want to show people that El Pasoans are good,” Ruben said. “They’re loving and are caring and are willing to do anything to help out.”

Ruben went out for the first time after the shooting on Sunday evening to kick off the challenge. He and his mom bought food from Taco Bell and delivered it to first responders.

(MORE: After El Paso and Dayton shootings, how to cope with the stress of the news)

On Monday, they went to a few stores and public places so that Ruben, wearing a shirt and carrying a sign with his challenge’s hashtag, could talk to people about the #ElPasoChallenge.

“What I explain to people is, ‘We’re doing the hashtag El Paso Challenge and we challenge everyone to do 22 acts of good deeds in honor of the 22 people who were killed,’” he said. “’The man who did that was full of hate but we want to show everyone that El Pasoans are innocent and they really are kind.”

Gandarilla, a local school administrator, posted the challenge on her social media thinking some students and fellow school officials would be able to help spread the message.

My 11 year old came to me with an idea. #elpasoCHALLENGE He challenges ALL El Pasoans to commit 20 Random Acts of Kindness. One for every person that was killed in our city’s mass shooting. Let’s get this done El Paso. @abc7breaking @kels1142 @YsletaISD @EPPOLICE @elpasoisd pic.twitter.com/pvy5Q9G4f6

Instead, her tweet has more than 1,500 retweets, thousands of likes and has reached people as far away as Germany.

“It’s just gone completely beyond what we expected,” Gandarilla said. “I even got a message from a local counselor who said his act of kindness would be to offer services to my son if he continued to be anxious.”

Ruben said seeing the kindness in people is already helping him move forward.

“It’s been great knowing everybody can help,” he said. “The most important thing is for people to be kind all day, every day, all night, every night.”