Three Girl Scouts have found a touching way to put a smile on the faces of medical workers who are on the front lines helping those most affected by the novel coronavirus.

When three Virginia Beach-based sisters, Sylvie, 14, Julia, 9, and Piper, 6, realized it wouldn't be the best idea to set up their usual booth outside a local Walmart or Kroger because of the many coronavirus-related shutdowns, their mom, Kacey Farrell, a co-leader of two of the local troops, told "Good Morning America" that "we knew we had to get creative."

"Between our three different troops, we were looking at an inventory of around 600 boxes," Farrell said.

That led to the decision to create a virtual cookie booth.

"I started looking online through some private Facebook Girl Scout groups and read that someone had once done a Facebook Live cookie telethon," Farrell said. "I loved that idea and started talking about similar possibilities with my girls."

From there, her teenage daughter, Sylvie, was able to shoot and direct a video of her younger sisters introducing their online Girl Scout cookie booth.

"As you all know, the coronavirus is everywhere right now," Julia says at the beginning of the video. Piper chimes in, "We're not allowed to leave our house."

They both go on to explain how they would like to donate the $4 boxes of cookies to medical first responders, and donations can be sent via Farrell's PayPal account.

On March 13, Kacey further promoted the digital cookie booth on social media to help get the word out.

"I decided to post it on my personal Facebook page and figured, 'Well, I bet the girls' grandparents will think this is cute and hopefully they'll share it with their friends, too,'" Farrell said. "Right away, people started liking it and sharing it, and that first night just blew me away."

"Donations came in from our friends and family from all over the world," she continued. "Friends of friends started donating boxes. We even got donations from other local Girl Scout leaders who I know are facing the same exact situation with their own troop inventories." 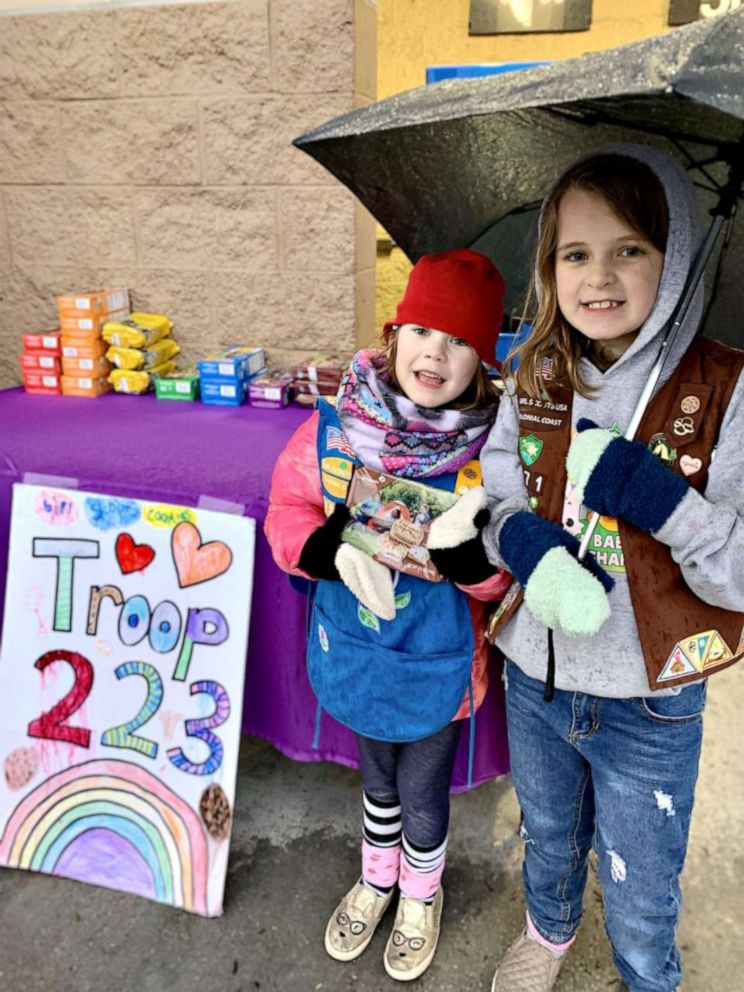 Since posting on Facebook, the sisters' video had received over 1,800 views.

"With everything going on right now, it seems like our doctors and nurses are going to be hit so hard," Farrell said. "Girl Scout cookies are a small way to say thank you, but it felt like an easy opportunity to let our frontline responders know how grateful and supportive we are."

On the official Girl Scouts blog, there's a recommendation to suspend all cookie booths based on CDC and World Health Organization guidance.

"We applaud our young cookie entrepreneurs for their enterprising spirit and willingness to lead during this time of uncertainty," GSUSA shared in a statement with "GMA." "These Girl Scouts are truly tomorrow's business leaders, and they're showing today's executives what savvy looks like." 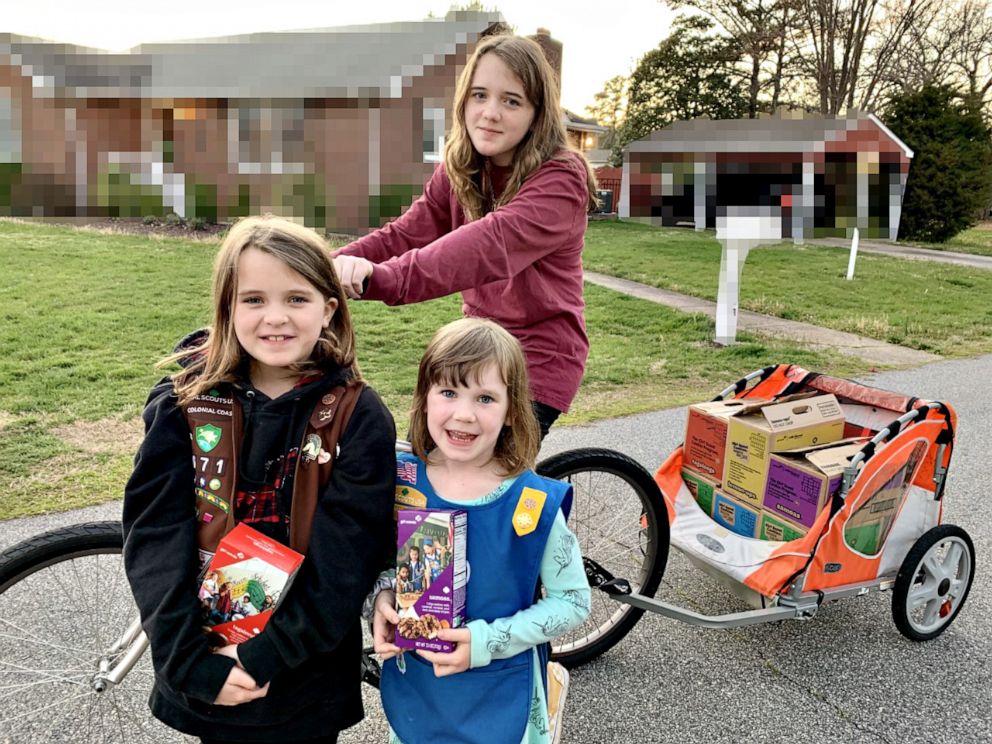 Girl Scouts of the Colonial Coast CEO Tracy Keller also gave kudos to the girls for their creative efforts during this time.

"Our goal is to build girls of courage, confidence and character who can handle tough situations and who are eager to help their communities. This is a perfect example," she said. "We applaud these girls and the thousands of others throughout the country who are running their own cookie businesses and finding ways to make a difference."

"Girl Scouts has offered a digital cookie platform for a while now, but this was our first time ever doing an online video booth and fundraiser," Farrell said.

"The feedback has been great," she excitingly added. "So many messages saying that it was exactly the cute little burst of happiness people needed right now. The girls are so happy, and I am just so proud of them. This was a truly girl-led adventure for them, from setting up the rainbow cookie boxes in the video to making the hand-drawn signs to deciding to have a little dance party on the table. ... At one point, Sylvie asked me to leave the room because I was 'distracting them.' I was happy to turn it over to them, and they did a great job."