Keep a close look at the night sky in December and you may see a rare occurrence between the two biggest planets in our solar system.

From now until Dec. 21, Jupiter and Saturn will continue to get closer until they are just 0.1 degrees apart and form a "double planet," according to NASA. And there's a good chance you'll be able to see it for yourself!

The two planets may even resemble a "Christmas Star" with the event happening so close to Santa's big day.

The space agency describes the rarity of the 2020 event in-depth in its December Skywatching page. The rare event is officially called a "great conjunction."

"These occur every 20 years this century as the orbits of Earth, Jupiter, and Saturn periodically align making these two outer planets appear close together in our nighttime sky," NASA writes.

And while these occurrences happen every 20 years, the Earth's proximity to the sun can worsen visibility and prevent he majority of people from seeing it, as happened in 2000.

"This is the closest they've been in hundreds of years," Throop said of the historical significance of this year's conjunction.

The last time the two planets were this close and visible from Earth was in 1623, just 14 years after Galileo built his first telescope and around the time Jupiter's moons were discovered. Humankind was still learning about the two planets and solar system in general, the astronomer said.

"I guess you could say it ties the discovery of Galileo's discovery of the moons of Jupiter and the rings of Saturn back because those two bodies are coming together again," Throop said.

The planets will appear so close that "if you were to stick your finger out at your at arm's length ... and look up in the sky, you can cover both Jupiter and Saturn with your finger," Throop told "GMA." 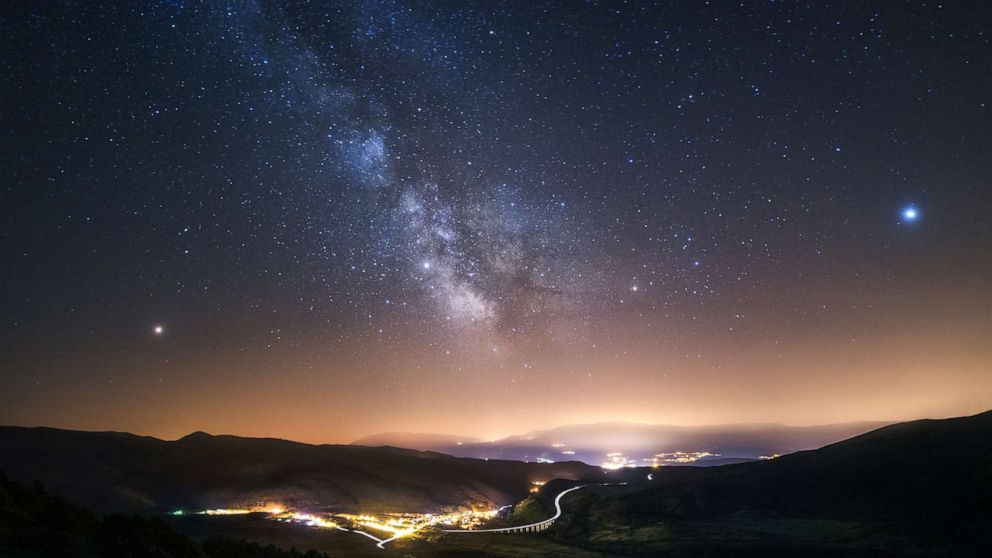 Dneutral Han/Getty Images, FILE
This undated file photo shows the town of Assergi, Italy. The bright reddish star at left is Mars, Saturn is at the middle of the image, and the bright star on the right is Jupiter.

Sky watchers can differentiate Saturn and Jupiter from the stars because the planets will appear "brighter and more solid in the sky."

Most locations will have an excellent vantage point of the celestial event with the naked eye. And for those with a telescope or DSLR camera with a long lens, you can likely see Jupiter's four moons lined up, as well.

It's best to look for the planets low in the southwest sky in the hour after sunset.

"What's cool about Jupiter and Saturn is that they are really, really bright. And you can see them pretty much from anywhere on the Earth. And so anybody in any city, once it is not cloudy, you can go out and see these things and they appear as two really bright points in the sky," said Throop.

Even if it's cloudy on Dec. 21, Throop said the planets will be visible as they get closer leading up to the date and as they slowly separate afterward, giving you about a month to witness it in the sky for yourself.