At the end of a math lesson that Diane Moon taught virtually earlier this month to her students, the middle school teacher in Illinois had star-shaped stickers covering her face.

It was all part of an effort by Moon and other teachers across the country to keep their students engaged as remote learning continues as the coronavirus pandemic worsens in the United States.

"It’s been really difficult," Moon, in her sixth year of teaching in Prospect Heights, Illinois, said of trying to teach her students through computer screens. "Sometimes I feel like I’m just talking to myself or teaching to a blank screen and it’s just slower because I have to wait for students to respond."

That struggle to engage her students is why Moon says she has no hesitation when a colleague showed her a TikTok video in which a teacher put a sticker on her face each time a new student spoke out during class.

"I put some competition into it because I made it a face-off between my three core classes," she said. "I told them that every time someone new participated, I would put a new sticker on and we’ll see which class has the most."

MORE: This 69-year-old physics professor's extra demonstrations for his class have won our hearts

Moon said she heard from students who had not spoken out all semester, and saw her students come together and encourage each other to speak up, saying things like, "It’s okay if [the answer is] wrong," according to Moon.

Inspired by the success, Moon took a video of her face covered in stickers and shared it on Twitter, where it went viral.

A colleague shared a video of a teacher putting stickers on her face every time a new student participated. I tried out the idea, and my classes were determined to get as many stickers on my face in an hour! Needless to say, I looked crazy by the end of it! 🤪 #whateverittakes pic.twitter.com/grH06S92Yq

Krista Coletti, a fifth-grade teacher in Indiana, saw the idea and decided to try it with her students, who are in a hybrid model of learning remotely and in-person.

"As soon as I pulled the stickers out, the kids, of course loved it. What kid wouldn’t want to see stickers on their teacher?" said Coletti, who teaches at Horizon Elementary School in Mishawaka, Indiana. "I immediately heard from kids I don’t normally hear from."

As promised, @foxster20 - a pic from our math test review. Ss send their thanks for the idea... obvi they LOVED covering my face with stickers 😆🌟🥰 #WhateverItTakes pic.twitter.com/4sA2dcUl2i

Coletti said she also noticed her students seemed to absorb the lesson better the more they became engaged. By the end of the school day, Coletti and two other teachers who saw her doing it and were inspired to follow were covered in stickers.

MORE: With teachers hard to find, parents step in as substitutes to keep schools operating

Arber Tasimi, a first-year psychology professor at Emory University, said he too saw the sticker idea on Twitter and decided to give it a try with his undergraduate students.

"This is a new system for us all, both teachers and students," he said. "And just like [students] are trying to navigate this space, so are we as teachers." 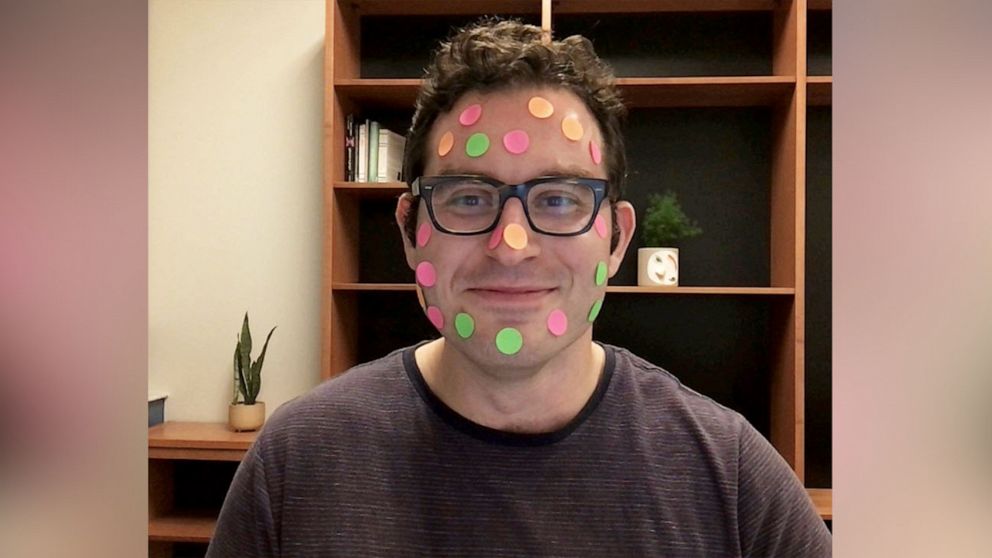 Tasimi said that he too heard from students who had not spoken up in previous classes by simply using stickers on his face as an incentive.

"The broader lesson is step outside the box and be creative, and also share your creativity with others," he said. "One teacher shared this effective method with the rest of us."

In response to Moon's tweet, another teacher later shared that she was now using pipe cleaners in her hair to encourage students to turn on their cameras and speak up in class.

The stickers started to irritate skin 😳 so we moved on to pipe cleaners in hair! Huge HIT! We recommend 👍🏼 pic.twitter.com/Cn9gdnkekU

"It shows that we’re all doing all we can to get involved," said Moon. "We’re all finding ways to engage students."