By Lara Priluck
Share —
Sign up for our newsletters to get GMA delivered to your inbox every morning!

"I believe fervently that to listen to a witness is to become a witness."

The quote from Holocaust survivor and Nobel laureate Elie Wiesel is featured prominently on a wall at the Museum of Tolerance in Los Angeles, and manifests itself in 10 portraits of Holocaust survivors painted by 17-year-old Sherman Oaks, California, high school student Sophia Soll, whose virtual exhibition, "Becoming a Witness," debuted last month to a virtual crowd.

"People usually say that's kind of scary or unsettling to see these colors within human anatomy, and I say that's what makes my paintings so human," Soll said. "I'm focusing and exaggerating these human qualities." 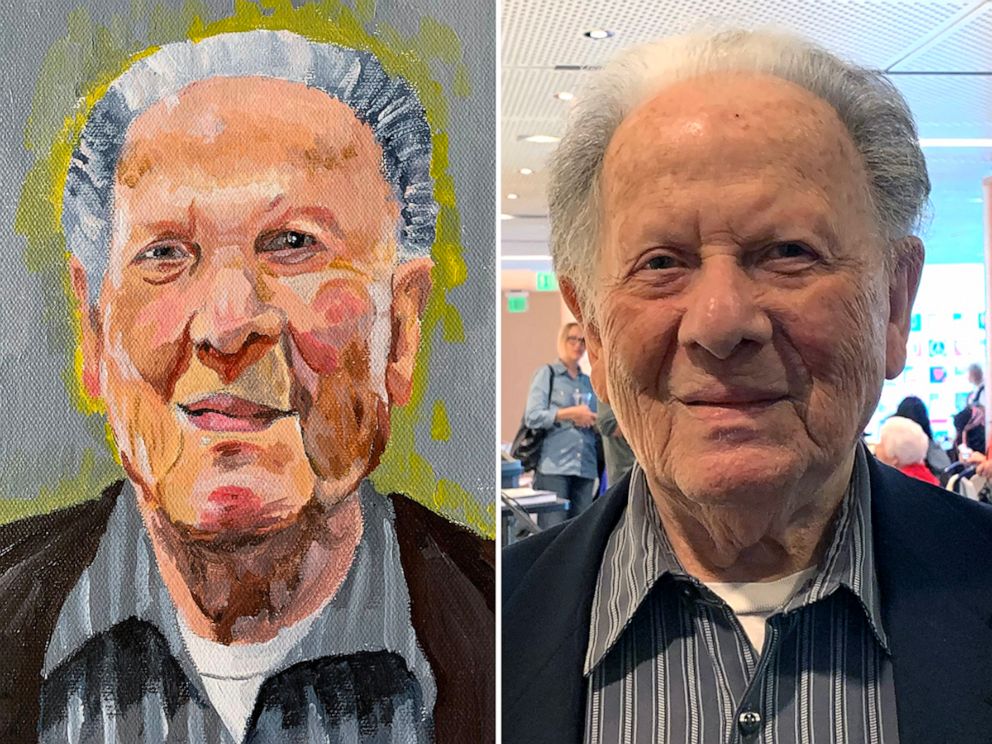 Courtesy Sophia Soll
Ernest Weiss, who was photographed for the "Becoming a Witness" exhibition on display at the Museum of Tolerance in Los Angeles.

Indeed, the portraits are striking, composed of warm green and purple acrylics -- colors, Soll notes, not generally used for skin. From behind each of their heads peeks out a bright yellow halo.

MORE: A 75-year-old Passover sweater, and the story of the Holocaust survivor who wears it

Soll was initially captivated by the humanity of these Holocaust survivors when she met them at a lunch organized by the Museum of Tolerance's MOTivating Teen Volunteer program, a year-long program in which teens listen to Holocaust survivors' testimonies, familiarize themselves with the museum's archive and work on projects to promote tolerance within their own communities.

Before attending the lunch last year, Soll came across black-and-white photographs online of each of the survivors, and she remembered a feeling of coldness and disconnection. 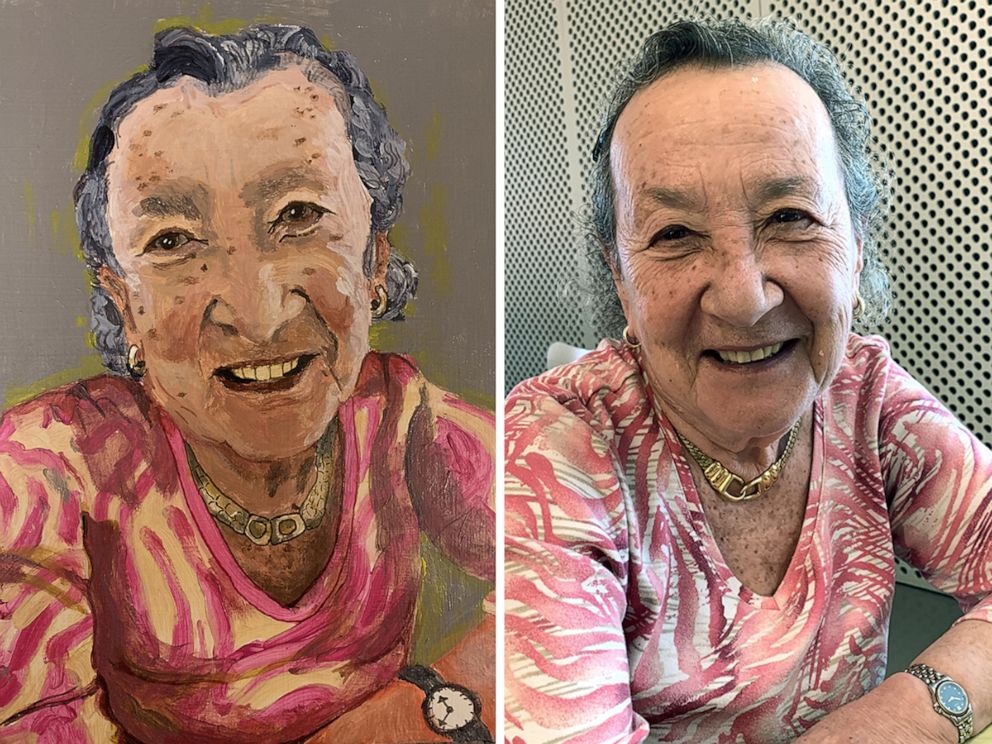 Courtesy Sophia Soll
A portrait of Louise Lerner, painted by Sophia Soll as part of her "Becoming a Witness" exhibition on display at the Museum of Tolerance in Los Angeles.

"But it was exactly the opposite," Soll said. After meeting them and hearing their stories, she felt a sense of warmth and humanity the photographs didn't convey to her.

"They were just so open and willing to share their stories, and they were willing to make human connections," she said. "It made me cry about it, because I was so confused that these people -- who have been through so much trauma -- you would think they'd be cold and embittered, but it was exactly the opposite."

One story Soll came across was the testimony of Walter Bodlander, whose family fled Nazi Germany following Kristallnacht, or, "the Night of Broken Glass," in which Nazi paramilitary forces and German citizens destroyed Jewish storefronts, homes, hospitals and schools on Nov. 9-10 in 1938, as German authorities stood by.

Bodlander first tried to join the French army but was rejected and even threatened with internment because he was German.

He eventually received a visa to the United States in 1941 and joined the Army after the attacks on Pearl Harbor, when congress passed a law permitting resident non-citizens to volunteer service. Bodlander served as an intelligence officer and was one of the first men to land at Utah Beach in Normandy on D-Day.

"Not only did he survive it, but he came back to fight them -- that's courage, strength, that's everything," Soll said. Everything she hopes her portraits document. 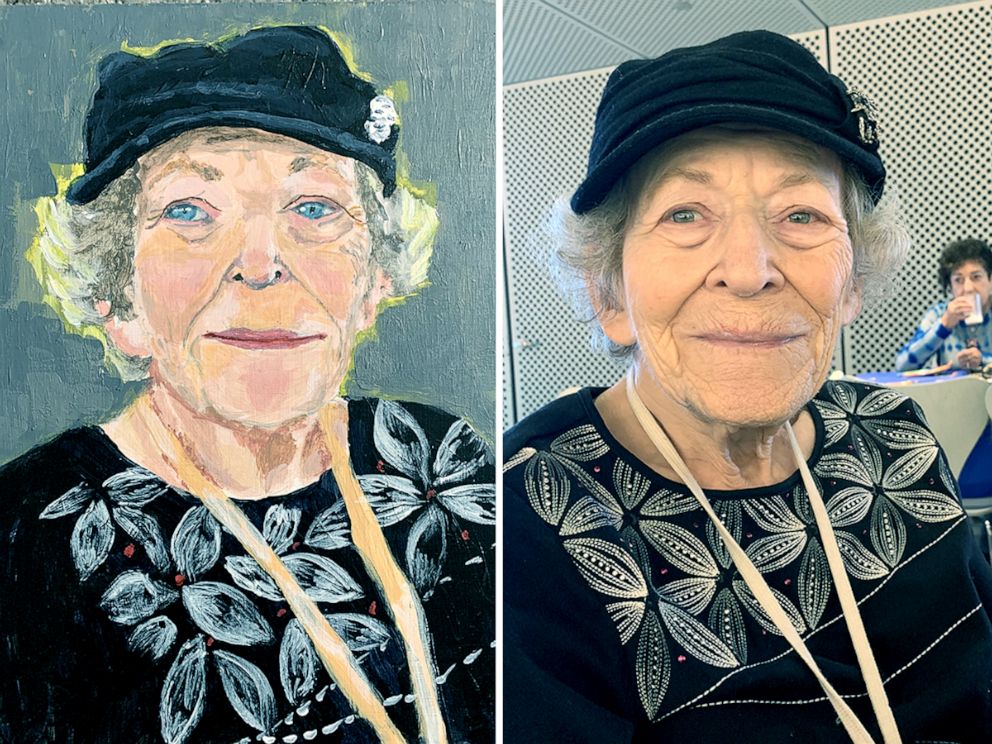 Courtesy Sophia Soll
A portrait of Henny Roth, painted by Sophia Soll as part of her "Becoming a Witness" exhibition on display at the Museum of Tolerance in Los Angeles.

Bodlander died at age 100 in February, before Soll finished his portrait.

"He never got to see it. I was super upset," she said. His passing also reinforced a sense of urgency commonly discussed in Holocaust education to document the lives of survivors as the population continues to age.

This urgency also resounds in the work of Elana Samuels, director of the Museum of Tolerance's volunteer services and creator of the MOTivating Teen Program. She's particularly proud of the way in which teens participating in her program form intergenerational relationships with the survivors by meeting and interacting with them. 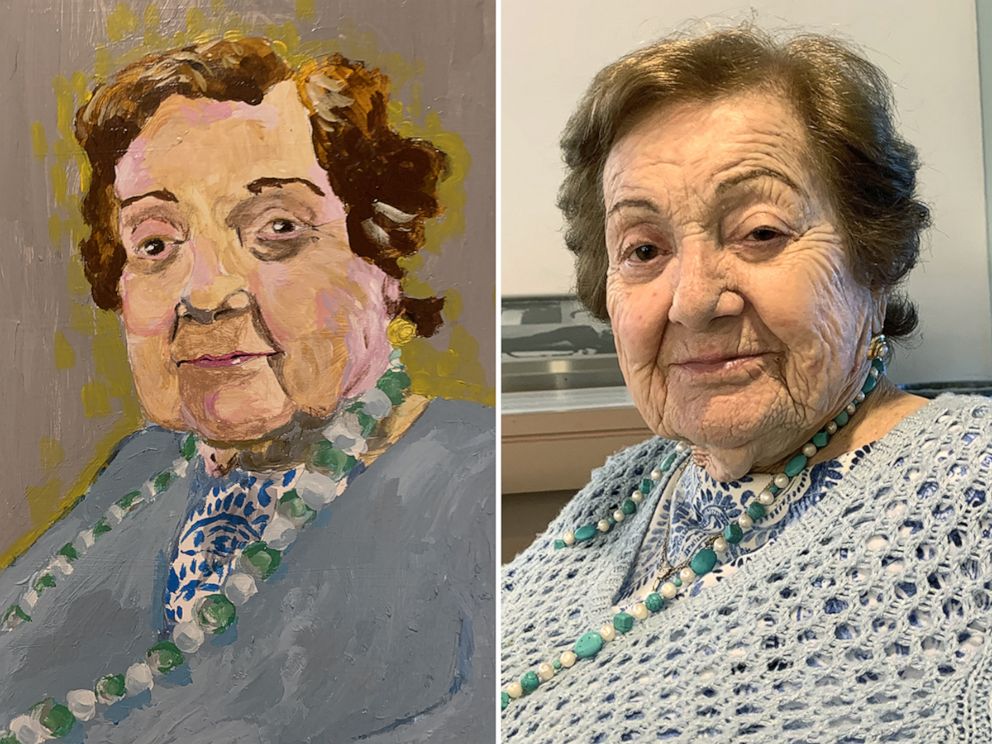 Courtesy Sophia Soll
A portrait of Ella Mandell, painted by Sophia Soll as part of her "Becoming a Witness" exhibition on display at the Museum of Tolerance in Los Angeles.

"To actually know these incredible people as human beings, they are not just learning about history, but they're really learning from history," Samuels said.

"The duality of remembering the past and focusing on the present but with the hopes of building a better future was something that was very motivating for me," she added.

Reflecting on Soll's portraits, Samuels said: "She is taking on this responsibility and this commitment to preserve these stories, to honor these survivors and to become a witness for the future."

Gabriella Karin is a Holocaust survivor who met Soll through her involvement with the Museum of Tolerance. Karin herself is an artist, using the medium of sculpture to depict the Holocaust as she experienced it.

Originally from Bratislava, Slovakia, Karin was hidden by nuns in a convent at the age of 11 before going into complete hiding in an apartment with her parents and five others.

"For nine months, I couldn't speak and I couldn't move around," Karin said. "I was sitting on a chair, and the only thing I could do was to read." 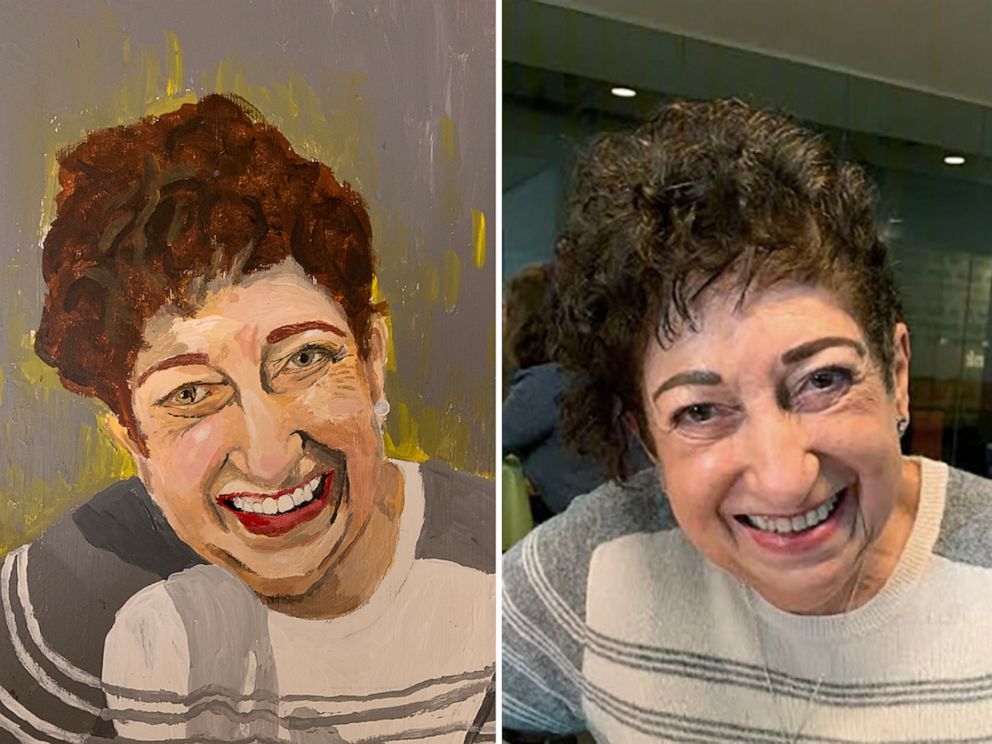 Courtesy Sophia Soll
A portrait of Gabriella Karin, painted by Sophia Soll as part of her "Becoming a Witness" exhibition on display at the Museum of Tolerance in Los Angeles

Often, she read more advanced material because the young man hiding her family didn't want people in the neighborhood to suspect he was smuggling books to a child.

As a young girl, she dove into advanced history books and Tolstoy, and when Slovakia was liberated in 1945, Karin returned to school and skipped a grade. She moved to Israel for 11 years before moving to Los Angeles, and had a long career as a fashion designer before she retired.

Around that time, she went back to school for sculpture, and she started following a libel case in London making headlines: When David Irving sued American professor Deborah Lipstadt and Penguin Books in 2000 for identifying him as a Holocaust denier.

"I got very upset. We are still alive and somebody dares to say it never happened," Karin said. So she started to make sculptures tackling the subject of the Holocaust -- a nun hiding Jewish children in her robe and a family tree with fallen leaves, among others.

MORE: Holocaust survivor reunites with family who saved her through Facebook

"I feel I can educate people, and with that, they might understand what happened," Karin, who turns 90 next month, said. "It's a very hard subject, and it's hard to understand that something like this a human being can do to another." 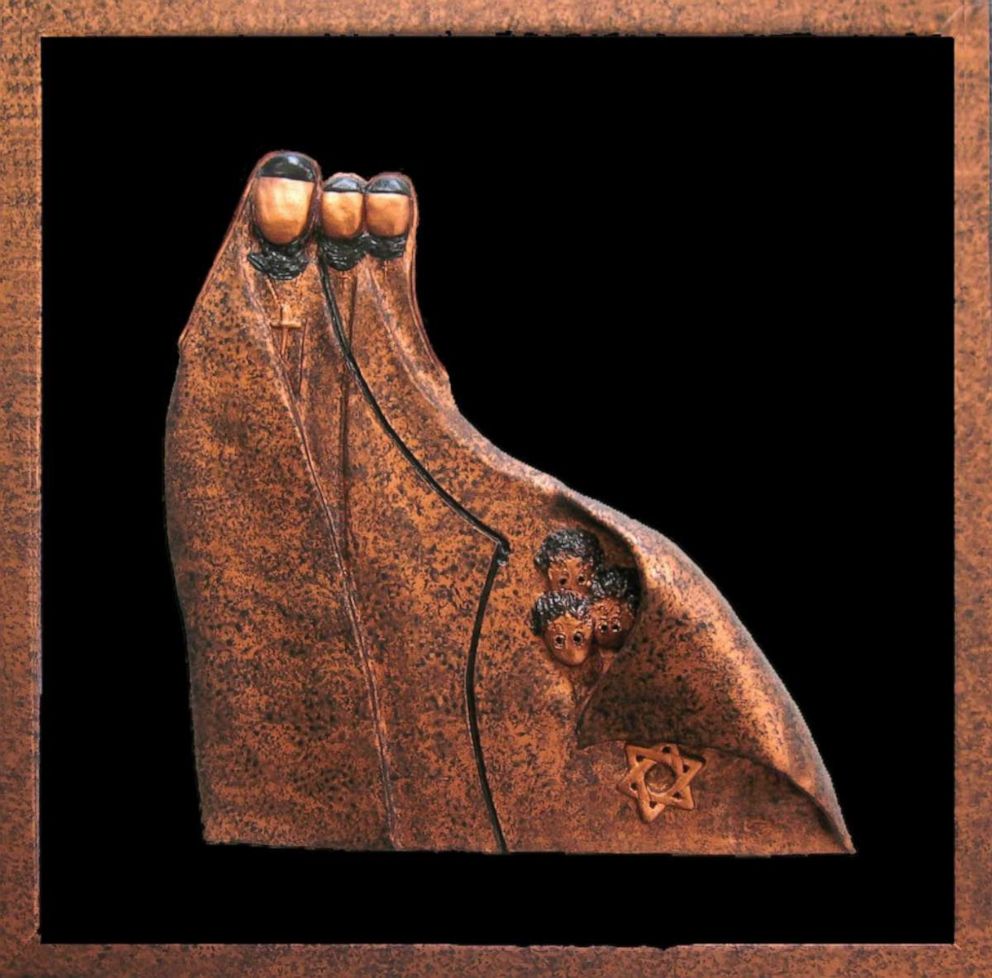 When she first saw the portrait Soll painted of her, she was in shock. People have painted her before, but she says she never recognized herself in the portraits.

"She was the first one I recognized, and it's unbelievable," Karin said.

She said Soll's exhibit reinforces that real people are behind these stories of tragedy and survival.

"It shows more of a feeling instead of a reflection," she said. "A photograph does not show inside. The painting, if it's done well, it does. And that's what she's doing."