For the first time in its over 160-year history, New York City's famous Central Park will have a statue commemorating real-life women.

A statue featuring women's rights pioneers Susan B. Anthony, Sojourner Truth and Elizabeth Cady Stanton, all New Yorkers, will be unveiled on Aug. 26 in the same month that the United States celebrates the 100th anniversary of women gaining the right to vote.

"The honor of being able to do this is profound," said Women's Rights Pioneers Monument sculptor Meredith Bergmann, who was picked for the project from a pool of nearly 100 entries. "It astonishes me and it fills me with pride." 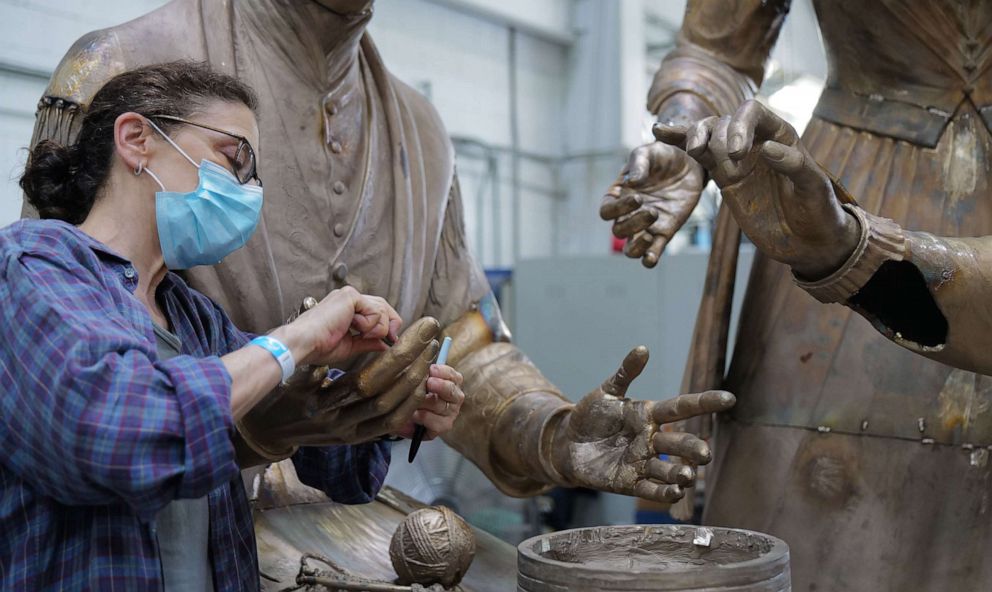 Michael Bergmann/Monumental Women
Sculptor Meredith Bergmann works on her "Women's Rights Pioneers" statue, which will be unveiled as a monument in New York's Central Park on Aug. 26, 2020.

Bergmann, who lived most of her life in New York City and now lives in Connecticut, was commissioned for the project by Monumental Women, an all-volunteer nonprofit made up of women's rights advocates, historians and community leaders.

The organization began its fight to "crack the bronze ceiling" in Central Park nearly seven years ago when leaders decided to change the fact that women were only represented through statues of fictional female characters like Alice in Wonderland, while real-life men are immortalized in nearly two dozen statues in the park. 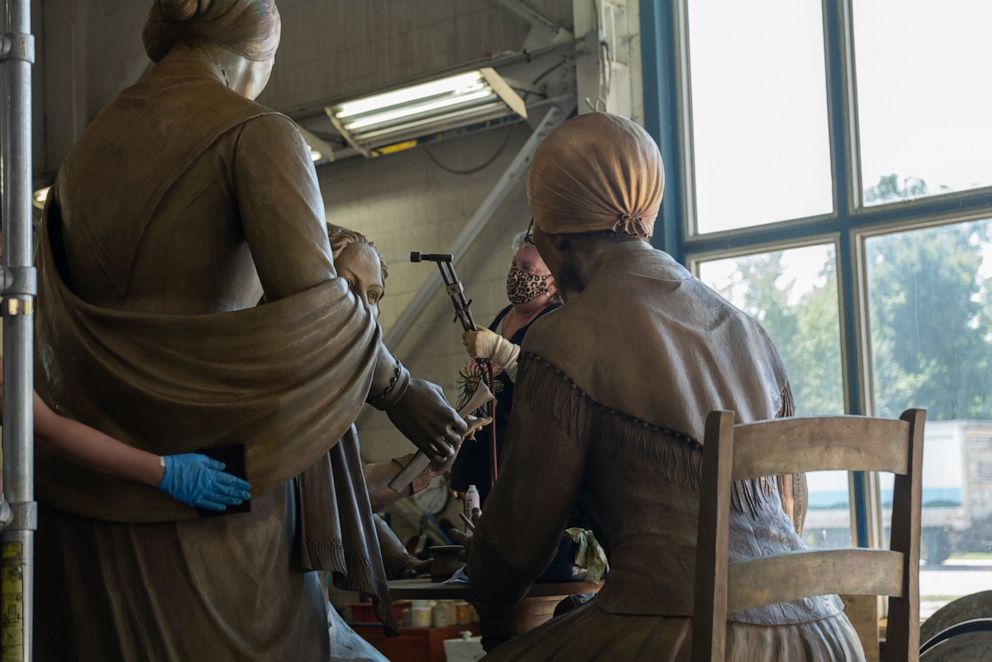 Michael Bergmann/Monumental Women
A statue depicting Sojourner Truth, Susan B. Anthony and Elizabeth Cady will be unveiled as "The Women's Rights Pioneers" monument in New York's Central Park on Aug. 26, 2020.

"The sad thing is that so many people for so many years never even noticed that real women were missing in Central Park, and what does that say about the invisibility of women and the lack of recognition that women face in this country and this world for the hard work that they have done and will always do," said Pam Elam, president of Monumental Women. "We said, 'If the city is not going to do what it should in terms of representing all of the people in its public spaces, then our small, all-volunteer, nonprofit group will step up and do that."

Monumental Women had to fight through paperwork, layers of bureaucracy and doubts that a statue representing real women was needed in the park, including comments like, "Are you sure you want a statue? How about a nice garden?," according to Elam.

The group also had to raise more than $1 million in private funding to make the statue a reality.

They were helped in the effort by Girl Scout troops that donated more than $10,000 in cookie sales, and by New York Life, which donated a $500,000 challenge grant because of its connection to Susan B. Anthony. The women's rights advocate used the cash value of her New York Life insurance policy in 1900 to guarantee admission for the first female students into the University of Rochester, according to New York Life.

Anthony, Truth and Stanton were chosen for the statue because they were "All women who dedicated their lives to fighting for equality and justice and they often shared the same stages and attended the same meetings, so it's only fair that they share the same pedestal," according to Elam. 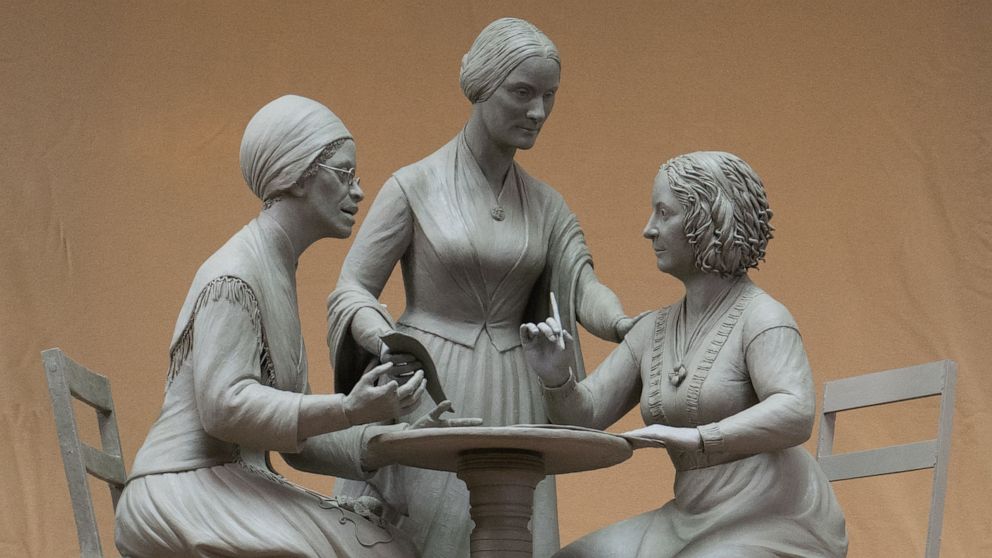 Michael Bergmann/Monumental Women
Women's rights pioneers Sojourner Truth, Susan B. Anthony and Elizabeth Cady Stanton are depicted in the model of a bronze statue which will be unveiled as a monument in New York's Central Park on Aug. 26, 2020.

Bergmann said she hopes the statue of the three women in conversation, which will sit in the Mall in Central Park, inspires people who see it to "lead larger and more valuable lives."

"Although there are three figures, they're not just in place, they're interacting very closely," she said. "They're kind of caught in motion, in conversation, in debate, and it's up to you to decide what they're saying, what they just said, what they're going to say." 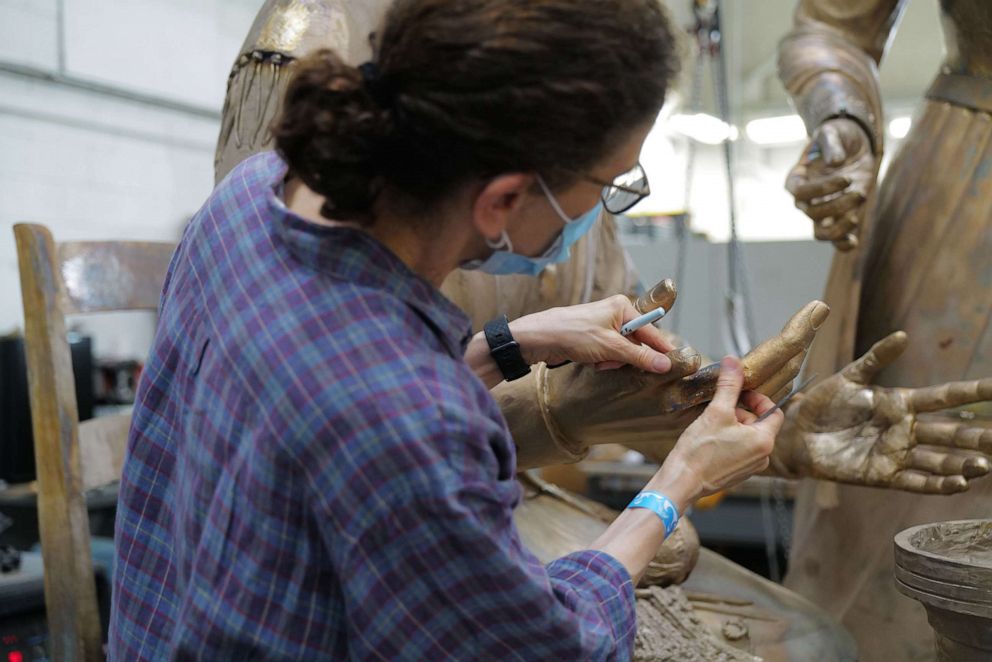 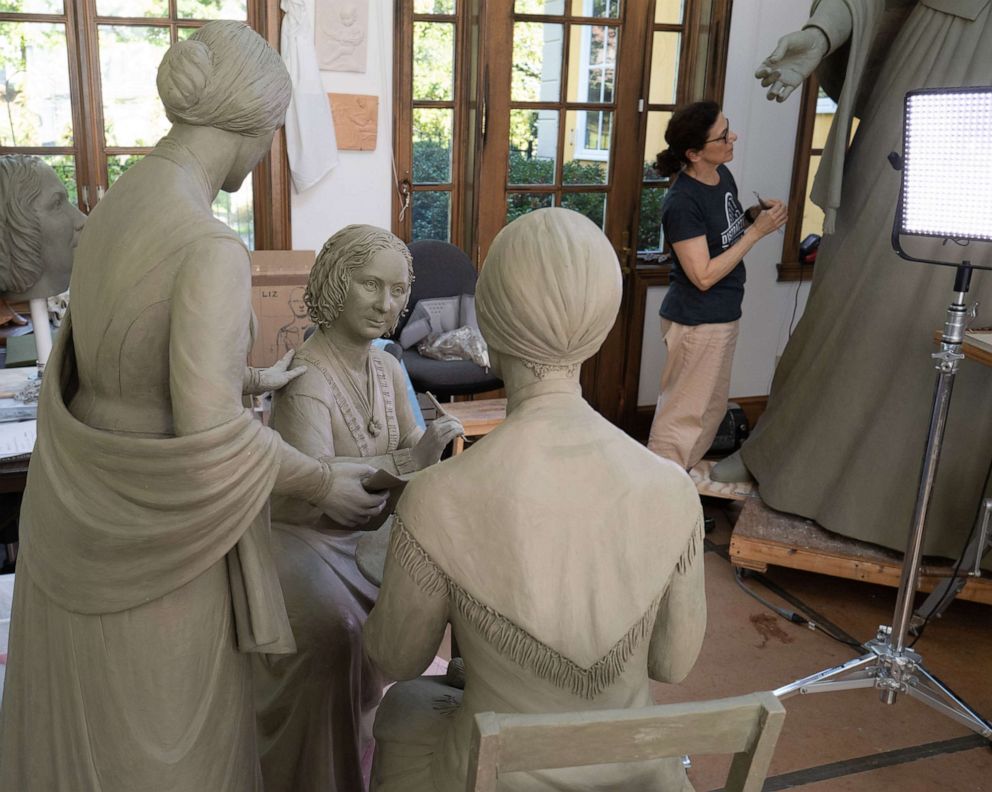 When the statue is unveiled on Aug. 26, Monumental Women plans to also unveil a challenge to cities and towns across the country to "reimagine their public spaces" and include tributes to women and people of color, according to Elam.

She hopes the work Monumental Women did to add a statue in Central Park can be a blueprint for groups in other cities and that the statue itself "energizes" people to "move history forward." 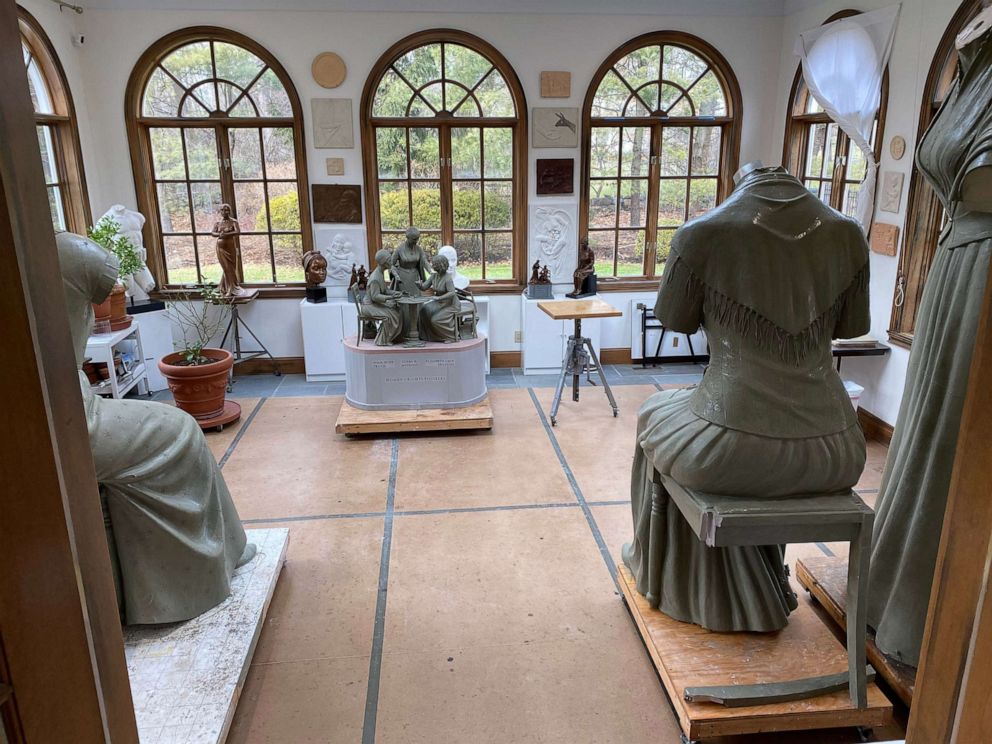 Michael Bergmann/Monumental Women
A statue depicting Sojourner Truth, Susan B. Anthony and Elizabeth Cady will be unveiled as "The Women's Rights Pioneers" monument in New York's Central Park on Aug. 26, 2020.

"We want people to look at this beautiful work of art and feel both inspired and energized to carry on the fight of those women, the fight of all the women who came before us and achieve full equality for women in our lifetimes," said Elam. "We want people to go away with a sense of urgency that we must have a responsibility to move history forward."

To watch a livestream of the Women's Rights Pioneers Monument unveiling on Wednesday, Aug. 26, at 8 a.m. EST, visit MonumentalWomen.org and Monumental Women on Facebook.