When Ed Dentel updated his Apple Watch on Thursday night, he didn't expect it to upend his weekend, much less change his life.

The 46-year-old communications consultant from Richmond, Virginia, does taekwondo with his family three times a week, bikes and skis frequently, and had no history of heart problems.

He said he'd installed the software update with the electrocardiogram app to play around with it.

"The application on the launch sounded off right away with atrial fibrillation -- not something I've ever heard of, but since I'm in pretty decent health and never had a problem before, I didn't give it much thought. I figured something was glitchy, so I set everything down turned in for the night," Dentel told ABC News. 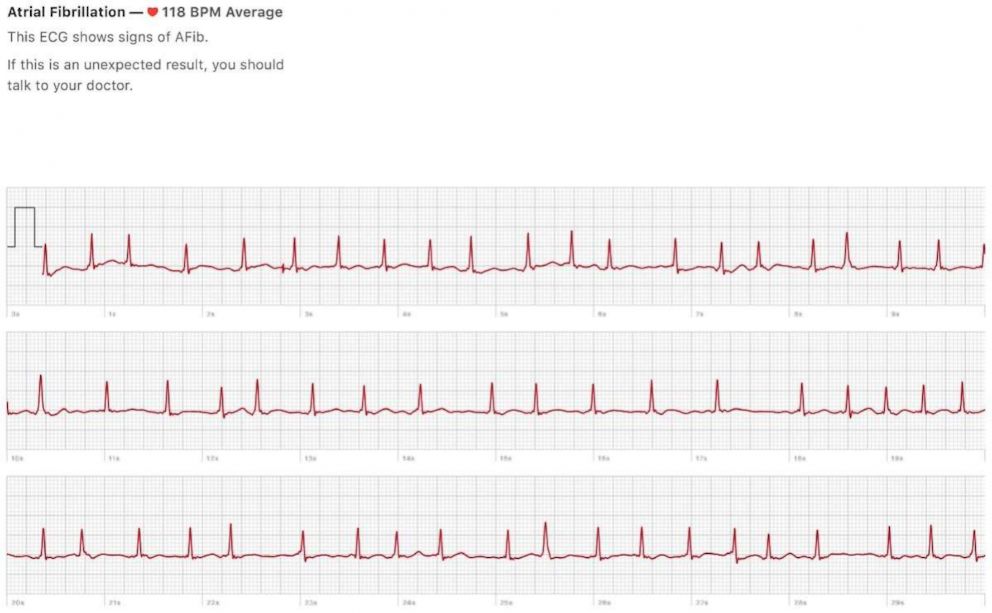 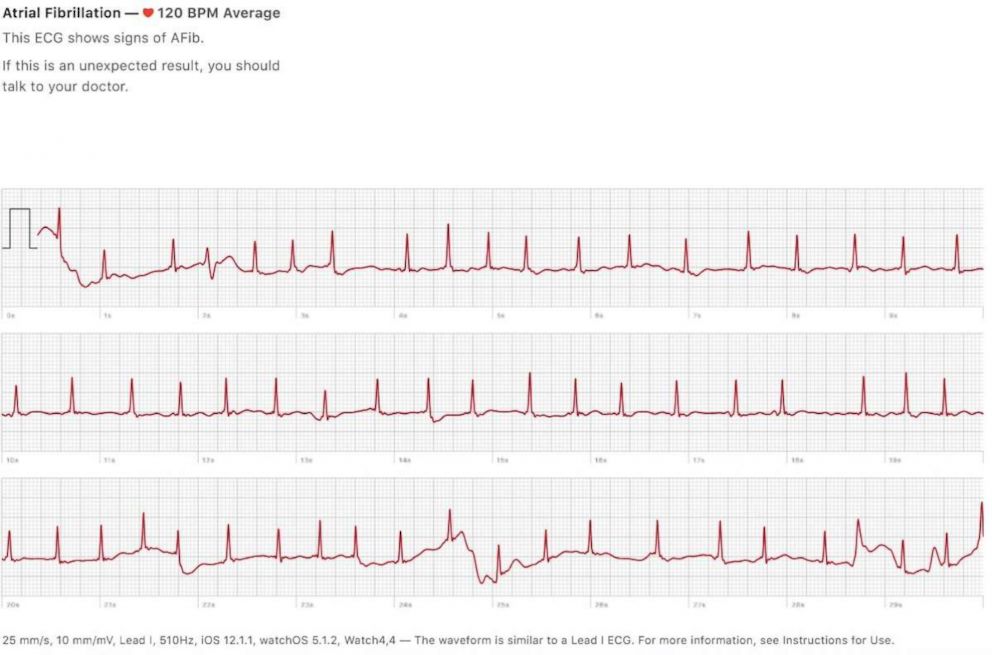 On Friday morning, over breakfast with his 7-year old daughter, he put his watch back on.

Atrial fibrillation, commonly called AFib or AF, is a specific kind of irregular heart rhythm. If left untreated, it can weaken heart muscles and increase the risk of stroke.

Dentel drove to a nearby urgent care center. The parking lot was full, the waiting room was crowded, so he almost left, he said.

"I thought, 'This is silly. I've got meetings, I've got stuff to do. I don't have time to sit here and wait,'" he recalled. "But I looked down and checked the watch one more time, and it says 'AFib.'"

Checking in, Dentel said he felt like a hypochondriac explaining that his watch told him something was wrong. But he was quickly given an EKG by a technician, who called for a doctor, who said, "Yup, you're in AFib. This thing may have just saved your life."

"That's when I started learning about what AFib is and what its impact can be and how important it is to get notice of it really early in your life," Dentel told ABC News. "I talked to the doctor a little bit, and he was trying to decide whether it made sense to do an immediate transfer to a hospital."

Because of his relatively young age and good health, the doctor referred him to a cardiologist for an outpatient visit. After an exam, a review of the EKG and an ultrasound, his diagnosis was confirmed.

"I was dealing with a case of atrial fibrillation that I never knew I had and probably wouldn't have known anytime soon," Dentel said. In fact, earlier this year, he'd had chest pain and was diagnosed with heartburn after an EKG produced normal results. "So just as recently as late spring or early summer, everything was ideal and perfect. Sometime after that ... it kicked off."

The Patient First urgent care facility did not immediately respond to a request for comment from ABC News. Dentel's cardiologist, Dr. Samuel S. Wu, was not immediately available for comment. Apple declined to comment on this story.

What is atrial fibrillation (AFib)?

AFib is the most common kind of irregular heartbeat, according to the American Heart Association's website, which defines it as "the abnormal firing of electrical impulses causes the atria (the top chambers in the heart) to quiver (or fibrillate)."

The most common symptom is a fluttering heartbeat, while others include an abnormally fast heartbeat, fatigue, dizziness or chest pain.

In Dentel's case, he had a rapid and irregular heartbeat, even though he appeared asymptomatic.

"It looks like my heart's a jazz drummer," he said, describing his EKG results. "I can be sitting there, and my heart rate will go from 70 to 90 to 110 and back to 60. When I look at my wife's readout on the watch, it's very nice and even and consistent."

Last week, Dentel's pulse, usually under 70, was 100 to 120, alarming doctors, who considered hospitalizing him. His blood pressure jumped to about 160 over 110. 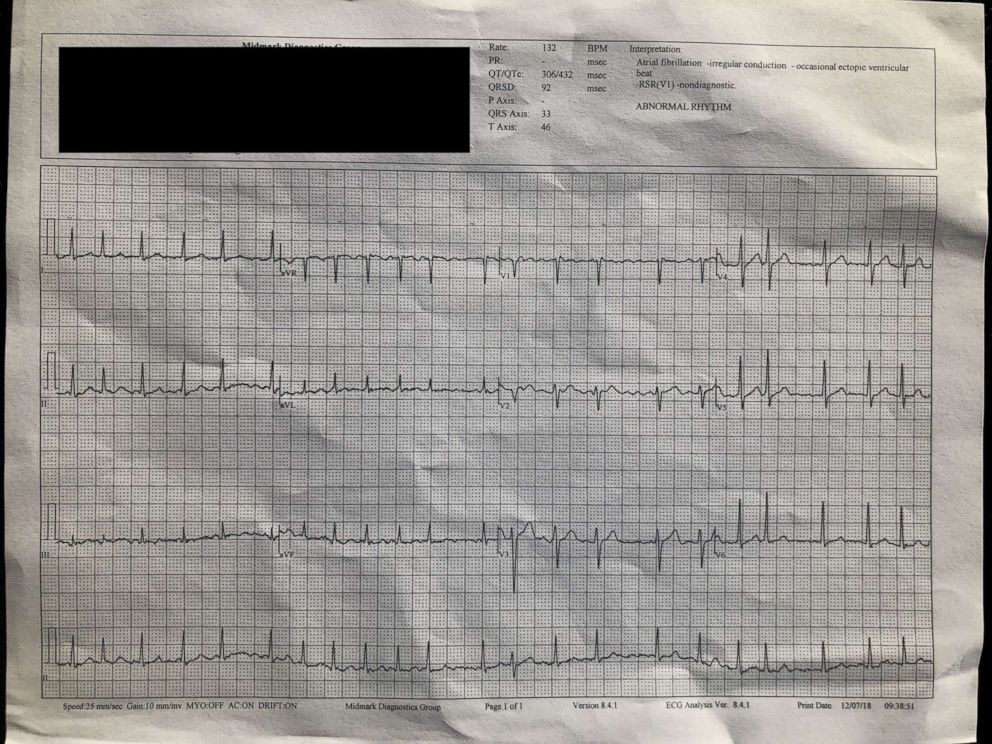 Courtesy Ed Dentel
Ed Dentel's EKG after getting tested following an alert from his Apple watch.

AFib can be linked to smoking, alcohol abuse, high blood, obesity, which don't apply to Dentel, he said. He started medication on Friday and has follow-up appointments this week. 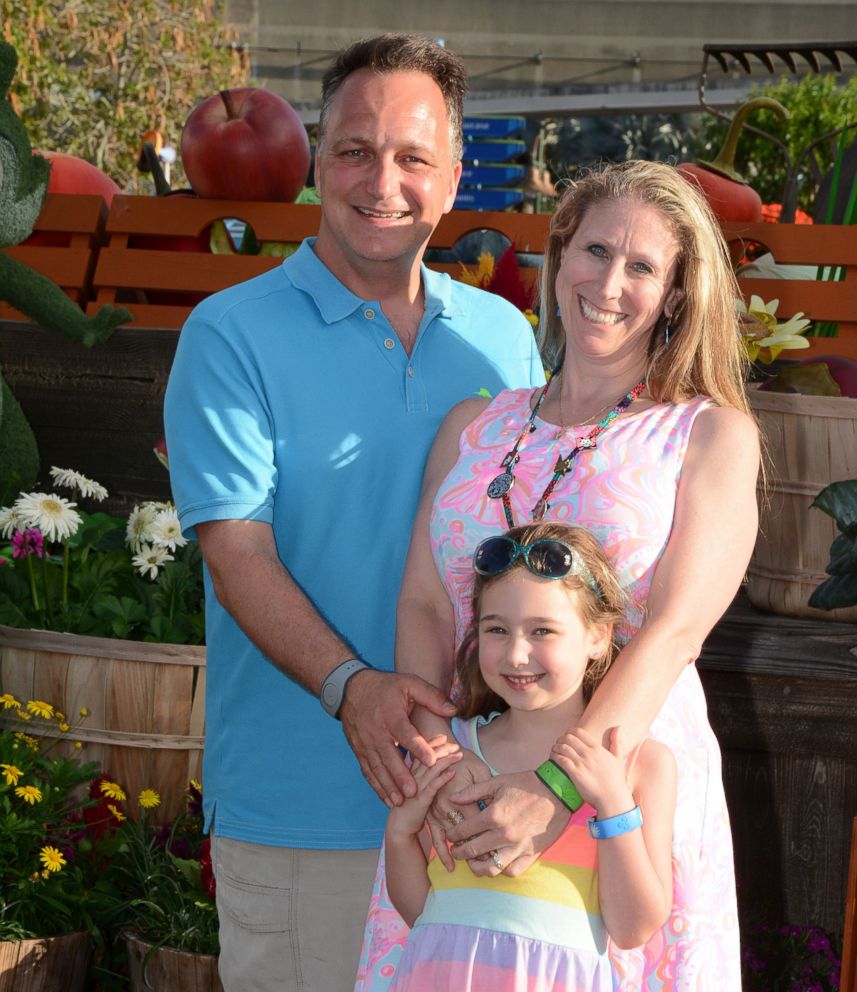 The Apple Watch Series 4 is the latest version of the company's smart watch. With this latest software update, all hardware versions can monitor heartbeats, but the user has to download the software and turn it on in the device's settings. Only the Series 4 can produce the EKGs. None of the devices can tell you if you are having a heart attack. AFib is a precursor to potential blood clots, stroke and heart attack.

Doctors said they're taking a wait-and-see approach with the new Watch.

"It is potentially helpful in these small instances," said Cho, who did not treat Dentel. "The incidence is higher as you get older -- if you had Apple Watches on 80-year-olds, you'd have a high incidence of AFib. If you have mostly 20-, 30- or 40-year-olds, you're not going to see that much."

Cho said he has not spent enough time or reviewed enough data to draw a conclusion about the Apple Watch, but said the fitness trackers do not always have the most reliable information.

"I have patients come in and tell me, 'My heart rate's 100,'" Cho said. "But when you put a more accurate monitor on them, you don't necessarily see the same data. With the Apple watch, we'll see."

"Start Here" is the flagship daily news podcast from ABC News -- a straightforward look at the day's top stories in 20 minutes. Listen for free every weekday on Apple Podcasts, Google Podcasts, iHeartRadio, Spotify, Stitcher, TuneIn, or the ABC News app. On Amazon Echo, ask Alexa to "Play 'Start Here'" or add the "Start Here" skill to your Flash Briefing. Follow @StartHereABC on Twitter, Facebook and Instagram for exclusive content, show updates and more.