Democratic presidential candidate Joe Biden declined to answer questions on the campaign trail this week about his son's overseas business dealings in countries where the then-vice president was conducting diplomatic work, an issue his political opponents have already begun to wield against him as he wades into the 2020 presidential campaign.

More than once, after his father engaged in diplomacy on behalf of the United States in foreign countries, Hunter Biden conducted business in the same country. At two separate campaign stops on Monday, Biden avoided questions about his son while his staff blocked reporters from approaching the candidate.

Biden's campaign did provide ABC News with a statement saying the former vice president has always adhered to "well-established executive branch ethics standards," adding that if Biden wins the White House he will issue an executive order to "address conflicts of interest of any kind."

"This process will be set out in detail in the executive order," the statement reads, "that President Biden would issue on his first day in office."

The ethics pledge follows renewed questions about a pair of overseas business opportunities involving Hunter Biden – one in Ukraine, another in China – that already have begun to generate political attacks from Joe Biden's conservative critics. Ethics experts interviewed by ABC News said these are legitimate questions about possible past and future conflicts of interest. 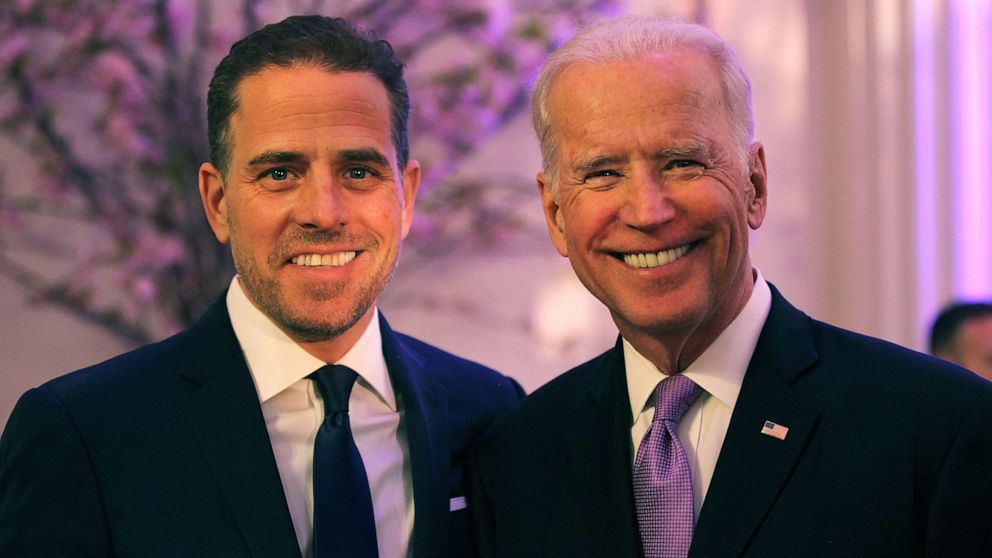 In April of 2014, the then-vice president led a U.S. delegation to Kiev tasked with rooting out corruption and advocating for Ukraine to diminish its reliance on Russian oil. The Obama administration had pledged aid money to support a fledgling Ukrainian administration recovering from a revolution that ousted the country's previous leader.

(MORE: Joe Biden is entering the 2020 field. Here's everything you need to know.)

"You have to fight the cancer of corruption that is endemic in your system right now," Biden told the Ukrainian parliament during the first of several post-revolution visits to the country. "And with the right investments and the right choices, Ukraine can reduce its energy dependence and increase its energy security."

Within weeks of his visit, Ukraine's largest energy producer, Burisma Energy, appointed Hunter Biden to a paid directorship on the firm's board.

Just months before, in December of 2013, there was a similar episode when the then-vice president led an Obama administration effort to tamp down tensions in the Far East. Hunter Biden disembarked from Air Force Two in Beijing alongside his father, ahead of a series of meetings between the vice president and several high-ranking members of China's ruling party. Upon his departure, Joe Biden called Chinese President Xi Jinping a "good friend."

Within weeks of that visit, Hunter Biden was doing business there, as a participant in a firm called Bohai Harvest RST. The corporation formed a novel Chinese-American investment partnership that involved such Chinese state-owned firms as the Bank of China. Reports at the time said they sought to raise $1.5 billion.

In response to questions from ABC News, Hunter Biden maintained that he and his father never talked about his overseas ventures. 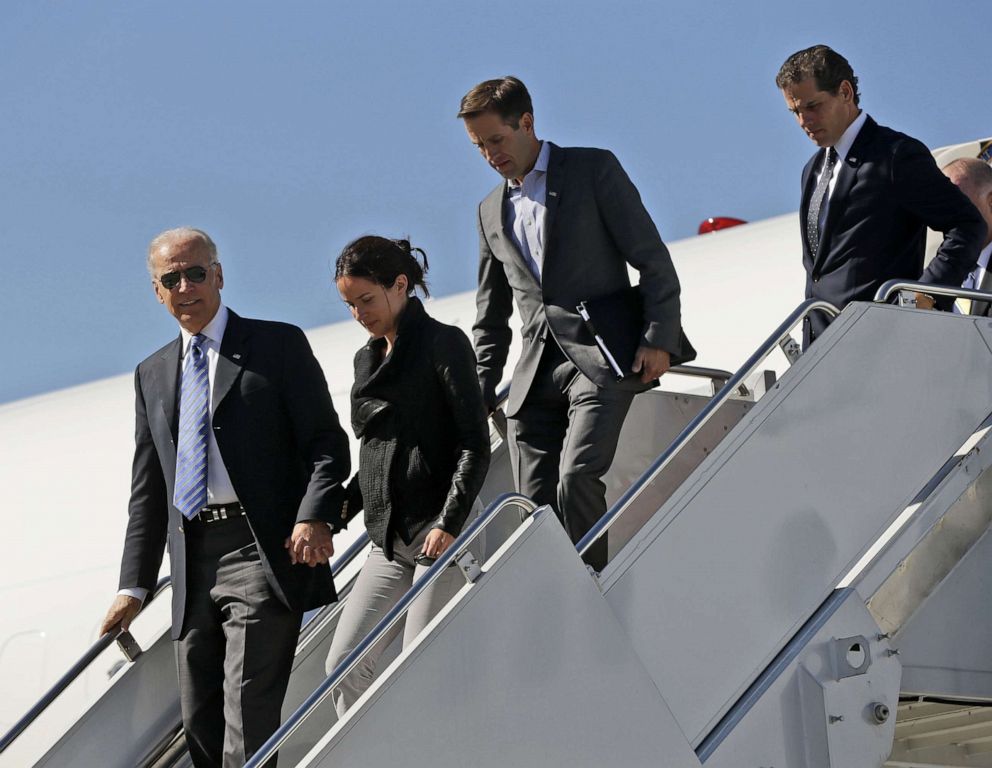 "At no time have I discussed with my father the company's business, or my board service," Hunter Biden said in statement forwarded to ABC News by his attorney. "Any suggestion to the contrary is just plain wrong."

An attorney for Hunter Biden told ABC News the vice president's son merely accompanied his daughter, Finnegan Biden, on the Air Force Two trip to Beijing and conducted no business during the visit.

Robert Weissman, the president of progressive watchdog group Public Citizen and a frequent critic of business dealings by President Donald Trump's children -- including the Trump Organization's ongoing development projects overseas -- told ABC News that it can be challenging for the adult children of well-known political figures to carve out careers that don't pose ethics concerns, but he considers Hunter Biden's decisions concerning.

"At absolute minimum there's a huge appearance of conflict, and there's every reason to think that the investors that he‘s working with want him partnering with them because he's the son of the then-vice president and now presidential candidate," Weissman said. "[Joe Biden] should have encouraged his son to not take these positions."

The Ukrainian energy firm Burisma tapped Hunter Biden -- a Yale-trained attorney who worked at the Manhattan-based law firm Boies Schiller Flexner LLP -- to lead its legal unit and "provide support for the company among international organizations," according to the company's announcement at the time.

Hunter Biden and his associate at a business entity called Rosemont Seneca Partners -- where Hunter Biden was a managing partner -- both obtained board seats, and according to banking records reviewed by ABC News, the firm began collecting $166,666 payments each month. 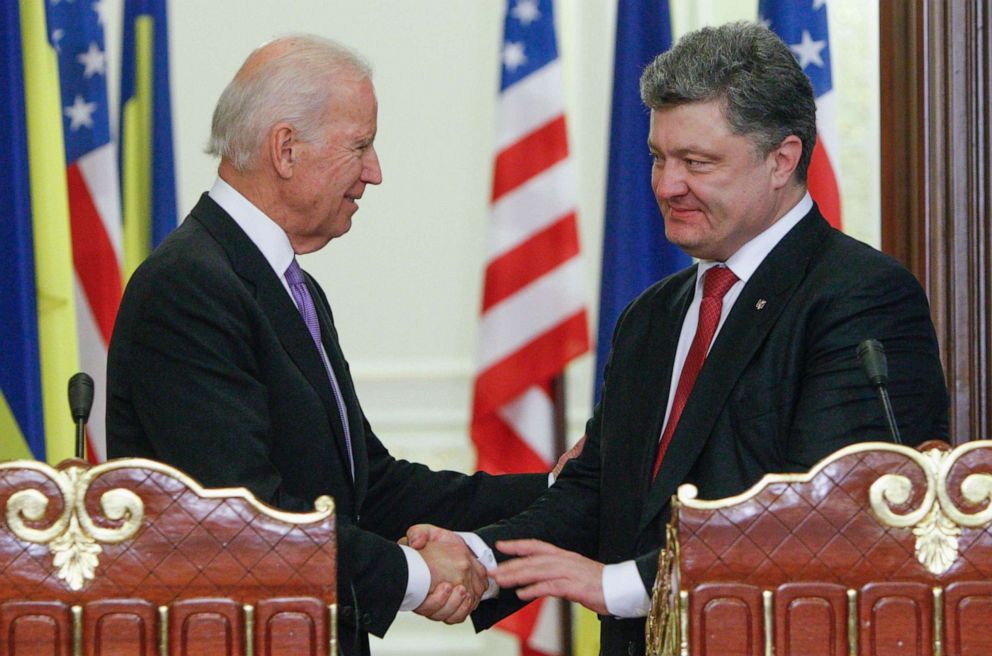 In a statement to ABC News, Biden said "at no time" was he "in charge of the company's legal affairs" and said he "earned [his] qualifications for such a role based on [his] extensive prior board service." Hunter Biden had served on other corporate boards, including as vice chairman of the board overseeing Amtrak. He had no known experience in Ukraine or the highly competitive energy field, but said in his statement that he joined the board "to help reform Burisma's practices of transparency, corporate governance and responsibility."

But questions were raised at the time. Asked about the appointment in May of 2014 by ABC News Chief White House Correspondent Jonathan Karl, then-press secretary Jay Carney responded that "Hunter Biden and other members of the Biden family are obviously private citizens, and where they work does not reflect an endorsement by the administration or by the vice president or president."

More details of his work for Burisma surfaced in the 2018 book "Secret Empires" by conservative author Peter Schweizer, and as Biden moved closer to announcing his bid for the White House, news reports began focusing greater attention on the burgeoning controversy. Reports in The Hill and The New York Times noted that the vice president's reform campaign in Ukraine included an effort to call for the dismissal of Viktor Shokin, then the country's controversial chief prosecutor. The reports noted that Shokin had ostensibly been leading an investigation into Burisma and its founder, Mykola Zlochevsky, for possible financial crimes. 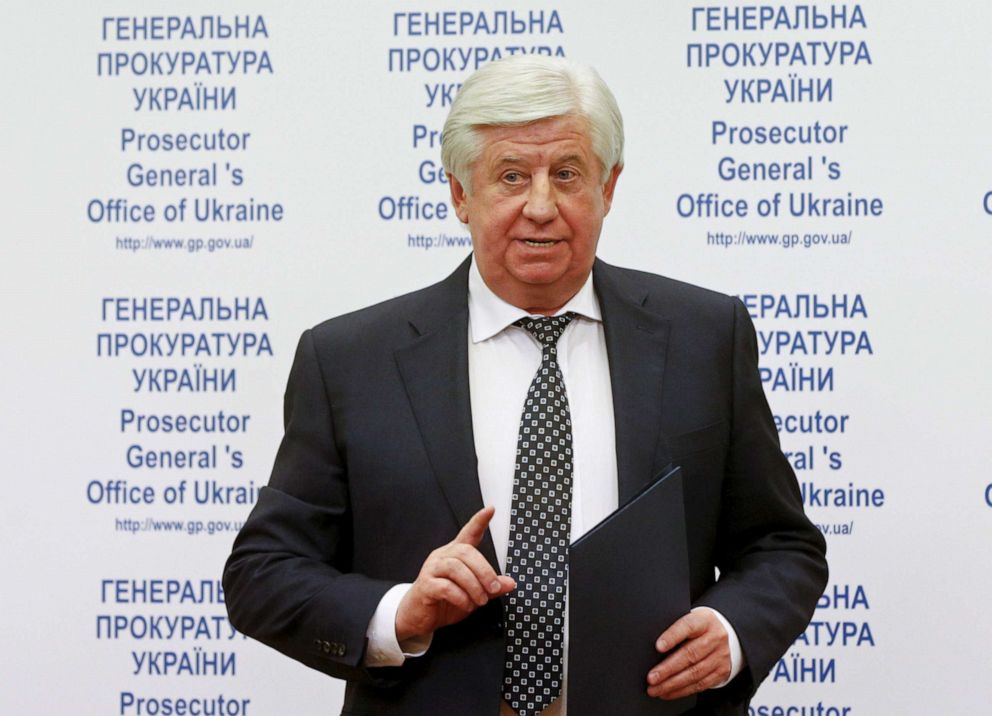 Valentyn Ogirenko/Reuters, FILE
In this file photo, Prosecutor-General of Ukraine Viktor Shokin is shown speaking during a news conference on the arrest of Hennadiy Korban in Kiev, Ukraine, November 2, 2015.

Both Zlochevsky and the company have denied wrongdoing and neither have faced charges, but in an interview with ABC News, Shokin maintained his suspicions about the vice president's motives, accusing Biden of promoting his dismissal for personal reasons. He insisted he had "no doubt" Biden wanted him gone in an effort to protect his son's new employer.

"Biden was acting not like a U.S. vice president, but as an individual," Shokin told ABC News, "like the individual interested in having me removed -- having me gone so that I did not interfere in the Burisma investigation."

A Biden campaign spokesman rejected the premise of Shokin's allegation, saying Biden had "acted at all times in a manner consistent with well-established executive branch ethics standards." And the assertion that Biden acted to help his son has been undercut by widespread criticism of Shokin from several high-profile international leaders who said Biden's recommendation was well justified. Once Shokin was removed, the European Union's envoy to Ukraine, Jan Tombinski, lauded the decision as "an opportunity to make a fresh start."

(MORE: Not appropriate for Trump to talk to AG about investigation into Biden: Schiff)

With Biden emerging as a front-runner for the Democratic presidential nomination, however, Trump has sought to keep the issue in the public eye, aided by personal attorney Rudy Giuliani, who announced last month that he planned to travel to Ukraine to urge officials there to investigate Biden's efforts to lobby for Shokin's ouster.

"Explain to me why Biden shouldn't be investigated," Giuliani tweeted in May, before canceling the trip after facing criticism for appearing to engage a foreign government for political help.

Biden chaffed at Giuliani's efforts when was asked about the matter during a candidate forum in New Hampshire in May. And he defended his son, saying "all the reports indicated that not a single, solitary thing was inappropriate about what my son did. He never talked to me. He never talked to anybody in the administration."

"I give you my word. None," he said, adding that "with all the investigation that's been done, there's not a single piece of evidence that he ever talked to anybody in government about it. … And I have faith in him." 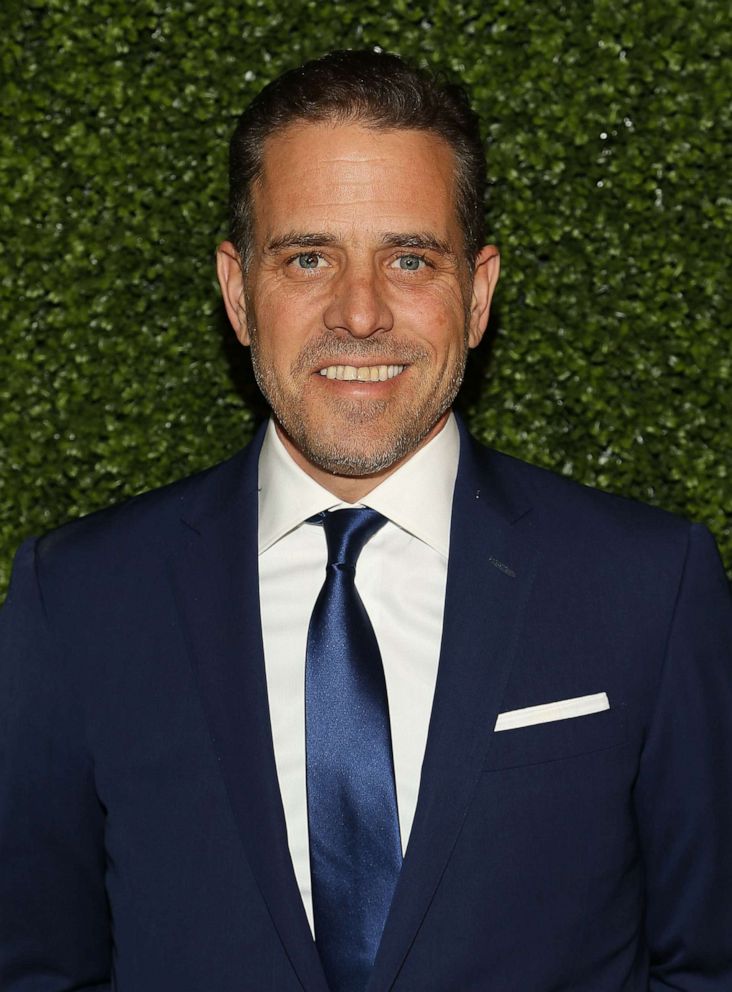 But those assurances have failed to put the issue to rest. Even one of the activists Biden's team asked ABC News to contact had deep reservations about Hunter Biden's decision to accept a board seat at Burisma.

Daria Kaleniuk, a Ukrainian anti-corruption advocate, did not see fault in Joe Biden's conduct, saying she thought he "did what he had to do" in pursuing Shokin's removal, but decried his son's decision as "a very bad thing."

"[Hunter Biden] was very wrong," Kaleniuk said. "He allowed his name to be abused, and with that he made easy money."

Ukraine is not the only foreign territory in which there are lingering questions about business conducted by Hunter Biden.

His exact role in the Chinese investment fund Bohai Harvest RST remains unclear. The firm's website described the venture as being "sponsored" by the government-controlled Bank of China, and securities filings in the U.S. say the fund was "to focus on mergers and acquisitions, and investment in and reforms of state-owned enterprise." 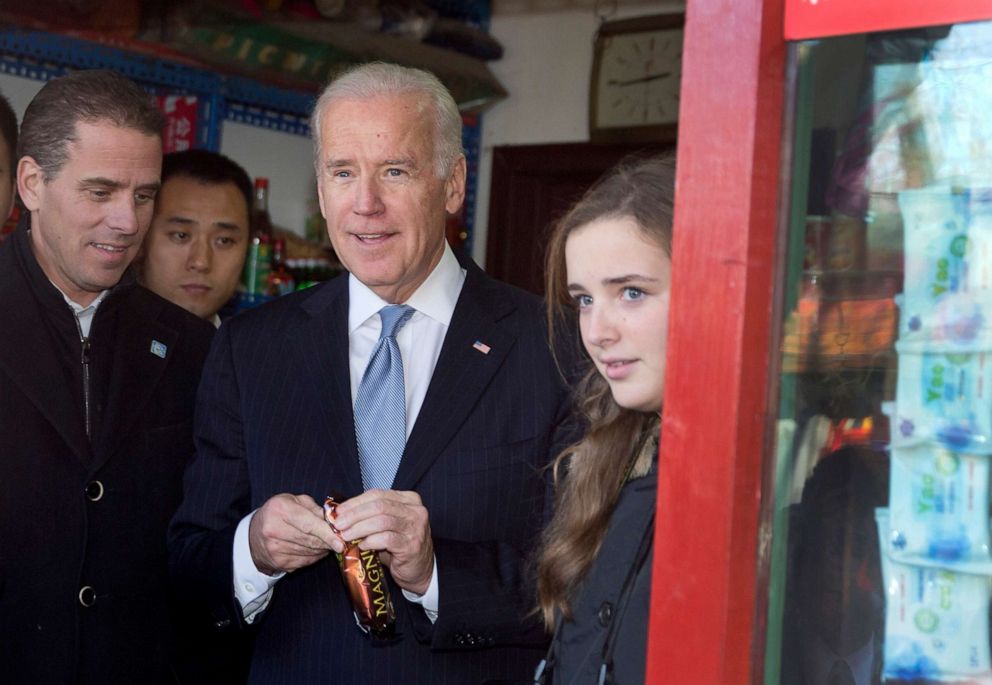 Andy Wong/AP, FILE
In this file photo, Vice President Joe Biden, center, buys an ice-cream at a shop as he tours a Hutong alley with his granddaughter Finnegan Biden, right, and son Hunter Biden, left, in Beijing, China on Dec. 5, 2013.

A source familiar with Hunter Biden's involvement said he served as an unpaid director and has not yet received any returns on his investments from the fund, adding that he only became a minority stake-holder in the company in October 2017, with his current investment estimated at approximately $430,000. He continues to play an active role, according to his attorney. And that presents a problem for ethics experts.

"If Hunter Biden is still connected with [the Chinese investment firm], he needs to get out of that relationship," Weissman, president of Public Citizen, told ABC News. "And there should be as much clarity as possible about what actually is going on there as well."

The timing of that deal has also caught the attention of Trump, who, earlier this month, challenged reporters on the South Lawn: "Biden has some kind of relationship financially -- or his son -- with China? Tell me about that."

In his statement to ABC News, Hunter Biden blamed the negative attention on the political climate.

"The narratives that have been suggested and developed by the right-wing political apparatus are demonstrably false," he said. "These distortions of reality will not distract my father, nor make me question my judgment in my initial decision to join the board of Burisma to do the good work necessary for the benefit of the company and Ukraine."

Hunter Biden said his directorship at Burisma recently expired, and he declined the company's offer to renew it.

"In this political climate," he said, "where my qualifications and work are being attacked by Rudy Giuliani and his minions for transparent political purposes, I have decided not to renew my directorship."