Bob Iger -- the chairman and CEO of The Walt Disney Company -- released his new book, "The Ride of a Lifetime," on Monday.

In his new book, he shares the lessons he’s learned while running Disney and explores the principles necessary for leadership. Iger is donating proceeds from "The Ride of a Lifetime" to educational initiatives aimed at fostering more diversity in the field of journalism.

Read on below for an excerpt from Iger's "The Ride of a Lifetime." 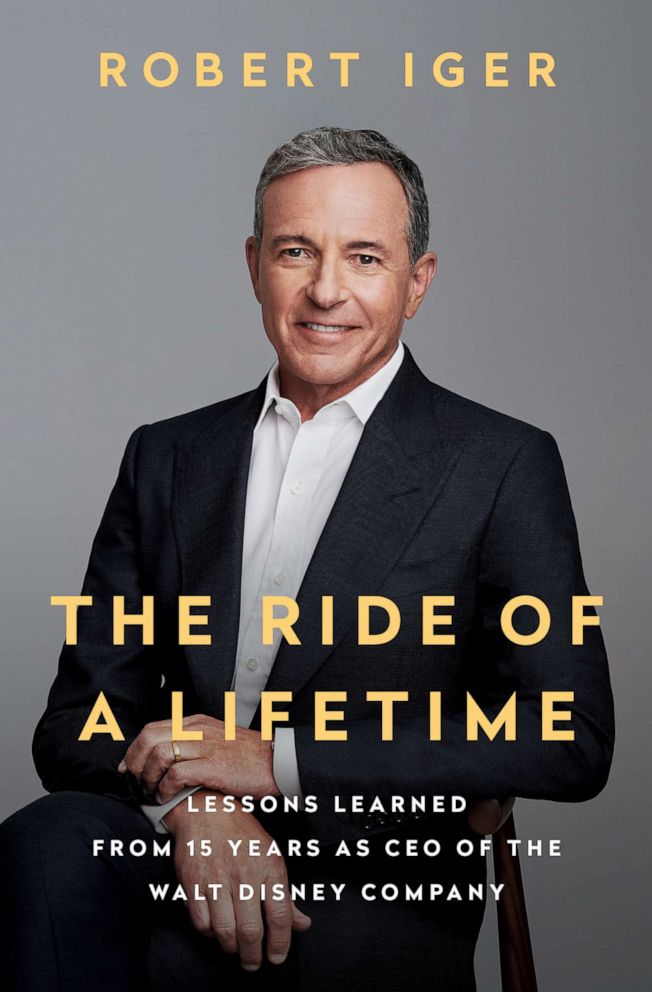 Penguin Random House
The cover of Bob Iger's new book, "The Ride of a Lifetime: Lessons Learned from 15 Years as CEO of The Walt Disney Company."

The challenge for me was: How do I convince the Disney board that I was the change they were looking for without criticizing Michael [Eisner] in the process? There had been some decisions I disagreed with, and I thought the company was in need of change given all the noise, but I respected Michael and was grateful for the opportunities he’d given me. I’d also been COO of the company for five years, and it would have been hypocritical, transparently so, to lay all of the blame on someone else. Mostly, though, it just wouldn’t have been right to make myself look better at Michael’s expense. I vowed to myself not to do that.

I spent a few days after the announcement trying to figure out a way to thread that particular needle— how to talk about the past without implicating myself too much in decisions that weren’t mine, or swinging too far the other way and joining in a pile- on of Michael. The solution to that predicament came from an unexpected place. A week or so after the board’s announcement, I received a phone call from a highly regarded political consultant and brand manager named Scott Miller. Years ago, Scott had done some very useful consulting for ABC, so when he called to say he was in L.A. and asked if he could come see me, I was eager to meet with him.

He arrived in my office a few days later and dropped a ten- page deck in front of me. "This is for you," he said. "It’s free." I asked what it was. "This is our campaign playbook," he said.

"What you’re about to embark on is a political campaign," he said. "You understand that, right?"

In some abstract way, yes, I understood that, but I hadn’t been thinking of it in the literal terms Scott meant. I needed a strategy for getting votes, he said, which meant figuring out who on the board might be persuadable and focusing my message on them. He asked me a series of questions: "Which board members are definitely in your corner?"

"Okay, who’s never going to give you a chance?" Three or four names and faces immediately flashed through my mind. "Now, who are the swing voters?" There were a handful whom I thought I might be able to convince to take a flyer on me. "Those are the ones you have to focus on first," Scott said.

He also understood the bind I was in regarding how I talked about Michael and the past, and he’d already anticipated it. "You cannot win this as an incumbent," he said. "You cannot win on the defensive. It’s only about the future. It’s not about the past."

That may seem obvious, but it came as a revelation to me. I didn’t have to rehash the past. I didn’t have to defend Michael’s decisions. I didn’t have to criticize him for my own benefit. It’s only about the future. Every time a question came up about what had gone wrong at Disney over the past years, what mistakes Michael made, and why they should think I’m any different, my response could simply and honestly be: "I can’t do anything about the past. We can talk about lessons learned, and we can make sure we apply those lessons going forward. But we don’t get any do- overs. You want to know where I’m going to take this company, not where it’s been. Here’s my plan."

"You must think, plan, and act like an insurgent," Scott told me, and your plan should be formed with one clear thought in mind: "This is a battle for the soul of the brand. Talk about the brand, how to grow its value, how to protect it." Then he added, "You’re going to need some strategic priorities." I’d given this considerable thought, and I immediately started ticking off a list. I was five or six in when he shook his head and said, "Stop talking. Once you have that many of them, they’re no longer priorities." Priorities are the few things that you’re going to spend a lot of time and a lot of capital on. Not only do you undermine their significance by having too many, but nobody is going to remember them all. "You’re going to seem unfocused," he said. "You only get three. I can’t tell you what those three should be. We don’t have to figure that out today. You never have to tell me what they are if you don’t want to. But you only get three."

He was right. In my eagerness to demonstrate that I had a strategy for solving all of Disney’s problems and addressing all of the issues we were confronting, I hadn’t prioritized any of them. There was no signaling as to what was most important, no easily digested, comprehensive vision. My overall vision lacked clarity and inspiration.

A company’s culture is shaped by a lot of things, but this is one of the most important— you have to convey your priorities clearly and repeatedly. In my experience, it’s what separates great managers from the rest. If leaders don’t articulate their priorities clearly, then the people around them don’t know what their own priorities should be. Time and energy and capital get wasted. People in your organization suffer unnecessary anxiety because they don’t know what they should be focused on. Inefficiency sets in, frustration builds up, morale sinks.

You can do a lot for the morale of the people around you (and therefore the people around them) just by taking the guesswork out of their day- to- day life. A CEO must provide the company and its senior team with a road map. A lot of work is complex and requires intense amounts of focus and energy, but this kind of messaging is fairly simple: This is where we want to be. This is how we’re going to get there. Once those things are laid out simply, so many decisions become easier to make, and the overall anxiety of an entire organization is lowered.

After the meeting with Scott, I quickly landed on three clear strategic priorities. They have guided the company since the moment I was named CEO:

1. We needed to devote most of our time and capital to the creation of high-quality branded content. In an age when more and more "content" was being created and distributed, we needed to bet on the fact that quality will matter more and more. It wasn’t enough to create lots of content; and it wasn’t even enough to create lots of good content. With an explosion of choice, consumers needed an ability to make decisions about how to spend their time and money. Great brands would become even more powerful tools for guiding consumer behavior.

2. We needed to embrace technology to the fullest extent, first by using it to enable the creation of higher quality products, and then to reach more consumers in more modern, more relevant ways. From the earliest Disney years under Walt, technology was always viewed as a powerful storytelling tool; now it was time to double down on our commitment to doing the same thing. It was also becoming clear that while we were still, and would remain, primarily a content creator, the day would come when modern distribution would be an essential means of maintaining brand relevance. Unless consumers had the ability to consume our content in more user- friendly, more mobile, and more digital ways, our relevance would be challenged. In short, we needed to view technology as more of an opportunity than a threat, and we had to do so with commitment, enthusiasm, and a sense of urgency.

3. We needed to become a truly global company. We were broad with our reach, doing business in numerous markets around the world, but we needed to better penetrate certain markets, particularly the world’s most populous countries, like China and India. If our primary focus was on creating excellent branded content, the next step was to bring that content to a global audience, firmly planting our roots in those markets and creating a strong foundation to grow significantly in scale. To continue to create the same things for the same loyal customers was stagnation.

That was the vision. It was about the future, not the past—and the future was about organizing the entire company’s mission, all of our businesses, and every one of our 130,000 employees at the time, around these three priorities. Now I just needed to convince ten board members, most of whom had little or no faith in me, that this was the right course for the company and I was the right per-son for the job.