WNBA star Brittney Griner said she "would like to plead guilty" Thursday morning on drug charges in a Russian court, saying that the vape cartridges containing hashish oil were in her luggage unintentionally.

Griner said that she was guilty when asked if she would like to give testimony. ABC News was present inside the courtroom during the hearing.

Griner added that she had no "intention" of breaking Russian law, adding that she was is in a rush and did not mean to leave the cartridges in her bag.

Griner is expected to appear in court on July 14 for the third day of her trial.

The WNBA star's trial, which is taking place in Khimki -- a suburb of Moscow -- began last Friday, more than 4 1/2 months after Griner was detained.

Griner, a two-time Olympic gold medalist, was visiting Russia to play basketball in the off-season when she was detained at Sheremetyevo International Airport on Feb. 17 after being accused of having vape cartridges containing hashish oil, which is illegal in the country.

Her legal team told ABC News in a statement on Thursday that her "guilty" plea was informed by a discussion with her Russian attorneys.

"Brittney sets an example of being brave. She decided to take full responsibility for her actions as she knows that she is a role model for many people," they said in the statement. "Considering the nature of her case, the insignificant amount of the substance and BG’s personality and history of positive contributions to global and Russian sport, the defense hopes that the plea will be considered by the court as a mitigating factor and there will be no severe sentence.”

Griner's detention was extended repeatedly, most recently through Dec. 20, which was the expected length of her trial. If convicted, Griner, 31, faces up to 10 years in prison and also has a right to an appeal.

The U.S. government classified Griner's case on May 3 as "wrongfully detained," meaning the U.S. will more aggressively work to negotiate her release even as the legal case against her plays out, the State Department has said.

White House press secretary Karine Jean-Pierre said on Thursday that Griner’s guilty plea will have “no impact” on any of the negotiations to bring her home to the U.S.

“We’re going to do everything that we can to bring home Brittney Griner safely, and to also make sure that we bring Paul Whelan back home as well," Jean-Pierre said.

Following Griner's appearance in Russian court on Thursday, the U.S.' National Security Council spokesperson Adrienne Watson maintained in a statement that Griner is "wrongfully detained" and being held "under intolerable circumstances."

"At the President’s direction, the U.S. government continues to work aggressively, pursuing every avenue, to bring her home safely to her family, friends, and loved ones as soon as possible," Watson said.

"We will continue that work to secure Brittney’s release, as well as the release of Paul Whelan and other U.S. nationals who are wrongfully detained or held hostage in Russia and around the world," she added.

Representatives of the U.S. Embassy, as well as two representatives from Russian and foreign media, were allowed into the courtroom.

Secretary of State Antony Blinken said in a tweet on Thursday that the U.S. officials who attended the trial delivered a letter to Griner from President Joe Biden in response to a letter that the WNBA star wrote to the president earlier this week asking for his help.

"We will not relent until Brittney, Paul Whelan, and all other wrongfully detained Americans are reunited with their loved ones," Blinken wrote.

"The president called Cherelle to reassure her that he is working to secure Brittney's release as soon as possible, as well as the release of Paul Whelan and other U.S. nationals who are wrongfully detained or held hostage in Russia and around the world," the White House said in a statement released Wednesday. 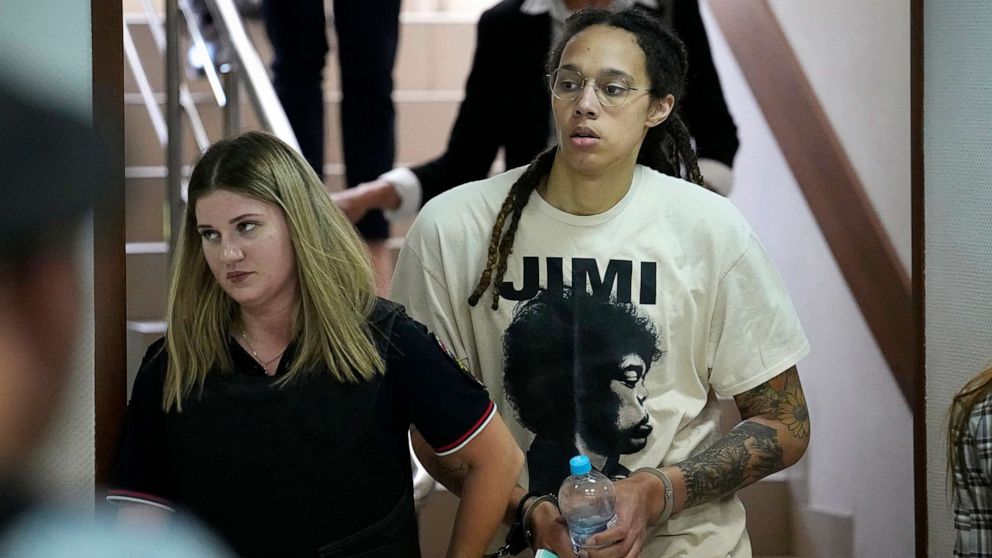 Alexander Zemlianichenko/AP
WNBA star and two-time Olympic gold medalist Brittney Griner is escorted to a courtroom for a hearing, in Khimki just outside Moscow, July 1, 2022.

The call came months after Cherelle Griner publicly expressed interest in speaking with Biden about her wife's case in a May interview with "Good Morning America" co-anchor Robin Roberts.

"I just keep hearing that, you know, he has the power. She's a political pawn," Cherelle Griner said in May. "So if they're holding her because they want you to do something, then I want you to do it."

The first witness at Griner's trial last Friday was a customs officer who was at the airport when she was arrested. A second unidentified witness was also questioned by prosecutors behind closed doors, according to The Associated Press. Meanwhile, two others failed to appear, so the trial was adjourned for the day.

Griner's attorney, Alexander Boykov, declined to comment "on the specifics of the case and on the charges," telling reporters outside the courtroom last Friday that it was too early to do so, according to The AP.

Russia's invasion of Ukraine began one week after Griner was detained. Some officials are concerned that Americans jailed in Russia could be used as leverage in the ongoing conflict.

Griner, who plays for the Phoenix Mercury, personally reached out to Biden in a handwritten letter that the White House received on Monday, urging the president to help her get out of Russia.

"As I sit here in a Russian prison, alone with my thoughts and without the protection of my wife, family, friends, Olympic jersey or any accomplishments, I'm terrified I might be here forever," Griner wrote to the president.

"It hurts thinking about how I usually celebrate [the Fourth of July] because freedom means something completely different to me this year," she added.

Biden shared a draft of the letter her wrote to Birttney Griner with Cherelle Griner during their call, according to the White House.

Cherelle Griner said in a message posted to her Instagram account on Wednesday that she was "grateful" for the call she received from Biden and Harris and vowed to keep speaking out until her wife is back home.

"While I will remain concerned and outspoken until she is back home, I am hopeful in knowing that the President read my wife’s letter and took the time to respond. I know BG will be able to find comfort in knowing she has not been forgotten. I want to thank everyone who has fought so hard for BG. It means the world to my entire family as well as my wife," she wrote.

Jean-Pierre told ABC’s Rachel Scott that Biden was “deeply moved” by Griner’s letter to him this week, but still wouldn’t say what the president wrote in his response letter.

Calls to free Brittney Griner escalated following the release of U.S. Marine veteran Trevor Reed last month, who was freed from a Russian prison as part of a prisoner exchange. Former Marine Paul Whelan has also been detained in Russia since 2019.

Reed's family met with Biden after they protested outside the White House, but Whelan's has yet to meet or speak directly with Biden despite their outreach.

Asked by ABC News how the White House can assure Whelan's family that he is not forgotten, Jean-Pierre said, the administration wants to "assure" the Whelan and Griner families that Biden will use "every means that we have" to bring them home.

"Clearly, we cannot negotiate in public. That is not something that we’re going to do. But, we’re committed to making sure they all get home safely," she said.