President Joe Biden's top COVID officials are set to testify before Congress on Tuesday as guidance on masks is splintering at the local level -- with some cities and medical organizations recommending a return to universal mask wearing, despite federal guidance that vaccinated Americans can go without masks.

Dr. Anthony Fauci, chief White House medical adviser, said Monday that it was "reasonable" for a leading group of pediatricians to push back against federal guidance that vaccinated Americans can go without masks.

"The CDC always leaves open the flexibility at the part of local agencies, local enterprises, local cities and states to make a judgment call based on the situation on the ground. So, I think that the America Academy of Pediatrics -- they're a thoughtful group, they analyze the situation -- and if they feel that is the way to go, I think that is a reasonable thing to do," Fauci said in an interview with CNN after the AAP's guidance came out. 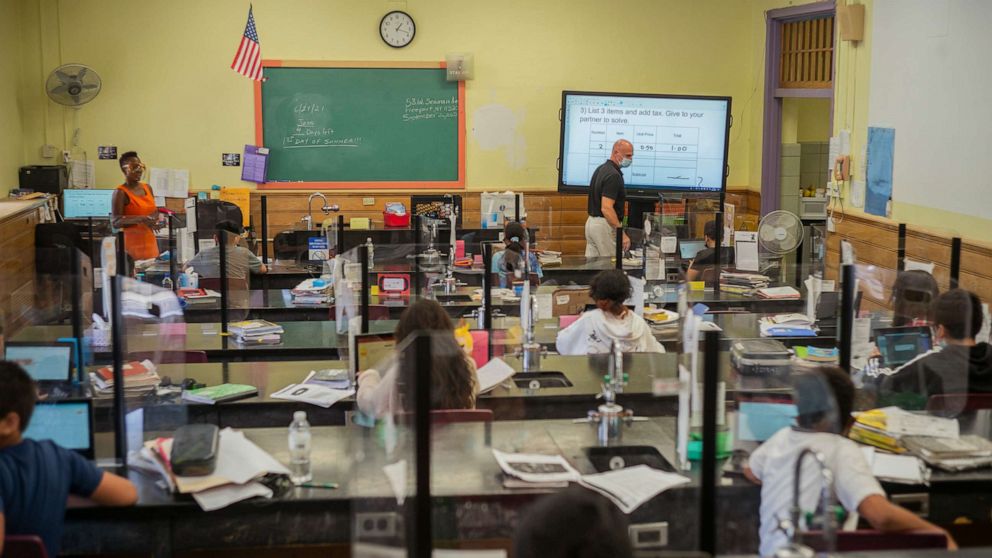 The group on Monday called for schools to enforce universal masking mandates because so many children won't be protected by fall and schools have no way of verifying COVID vaccine status yet. The AAP warned that the honor system has failed to keep many people safe in the face of the delta variant.

"AAP recommends universal masking because a significant portion of the student population is not yet eligible for vaccines, and masking is proven to reduce transmission of the virus and to protect those who are not vaccinated," the AAP wrote in it's Monday statement. "Many schools will not have a system to monitor vaccine status of students, teachers and staff, and some communities overall have low vaccination uptake where the virus may be circulating more prominently."

People who are fully vaccinated -- a term used to describe a person two weeks after their last shot -- are still considered safe from serious illness or death, even if they are exposed to the delta variant. The Centers for Disease Control and Prevention reports that 99.5% of hospitalizations are people who weren't immunized.

Because vaccinated people are considered to be safe, the CDC has said immunized adults and teens can go without a mask, including inside schools.

Mary Altaffer/AP
Fifth graders wearing face masks are seated at proper social distancing during a music class at the Milton Elementary School in Rye, N.Y., May 18, 2021.

While CDC Director Rochelle Walensky didn't directly respond to the AAP's guidance on Monday, she spoke on a panel that afternoon and urged parents to vaccinate their children -- a solution that grants children full protection from the virus but that hasn't been accepted as eagerly by parents who are nervous to give their kids the vaccine.

"Being vaccinated will allow our kids to safely get back to the things they have missed -- in-person school, playing with friends and participating in sports activities," Walensky said at the panel on Monday.

But Walensky also argued that it could protect kids' lives.

"Vaccinating our children is more than just a way of getting them safely back at school. It's a way to save lives," she said, citing the 489 pediatric deaths from COVID-19 and other risks to children who survive the disease, like longterm symptoms and multisystem inflammatories syndrome, "a rare but serious complication which is affected over 4,000 children in the United States, leading to more than 37 pediatric deaths," she said.

The public health agency has noted, however, that local officials should still decide to enforce mask mandates if COVID cases climb and vaccination numbers are low. And the CDC said that schools can still embrace universal masking if they can't verify vaccinations or have large numbers of students too young to qualify.

MORE: Statistics show the stark risks of not getting vaccinated against COVID-19

"In areas where there are low numbers of vaccinated people, where cases are rising, it's very reasonable for counties to take more mitigation measures," like the mask rule in Los Angeles, Biden's surgeon general, Vivek Murthy, told ABC "This Week" co-anchor Martha Raddatz on Sunday.

"And I anticipate that will happen in other parts of the country -- and that's not contradictory to the guidance the CDC issued," he added.

“I am deeply concerned.” @Surgeon_General Dr. Vivek Murthy tells @MarthaRaddatz there isn’t enough focus on children under 12 who aren’t eligible to get COVID-19 vaccine, saying “our kids depend on us.” https://t.co/olvJwHkSwd pic.twitter.com/8vkaszRL6J

Fauci, too, noted that guidance will have to be tailored to specific groups, whether that's Los Angeles or school children, because the CDC's guidance is broad and relies on data that isn't always immediately available.

"That is an understandable, human reaction to really want to be more safe rather than sorry. And I believe that is the reason why they're doing that," he said, speaking about the American Academy of Pediatrics' guidance for school children. 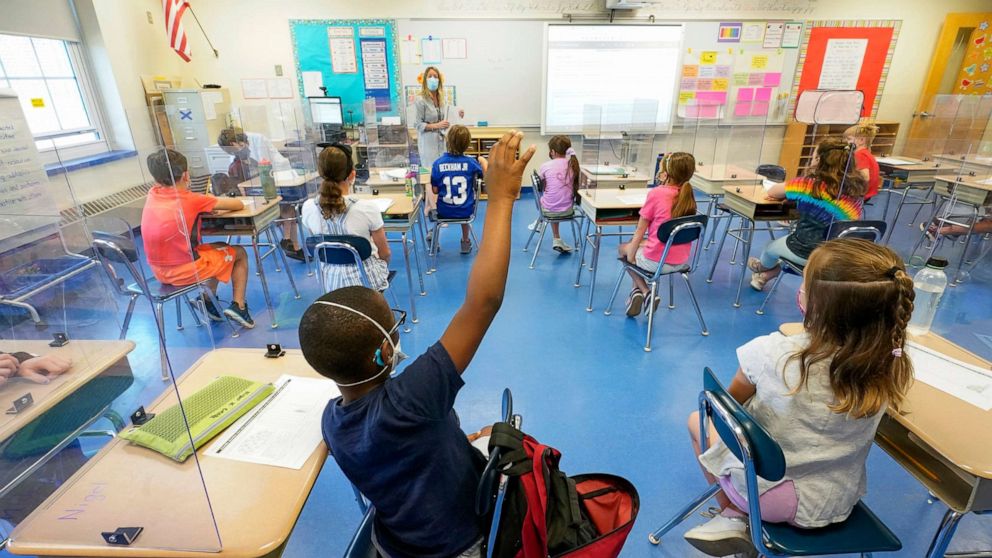 Mary Altaffer/AP, FILE
In this May 18, 2021, file photo, a teacher, center, and her third grade students wear face masks and are seated at proper social distancing spacing during as she conducts her class in Rye, N.Y.

But Fauci also acknowledged that it created confusion to have different guidance for various settings.

"That does lead to some sort of confusion sometimes when people see an organization making one recommendation, in general, for the whole country, and then local groups, local enterprises, local organizations, in order to get that extra step of safety, say something different. And you're right, that does indeed cause a bit of confusion," he said on CNN Monday.

And it's this approach -- allowing states and local communities to decide and essentially putting Americans on the honor system -- that's in question after COVID cases have risen in nearly every state.

Dr. Jerome Adams, who was surgeon general under President Donald Trump, said he made a mistake early on in the pandemic urging people not to mask up because he feared a shortage of masks for health care workers. Adams said he's afraid the CDC is making another mistake now by not putting more pressure on everyone to wear a mask.

"Instead of vax it OR mask it, the emerging data suggests CDC should be advising to vax it AND mask it in areas with cases and positivity- until we see numbers going back down again," Adams tweeted.

"CDC was well intended, but the message was misinterpreted, premature, & wrong. Let's fix it," he added.

Instead of vax it OR mask it, the emerging data suggests CDC should be advising to vax it AND mask it in areas with ⬆️ cases and positivity- until we see numbers going back down again.

CDC was well intended, but the message was misinterpreted, premature, & wrong. Let's fix it.

The Biden administration though is in a tough spot. The CDC had been under extraordinary pressure earlier this year to show skeptical Americans the benefits of vaccination, including being able to go without a mask and not having to quarantine after being exposed.

And so far, number studies have shown that all three vaccines – Johnson & Johnson, Pfizer and Moderna – protect people against all known variants. The vaccines also are shown to provide more durable protection than a natural infection.

Also, any federal mandate for vaccines or masks would no doubt trigger a swift backlash among conservatives.

Responding to the former surgeon general calling on CDC to bring back masks, conservative firebrand Sen. Ted Cruz of Texas tweeted: "No. No. No. Hell no."

For his part, President Joe Biden has suggested in recent remarks that he's worried about the science of the vaccinations and masks, only the people who were choosing to ignore it.

"Look, the only pandemic we have is among the unvaccinated," said Biden Friday.

And in a speech on Monday, he said, "Virtually all hospitalizations and deaths are occurring among unvaccinated Americans. These tragedies are avoidable. ... If you're unvaccinated, you are not protected."

"Virtually all hospitalizations and deaths are occurring among unvaccinated Americans. These tragedies are avoidable...If you're unvaccinated, you are not protected," Pres. Biden says about COVID-19 pandemic. https://t.co/8JyOjQH4pX pic.twitter.com/upOT1Anv5L