A rise in hepatitis cases among children is under investigation by experts.

Some recent reports from the U.S., U.K., and EU health organizations including the U.S. Centers for Disease Control and Prevention, show that some children between 11 months and 13 years old have been diagnosed with hepatitis.

The exact cause is still unknown, experts say.

Hepatitis is a characterized by liver inflammation and damage. It can sometimes be caused by a virus, but sometimes caused by other factors, such as toxins or medications.

Pediatric hepatitis cases were first reported in the U.K. with 10 cases report on April 5, according to the World Health Organization. However, WHO's report from April 15 showed there were 108 cases across the U.K. in the following days.

On Tuesday, the European Centre for Disease Prevention and Control announced in a statement that there were more cases in Denmark, Ireland, the Netherlands and Spain.

Meanwhile, in the U.S., nine cases of acute hepatitis were in children between 1 and 6 years old in Alabama, according to the U.S. CDC. In a statement on April 21, the CDC asked clinicians to be on the lookout for symptoms and to report any suspected cases of hepatitis of unknown origin to their local and state health departments. 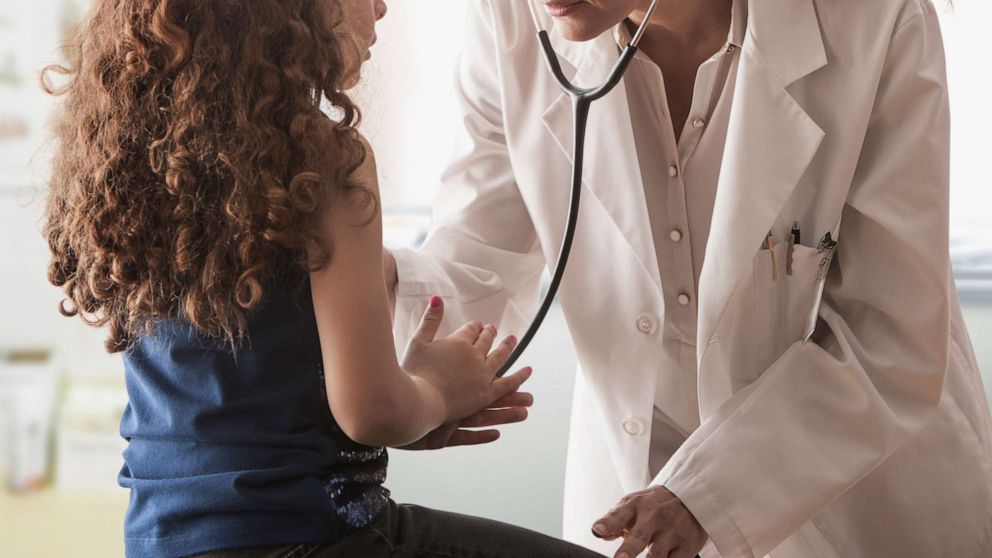 STOCK PHOTO/Getty Images
A Dr. examines a child in this undated stock photo.

While mild hepatitis is common in children, "severe inflammation of the liver in these children is a big concern," Graham Cooke, professor of infectious diseases at Imperial College London told ABC News.

According to WHO's report, some cases required transfer to specialists and six children have undergone liver transplantation.

"Six patients requiring a liver transplantation in such a short period is a big number," Cooke said.

Cooke said the child hepatitis cases are "distributed widely across the UK,. with a higher density in UK's northwest.

"But there is no information whether the cases are linked or if the disease is a contagious one," he added.

There is no indication the cases are linked to COVID-19 vaccines. In fact, "None of the currently confirmed cases in the UK has been vaccinated" against COVID-19, according to a UKHSA report.

Hepatitis is often caused by viral infections, most commonly hepatitis viruses. , But laboratory testing has excluded hepatitis virus types A, B, C and E in the U.K. children.

"However, there are different causes that may lead to liver inflammation. The cause of this specific outbreak is not of the ones known and it may some take time until the real case is discovered," he added.

"Of the confirmed cases, 49 are in England, 13 are in Scotland and the remainder are in Wales and Northern Ireland," the U.K. Health Security Agency wrote in its updated report on April 21.

"As of 11 April, no death has been reported among these cases and one epidemiologically linked case has been detected," the report added.

International teams are working to investigate the matter, Cooke said.

According to the UKHSA report: 'adenoviruses' are one of several potential causes under investigation.

The UKHSA's update on its investigation, including information from patient samples and surveillance systems, continues to point toward "a link to adenovirus infection."

Adenoviruses are commonly spread through the respiratory route, from person to person, and by touching contaminated surfaces. UKHSA advises the most effective way to minimize the spread of adenoviruses is to practice good hand and respiratory hygiene and supervise thorough handwashing in younger children.

However, other possible causes are also being actively investigated, including COVID-19, other infections or environmental causes