China is facing its worst COVID crisis since early 2020, when the world first witnessed an entire population locked down to contain the coronavirus in Wuhan and its surrounding province.

Two years on, it's now sending tens of millions of people into lockdown in the entire northeastern province of Jilin, where 24 million people live, and the southern cities of Shenzhen and Dongguan, with 17.5 million and 10 million, respectively.

China, the last major country to relentlessly pursue a Covid-zero policy, reported 1,437 cases across dozens of cities on Monday. That’s a fourfold jump in a week.

Although record case numbers are testing the resilience of China’s no-tolerance approach, there is no sign the country is willing to pivot to ‘living with the virus." 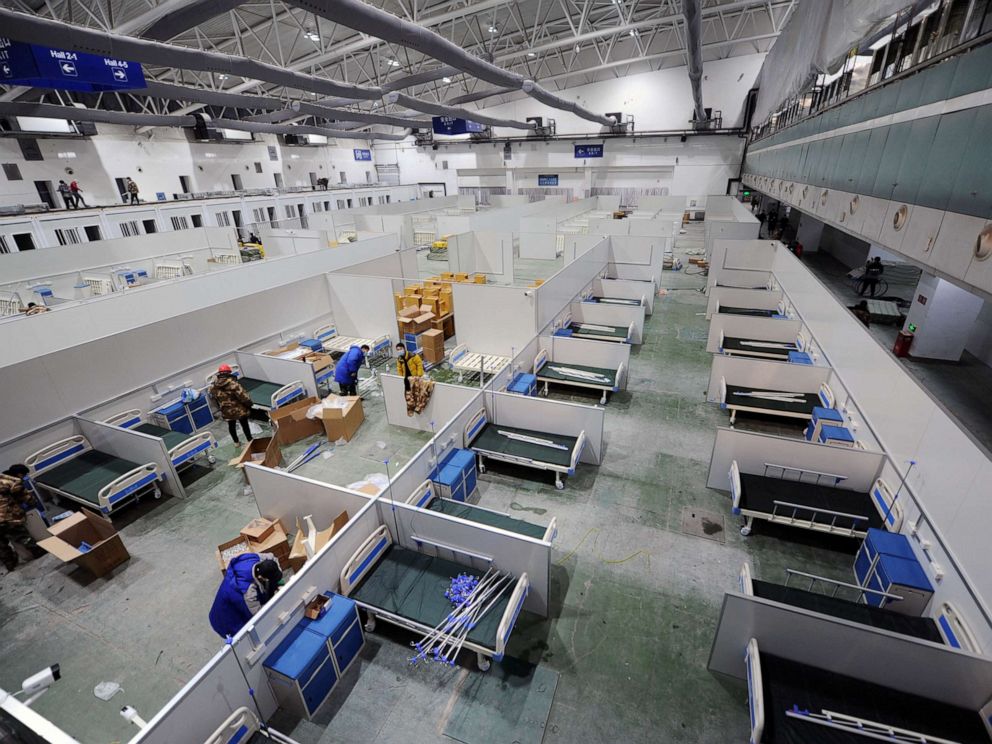 Stringer/via Reuters
Workers set up beds to convert an exhibition centre into a makeshift hospital, following the COVID-19 outbreak in Changchun, Jilin province, China on March 12, 2022.

The epicenter of the omicron variant outbreak is the Northeastern Jilin province, where 895 cases were recorded, but there are also outbreaks and containment measures in place Shanghai, the financial powerhouse, and Shenzhen, the southern tech hub.

Authorities announced on Monday afternoon that all 24 million people in Jilin province would go into lockdown, including the previously locked down city of Changchun. It's the first provincial lockdown since Wuhan and Hubei in January 2020.

On Sunday, China ordered all of Shenzhen’s 17.5 million residents into a seven-day lockdown, with three rounds of testing. All public transport is halted and all businesses, except essential services, will be closed until March 20.

As a result, Apple supplier Foxconn has shut two of its plants in the area and relocated production elsewhere.

The lockdown and outbreaks threaten manufacturing and tech production in Shenzhen, known as China’s Silicon Valley. It’s home to Huawei and Tencent, and is home to one of the country’s key ports. 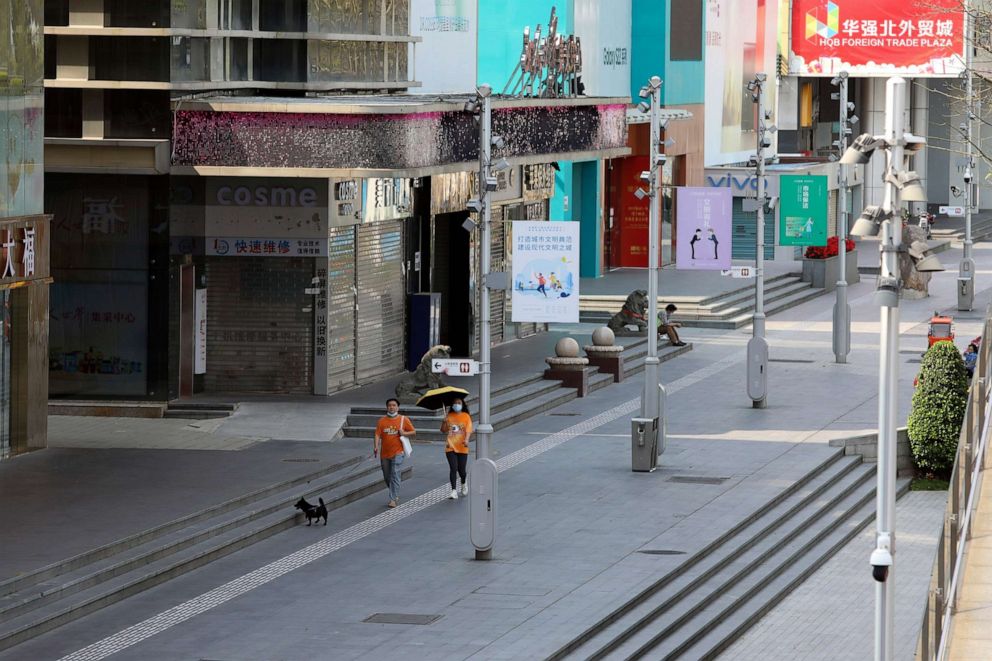 Professor Heiwai Tang at Hong Kong University told ABC News that he doesn’t expect these week-long lockdowns to have a significant impact on the country's gross domestic product.

“It seems the lockdowns will be shorter this time with more tracking, which means a short disruption of work and production," Tang said. "If it ends up lasting for weeks it’s another issue, including inflation risks.”

Professor Michael Song from Hong Kong’s Chinese University estimated that the two-month lockdown in Wuhan cost China 2% of its GDP.

There’s immense pressure on local authorities to contain the virus, with state media reporting that the Jilin City mayor and the head of the Changchun city health commission were dismissed from their roles over the weekend. 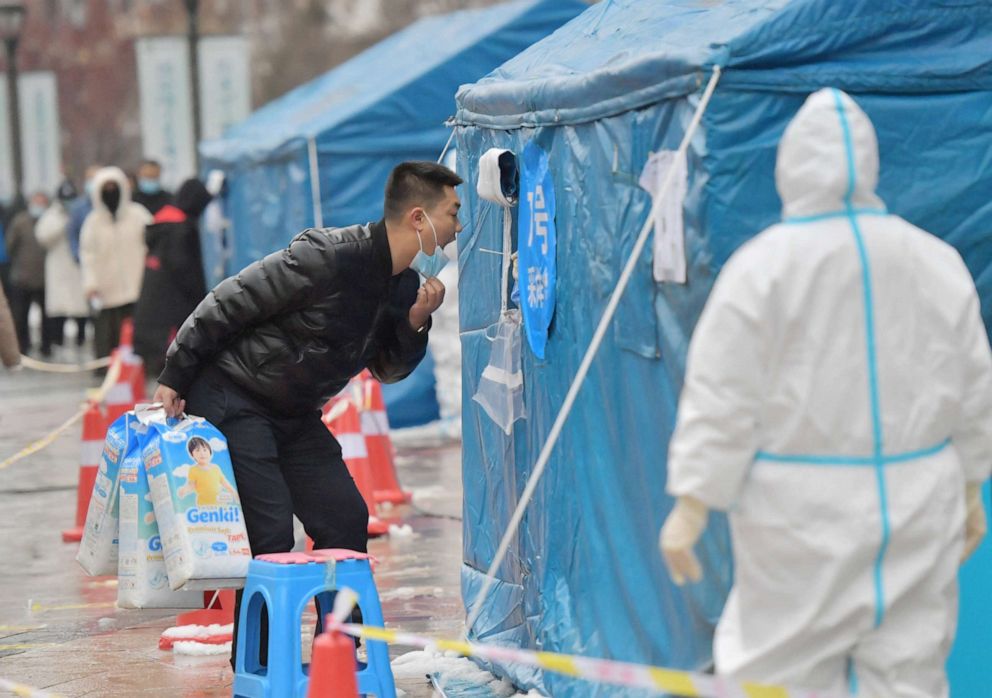 Stringer/via Reuters
A man undergoes testing during a citywide mass testing for COVID-19 in Changchun, Jilin province, China, on March 13, 2022.

Shanghai-based virologist Zhang Wenhong called the flare-up “the most difficult moment in the past two years” of China’s efforts to stamp out the virus. Shanghai has so far avoided a full-scale lockdown.

Across the border from Shenzhen, neighboring Hong Kong is also still tackling its deadliest wave yet, driven by Omicron. Hong Kong recorded 26,908 cases and 286 more deaths on Monday, officials said. Hong Kong’s death rate is the highest in the developed world, in part because of sluggish vaccination rates among the elderly.

Mega isolation facilities are being built across the Hong Kong for people with mild cases. One facility, with 3,900 beds, was built in a week. ABC News witnessed several busloads of people arriving at the facility from all over the city. 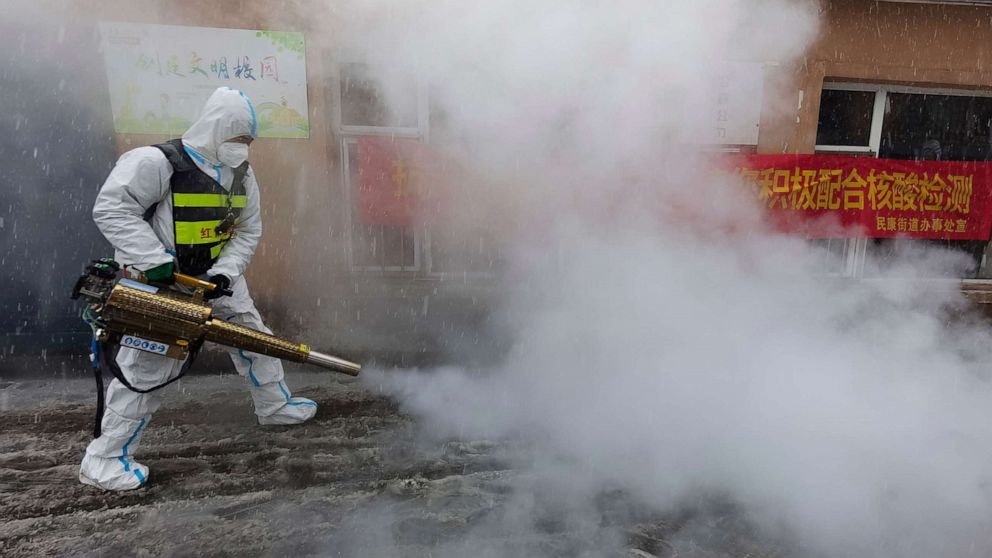 Chinatopix Via AP
A volunteer disinfects the area as it snows during the COVID-19 lockdown in Changchun in northeast China's Jilin province on March 12, 2022.

The mental-health strain of the strict lockdown has also becoming apparent. Last month, police reported three suicide attempts in 27 hours at one of the quarantine camps.