Grammy-nominated rapper Nipsey Hussle, who was gunned down on Sunday outside his clothing store in South Los Angeles, was scheduled to meet with the city's police chief and the president of police commission Monday afternoon to discuss ways he could help prevent children from getting involved in gangs.

"We're talking about programs to help underserved kids, to keep kids out of gangs. And this was his idea. We've been working on this meeting for three months. How I wish it would have been on Saturday," Steve Soboroff, president of the Los Angeles Police Commission, told ABC News on Monday morning. The rapper has spoken publicly about his involvement with the Rollin' 60s gang, one of the biggest Crip gangs in Los Angeles.

Hussle, who was lauded as an entrepreneur in his home city and "inspiration to many," was standing in a parking lot outside his clothing store in L.A.'s Hyde Park area around 3:20 p.m. Sunday when a gunman approached and shot him multiple times and left two other people wounded, police said. He was taken to a local hospital where he was pronounced dead.

The coroner determined the rapper died from gunshot wounds to the head and torso, ruling the manner of death a homicide.

Police continued working Monday to identify the killer and anyone else who may have been involved in the shooting. 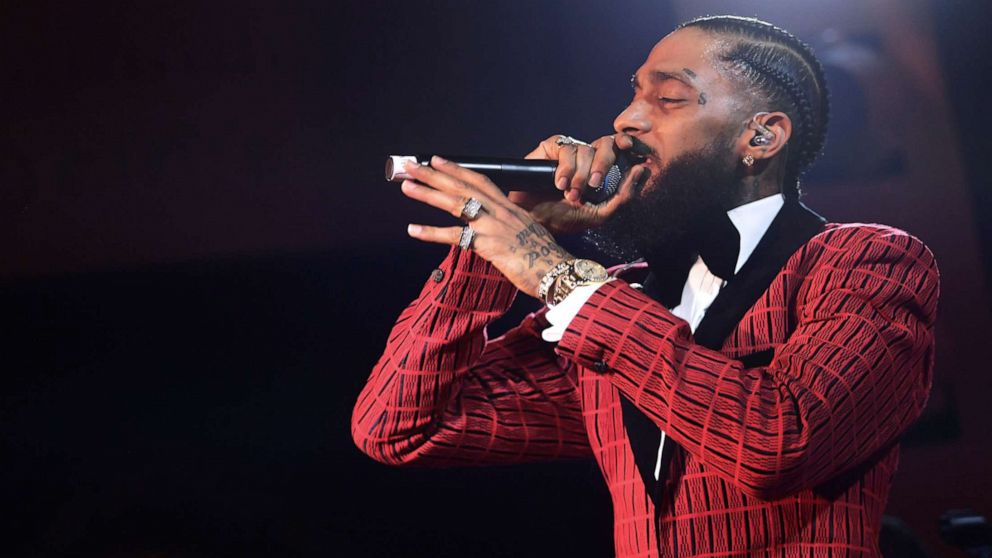 Soboroff said the meeting Nipsey Hussle had requested with him and Los Angeles Police Chief Michel Moore would go on as scheduled with representatives of Roc Nation, the entertainment company founded by rapper Jay-Z, set to attend.

"I just got a note from Roc Nation that said go ahead and have the meeting," Soboroff said. "I still have to get it verified with the chief, but I told those guys we will."

Moore tweeted early Monday that the slaying of the 33-year-old rapper, who was born Ermias Asghedom and raised in the neighborhood where he was fatally shot, came during a "troubling surge in violence" in Los Angeles.

Moore tweeted that since last Sunday, 26 victims have been shot and there were an additional 10 homicides.

"That's 36 families left picking up the pieces," Moore tweeted. "We will work aggressively with our community to quell this senseless loss of life."

Tonight's homicide in South LA represents the latest loss in a troubling surge in violence. Since last Sunday 26 victims have been shot & 10 homicides—that's 36 families left picking up the pieces. We will work aggressively with our community to quell this senseless loss of life. pic.twitter.com/1fsJXCcflS

Just hours before he was killed, the rapper took to Twitter, writing, "Having strong enemies is a blessing."

Having strong enemies is a blessing.

Some of hip-hop's biggest and brightest stars took to social media on Sunday to mourn the entertainer's death.

Hundreds of fans congregated in front of Nipsey Hussle's store, The Marathon, where he was shot.

"I was a childhood friend. I've been knowing him all my life. He was like family to me," Marquesha Lawson, breaking down in tears, told ABC Los Angeles station KABC.

Fan Jennifer Marroquin said she was always moved by the rapper's music, which she described as "real."

"I loved his music. His music was very real," Marroquin told KABC. "It was not like music you hear nowadays that don't make sense. His music made a lot of sense to everybody. " 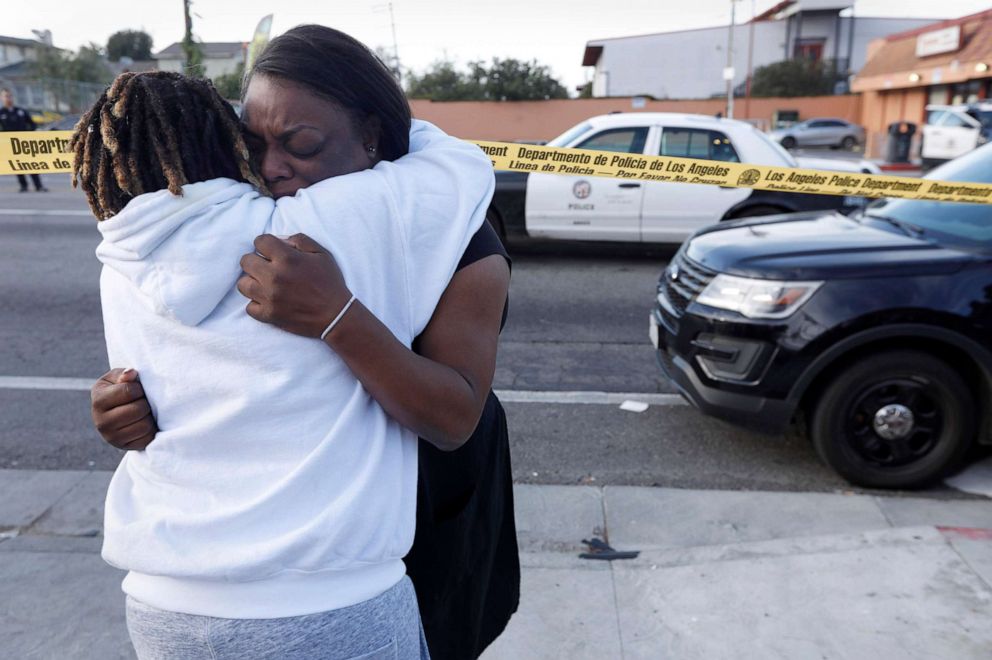 Genaro Molina/Los Angeles Times via Getty Images
"I'm telling you, that was my friend. My friend's dead. He was my childhood friend," said Marquesa Lawson, 34, left, over the shooting of rapper Nipsey Hussle who was killed in a shooting outside his store, March 31, 2019 in Los Angeles.

"Nipsey" quickly became the top trending topic on Twitter as celebrities -- Drake, Rihanna, LeBron James and Snoop Dogg among them -- and fans paid homage to the late rapper.

"My whole energy is just at a low right now hearing this. We just linked for the first time in years and said we were gonna do a new song this summer cause it had been too long," Drake captioned the picture. "You were having the best run and I was so happy watching from distance fam. Nobody ever talks down on your name."

Rihanna shared an image of the late rapper and his daughter, Emani Asghedom, at this year's Grammy Awards.

(MORE: Chance the Rapper shares story about how he met his fiancee when they were kids)

"This doesn't make any sense! My spirit is shaken by this!" Rihanna wrote in an Instagram post. "Dear God may His spirit Rest In Peace and May You grant divine comfort to all his loved ones! I'm so sorry this happened to you @nipseyhussle." 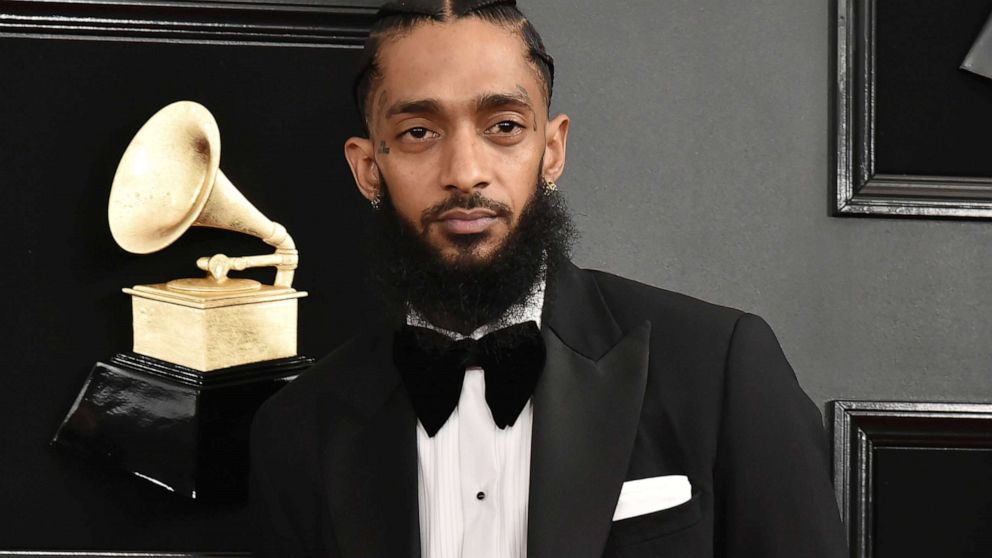 This doesn’t make any sense! My spirit is shaken by this! Dear God may His spirit Rest In Peace and May You grant divine comfort to all his loved ones! 💔🙏🏿 I’m so sorry this happened to you @nipseyhussle

Los Angeles County Supervisor Mark Ridley-Thomas, who represents South Los Angeles, where Hussle grew up, honored the rapper as a businessman and entrepreneur who was an "inspiration to many."

"We mourn his sudden and tragic passing and send his family our deepest condolences," Ridley-Thomas said in a statement. "As South Los Angeles' representative on the Board of Supervisors, I urge calm and a period of reflection. ... Our communities have lost too many young men and bright futures to the scourge of gun violence."

(MORE: Lupita Nyong'o apologizes amid criticism of inspiration for 'Us' voice: 'A creation of my imagination') 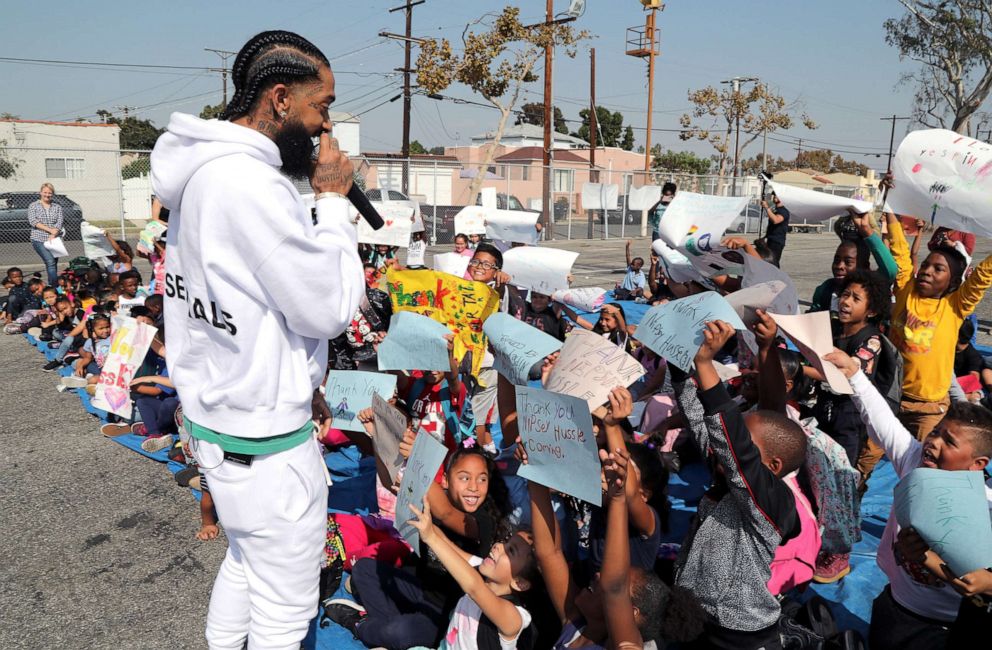 Jerritt Clark/Getty Images, FILE
Rapper Nipsey Hussle speaks to kids after the opening of a basketball court, Oct. 22, 2018 in Los Angeles. Hussle partnered with Puma to refurbish the elementary school basketball court in south Los Angeles near where Nipsey grew up.

"Our hearts are with the loved ones of Nipsey Hussle and everyone touched by this awful tragedy," Garcetti tweeted Sunday. "L.A. is hurt deeply each time a young life is lost to senseless gun violence. My Crisis Response Team is assisting the families coping with shock and grief."

(MORE: Stevie Nicks and Janet Jackson head to the Rock and Roll Hall of Fame)

Hussle is survived by his two children and his girlfriend, actress Lauren London. He was known throughout greater Los Angeles for his philanthropy and community involvement.

Watching Nipsey inspired me to invest and own in our communities. He was a solid man who loved his woman, his family and his community. This hurts.

We are at a great loss today. This hurts. Straight to the point. It’s dangerous to be an MC. Dangerous to be a b-ball player. It’s dangerous to have money. Dangerous To Be A Black Man. So much hatred. We live like our brothers and sisters in third world countries live. Right in America. Decisions we make about our own life be based on decisions cuz we might not live. Its so deep rooted. It’s not a easy fix. Hard to fix anything when kids are still living in poverty. I ain’t shutting up though, Nipsey is a True voice. He will never be silenced. He still is A stand up General for the People who never left his people. He is Loved by the people. Prayers for his family. Let’s keep pushing Truth for The Man. Love You King Nipsey Hussle/ Ermias Asghedom Respectfully, Nasir Jones

Nipsey you a legend. I respect and admire your career path and what you did for the neighborhood. My heart broke today when I saw the news. I’m praying for your loved ones. This was sposed to be the year we got one in. God had bigger plans for you 🙏🏿

You were about something..positive and for your community in every chance you had to speak..and because of that You inspired millions..millions who will uphold your legacy forever. rest amongst the stars. 🙏🏾 https://t.co/7gZ795wcQT

Broke me.... we really fighting for our lives against our own kind and really have to take risk and match the level of hatred that we are born in .. I’m tired 🙏🏾 prayers for my brother and his family

He loved us. He’s left that love with us. And it cannot die.