Devon Conley, a mom and trustee of the Mountain View Whisman School Board in California, said she typically spends the last few days of summer preparing to send her son back to school. This year, however, that process looks very different -- an entirely new set of challenges.

Her 7-year-old son will be distance learning because of the coronavirus pandemic.

"It's still going to be hard, it's going to be very different," said Conley. "The broader issue is the quality of internet access even in my house ... we're getting Zoom meetings that are dropped or the connection is bad." 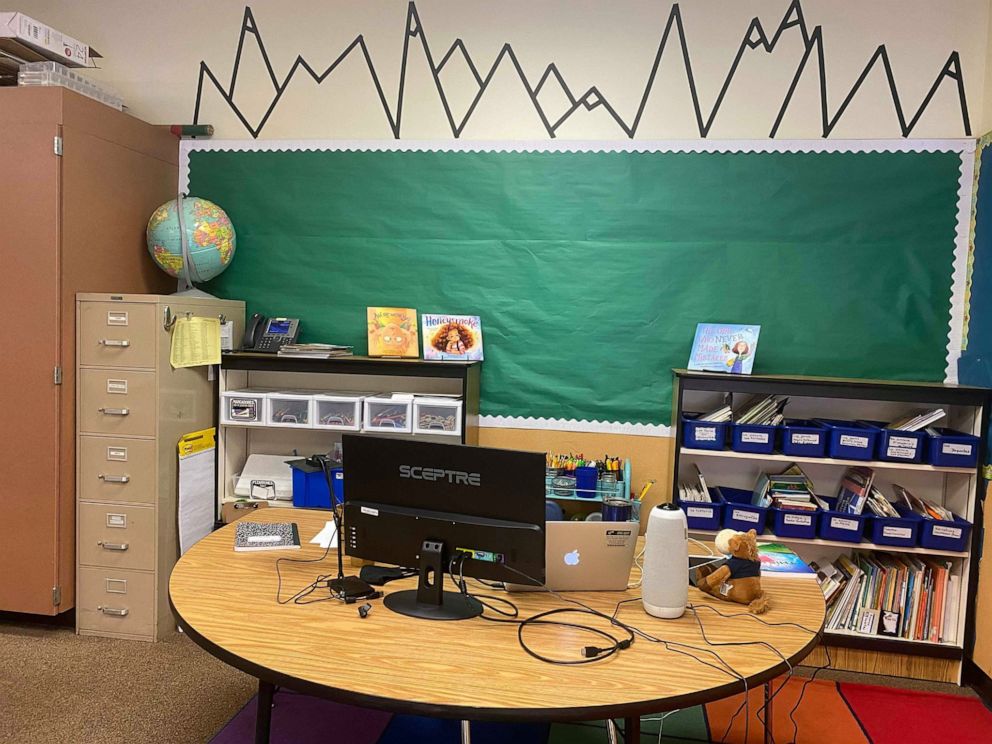 Conley said that among the students who qualify for reduced tuition in California's Mountain View school district, most don't have reliable internet access.

"It's astonishing to be in the heart of Silicon Valley and there are so many people who don't have internet access," Conley added. "We've reached a point in our daily existence where the internet is like water."

Conley said Google and other technology firms started a program to assist low-income students in her school district before the pandemic by providing hotspots and devices, but the digital divide still persists.

"There are big organizations that are stepping in some, but the problem is so large," she said. "It's a moment of panic, a realization that it wasn't just that kids couldn't do distance learning, but that whole families were going to be without access to the many different resources they need right now."

With so many school districts planning to begin the fall term only using remote learning, many students are at a distinct disadvantage. 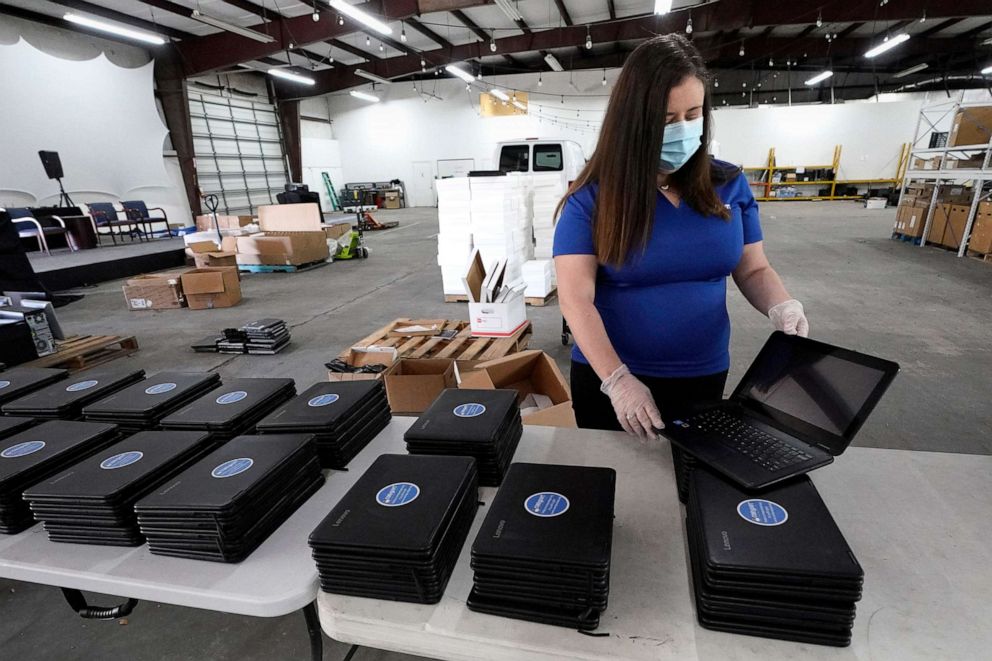 David J. Phillip/AP
Chief Executive Officer Megan Steckly readies computers to be distributed at Comp-U-Dopt, April 14, 2020, in Houston. In response to the challenges of the digital divide and closing of schools due to COVID-19 precautions, Houston Rockets' Russell Westbrook and his nonprofit organization, the Russell Westbrook Why Not? Foundation, has collaborated with Houston Mayor Sylvester Turner's Office of Education and Comp-U-Dopt to provide children and families with computers needed to access classwork and digital learning resources online.

The teacher said a major issue in her district is the lack of access to devices and high-speed internet for virtual learning. And a lack of tech support to help with troubleshooting has only compounded those difficulties.

"The people at the district office and the teachers, I think we're working more than we ever have before," Arrasmith said. "There's not enough tech support for families or for teachers."

Students and their families were told to reach out over email for help navigating digital devices, but issues of technological literacy and language barriers remain.

A lack of infrastructure persists.

"Hotspots ran out very quickly, and so many districts, including mine, are using cellphones, like iPhones, as hotspots -- and so they're giving those out for families," said Arrasmith.

It's an even bigger issue for students in more rural areas. According to a 2019 Pew Research Center report, 75% of American adults in urban areas had at-home broadband, compared with just 63% in rural areas.

The report also highlighted disparities among racial minorities, adults with lower levels of education and those with lower incomes, all of whom were less likely to have broadband.

MORE: Low-cost laptops, tablets and gadgets for back to school

Lorena Chavez, a member of the Digital Equity Coalition and a trustee at East Side Union High School District in California, is working to bridge this gap.

"Education equity is legit my life's work," Chavez said. "It's what I fight for day in and day out." 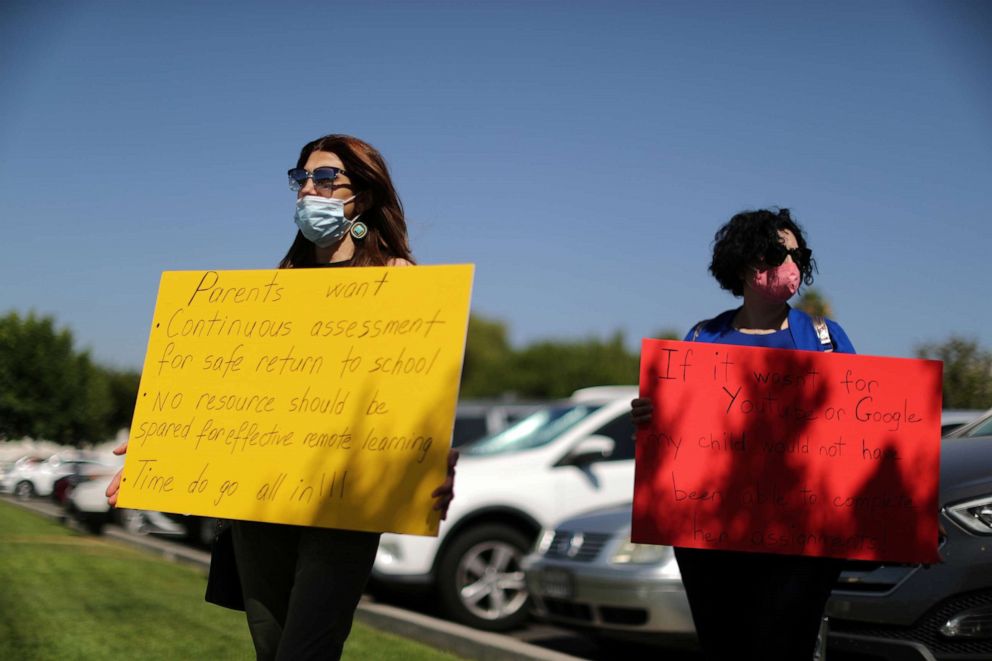 Lucy Nicholson/Reuters
Parents Angelina Hayrapetyan, 38, and Again Nazliyan, 34, participate in a protest highlighting inadequacies in their children's online education outside the Glendale Unified School District Headquarters, amid the outbreak of COVID-19, in Glendale, Calif., July 13, 2020.

Chavez, a first-generation college graduate, said her twin sister was "left behind" by the education system and that this inspired her to fight for all students to have access to educational resources.

Thousands of children throughout Santa Clara County, especially within her school district, need both devices and internet access, she added.

"We acknowledge that there's 15,000 families or more without devices, without internet access, and so we're fighting to make sure that they have access to that," Chavez said. "We're thinking both short term and long term."

Prior to the pandemic, the East Side district began a community wireless project to help build the infrastructure for wireless technology in the highest-need communities. The Digital Equity Coalition collaborated with the city and the county to expedite the project, the goal of which was to provide more students in San Jose with internet access by December.

"We're pushing this infrastructure, this digital access beyond the short term with the hotspots," Chavez continued, "so that you can just turn on your computer and have internet in the highest-need areas in the East Side of San Jose."

Chavez said she hopes to expand the program beyond her district.

"This digital divide is not new, but it's been amplified to another degree with COVID-19," she added.

Other states, including Georgia, also are scrambling to provide for students in suburban or rural areas.

"There's a lot of adult facilitation and assistance that has to happen to ensure that digital learning is happening," said Angela Orange, vice chair of the board of education for Marietta City Schools. "And for many of our low-income families that's just not possible because they're out working ... that is a real barrier that many of our families are facing."

Orange estimates that about two-thirds of the students in her district are on free or reduced-price lunch programs. Many of those children, the school board anticipated, could have issues with distance learning as well. 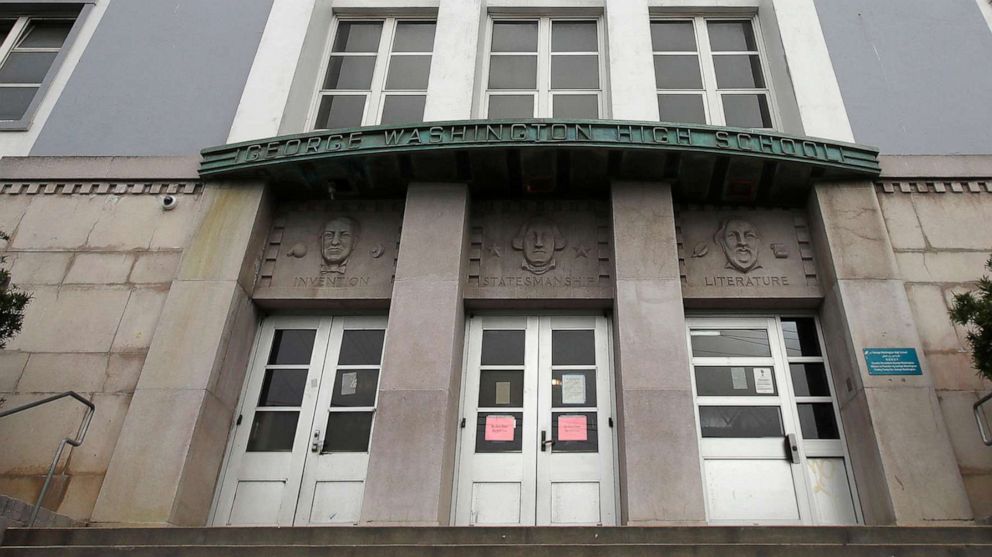 "We immediately sprang into action and sent out a technology survey to our parents, to understand what were the technology needs," Orange said. "We actually learned that many of our families either didn't have enough computers for all the school-age children in their household or did not have reliable access to the internet."

The school board purchased 819 hotspots from cellular providers such as Verizon and T-Mobile and roughly 3,500 Chromebooks.

"We purchased over 4,000 devices to distribute to our families in need to access the digital learning," she added.

Most of the students in her district live in the suburbs, where it's easier to set up a hotspot than in rural areas. Students who live farther out were sent educational packets because the internet just couldn't reach them. Orange and her colleagues said they're committed to improving at-home learning for all students.

"We've spent almost a million dollars to ensure equity of access to technology in our district," Orange said. "We're really putting our money where our mouth is in terms of equity of access."

In Texas’ Rio Grande Valley, students are also preparing for a virtual fall semester due to the coronavirus pandemic.

However, remote learning presents a challenge for many students who live in rural areas with a lack of infrastructure to support proper internet access.

“94% of our students live in poverty,” said Hafedh Azaiez, the superintendent of Donna Independent School District. “Due to the poverty, that’s creating other challenges, even more for our students because of the digital divide. A lot of our students do not have access to a technology device.”

The school district sent out a survey in June to approximately 10,000 students, which revealed that 52% of students do not have any type of internet connection at home, according to Azaiez.

To address this, the school district worked to provide all students with devices.

“We invested almost $5.7 million on getting Chromebooks and iPads for our students,” Azaiez said. “We [also] purchased brand new laptop computers for every one of our teachers, so they can have adequate technology equipment.”

Azaiez said short-term solutions such as hotspots were ineffective due to a limited range of coverage and high maintenance costs. As an alternative, he proposed a plan to the school board to install 12 internet towers, each providing a strong signal to cover large areas.

The school board approved the project and construction on the towers is expected to begin next week. The towers will be built on school property to provide long-term coverage for students living in rural communities.

“The digital divide is real, it’s been real for years now,” Azaiez said. “[It is] putting our students at a disadvantage and so, we want to make sure that’s fixed once and for all.”