Victoria Wentt can't drive a car, but she can fly a plane.

The 16-year-old from Rockville, Maryland, has yet to obtain her driver's license, but she is well on her way to getting into the cockpit of a commercial airliner.

Wentt is the first person in her family to pursue a career in aviation, and is studying Aircraft Owners and Pilots Association's High School Aviation STEM curriculum. She has already received a scholarship to attend flight school, but as a young, Black female she has struggled to identify a role model in the aviation industry. 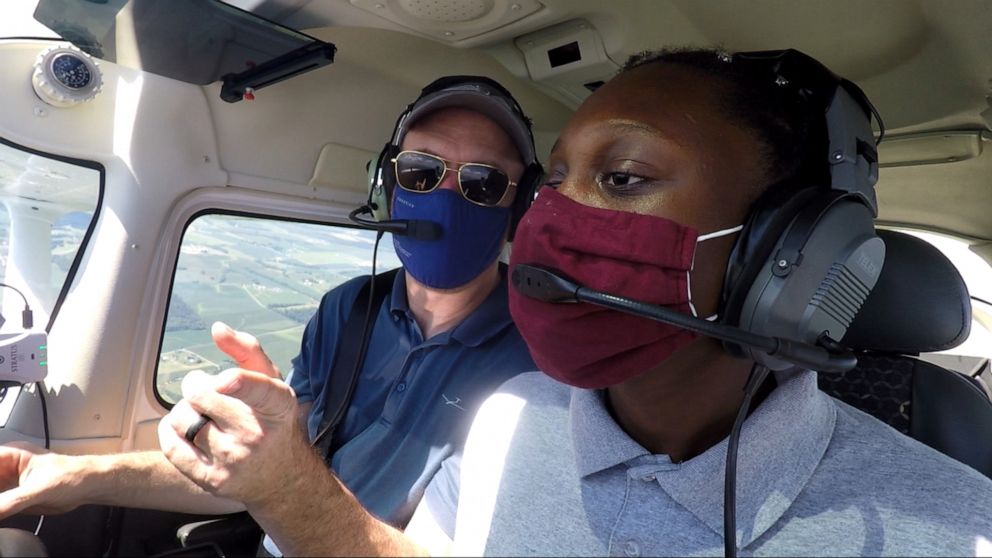 Sisters of the Sky
"With this program, I can actually turn this passion into something," Ruth Gebremariam said. Sisters of the Skies' mission is to "develop pathways and partnerships to increase the number of black women in the professional pilot career field."

Currently there are less than 150 professional Black women pilots in the U.S. that hold airline transport pilot, commercial, military or certificated flight instructor certificates. These women make up less than 1% of all professional pilots in the U.S. and some have made it their mission to diversify the flight deck -- founding the nonprofit organization Sisters of the Skies.

Sisters of the Skies, which tracks the numbers of Black female pilots, was created to inspire young girls of color to take an interest in aviation and mentor girls like Wentt, pairing them up with Black, female pilots who have already earned their wings.

'I made it thanks to you'

Monique Grayson, 33, knew she wanted to be a pilot when she took her first commercial flight from Detroit to San Francisco at 11 years old.

"I couldn't wrap my head around the fact that we were going to defy gravity for four hours," Grayson recalled.

Excelling in math and science, she got a full ride to Western Michigan University and was the first in her family to go to college. Now Grayson is a first officer -- flying the Boeing 757 and Boeing 767 for Delta Air Lines. 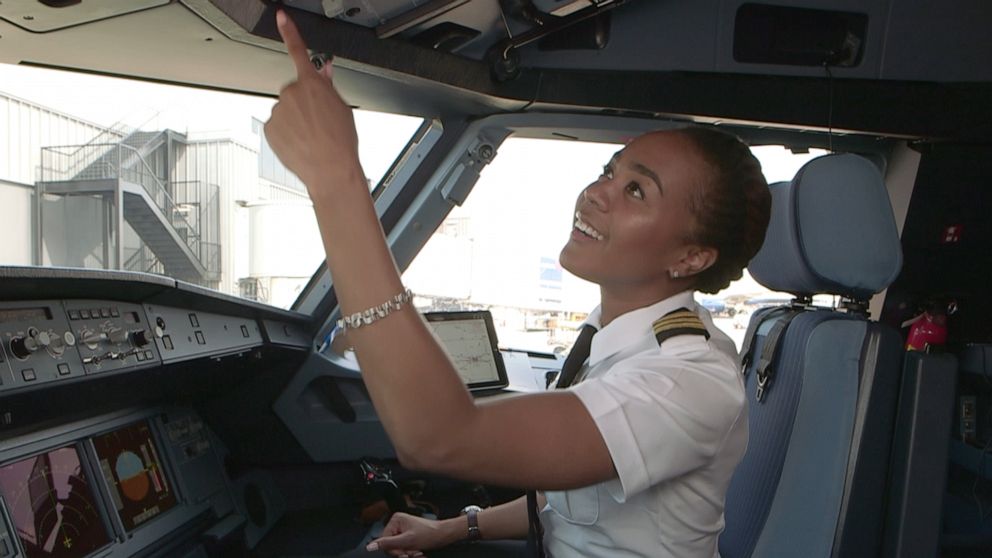 Sisters of the Skies
Representation makes a heck of a difference in deciding what people can and cannot do," Grayson said. Sisters of the Skies (SOS) says their mission is to "develop pathways and partnerships to increase the number of black women in the professional pilot career field."

On top of the financial burden, Grayson said the biggest hurdle she faced throughout her journey to become a pilot was the fact that she didn't have anyone to speak with who could relate to her experiences or give her advice.

Many other female pilots of color echoed that sentiment.

"I felt like I was on an island on my own when I was going through flight training," said Joi Schweitzer, a fellow Sisters of the Skies member and pilot.

Schweitzer was working on her instrument rating when she met Capt. Stephanie Grant, who would later be a part of the first all-female African American flight crew in the U.S. and serve on the Board of Directors for Sisters of the Skies.

"She actually encouraged me to stay the journey because it's hard work," Schweitzer said. "Years later we ended up seeing each other again. She embraced me, and I said, 'I'm here. I made it, thanks to you.' So it's very important that we have mentorship and that we inspire the next generation of aviators."

'You shouldn't be here'

When the pilots walked into a training or a ground school, they were often the only woman of color in the room.

"You can feel like an impostor," Schweitzer said. "I try to have a mentality that, you know, just be yourself. Be you. That's all you can do. You're professional. You're competent. You deserve to be sitting there just as much as the next person."

But many of these women were met with scrutiny and doubt when they shared their dreams of flying with others.

"You go through with society telling you that this isn't your career, 'You shouldn't be here,'" Grayson said. 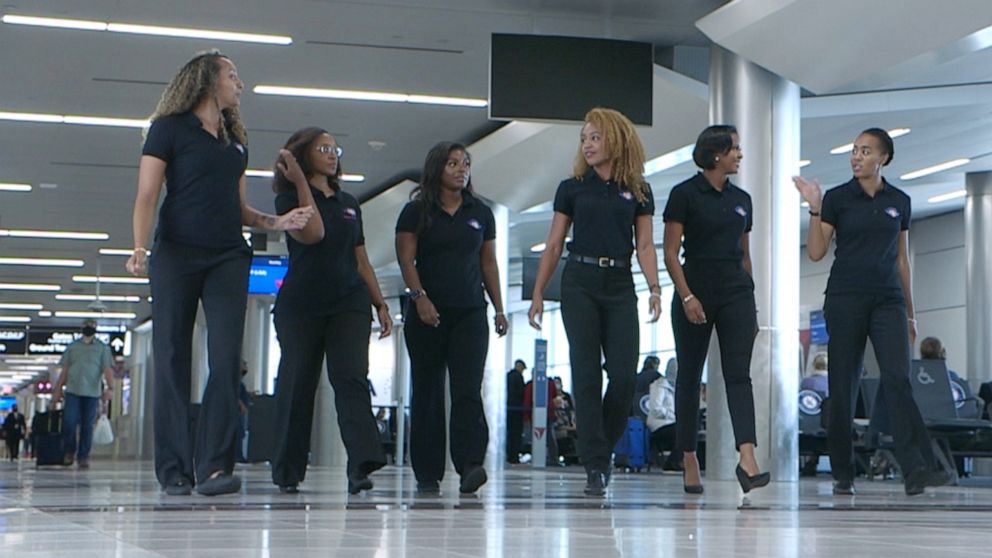 ABC News
Sisters of the Skies (SOS) says their mission is to "develop pathways and partnerships to increase the number of black women in the professional pilot career field."

In college one of Grayson's male classmates told her "she might as well join the circus" after she introduced herself as a student in the aviation program.

"Sometimes they don't think women should be flying, let alone a woman of color," said Grant, who didn't meet another Black female pilot until she was in her thirties. "So we have to go in -- just as, I would say, even more prepared to prove that we can do it. Nobody gave us this position."

Even now, the pilots explained it is "almost the norm" for them to be mistaken for flight attendants.

"'People say 'Oh, you're the actual pilot?,'" Alexis Brown, a pilot and Sisters of the Skies member, shared. "Like, you did the takeoff and the landing?'"

'Now that they see it, they can be it'

At Sisters of the Skies outreach events, young girls get to suit up in pilot gear, manipulate the flight controls, talk to air traffic control, plan their own flight and even fly in a jet.

"I want to make sure that in life little girls know that now that they see it they can be it," Grant said.

Schweitzer believes there are so few women of color that are pilots because "a lot of young girls aren't exposed to it." 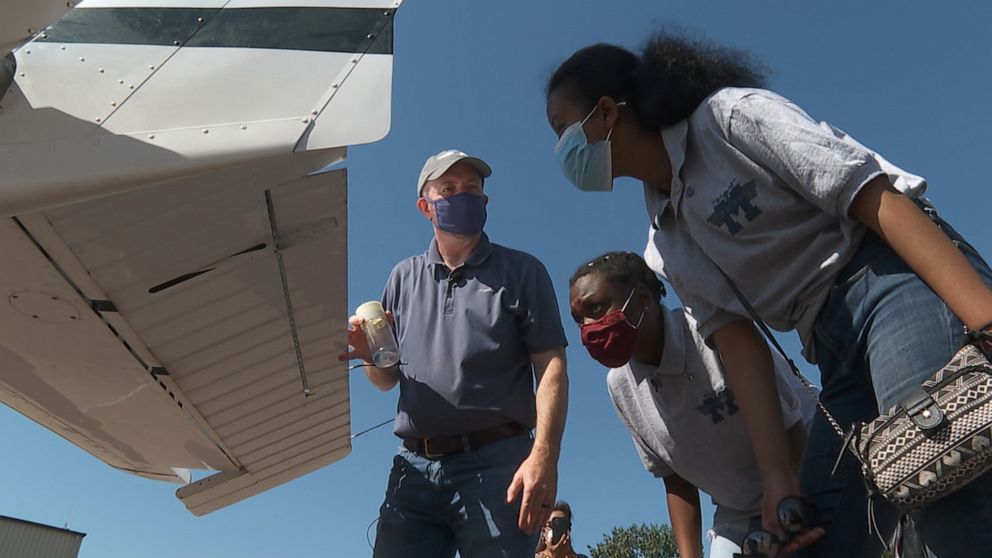 "These girls come in and they're really shy," Grayson explained. "And then after the day ends, they're bursting with energy and have a thousand and one questions. And then the even better part of it is, you get the emails that say, 'Oh my gosh, my daughter participated in your event, and look, she's doing her first solo,' or, 'My daughter came to your event, and she's so interested in flying we're looking at flight schools.'"

Grayson's advice for younger girls is to not "let the limitations that either you put on yourself or society puts on you dictate what you're supposed to do in life."

"The sky is not even the limit," Grayson said with a smile.

'It's gotta bounce back, right?'

As the COVID-19 pandemic continues to take a toll on the airline industry, Sisters of the Skies' call for more representation is more pressing than ever with at least eight Black female pilots facing layoffs in October.

The organization is trying to encourage young girls like Wentt to pursue a career in aviation despite looming job cuts.

"Hey, you know, you can't walk to Europe," Grant joked. "So it's gotta bounce back, right?"

Grant and many other Sisters of the Skies pilots have not flown since March and April as airlines cut back on flights due to declining demand.

"We check on each other all the time," Grant said. "It's a tough time for everybody, not just our industry."

They all insist their "sisterhood" is stronger than ever.

"I may not even know the other Black female pilot that's rolling her bag down the jet-way or just in the concourse," Grant said. "But when we see each other there's a synergy. We go and we hug. Because we already know it's not many of us."