A three-state, five-day final journey for George Floyd ended Tuesday in Houston, the city he called home for most of his life.

Thousands of mourners, including longtime friends and family members, gathered for the final funeral services at The Fountain of Praise church. Many wore black face coverings and sat apart in the pews as pallbearers brought Floyd's gold-colored casket up the aisle.

Family members broke down as they approached the casket and paid their respects one last time. 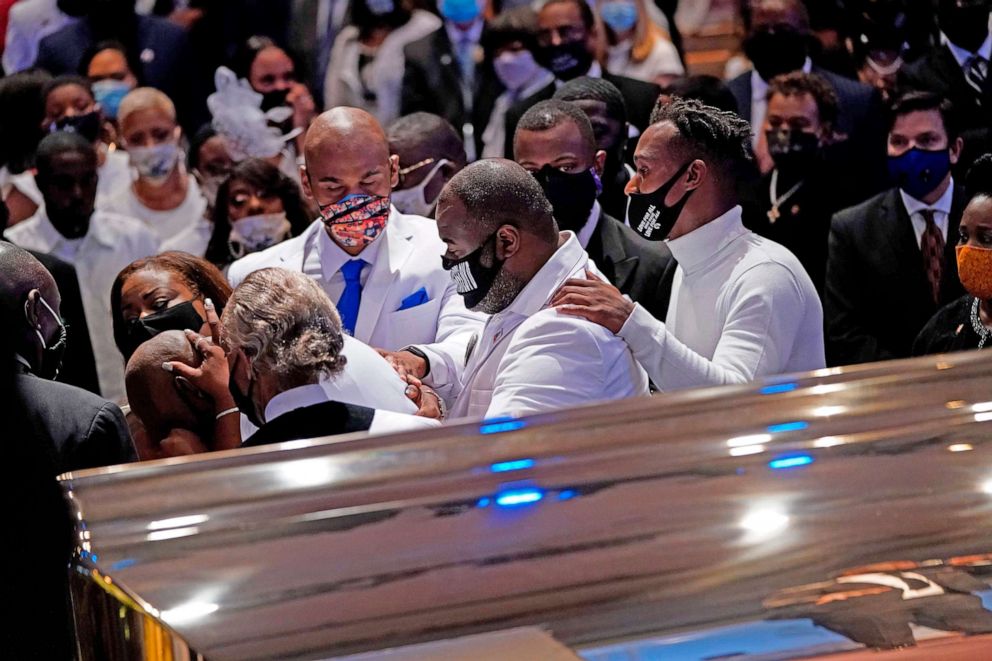 David J. Phillip/Pool/AFP via Getty Images
Philonise Floyd, brother, of George Floyd is comforted in front of the casket during the funeral on June 9, 2020, at The Fountain of Praise church in Houston.

"I’m going to miss my brother a whole lot," LaTonya Floyd, George Floyd's sister, said through tears. "I thank God for giving me, my own personal Superman."

Religious leaders, gospel singers and other celebrants shared their condolences with Floyd's kin through prayers, poems and songs.

MORE: Public viewing for George Floyd to begin in Houston 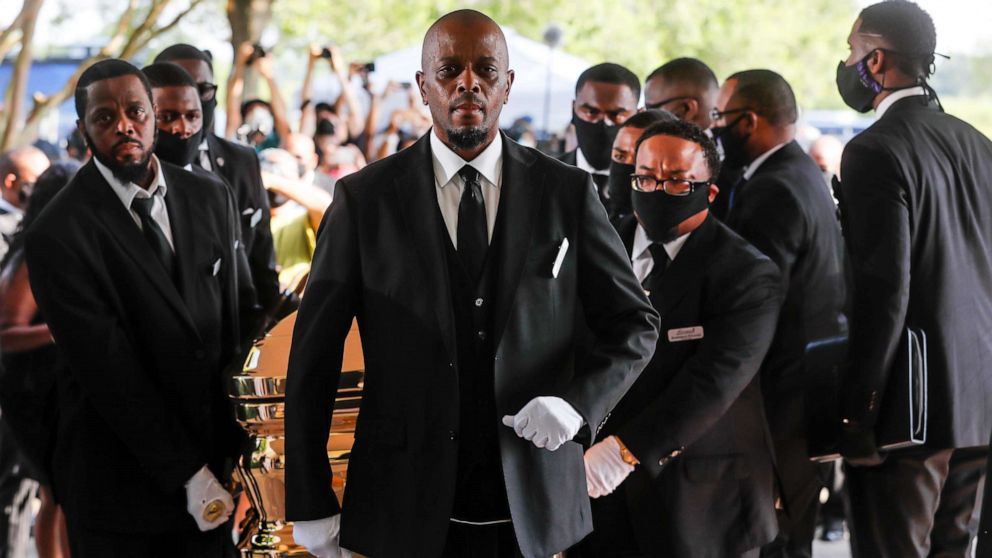 Godofredo A. Vasquez/Houston Chronicle via AP
Pallbearers bring the coffin into The Fountain of Praise church in Houston for the funeral for George Floyd on June 9, 2020.

A painting depicting Floyd, 46, with angel wings and a halo was placed behind the pulpit. He grew up in the city's Third Ward, where he was loved by friends and family alike.

They often referred to the 6-foot, 6-inch man as a "gentle giant." 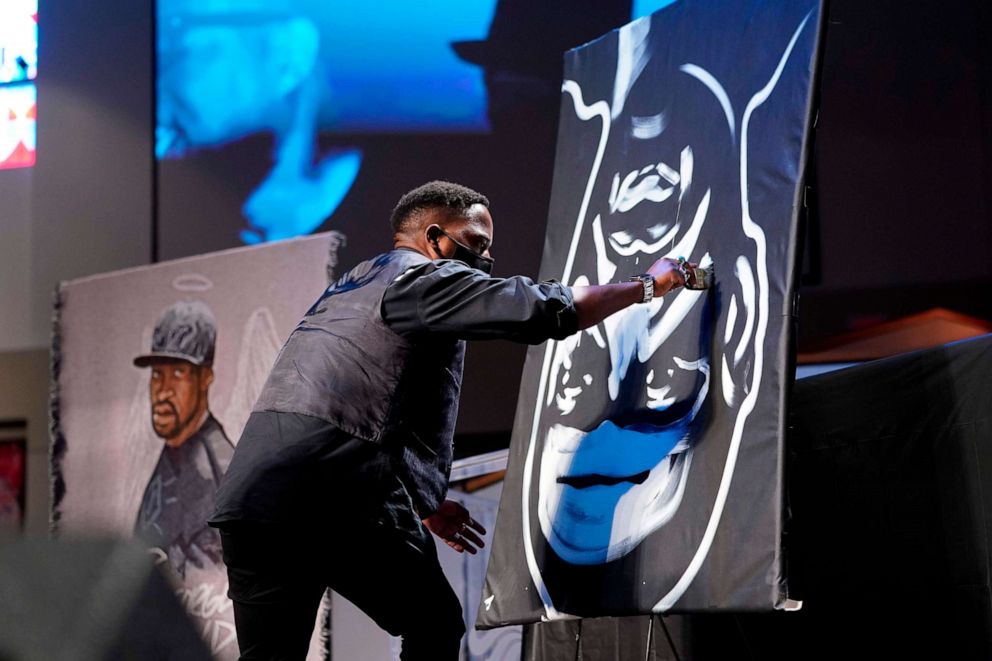 David J. Phillip/Pool/AFP via Getty Images
A man draws an image of George Floyd during the funeral service for Floyd at The Fountain of Praise Church on June 9, 2020, in Houston.

"He was a pesky little rascal, but we all loved him," Kathleen McGee, Floyd's aunt, said. "I just want to thank all of the mothers who are here today. Just hug them and love them because we don’t know when the time will come."

Floyd played football for Houston's Jack Yates High School as a tight end and was part of the team that went to the state championship in 1992. Ivy McGregor, a high school classmate, said the school community has been deeply saddened by the loss.

"George Floyd has left a legacy of love, loyalty and service to Jack Yates Senior High School," she said.

Floyd's death 15 days ago in Minneapolis at the hands of four officers set off worldwide protests against racial injustice and police brutality.

A montage of videos of those protests was shown on a big screen while Dray Tate sang “A Change is Going to Come.” During the montage, Ange Hillz created a large sketch of Floyd's face with white paint on a black canvas.

Floyd's niece Brooke Williams gave a passionate eulogy chastising the four officers who arrested Floyd and pinned him to the ground. She also took a not-so-subtle dig at President Trump, who has come under fire for pushing for tough police action in cities that are experiencing protests. 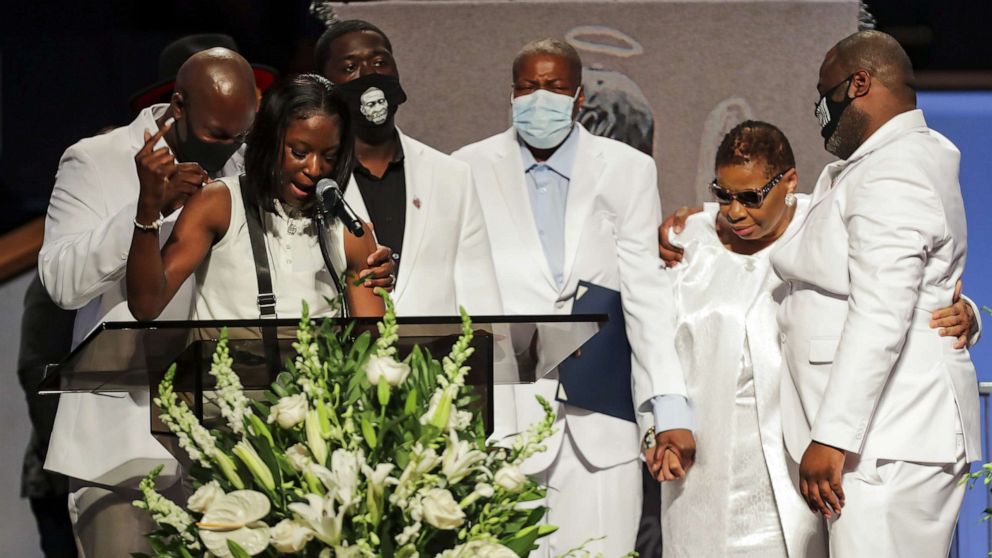 Godofredo A. Vasquez/Pool via Getty Images
Brooke Williams, niece of George Floyd, speaks with the rest of the family, during the funeral for George Floyd at The Fountain of Praise Church on June 9, 2020, in Houston.

"Someone said, 'Make America great again,' but when has America ever been great?" Williams said to cheers. "You shouldn’t feel this pain, no one should feel this pain." 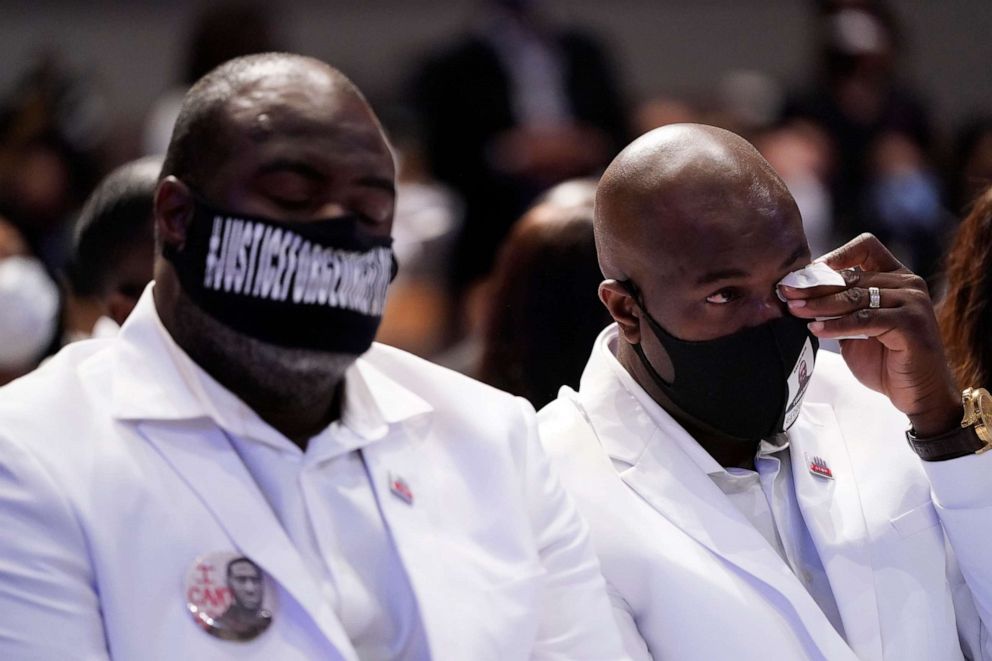 Floyd's final words were "I can't breathe," a term McGregor said everyone should take to heart.

"We stay with this family as you breathe, we breathe with you," she said.

Floyd stayed close to his Houston family and friends and kept in close contact with his daughter, Gianna, 6, and her mother Roxie Washington. He was planning on bringing them to Minneapolis full-time, according to friends and family. 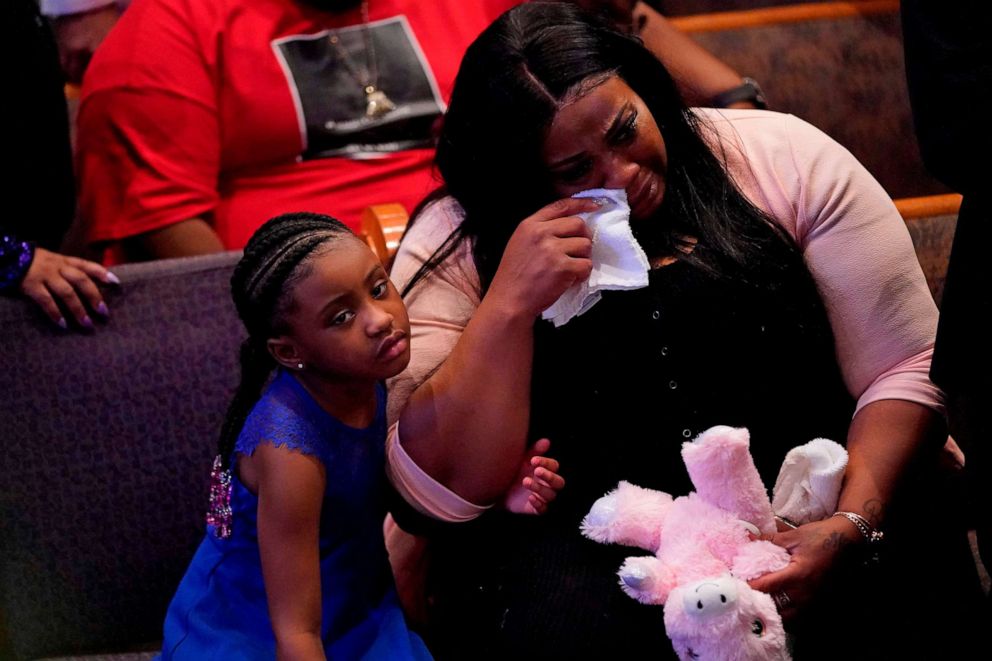 David J. Phillip/Pool/AFP via Getty Images
Gianna Floyd, the daughter of George Floyd, sits with Roxie Washington as they attend the funeral service for George Floyd at The Fountain of Praise church, June 9, 2020, in Houston.

He remained active in the community, particularly in his church, and helped organize events including Bible studies and basketball tournaments.

"All I think about is when he was yelling for momma," Floyd's brother, Philonise Floyd, said. "Every momma felt that."

Vice President Joe Biden spoke via video at the ceremony, offering his condolences and calling for change for black Americans. Biden, who lost his wife and daughter in a car accident in 1972, addressed Gianna during the video.

"You’re so brave. Daddy’s looking down and he’s so proud of you," he said. 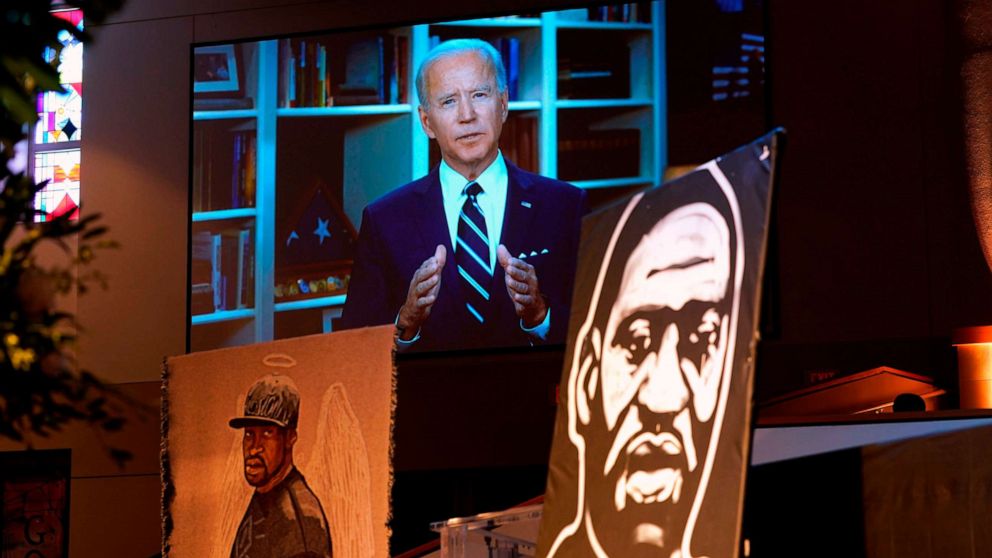 David J. Phillip/Pool/AFP via Getty Images
Former Vice President Joe Biden speaks via video link as family and guests attend the funeral service for George Floyd at The Fountain of Praise Church on June 9, 2020, in Houston.

Biden said Floyd's death was all too common for black Americans.

"Why, in this nation, do too many black Americans wake up knowing that they could lose their life in the course of just living their life?” he said. 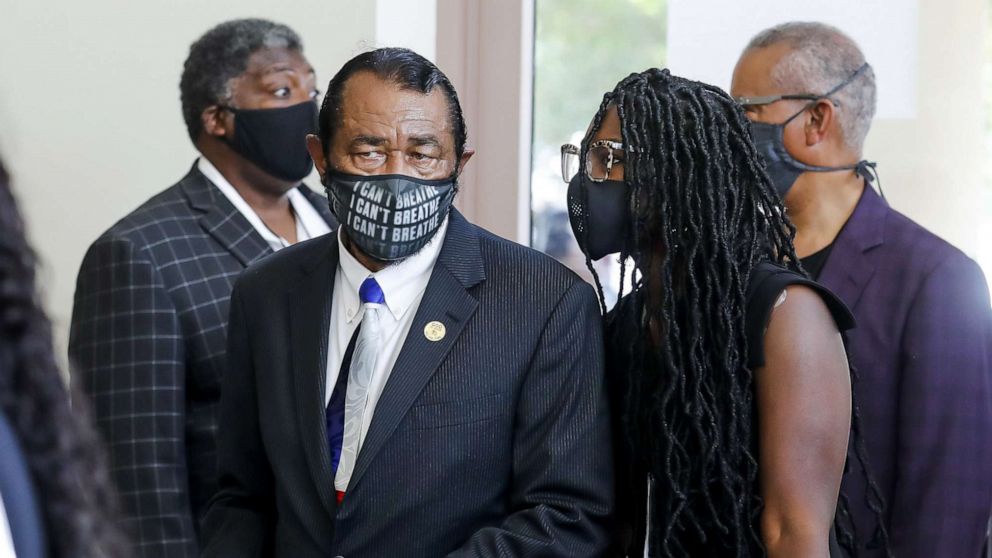 Godofredo A. Vasquez/Pool via Getty Images
Congressman Al Green enters The Fountain of Praise church for the private funeral for George Floyd on June 9, 2020, in Houston.

Houston Mayor Sylvester Turner also shared his condolences with the family and said he would make immediate reforms in his city through executive orders.

"In this city, we will ban chokeholds and strangleholds … you must exhaust all alternatives before shooting," he said.

After the funeral, Floyd's body was taken to Houston Memorial Gardens in Pearland, and mourners gathered on the streets to watch the procession.

Floyd's body received a police escort and for the final mile the casket was brought in a horse drawn-carriage.

Floyd was buried next to his mother, Cissy.

The burial marks the end of memorial celebrations that began on Thursday in Minneapolis and included an event in North Carolina, where Floyd was born. 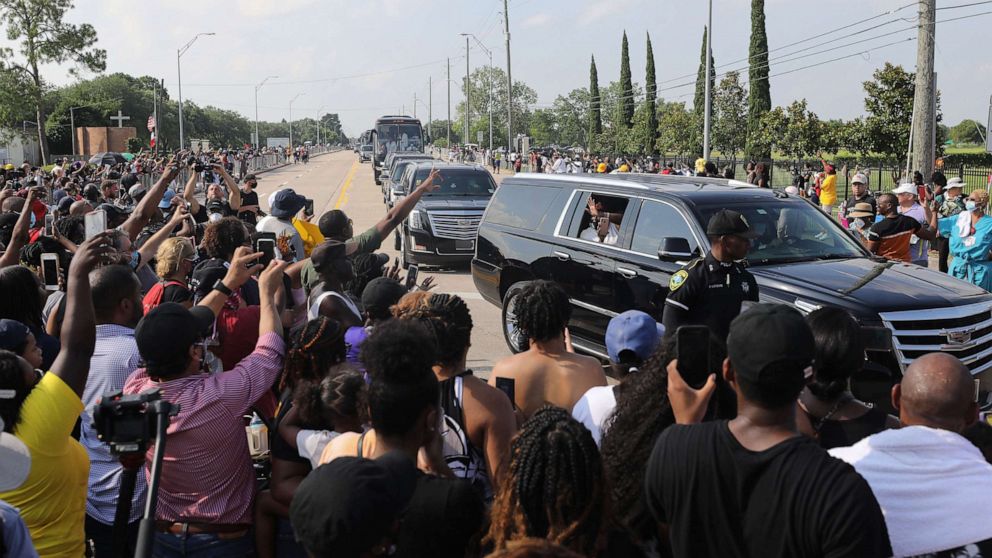 In 2007, Floyd was charged with armed robbery and sentenced to five years in prison as part of a plea deal in 2009. After he was released from prison, Floyd moved to Minneapolis for better job opportunities and held several jobs including working as a bouncer at a restaurant.

On May 25, a convenience store clerk called 911 and reported that Floyd had used a phony $20 bill to pay for cigarettes. Four police officers, Derek Chauvin, Thomas Lane, Alexander Kueng and Tou Thao, answered the call and arrested Floyd outside of his car.

The arrest was captured on several cameras as Chauvin placed Floyd on the ground and put his knee on Floyd's neck for nearly nine minutes while Floyd said "I can't breathe" before going lifeless. The officers were fired from the force and all were subsequently arrested. 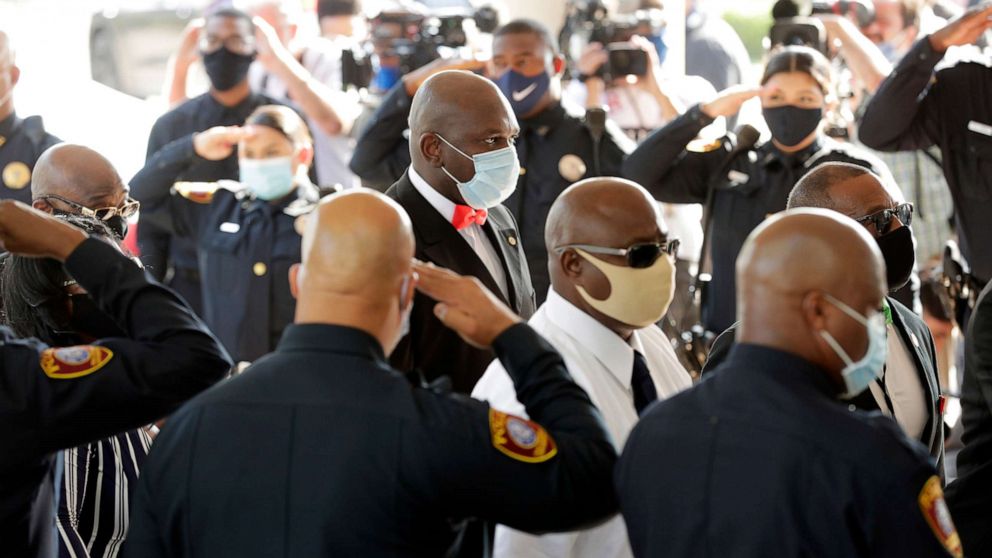 Eric Gay/AP
George Floyd's family arrives for Floyd's funeral service at the Fountain of Praise Church on June 9, 2020, in Houston.