Players from a high school girls soccer team in Vermont were penalized after they revealed a message promoting equal pay under their team jerseys during a game, the team's coach said.

For Friday night's game, which was senior night, the entire team -- as well as the coaching staff and members of the crowd -- wore the custom-made white T-shirts adorned with #EQUALPAY, Hayes said. After the warmup, the girls placed their jerseys over the shirts to comply with the bylaws of the Vermont Principals' Association, but after a late goal was scored with thee minutes left in the game, some players took off their jerseys in excitement.

"The fans were just absolutely going crazy," and began chanting "equal pay," Hayes said. However, the officials ran over and issued four yellow cards for unsportsmanlike conduct over the excessive celebration.

Huge thank you to everyone who came out last night! Even if things didn’t quite go as planned... we heard your #EQUALPAY chants from all over the field 🤩🤩🤩 Also- it’s not too late to get a jersey!! Link in bio #worthit #seniors

The penalized players had to sit out for some of the game but were eventually allowed back in, Hayes said.

Members of the team admitted that they got "carried away" by taking their jerseys "all the way off," but said the message outweighed the penalties they received.

"It goes for everyone -- every girl, every woman, the world," player Helen Worden said. "It’s not just about sports.” 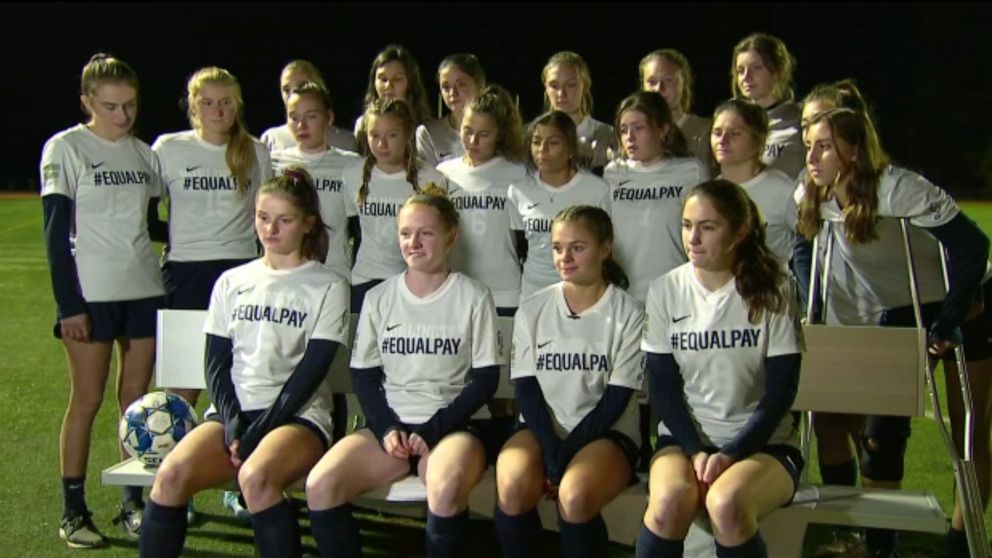 ABC News
Players from the girls' soccer team at Burlington High School in Vermont were given yellow cards for unsportsmanlike conduct after their #EqualPay jersey caused an excessive celebration on the field and in the crowds.

Friday night's game ended in a tie, but the team feels as if they won in the spirit of spreading the message.

They have now sold more than 700 of the shirts, inviting men and boys to pay 16% more, which represents the average pay gap in Vermont, according to the team. The Burlington High School boys' soccer team has even worn the shirts in solidarity.

Vermont Sen. Patrick Leahy and his wife, Marcelle, were among the purchasers. Leahy tweeted a photo of the couple wearing the shirts, stating, "Marcelle and I stand with you!"

The referee who issued the yellow cards even bought a shirt after the game and told the players he's excited to wear it, according to the team.The money made in the sales will go to support youth soccer leagues in the community.

"They did such an amazing job with getting involved in the community," Hayes said.