Jury selection for the trial of Theranos founder Elizabeth Holmes began last week and was completed over a three-day process, with the prosecution and the defense agreeing on seven men and five women.

Holmes was charged by the Department of Justice with 12 counts of fraud more than three years ago, accused of defrauding investors, patients and doctors. She potentially faces decades in prison if convicted. She has pleaded not guilty.

Three weeks ago, a panel of 240 potential jurors were summoned to complete a 28-page questionnaire that focused heavily on their media consumption and knowledge of those involved with the case, as well as their own medical history. The defense had originally submitted a more extensive questionnaire with 112 pages and 45 questions that presiding United States District Judge Edward Davila then trimmed.

Of the 240 potential jurors, Davila and attorneys from both the prosecution and defense called in 132 to the Robert F. Peckham Federal Courthouse for questioning. Holmes was present in the courtroom alongside her team of lawyers, who watched and took notes as potential jurors entered for voir dire. 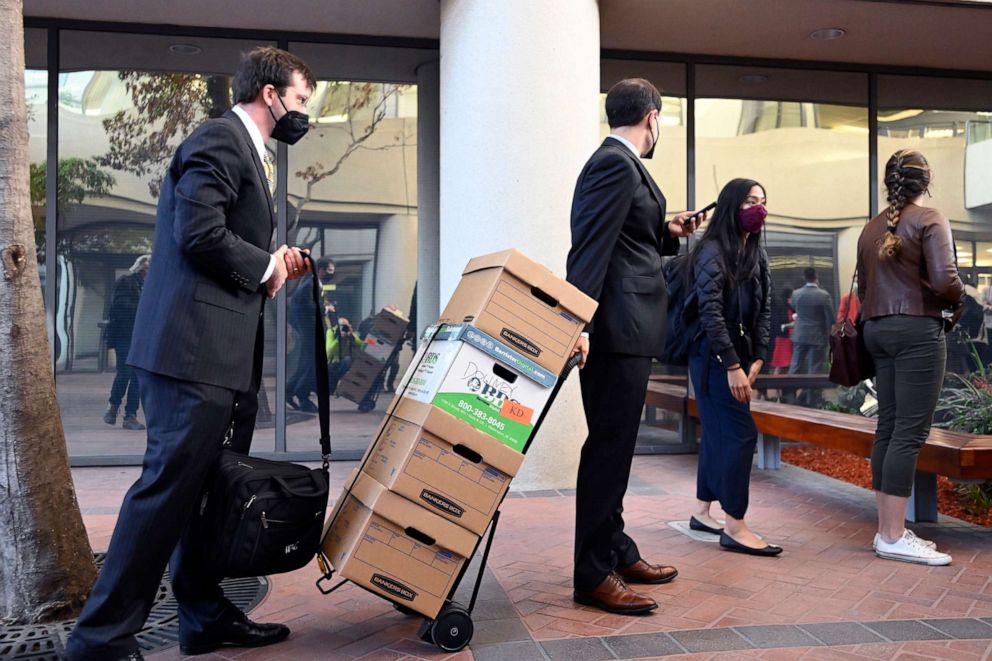 Nic Coury/AP, FILE
Defense attorneys for Elizabeth Holmes, founder and CEO of Theranos, arrives at the federal courthouse for jury selection in her trial, Aug. 31, 2021, in San Jose, Calif.

One of Davila’s first questions to the potential jurors was related to whether any of them had seen the media coverage surrounding Holmes. About half raised their hands, including now-dismissed potential juror Michael Roccaforte.

Roccaforte spoke exclusively to ABC News' Rebecca Jarvis on "The Dropout: Elizabeth Holmes on Trial" podcast, where he described his experience throughout the process. He recalled seeing Holmes standing in front of the courthouse while he and other potential jurors were walking in.

"She was kind of staring at all the jurors as they walked in ... almost looking as if she was about to greet us or something," Roccaforte told ABC News.

Once in the courtroom, he described Holmes as "confident, poised" and "a little bit intense." 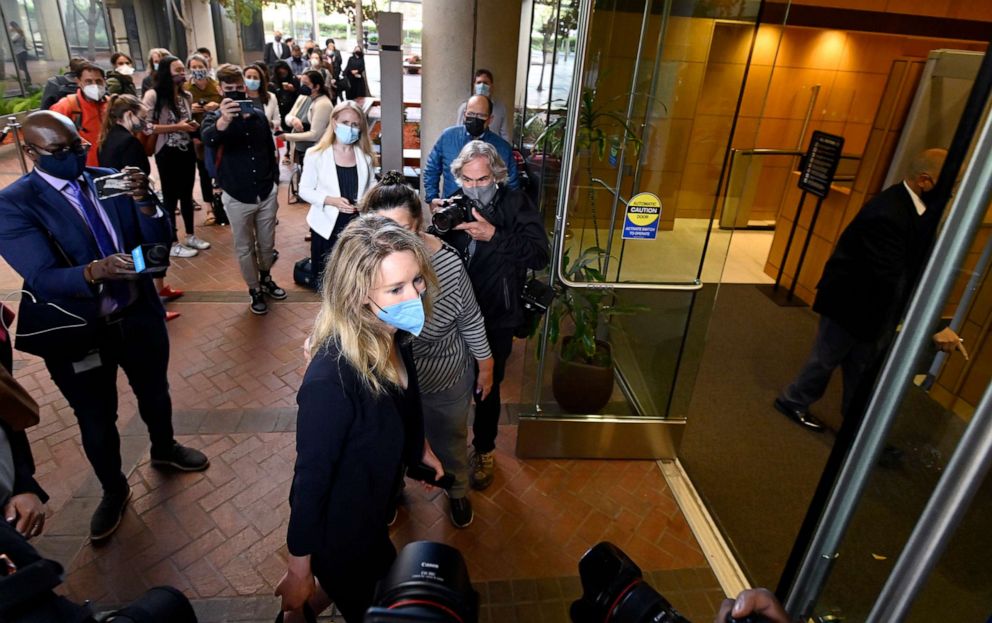 Roccaforte, who is a radio producer in San Francisco, told Davila it would be difficult for him to do his job and avoid seeing the breaking news around the trial.

Ultimately, Roccaforte was dismissed, and the banter between him and Davila caused some in the crowd to laugh, including Holmes.

"Elizabeth Holmes looked back at me and chuckled herself and we made eye contact for a second," Roccaforte said.

Other potential jurors were released for a range of reasons, from their own health issues to financial hardships to biases they couldn’t put aside.

"The ideal juror for Elizabeth Holmes would be someone who would … find her to be a likable kind of person ... or has either personally or knows someone close to them who believes they have been wrongfully prosecuted in a case, so they just have a general mistrust of government or authority figures," James McGarity, a partner at the jury consulting firm R&D Strategic Solutions, told Jarvis on "The Dropout: Elizabeth Holmes on Trial."

Defense attorney Jose Baez said the defense would benefit if the jury included a small business owner or entrepreneur.

"You want people who have the audacity to take a chance, to risk their livelihood on something that's unproven and, at the same time, they could relate to having bad people working for you or sometimes things that are outside of your control," Baez said.

As for the prosecution’s ideal juror, defense attorney Dick DeGuerin, who is currently representing accused murderer Robert Durst, said they would like somebody "that wants to enforce the law no matter what."

McGarity agreed, saying the prosecution would likely seek "people who are what we call 'law and order' types, who invest a lot of faith in the law and law enforcement, people who believe that charges against someone like Ms. Holmes would not be brought unless there is solid evidence."

The jury now ranges in age from 19 to about 60 years old. Of the 12 jurors, six are white, four are Hispanic, and two are Asian. There are also two jurors who said that English was not their first language, with one saying that she had to use a translation device on her phone to understand some of the words in the questionnaire. 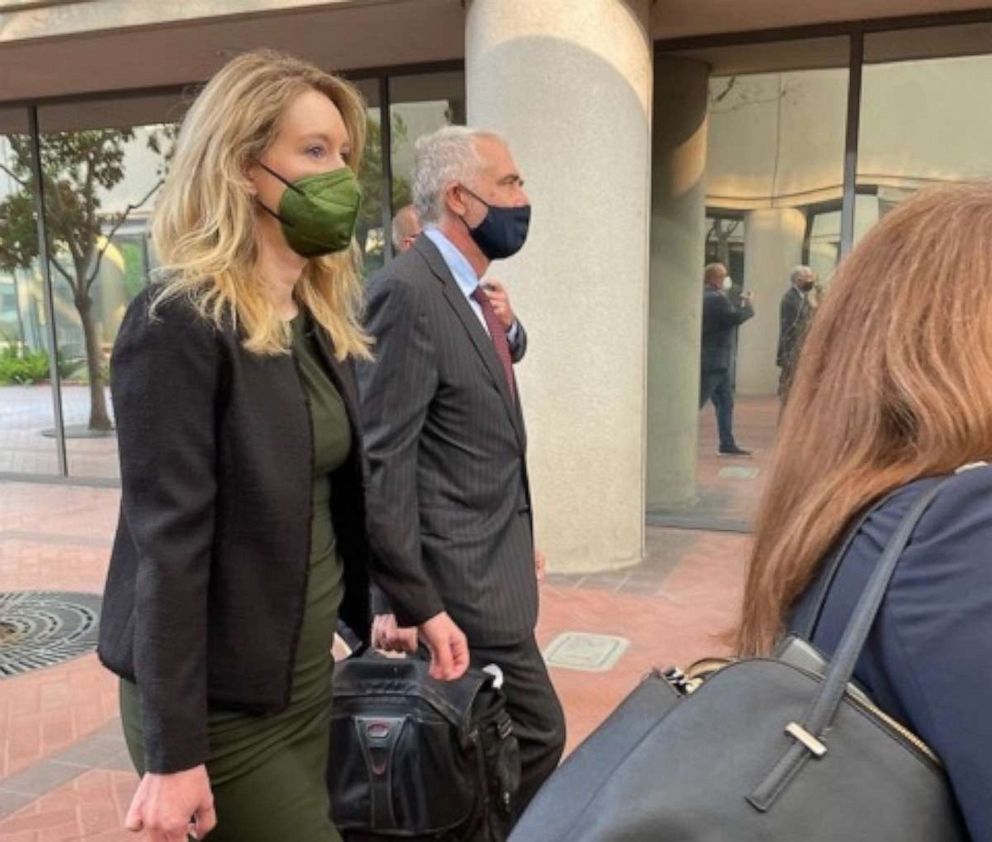 "If I was on Elizabeth Holmes' team, I would probably not be thrilled that older males are more prevalent in the jury panel than others. I would probably prefer to have more females who are younger and would identify with her ... and be more inclined to believe her story that she was manipulated by her partner, Sunny," McGarity said.

Three days before jury selection began, Holmes introduced bombshell allegations that she was a victim of emotional, physical and sexual abuse at the hands of Theranos COO Ramesh "Sunny" Balwani, her former boyfriend. Balwani has denied these accusations.

However, Natalie Davis, a jury consultant and professor emerita at Birmingham Southern College, disagrees with McGarity about the makeup of the jury. She said she thinks having more men on the jury could be a positive for Holmes.

"Women don't trust other women. ... I was the jury consultant in the very first major case on breast implants. The all-female jury just dumped all over her … and I think that women are going to be hard on this case," Davis said. "I think that women are much more likely not to believe Elizabeth to be a weak person."

Opening arguments begin Sept. 8 and the trial is expected to last 13 weeks.

Listen to the newest episode of "The Dropout: Elizabeth Holmes on Trial" HERE:

New episodes of “The Dropout” are available for free on Apple Podcasts, Spotify, Amazon Music, or wherever you listen to podcasts. Click here to find the show on your favorite app.