The Hallmark Channel apologized for removing gay-themed commercials from rotation as backlash against the decision grew over the weekend.

Hallmark's parent company, Crown Media Family Networks, said it pulled ads for wedding planning website Zola -- including one that showed a lesbian couple kissing after getting married -- due to complaints from One Million Moms, a conservative group that is a part of the American Family Association.

The decision to remove the ads sparked major backlash online from celebrities, politicians and LGBTQ advocates, including some who called for a boycott of the family friendly network.

"The Crown Media team has been agonizing over this decision as we’ve seen the hurt it has unintentionally caused. Said simply, they believe this was the wrong decision," Hallmark Cards CEO Mike Perry said in a statement Sunday evening. "We are truly sorry for the hurt and disappointment this has caused."

"Across our brand, we will continue to look for ways to be more inclusive and celebrate our differences," he added.

Perry said the company's mission is "rooted in helping all people connect, celebrate traditions" and anything that detracts from that is "not who we are."

A company spokesperson previously said the ads were pulled in an effort to avoid controversy.

One Million Moms said it complained about the ads to Bill Abbott, CEO of Crown Media Family Networks, who allegedly told the group that the ads "aired in error."

"He reported the advertisement aired in error, but he was informed about it after hearing from concerned 1MM supporters," the organization said in a statement on its website. "The call to our office gave us the opportunity to also confirm the Hallmark Channel will continue to be a safe and family friendly network." 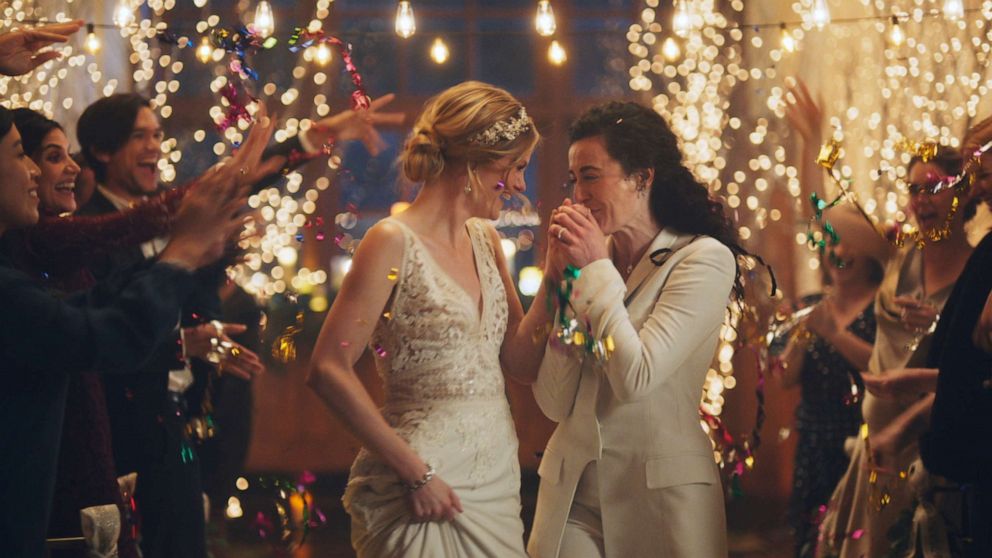 Zola via AP
This image made from undated video provided by Zola shows a scene of its advertisement. Under pressure from a conservative advocacy group, The Hallmark Channel has pulled the ads for wedding-planning website Zola that featured same-sex couples, including two brides kissing.

Hallmark previously confirmed that One Million Moms had complained about the ads, including the one that featured two brides kissing.

The company did not acknowledge the complaints in its statement Sunday, but said it would will always be "committed to diversity and inclusion – both in our workplace as well as the products and experiences we create."

"It is never Hallmark’s intention to be divisive or generate controversy. We are an inclusive company and have a track record to prove it. We have LGBTQ greeting cards and feature LGBTQ couples in commercials," the statement said.

It also said it would be partnering with LGBTQ advocacy group GLAAD "to better represent the LGBTQ community across our portfolio of brands." It also plans to reestablish its partnership with Zola and reinstate the commercials.

(MORE: Boy's relative left him on the road because he thought the boy was gay: Police)

Zola said in a statement, "We were deeply troubled when Hallmark rejected our commercials for featuring a lesbian couple celebrating their marriage, and are relieved to see that decision was reversed. We are humbled by everyone who showed support not only for Zola, but for all the LGBTQ couples and families who express their love on their wedding day, and every day."

The company said Sunday evening it had yet to hear from Hallmark, but would be in touch with the company.

"The Hallmark Channel’s decision to correct its mistake sends an important message to LGBTQ people and represents a major loss for fringe organizations, like One Million Moms, whose sole purpose is to hurt families like mine. LGBTQ people are, and will continue to be a part of advertisements and family programming and that will never change," GLAAD President and CEO Sarah Kate Ellis said in a statement Sunday.