The Supreme Court has a real opportunity this year to overturn Roe v. Wade, the landmark case that made abortion a federally protected right, or otherwise lessen the right to abortion.

The court will be hearing a case out of Mississippi, Dobbs v. Jackson Women’s Health, that asks the justices to directly reconsider the landmark precedent in Roe v. Wade and Planned Parenthood v. Casey, which many court watchers believe is closer to a possibility than ever with the current makeup of the court.

Should the court decide to overturn Roe, the right to abortion in the United States would be decided on a state-by-state basis. In that case, 26 states are "certain or likely" to ban abortion, according to a new report published Thursday by the Guttmacher Institute, a pro-abortion rights research organization.

The domino effect of that in the extreme, according to Guttmacher's report, would be that a person in Louisiana, where abortion would be banned, would have to drive 666 miles, one-way, on average to reach a provider. That's a 1,720% increase from an average Louisianan's current distance from a provider, which is 37 miles.

"Increases in driving distances would pose hurdles for many people," Dr. Herminia Palacio, president and CEO of the Guttmacher Institute, said in a statement. "However, research shows that some groups of people are disproportionately affected by abortion restrictions -- including those with low incomes, people of color, young people, LGBTQ individuals and people in many rural communities." 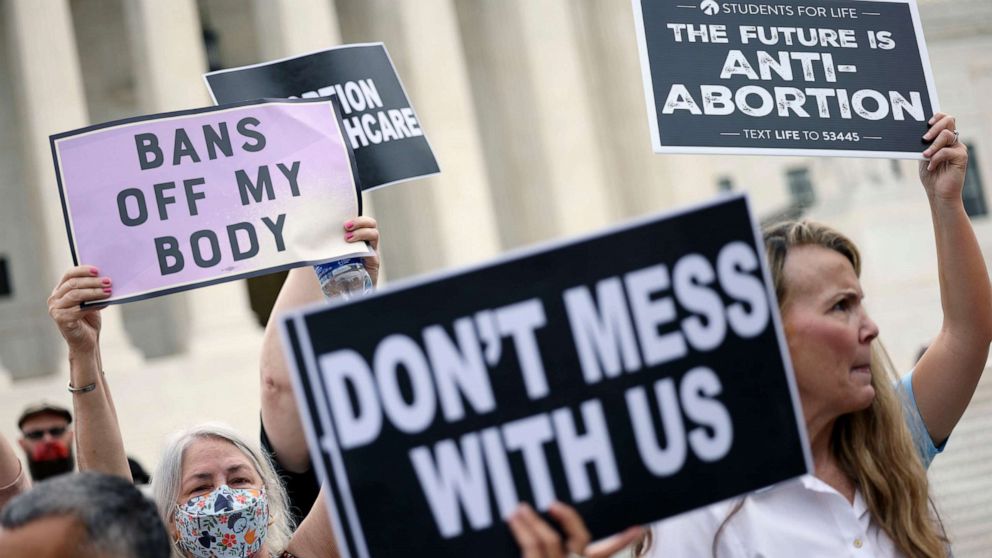 Kevin Dietsch/Getty Images, FILE
Pro-choice and anti-abortion activists protest alongside each other during a demonstration outside of the Supreme Court in Washington, Oct. 04, 2021.

Twenty-one states already have laws on the books that would immediately ban abortion if Roe were overturned. This comes in the form of laws that predate Roe but were never removed from the books, so-called "trigger" laws that would go into effect in the event of the precedent being overturned, state constitutional amendments, and six- or eight-week bans that are not currently in effect but would ban nearly all abortions.

Five states in addition to those 21 are likely to ban abortion should Roe be overturned, the Guttmacher report says.

MORE: 'My body is not their property': Texas woman's journey across state lines for an abortion

Those 26 states likely to ban abortion encompass a majority of the central United States, with the exception of Minnesota, Illinois, Kansas, Colorado and New Mexico. States on both coasts -- excluding South Carolina, Georgia and Florida -- are likely to keep abortion legal if Roe is overturned, according to the data. Guttmacher's full report, including its data set and an interactive map, is available here.

However, that doesn't mean people seeking abortions in states likely to keep the procedure legal would be unaffected. The Guttmacher report highlights that many of those states would become go-to destinations for people in states where abortion is banned. So a person seeking an abortion in Kansas could face a longer wait for an appointment because Kansas would be the nearest location for people from Texas, Oklahoma, Nebraska and other states to get an abortion. 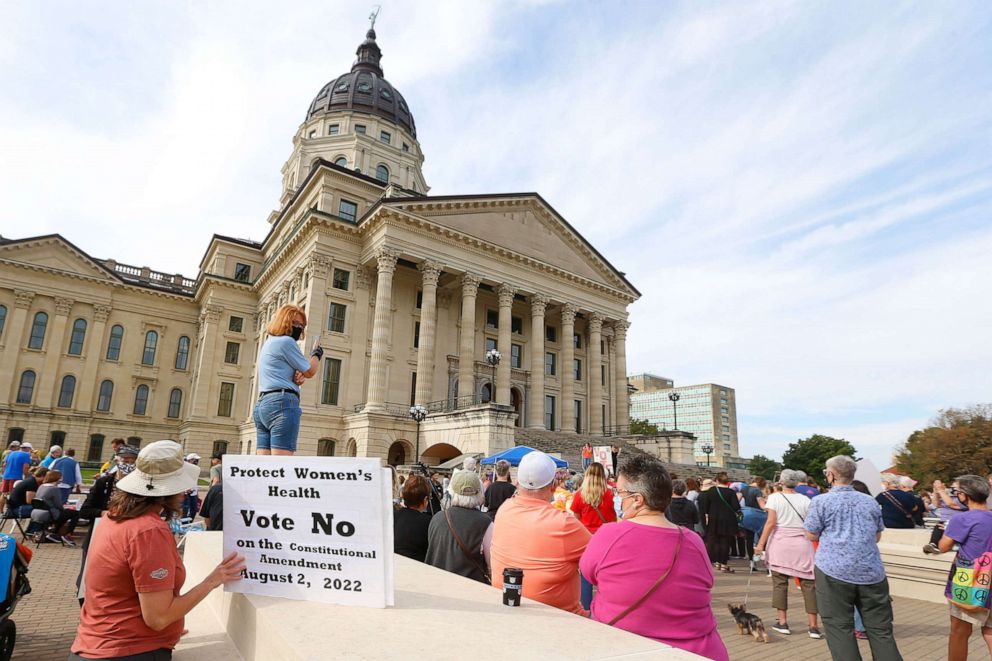 The Capital-Journal via USA Today Network, FILE
A women holds a sign asking voters to vote no on an upcoming amendment to the Kansas Constitution regarding abortion during Saturday's National Women's March in Topeka, Oct. 2, 2021.

This is already the case for people in Texas, where a near-total ban on abortion was allowed to go into effect in September. Since then, Texans have already traveled hundreds of miles to other states to obtain the procedure, as ABC News has documented. The Supreme Court is hearing a challenge to that law, focusing more on its enforcement mechanism than the right to abortion, next week.

The precedents of 1973's Roe and 1992's Casey encoded "the constitutionally protected liberty of the woman to decide to have an abortion before the fetus attains viability and to obtain it without undo interference from the State."

MORE: Supreme Court to take up Texas abortion law but declines to block it

"Viability" means a fetus can survive outside of a uterus, and that typically happens around 24 to 28 weeks. The Mississippi case the court is hearing in December is about a ban on abortion after 15 weeks. That is before viability, but after, say, the first trimester of a pregnancy.

The Guttmacher Institute report includes the impact if the right to abortion were still protected, but only up to 15 or 20 weeks.

According to the CDC's latest data, 92.2% of abortions were performed at or before 13 weeks, and only 1% were at or after 21 weeks.