The House of Representatives on Friday passed two measures to restore abortion rights after the Supreme Court's overturning of Roe v. Wade.

The action comes as Democrats ramp up their political messaging on abortion ahead of the November midterm elections, hoping the issue will drive voters to the ballot box to preserve the party's majorities in Congress.

"It's outrageous that 50 years later, women must again fight for our most basic rights against an extremist court and Republican Party," House Speaker Nancy Pelosi, D-Calif., said Friday in a press conference on the U.S. Capitol steps ahead of the vote.

"Democrats are honoring the basic truth: women's most intimate health decisions are her own," Pelosi added.

The first bill, titled the Women's Health Protection Act, would establish a statutory right for health care providers to provide, and patients to receive, abortion services. It would also prohibit states from imposing restrictions on abortion care.

The measure passed in a 219-to-210 vote. No Republicans voted in favor of the bill.

The Women's Health Protection Act now goes to the Senate, where it previously failed to move forward after the House first passed it in September 2021. 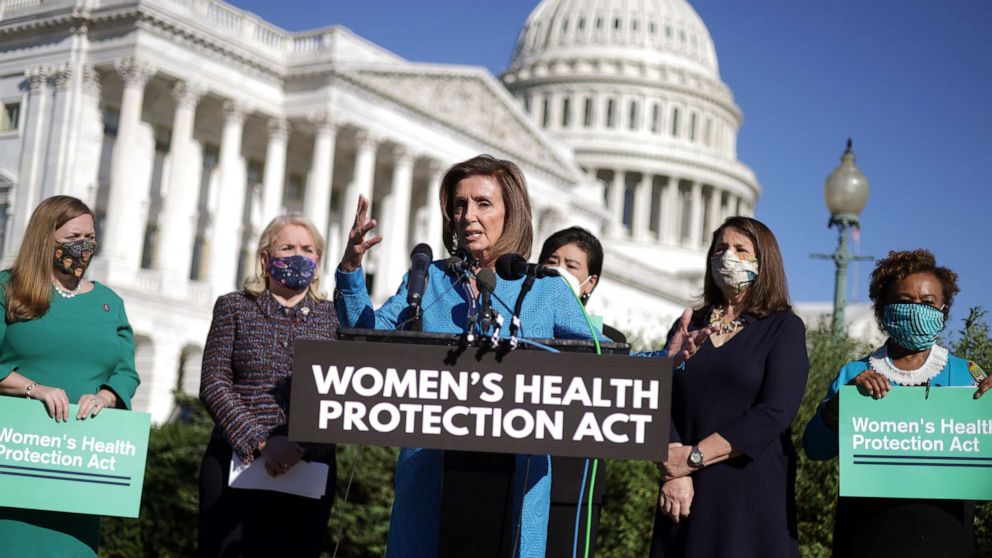 Any abortion-related legislation will likely meet a similar fate in the upper chamber, where Democrats need 10 Republican votes to overcome the 60-vote filibuster.

"We must ensure that the American people remember in November, because with two more Democratic senators, we will be able to eliminate the filibuster when it comes to a woman's right to choose and to make reproductive freedom the law of the land," Pelosi said Friday.

The second bill to pass the House, known as the Ensuring Access to Abortion Act, addresses recent efforts by state legislatures to punish Americans traveling for reproductive health care. The bill would would ensure no person acting under state law could prevent, restrict, or otherwise retaliate against a person traveling across state lines for lawful abortion services.

Senate Republicans on Thursday blocked a bill that would have both legally shielded the people who travel across states lines to receive an abortion and the providers who care for those patients.

MORE: Republicans block bill to shield people who travel out of state for abortions

"Are we going to allow these lawmakers to hold American citizens hostage in their own states, forcing them to give birth?" Senate Majority Whip Dick Durbin, D-Ill., said in a floor speech on Thursday. "Does that sound like the America that we know? No it doesn't, and we need to draw the line here and now."

Just last week, hundreds of abortion rights activists protested outside the White House calling on President Joe Biden to do more to ensure abortion rights. Biden signed an executive order on July 8 aimed at protecting access, but said it's ultimately up to Congress to codify Roe.

Biden's message to the demonstrators was to "keep protesting."

"Keep making your point. It's critically important," he said.