Vice President-elect Kamala Harris said elected officials in Washington need to “stop living in a bubble,” and come together to pass a stimulus bill for the millions of Americans suffering due to the COVID-19 pandemic.

“The moratoriums on evictions and foreclosures are about to end. The extension that people need of benefits is very real. And the people here in Washington, D.C., have got to stop living in a bubble,” she continued.

“The people have a right to expect that their leaders in Congress see them, and act in their best interest.”

Harris, still a member of Congress, moved one step closer to becoming vice president Monday night when the Electoral College voted to formally certify she and President-elect Joe Biden the winners of the 2020 election more than six weeks after Election Day.

"It started to really feel real,” Harris said of the certification. “I was watching it as the states were coming in with my husband. And we were watching it, and he looked at me, he said, 'See? It-- it's happening. It's really happening.'"

WORKING ACROSS THE AISLE

Since the certification, an increasing number of Republicans have begun to recognize Biden and Harris as the incoming administration, even as President Trump continues to refuse to concede the election.

“The Electoral College spoke to a very important principle in our country and in this democracy of ours as Americans, which is, our democracy is stronger than any one man or woman. It is about the people,” Harris said of Trump’s continued unwillingness to accept the results of the election even. 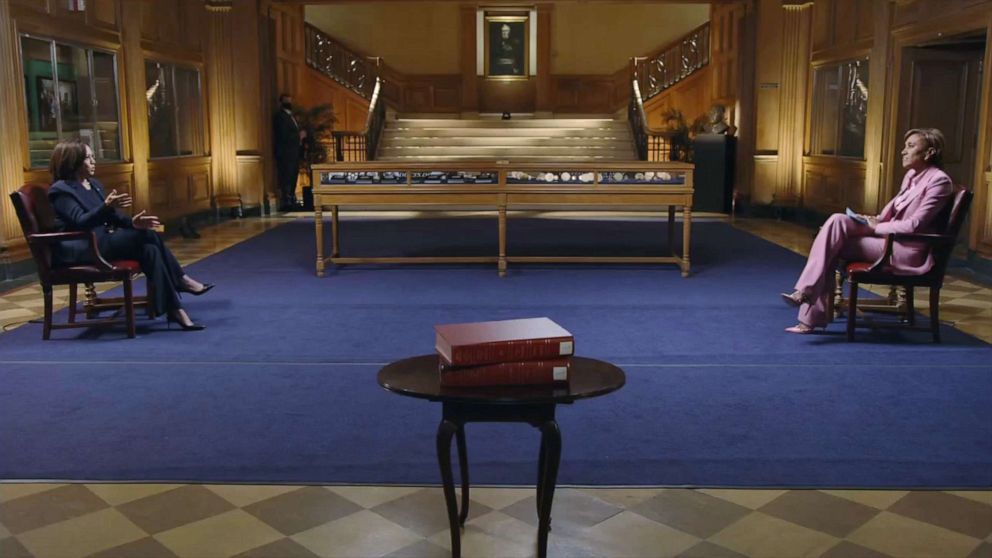 But even as members of the GOP begin to break with Trump, Biden and Harris will face the challenge of finding consensus while governing in the increasingly divided country --evidenced by the more than 60% of the House Republicans who joined the pro-Trump legal efforts to overturn the election’s outcome.

Biden and Harris also face the possibility of a divided Congress when they take office in January, as the balance of the Senate hangs on the Georgia special elections on Jan. 5.

Should Democrats win both seats, it would give Harris the power of a tie-breaking vote on critical administration efforts.

“If we are to get the things done that the American people want, like getting people back to work, reopening small businesses, supporting schools to reopen, investing in infrastructure, which is gonna be the creation of millions of jobs, investing in broadband... If we're able to do all of that, it's gonna be because Congress and our administration work together,” Harris said.

“I'd like to think that, regardless of who runs the majority, that everyone will approach it that way, but I also will say that, yes, those two seats in Georgia are critical.”

Perhaps the most pressing challenge the incoming Biden-Harris administration will face is distributing the newly approved COVID-19 vaccine across the country -- a vaccine both Biden and Harris have committed to taking.

Biden has been in touch with Dr. Anthony Fauci about the vaccine and has agreed to take it publicly-- something Fauci has urged should happen as soon as possible. 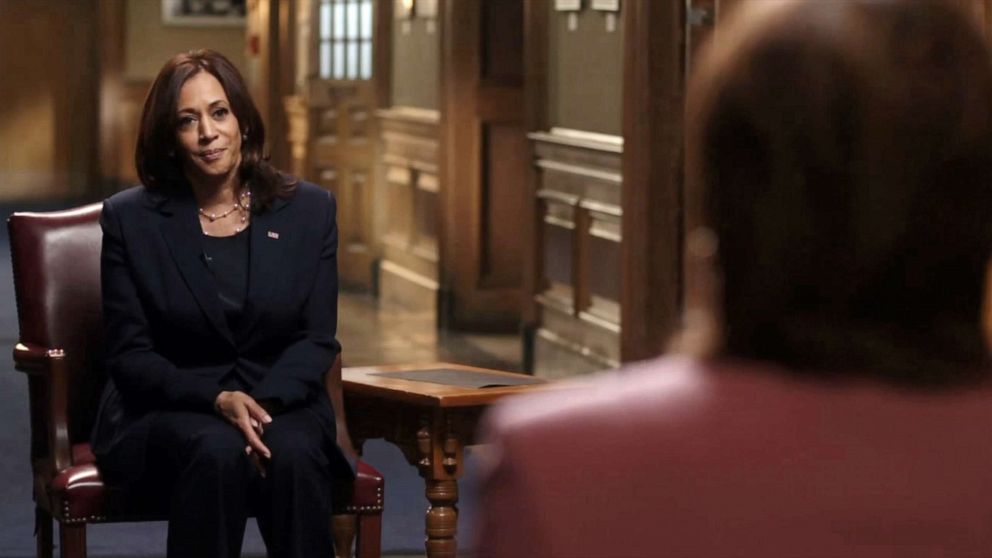 While Harris did not have a date for when she would be vaccinated, the vice president-elect said she would heed Fauci's advice and stressed the need to highlight trust in the vaccine for the American people, particularly in the African American community.

Harris also pointed to the Biden administration’s plans to focus on the disproportionate impact of COVID-19 on minorities with a racial disparities task force to ensure that the hardest-hit communities receive the support and resources they need to deal with the pandemic.

The incoming White House has laid out an ambitious plan for dealing with COVID-19 in the first 100 days of the administration, including distributing 100 million COVID-19 shots and calling for a 100-day mask mandate, which Harris stressed would not be punitive.

“There's no punishment, nobody-- they don't have to. But he is saying, as a leader, "Please, everybody work with me here. For the first 100 days, let's everybody just wear a mask and see-- and see the outcomes there." Because of course the scientists and the public health officials tell us there'll be really great outcomes if everyone does wear a mask when they're in public and outdoor,” Harris said.

But as the pandemic continues, many Americans, including some politicians, have grown fatigued with restrictions, even as the death toll from the virus surpassed 300,000 in the U.S.

“When you see leaders on both sides when it comes to the pandemic, they will put down strict guidelines. And even your colleague in California, strict guidelines, but yet they don't follow through. What kind of message does that send to the American public?” Roberts pressed.

“I think we all have to understand that right now, this is a moment for everyone to sacrifice. And-- if we're gonna get through this together as a country, then we all have to do it,” Harris replied.

COVID-19 will also take a prominent role in the historic inauguration of Biden and Harris, expected to go on but with a vastly different footprint than in years past. 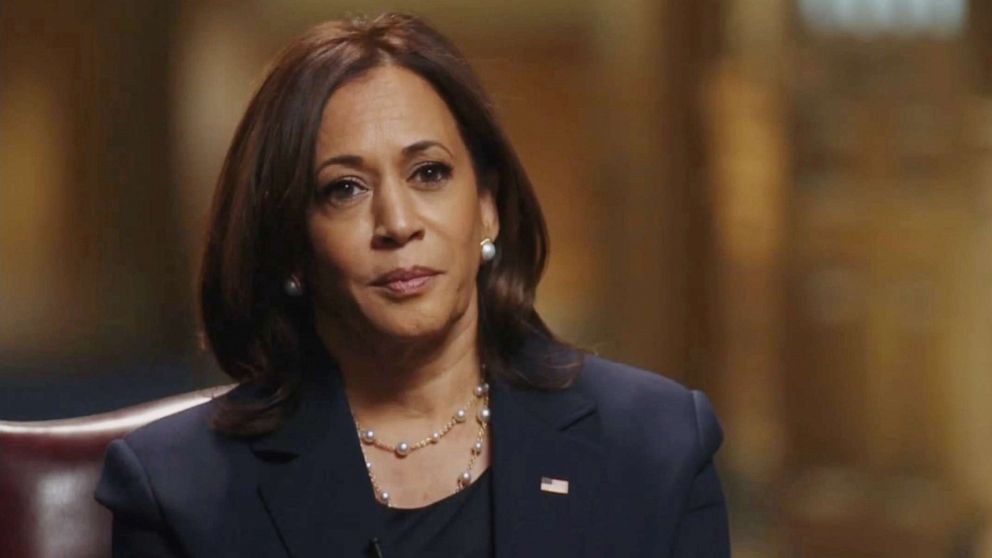 “It's gonna be very different than anything that we've witnessed before because of COVID. And we're gonna ask people to enjoy the moment from their homes. We're gonna, I think, do it very much like we did the convention and, you know, figure out a production in a way that people all over the country get to participate,” Harris said.

When she takes her oath of office, Harris will make history as the first female vice president, and the first African American and Asian American person to hold the office.

“I feel a very -- I don't want to say heavy weight in a way that it sounds like a burden. But I feel-- a very big sense of responsibility,” she added.

But Harris will not be the only person making history on Jan. 20 -- her husband, Doug Emhoff, will also take the unprecedented role of the first “second gentleman.”

“He's aware that you know, we still have so much work to do to remind our children of every gender that they should not be confined by the limited perception that some might have of who they are and what they can be,” Harris said of his role.

As she prepares to take the oath of office, Harris was asked how she would judge her history-making tenure as vice president.

“In four years from now, if you were to look back as your role as vice president. What will be your definition of success? Roberts asked.

"Joe and I were elected to do a job, which is to build back better and to fight for the best of who we are as a nation. And he and I as partners, if we are able to do that together, I think our country will be the better for it," Harris added.