A former adviser and close friend of first lady Melania Trump's is now blasting the entire Trump family as a callous clan tainted by "deceit" and "deception," and claiming she's still "working with investigators" to dig into potential financial crimes committed in connection with Donald Trump's inauguration in early 2017.

"It was amateur hour then, and it's amateur hour now, and I think it's really frightening for our country," Stephanie Winston Wolkoff said in an exclusive interview with ABC News's Linsey Davis, a day before the release of her new book, "Melania and Me: The Rise and Fall of My Friendship with the First Lady."

"Everyone does need to know what ... this presidency is doing and what this propaganda machine behind this man at the White House is doing," she added.

Winston Wolkoff refused to confirm or deny recent reports that she secretly recorded conversations with Melania Trump and even captured the first lady disparaging the president's older children. 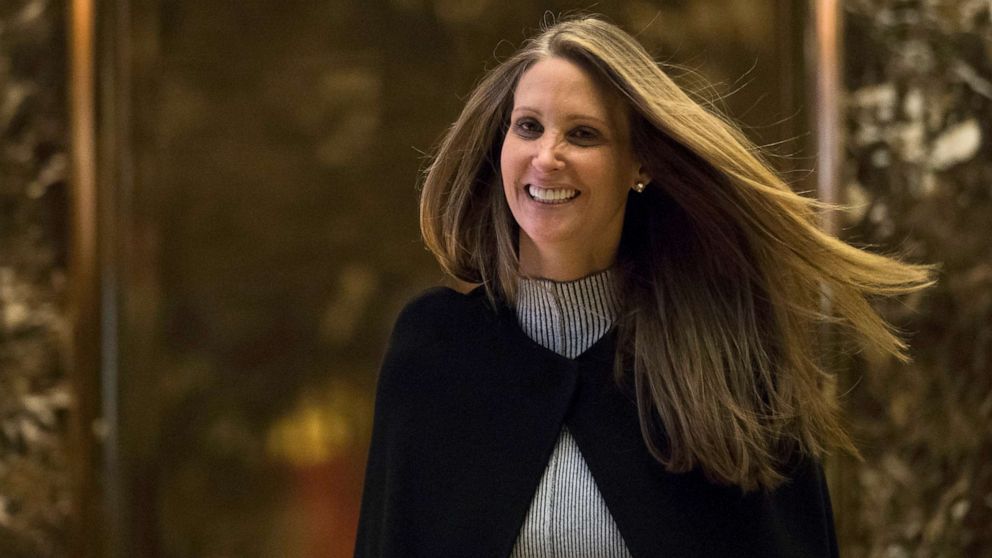 In her book, Winston Wolkoff wrote that Melania once described Ivanka Trump and family members working in the White House as a bunch of "snakes."

"I'm not going to comment on whether there's audio or not," Winston Wolkoff said. But, she insisted, "I can back up everything that's in the book 100% ... and Donald and Melania know that."

Stephanie Grisham, Melania Trump's chief of staff and spokeswoman, called Winston Wolkoff's book a collection of "mistruths" and "revenge" tactics, saying, "Anybody who secretly tapes their self-described best friend is, by definition, dishonest."

A longtime planner of gala events for Vogue magazine and clients of her own consulting firm, Winston Wolkoff said she counted Melania Trump as a close friend for more than a decade. In late 2016, she started working for the Trump team, first as a senior adviser to help "produce" Trump's inauguration and then, after the inauguration, as an unpaid adviser to Melania Trump.

Propelled at least in part by later comments from Winston Wolkoff about her time working on the inauguration, local and federal investigators began scrutinizing millions of dollars in allegedly excessive and inexplicable expenditures.

"I'm working with three different prosecutors, and it's taken over my life," she told ABC News, referring to the U.S. Attorney's Office in the Southern District of New York and local attorneys general in New Jersey and Washington, D.C.

She declined to provide ABC News with materials, including documents, to support any of the claims outlined in her book or interview.

Without responding to Winston Wolkoff's specific allegations, Trump's inaugural committee said in a statement to ABC News that it "disagrees with [her] description of this historic event," adding that it "will decline to engage in her effort to sell books." A White House spokesman similarly accused Winston Wolkoff of trying to "profit off lies and mischaracterizations meant to harm the First Family."

'Stabbed me in the back'

The inaugural committee, a private tax-exempt organization, raised nearly $107 million in donations and spent $104 million of that on the event, the most ever for an inauguration -- twice as much as President Barack Obama's first. The money not spent -- totaling about $3 million -- was reportedly donated to charity.

As Winston Wolkoff recalled, she was blindsided when, more than a year after the inauguration, The New York Times reported that Trump's inaugural committee had paid her event-planning firm more than $26 million, sparking headlines around the world suggesting she had personally pocketed all or much of that money.

Those unfair claims made her into "the cover girl for the inauguration shenanigans," she wrote in her book.

In fact, according to her account, $26 million was the total fee paid to a company she formed with two others to manage the inaugural planning. Almost all of that money was then transferred to an outside company hired to produce a series of inaugural events.

Of the remainder, $1.62 million was paid to Winston Wolkoff's personal firm, but -- after payments to the firm's employees -- she says she only received a fraction of that sum.

Winston Wolkoff said that for all of her Trump-associated efforts, including "three months of work -- 24 hours a day, seven days a week -- working on the presidential inauguration," she "made" $480,000. In the year after the inauguration, she worked as an unpaid adviser to Melania Trump at the White House, but that ended in February 2018. 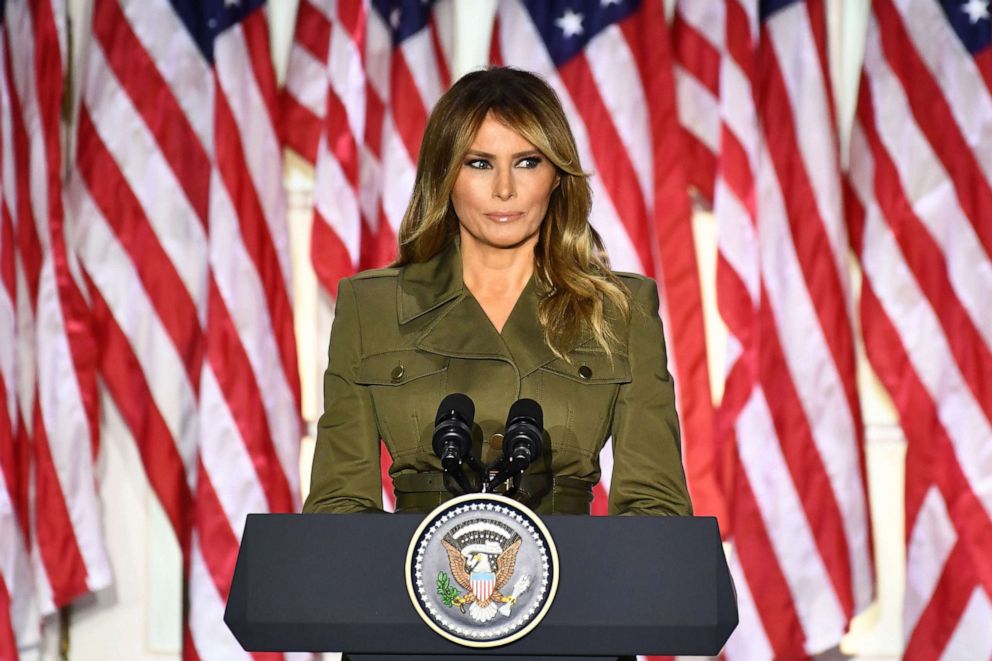 Brendan Smialowski/AFP via Getty Images
First lady Melania Trump addresses the Republican Convention during its second day from the Rose Garden of the White House, Aug. 25, 2020.

In her book, Winston Wolkoff said she was also dumbfounded by what Melania Trump's spokeswoman told the New York Times around the time of her departure: that "the first lady ‘had no involvement’ with the inaugural committee ‘and had no knowledge of how funds were spent.'"

That was "complete and utter horses--t!" Winston Wolkoff wrote, claiming that Melania Trump was deeply involved in inauguration planning and personally approved at least some expenditures.

"Melania knew it all, every detail, including who was screwing around [and] the type of salmon served at the Candlelight Dinner," according to the book.

In her interview with ABC News, Winston Wolkoff she said she "begged" the first lady to publicly make clear that she did not personally receive anywhere close to $26 million and that Melania Trump had known about the inaugural expenditures.

"[But] when the time came for her to come and speak the truth about a friend who left everything behind to help her, she turned her back on me ... stabbed me in the back," she said.

The first lady's spokeswoman pushed back, saying Winston Wolkoff's book is "clearly based on some imagined need for revenge."

"[She] builds herself up while belittling and blaming everyone she worked with, yet she still managed to play the victim," Grisham said in a statement.

According to Winston Wolkoff, after her plea for public support, White House officials told Melania Trump to remain silent because "there were going to be possible investigations into the presidential inauguration financing."

Indeed, multiple investigations ensued, at least partly because of Winston Wolkoff herself.

'The question everyone should be asking'

In the wake of the The New York Times' reporting in 2018, Winston Wolkoff tearily confided in Donald Trump's then-personal attorney, Michael Cohen, about the inaugural committee's activities. Cohen secretly recorded the conversation, and the recording was seized by the FBI as part of its investigation into Cohen's unrelated conduct, according to Winston Wolkoff's account.

The recording offered federal authorities at least one new angle to pursue.

According to Winston Wolkoff, she started to realize there could be a problem with the committee's expenditures "when I saw that a tree you could buy for $10 was $1,000, or a stage that would cost $100,000 was $1 million."

"There were a lot of different people involved," she said.

In January, the attorney general for the District of Columbia filed a lawsuit that alleges the inaugural committee spent more than $1 million at the Trump International Hotel as part of a scheme "to enrich the Trump family."

In a statement at the time, Attorney General Karl Racine said his investigation found that Winston Wolkoff had "raised concerns" about the pending expenditures beforehand with the president-elect himself as well as Ivanka Trump, but they ignored them.

The Justice Department has subpoenaed records from the inaugural committee, but it's unclear where ongoing federal investigations may stand.

The U.S. Attorney’s Office for the Southern District of New York declined to comment about its investigation, and Racine’s office would only acknowledge that Winston Wolkoff “provided documents” as part of her “cooperation” after being subpoenaed. The New Jersey attorney general's office did not respond to a request for comment.

An exasperated Winston Wolkoff told ABC News that -- while so much attention has focused on the money paid to the firm she cofounded -- the focus should be on how the rest of the nearly $107 million raised by the inaugural committee was spent.

"That's the question that everyone should be asking," she said.

Winston Wolkoff said she didn't have the final authority to approve most of the event’s expenditures, but she did acknowledge signing off on some steep items, including "$130,000 Tiffany crystal bowls" purchased as gifts for guests to an inaugural dinner hosted by Melania Trump.

Melania Trump approved the purchase of those bowls, according to Winston Wolkoff.

"We shared a lot over 15 years," Winston Wolkoff said of Melania, recalling how they first met in 2003 when she worked at Vogue, where the up-and-coming model "Melania Knauss" -- Trump's girlfriend at the time -- often would find herself.

In her interview with ABC News, as in her book, Winston Wolkoff described the Trump White House as a place riven with "palace intrigue" and "filled with friction, suspicion, deceit, deception."

Particularly chilly is the relationship between Melania Trump and her stepdaughter Ivanka, according to Winston Wolkoff, who quotes Melania calling Ivanka "the Princess." 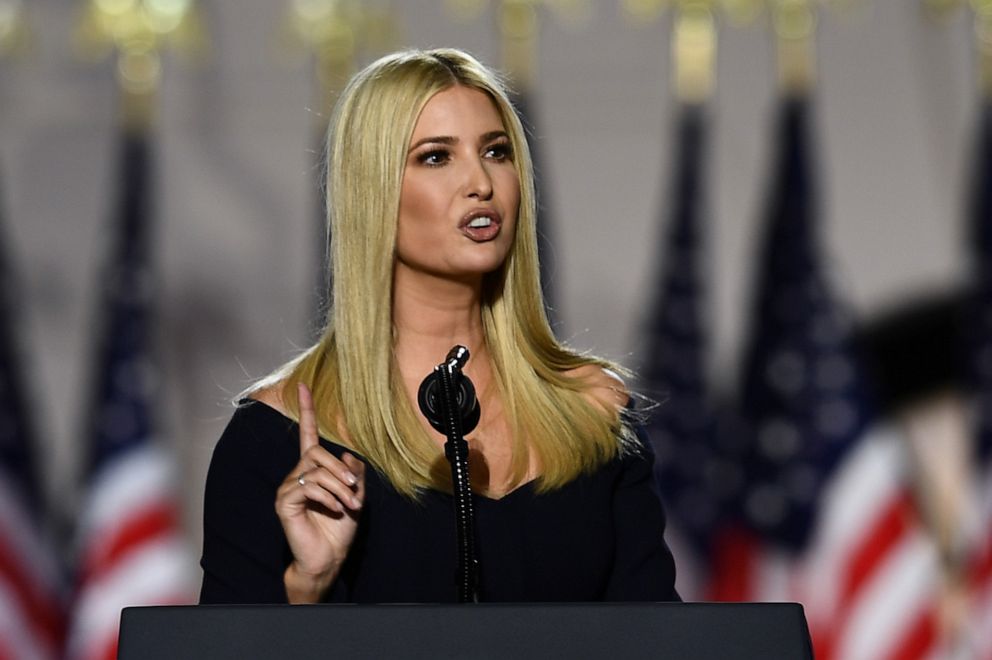 Brendan Smialowski/AFP via Getty Images
Ivanka Trump speaks during the final day of the Republican National Convention from the South Lawn of the White House, Aug. 27, 2020.

"Ivanka would never stop trying to muscle in on Melania’s events," and she was "relentless and driven" in her efforts, Winston Wolkoff wrote in her book.

Ivanka Trump also tried to "take over" offices in Melania Trump's part of the White House, Winston Wolkoff told ABC News, recalling how one day she started placing labels on office doors to prevent Ivanka Trump's team from trying to claim them.

"I pulled out a red Sharpie and yellow Post-Its ... and I just started marking up, 'communications,' 'chief of staff,'" she said.

A source close to Ivanka Trump insisted "those claims never happened," adding, "Ivanka never considered having an office in the East Wing."

Although Winston Wolkoff told ABC News she now feels totally "betrayed" by Melania Trump, she said she was always attracted to Melania's "strength" and "doesn't-matter-what-anybody-else-thinks" attitude.

"Her confidence exudes every day," and she "gives you that confidence," Winston Wolkoff said.

She recounted what she described as Melania Trump's bizarre reaction on the day -- a month before the 2016 election -- that news outlets began broadcasting behind-the-scenes recordings from "Access Hollywood" in which her husband gleefully spoke about sexually assaulting women.

Meeting Melania Trump for lunch that day, at her friend's request, Winston Wolkoff said she expected to find someone "in tears."

That wasn't the case.

"She was radiant, she was smiling," Winston Wolkoff said. "It was as if nothing happened."

"I said to her, 'How many times have you heard the words 'p----' and 'president' in the same sentence?' And we burst out laughing," she said, describing the outburst as tension relief. "She knows who she married. ... She knew what she was getting into, and so did he."

Winston Wolkoff emphasized that at the time of their lunch, she was not yet aware that other women would be accusing Donald Trump of sexual assault.

Spokespeople for the top two officials of the inaugural committee declined to comment for this article.