As family and friends of George Floyd flooded the streets of his hometown in Houston, Texas on Tuesday to spread a message of hope, the mother of his young daughter addressed the public for the first time since his death.

Although 6-year-old Gianna Floyd did not speak, her mother, Roxie Washington, and their attorney, Chris Stewart, talked about the impact that her father's death has had on the family and the community.

Floyd died on Memorial Day after a Minneapolis police officer arrested him and pushed his knee against his neck.

As Washington wiped away tears standing at the podium in Minneapolis City Hall Tuesday, she explained how much Floyd loved his daughter, and lamented over the fact he would not be there for the big moments in her life. 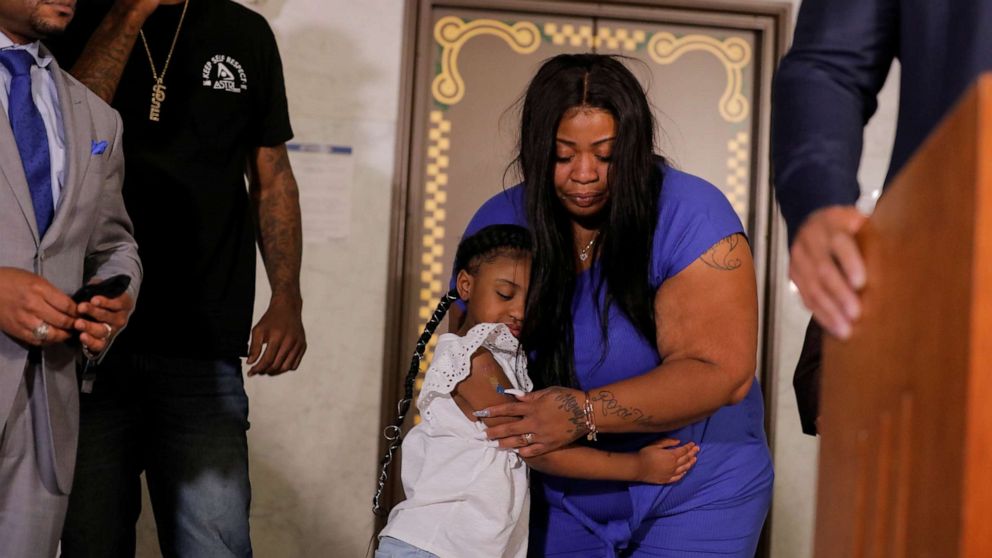 "If there's a problem and she needs her dad, she does not have that anymore," Washington said at the press conference. "I want justice for him. Because he was good -- and this is the proof that he was a good man," she added, referring to his daughter.

During a question and answer session, Washington was moved to tears and said, "He loved her so much."

She also said Floyd went to Minneapolis to find new work opportunities and take care of providing for his family.

"He still took care of us. He provided for us. He lived and he worked," she said. "He was a good man and father."

Stephen Jackson, a retired NBA player and close friend of Floyd, vowed to stand with his family until they get justice. He also promised Washington that he will be there to walk her daughter down the aisle one day, in honor of his friend. 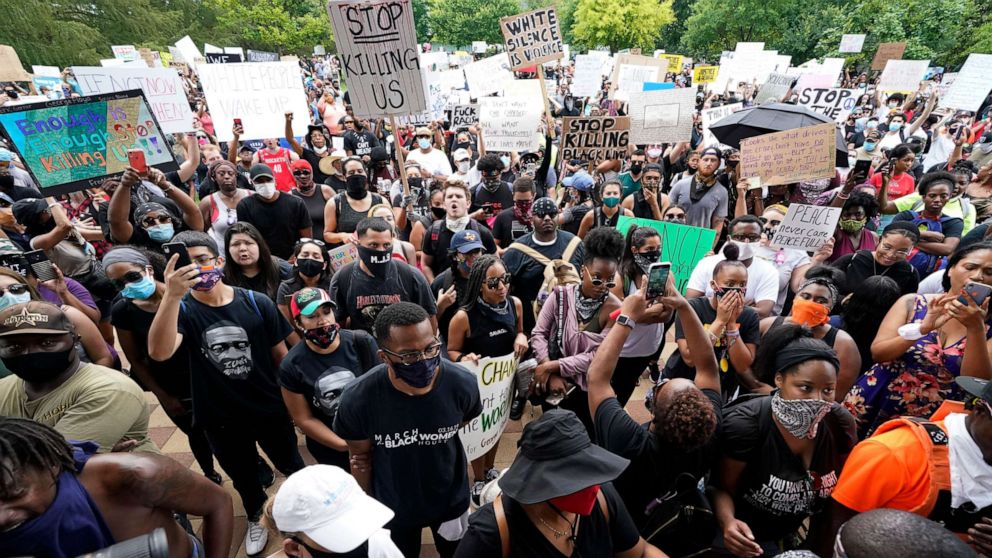 In Houston, over 60,000 people stood in solidarity, taking strides across George Floyd's former city on Tuesday to honor his memory.

"We want justice for Floyd and i'm a black mother and I heard his cry and it hurt me to my heart," Sonia Parker, a marcher told ABC News Houston station KTRK. "We want peace and justice, that's it."

Local rappers Bun B and Trae Tha Truth -- a longtime friend of Floyd -- helped organize the event that was also supported by city officials Tuesday.

"It's a beautiful moment we're making George proud, this is George's family here, we're making them proud to show how many people loved George," Truth told ABC News while marching through the street.

Terrence Floyd visited the makeshift memorial in Minneapolis one day earlier at the spot where his older brother took his last breath and made a plea for peace. 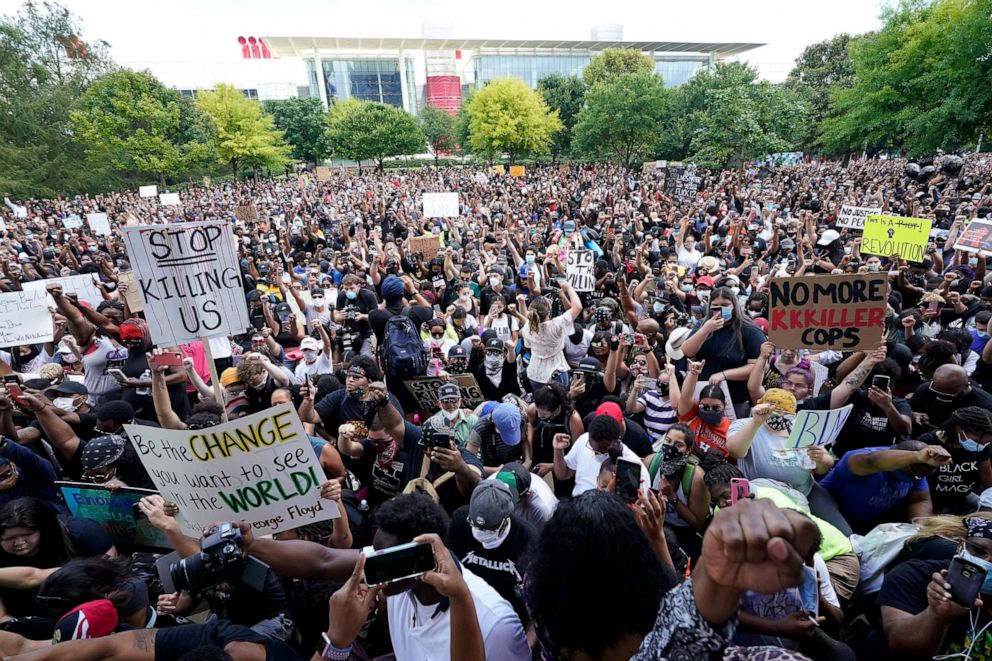 "Keep my brother's name ringing," he told the crowd Monday. "We're still gonna do this peacefully," he vowed.

Floyd was seen in his final moments on a bystander's now-viral cellphone video that showed former police officer Derek Chauvin kneeling on his neck, while Floyd repeatedly stated, "I can't breathe." Those words have become an anthem for the Black Lives Matter movement.

The former security guard was a child of Houston's third ward, where a new mural of Floyd now reads, "Forever breathing in our hearts."

Floyd's second grade teacher Dr. Waynel Sexton told KTRK that she dug up some of his old school work from Black History Month that could serve as an important message today. 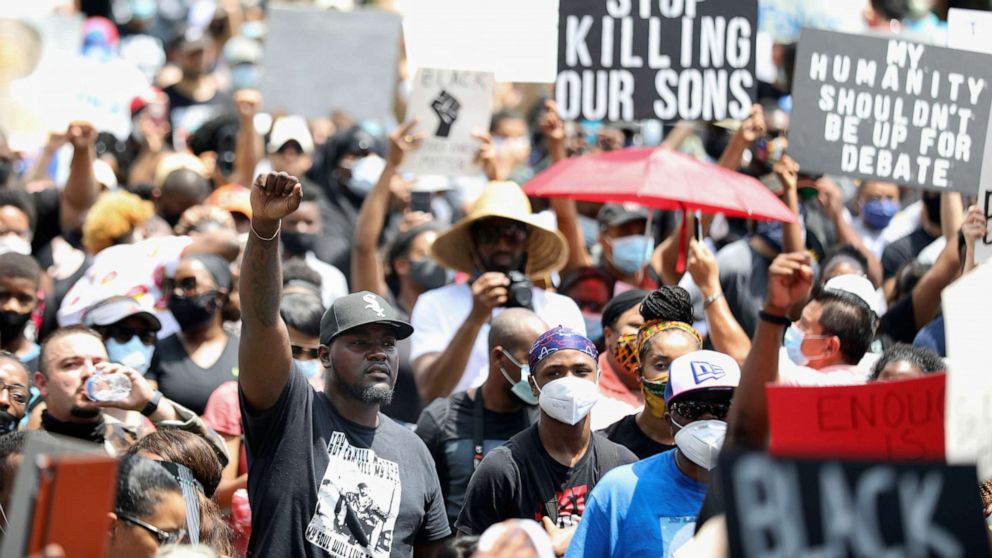 Sexton said that Floyd wrote that he wanted to be a Supreme Court Justice in a drawing of a judge and a jury.

"We have to teach our children now how to approach a police officer," the veteran teacher said. "I know many police officers are good men, but we have to do better."